You can find Sweetwater Brewing (this is the actual brewery) at 195 Ottley Dr NE
Atlanta, GA 30324. This is an industrial part accessed by the Armour Dr and Monroe exists from I85 access road, Northeast Expressway. It's a convoluted path that takes you down several streets but you'll know when you see the giant Sweetwater label on a brick tower that you've arrived. Parking is out front but it's difficult to find a space there - however there's plenty of overflow parking so expect a short walk. 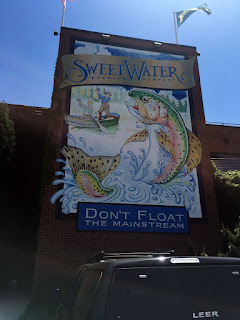 This is a huge facility with lots to explore, but in general there are five spaces: the reception area, the main pour room, a retail area where you can buy souvenirs, an event space overlooking the packaging facility, and an external patio complete with stage. I've recently attended several gatherings including the use of the event space so I'll describe them separately (this review is an aggregate of at least three visits, starting in summer 2016 and ending most recently on a May 2017 weekend). 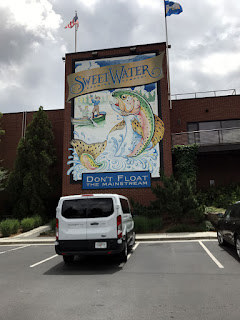 With so many recent local craft breweries popping up it's easy to forget Sweetwater, which I consider the first successful local craft brewery - these days their distribution (the Southeast and points North and West) is so large that many no longer think of them as a craft brewery - I think the concept survives in their seasonals and Dank Tank specials. Back in the day it was pretty much 420 and it's still an excellent standby, but to me it taste different with the Sweetwater IPA tasting closer to the original recipe (not sure if the recipe changed, the brewing methods have changed or my tastes have changed - more likely a bit of all three). 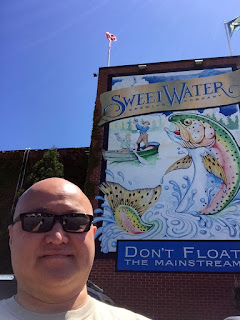 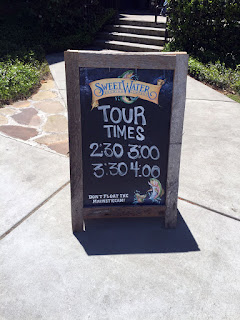 The entry to the facility features a huge Sweetwater label - make sure you take a selfie there so everyone on your Facebook and Twitter feeds can feel jealous. That's what it's all about after all. Once you finish that requirement, show your ID and come into the reception for your card. Depending on the year you'll also get a custom glass - one of the benefits of going to a brewery "tour" is to get a free glass to add to the collection but really it's all about the beer, and quite a deal getting 6 partial pours for the $10-15 (depending on where you are). Before going up the ramp make sure you take a gander at the beautiful Chihuly-like glass sculpture (you'll get to see it again from the top balcony). 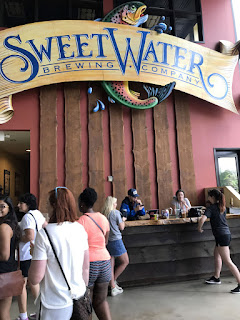 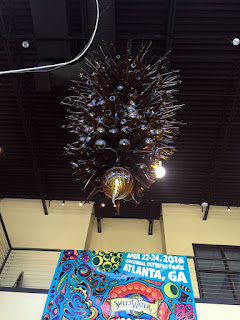 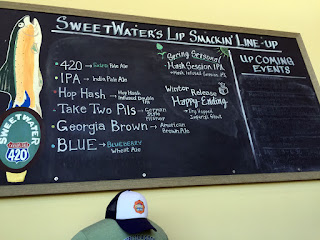 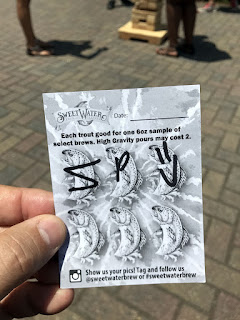 The entry into the main tasting room is to your right at the top of the ramp - you'll need to walk by the retail area where you can purchase souvenir T-shirts and the like. I normally don't spend any time there but I think you'll find a tie-dyed shirt or three that will tickle your fancy. The bar is on the left and wraps around down a long hall with additional taps. There's about 6 options at each group of taps - I think there are three groups. As the crowd starts getting think additional staff usually comes out to help so the lines move relatively quickly. You're supposed to get a 1/3rd pour but often it's fairly heavy so plenty of opportunity to taste the current selections. My standbys here are the 420, the IPA and just about any Dank Tank - I've tried most of the flavored beers and call me a snob, but I don't care for them (not particular to Sweetwater but to any brewery - I just rarely like the flavored ones). On this day my favorite was the Wookie On Down and from a previous visit, Happy Ending (more on these later). 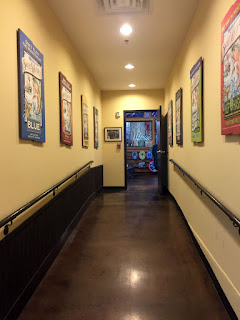 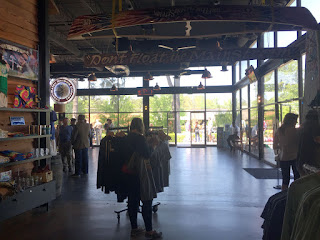 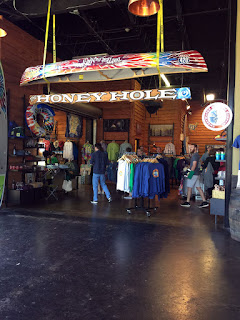 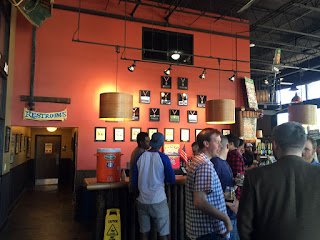 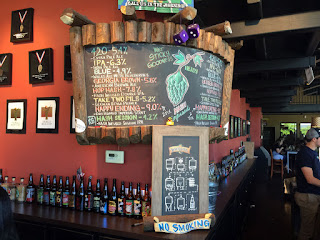 If you're here for an event there's a special event room towards the back of the building - I believe this is relatively new as the fixtures and interior showed little of the wear you see from so many visitors. The event room has windows that overlook the main bottling facility - if you're there during the week it's quite a sight to see with lots going on - the amount of activity is amazing. On the evening I attended it was for box.com so there were tables setup and catered food in the back. There was a Powerpoint shown on the wall which was a bit weak, but the service was very good and the beer refreshing. I stuck with the Bourbon Barrel Aged Imperial Stout and also tried the Old Johnson's Farm Imperial Stout with Rasperries (too fruity for me). 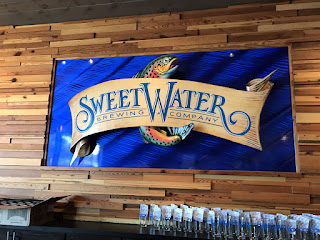 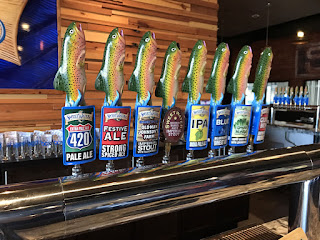 The fourth area worth seeing is the tour itself, where you're lead by a guide describing the process and seeing the "guts" of the business, so to speak. The facility is huge and the tour worth attending - make sure you fill your glass before it starts. 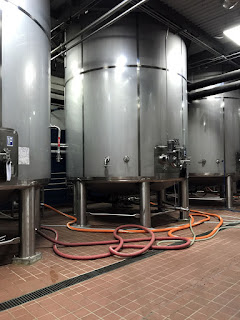 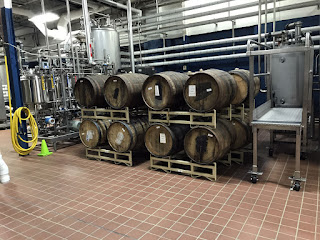 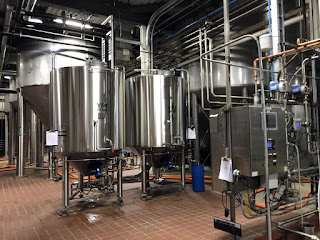 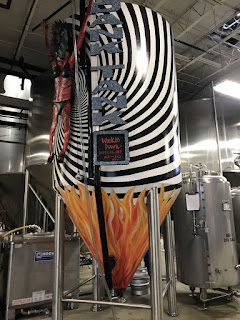 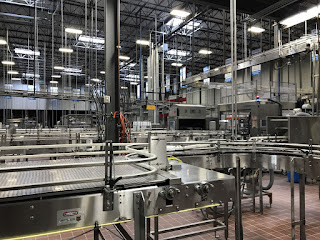 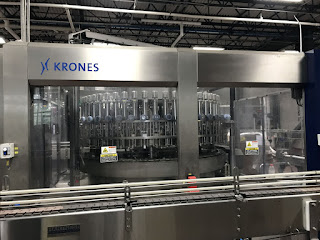 The final area is the patio - there's a stage on one end and on a previous weekend visit there was live music. It has a festive air and there's a few activities (giant jinga and cornhole) and some hammocks if your feel inclined. On very busy and hot days there's also staff pouring from counters outside so you don't have to walk back in. 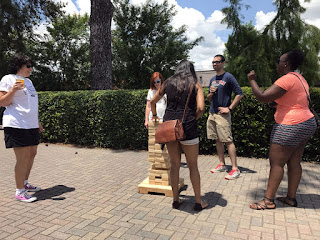 In all the staff here are way cool, very friendly and have little of the snobbish attitude you find at some breweries. Visitors are a mix of business people, students and locals - it's an awesome crowd.

Now for the beer - while sampling I like to use the Untapped app: 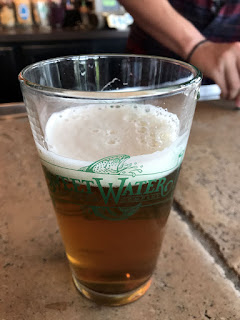 * Georgia Brown - American Brown Ale - 2/5 I really want to like brown ales but they tend to be a bit too sweet for me and this is no exception. 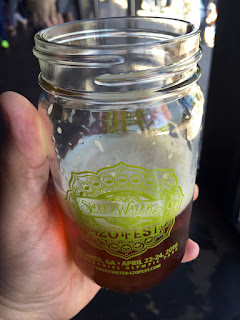 * Hop Hash - Hash Infused Double IPA - 4/5 awesome supper hoppy IPA with plenty of alcohol punch. I'd like to see this one as a regular but seems it's out of production (figures)
* Hash Session IPA - Hash Infused Session IPA  - 3/5 a lightweight version of the Hop Hash, very palatable. Think of this as something you'd drink cutting the grass in the heat - plenty of hops.
* Grass Monkey - 4/5 lots of citrus, especially lemon or lemon grass. Fairly lightweight and a great beer to accompany hot spicy food. 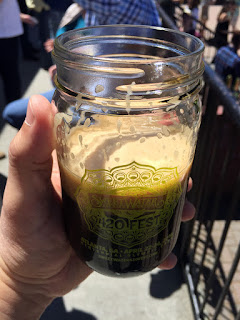 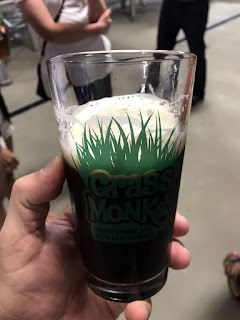 * Wookie Down - Imperial Red Ale - 4.5/5 Reddish dark ale with hints of citrus a malt. It doesn't get much better than this. 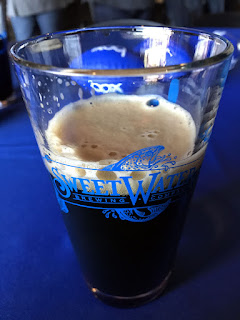 * Bourbon Barrel Aged Imperial Stout - 4/5 I do love me some stouts (this one is only available in winter or very early sprint). Hoppy, light chocolate and good alcohol taste all make for an excellent stout to me. 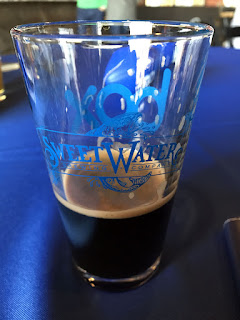 * Old Johnson's Farm Imperial Stout with Raspberries - 3/5 can't say that I care for this too much - the raspberries leave an aftertaste that works against the normally quite delicious coffee, chocolate, roasted barley and black malt.