You can find Hungry Ghost at 345 Edgewood Ave SE, Atlanta, GA 30312 in Sweet Auburn - the restaurant isn't marked very well from the exterior. Parking here basically sucks so you might just want to park somewhere along the Trolley line to the King Memorial and stop here for a bite. You also have Harold's next door and Noni's in the next building east so you can definitely get your snack on. 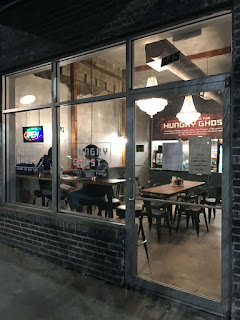 I came here with Michelle T and Arvin R after a CMYE at Eventide Brewery - this was a mid-week event and we wanted to basically fill our bellies with some dinner before heading home. The beauty of Yelp is that you can do a local search and see what comes up - Hungry Ghost looked interesting and there were some good reviews - it was listed as "Hot New Business" in the app. When you walk into Hungry Ghost you'll see a couple of picnic style tables, a counter where you can sit and a counter on the end where you can order. Behind you can see the kitchen and a couple of drink dispensers. 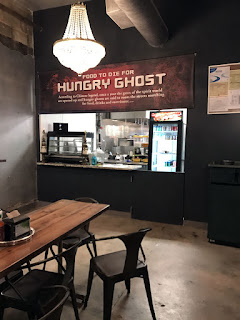 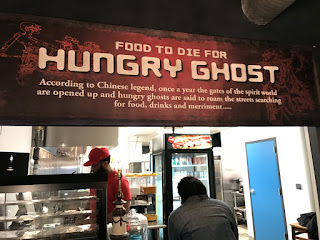 The menu is broken down into Snacks, Ramen Bowl, Burrito or Bibimbap, Banh Mi, Dessert and Drinks. In general there's a fusion mix of Asian including Japanese, Korean and Vietnamese plus Greek with a Lamb Gyro and a few other items thrown in for good measure. This seems to be a mix of Takorea and Ba Bellies with some smoked meats thrown in (found that out with the dishes themselves). 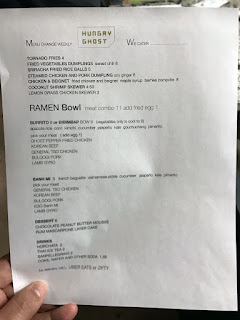 I usually try to get both an entree and app, but we had some bites as the CMYE so I ordered the Ramen Bowl meat combo for $11. This was an interesting ramen that overall had some good flavors, however I think Michelle put it best "It's good for what it is, but not for what it's supposed to be."). The good, is that it came with a lot of different ingredients and flavors including some smoked meats and cracklin. The problem with this bowl is that it's nowhere near as good as the ramen you get at Jinya or at other restaurants that are trying to be true to the traditional Japanese dish. The rather murky broth has some odd flavors going on and the noodles look like they came straight from an 18 cent ramen pack (the kind we all lived on while going to school). Real ramen fans know that it's more about the broth than anything else and this one, especially with the smoked meats, threw me off. Odd thing is that the smoked bits of meat I found in the bowl were very tasty but the flavor sullied the stock to me. 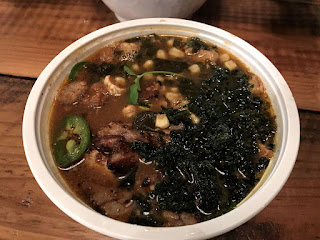 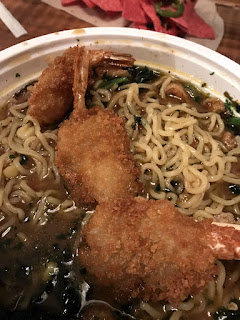 Michelle went with the Bibimbap bowl at $9 - epazote rice, corn, kimchi, cucumber, jalapeno, kale, gouchuchange, pimento - pick your meat. This looked really interesting and I tried a bit - tasty but as a Korean it too was a bit weird. I would have been fine with it but I think Michelle was thrown off a bit by it. 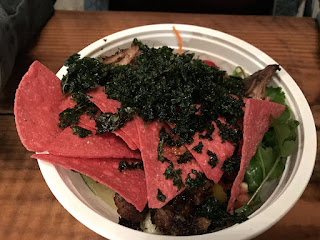 Arvin ordered a Ghost Pepper Fried Chicken burrito also at $9 (same ingredients as the Bibimbap bowl only in a wrap). This came in a long paper sleeve with a few chips on the end. This too was tasty and I could certainly see myself ordering one. I actually liked this dish the best of those that we tried. 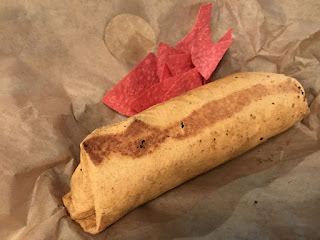 I also ordered a Thai Tea which I should have forwent, knowing not to trust it when it comes from a dispenser. I found it had a fake sweetness to it that you don't have when it's made with strong tea and condensed milk, poured over ice. 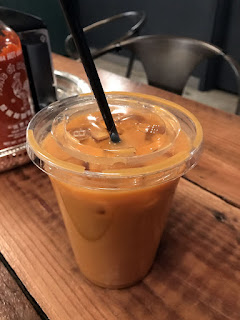 When we walked in I asked for some recommendations and the guy behind the counter asked if we were real hungry or looking to snack - he recommended the bowls if we were hungry and the portions were indeed quite large and filling. Oh and as already mentioned, no bathrooms unless they allow you to walk through the kitchen? 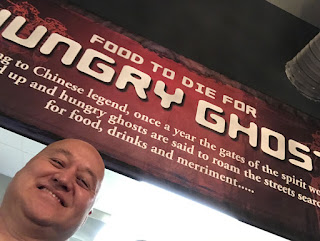 In all I think the restaurant is feeling its way through some new flavor combinations as it strives to find a unique identity - I do love the name and the sentiment on the sign above the counter. As for the food, I think that it might be trying a little too hard. I'd rather see more basic dishes with an assortment of oshinko and panchan style pickles served with the smokier dishes (the acid would cut the fat and smokiness a bit and provide some balance). I'd also like to see some stewed veggies like some peppery greens as options as everything seemed very fried, but that's just me. Overall not bad but not quite there yet - I'll be interesting to see how this restaurant evolves.