You can find Curries Indian Bistro at 6115 Peachtree Dunwoody Rd, Sandy Springs, GA 30328 - this is the shopping center across from the Publix that also has Uncle Julio's with lots of construction going on (corner of Peachtree Dunwoody and Hammond). Parking is out front and there's plenty, but the lot does get busy so you may have to walk a bit. There are also many reserved spaces so be aware of where you park as the tow trucks can be rather aggressive in this area. 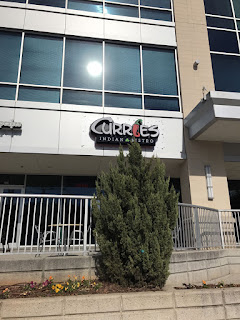 This was the former location of Figo Pasta which I've tried on several occasions - honestly, I'm not very surprised that Figo is gone - I always thought the food and service a bit lacking. Fortunately Curries Indian Bistro back-filled the space with new things to try - Curries at this point has been opened about a week and was suggested by my friend Sid S (who is featured in many of my reviews and has been a constant lunch and traveling companion as we work in the same group). Also included were Arvin R and Greg P who are also in my office and good dining companions.We arrived at lunch to a mostly empty dining room which still have the interior features of the old Figo - a bit industrial but very clean lines, with a touch of Mediterranean that still works with an Indian concept. The restaurant is so new that the door still has a paper sign (however the main overhead has been installed). 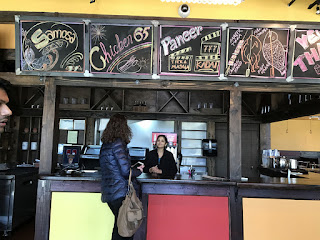 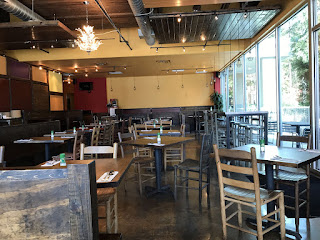 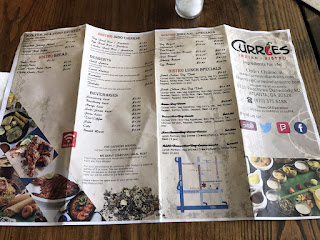 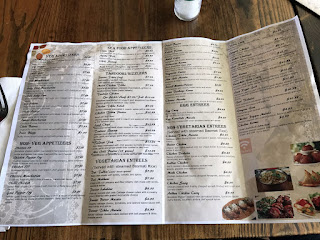 We started with a Cut Mirchi (6 pieces) appetizer - Green pepper dipped in chickpea batter and deep-fried served then cut into small pieces. This amounted to two plump green peppers (tasted like jalapeno but may have been something milder as it wasn't very hot) cut into three pieces each. I liked this quite a bit and have enjoyed it as a chat at other restaurants. I thought this good and blazing hot (temperature) and just enough to get things going. 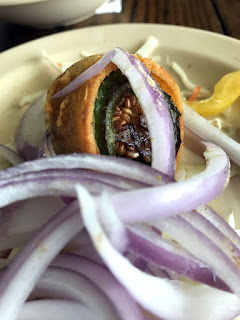 Sid went with the lunch special South Indian Veg Thali which included Veg Appetizer, Veg Curry, Veg Fry, Sambar, Rasam, White rice, Plain Yogurn, Pickle, Salad, Dessert, Pappadum and Naan. One veg selection used tindoora - this is only the second time I've seen this in Atlanta. It also had drumstick - not my favorite as I think it's too much effort to eat but still interesting to see it used outside of the sambar. 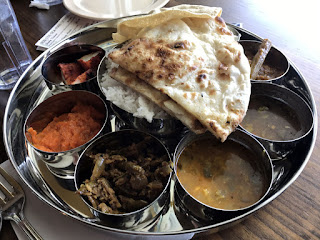 Greg ordered the Kadhai Chicken - North western chicken delicacy cooked with onions, peppers and northern spices. He liked this quite a bit - for me it had a bit of oiliness that you often see with North-Western Indian and Pakistani cuisine - also I tend to stick with the spicier (hotter) dishes and I think I would have gone with the Vindaloo as I like to use it as a measuring stick to compare how the flavors and heat are applied. 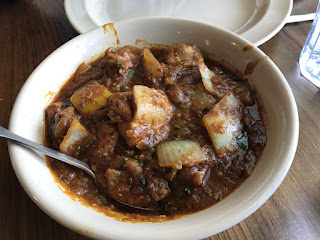 Arvin ordered the Hyderabadi Chicken Biryani -  which we both thought very good - the flavors were very distinct and the chicken perfectly melded into the rice - this version was bone-in - they also offer a boneless version. 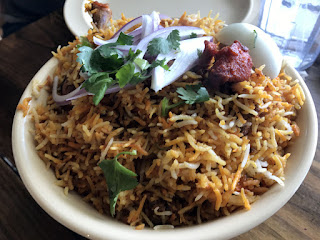 Since everyone seemed to order something that I would probably have ordered, I went with the Tandoori Mix Grill Platter (10 pieces) - combination of tandoori in a combo served with rice/naan.  This was just downright delicious with perfectly cooked skewered meat slathered with various curds and spices. Of particular delight were the lamb chops - everyone who tried these agreed that they were something special and it didn't take me long the finish off the whole pile. 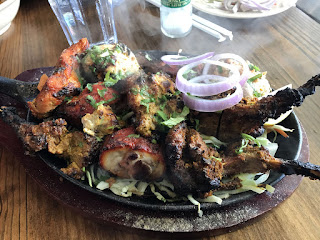 The only negative to the whole experience was the delay in receiving the food - two dishes arrived and it was about five minutes before the next dish, then another few minutes for the final dish - the food was worth it but you might want to distribute the food and expect this to happen. Also, the raita didn't appear until about have the biryani was eaten and the naan that was supposed to come with the Tandoori platter - I had to ask for it a few times. Once it arrived it was piping hot and quite delicious. I chalk up this last to the restaurant being so new and not quite together as far as service. The people here are quite kind and interested in making your meal a success - I think they need a little time to get the formula right but for only being opened a week I think they are doing well.