You can find The Barn Smokehouse at 5364 Lawrenceville Hwy, Lilburn, GA 30047. Those of you paying attention will recognize the address as the location of the original Spiced Right BBQ, which changed owners and eventually became this new business, The Barn. Parking is in the lot next to the building which is hard to miss, as the main covered deck is painted red like a barn (makes sense, no?). 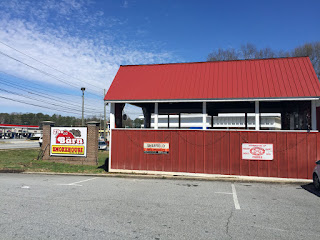 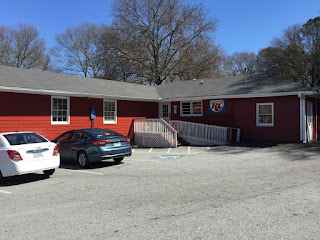 The interior of The Barn Smokehouse is much as it was previously as Spiced Right so maybe now is the time to talk about that previous business. Spiced Right was one of my favorite BBQ places due to the all-you-can-eat pulled-pork buffet - I used to visit several times a month and while some of the other items on the buffet (like the hot dogs?) weren't worthwhile, the pulled-park was awesome, especially with a bit of the Lilburner sauce (hot, vinegary). At some point the buffet went away but I would still visit occasionally to have the ribs - which have been pretty much retained in the Roswell location (still open). I believe the family just got tired of having the Lilburn business and sold it where it remained Spice Right until The Barn took over. 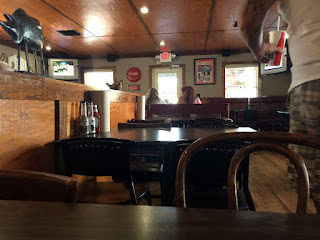 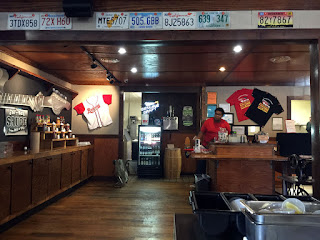 The menu for The Barn is exactly what I like to see on a BBQ menu, mostly meats by the pound, as plates or sandwiches with just a few sides. I think to make good Que the business should stay focused and this menu indeed accomplishes this. You'll see options for Pulled Pork, Ribs, Brisket, Smoked Turkey & Chicken, Combos, a Quick Lunch (sandwich, chips and drink), Family Style (combos of meats and sides), Side Items, Kids Meal, Desserts and Beverages including beer by the bottle - I thought all the prices were very reasonable. You order at the counter from a very helpful guy who can answer some fairly detailed questions. Go for a combo platter - there's a ton of food, you'll be able to sample a lot and still have a bit to take home for later and lets face it, BBQ is too good to go to waste so just accept that you'll want to take some home. 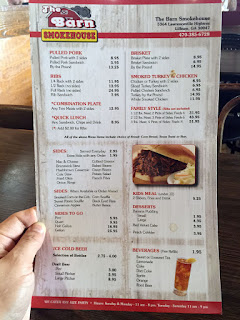 I order the two-meat combo with ribs, pulled pork and two sides including collard greens and Brunswick stew - all for $14.95 ($2 up charge for the ribs). The ribs were super-tender with just a bit of caramelized sauce, meaty and about 1/8 inch of rind. Personally I like a bit more rind (which is where the smoky-flavor comes in) but these were very satisfying and I think most would like them. The pulled pork was also juicy with just a bit of rub and a little more rind. As with the ribs, not as smoking as I like but still very good and I know that most of my friends wouldn't complain. The Collards were good (made with smoked turkey I believe). I liked the flavors of the Brunswick stew but the corn was a bit under-cooked otherwise good. In all it was a ton of food and I left stuffed. 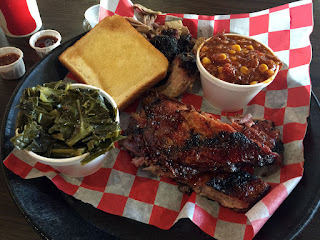 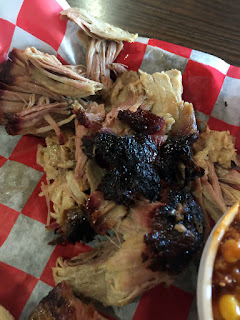 For sauces, there's a whole array on one of the counters, plus their basic sweet sauce on the table - I liked the "The Bite" which is hot but not blazing, and the "Hot n/ Spicy" which I believe is "The Bite" mixed with one of their other sauces. Really my favorite are the vinegary sauces that are hot-and-spicy and I didn't see that offered (but may have missed it as some people dining had taken bottles to their tables). 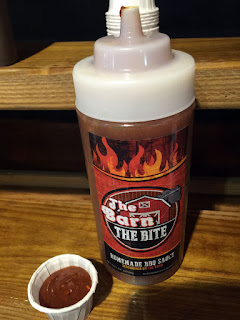 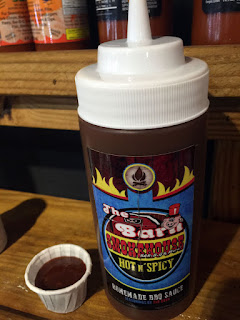 In all I thought the food very good and the people working there very nice. I'll be returning to sample the other items. I think that while The Barn doesn't have the history of Spiced Right, it's a good replacement for that venerable establishment.