You can find Spice Bistro at 2857 Buford Hwy, Brookhaven GA 30329 in the Suntan Shopping Center just North of Peachtree Creek and West Druid Hills Dr - the same shopping center that currently hosts Little Szechuan. Parking is on the tilted lot out front (bit of a hill) - it can get rather hectic so be prepared to wait for a space. 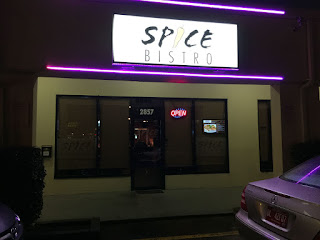 I had no expectations coming to Spice Bistro - this was to meet up with my regular Buford Hwy Restaurant Crawl group hosted by John F. I got there just before 8:00 PM with two others from the group already there - we finally ended up with a table of about 7-8 people, looked over the menu and ordered drinks. The menu has your typical Caribbean and occasional African options you would normally see in Atlanta Caribbean restaurants. The Chef/Owner? (not sure but he had a chef's coat and stood behind the bar - he also took our order on this sleepy Thursday evening). 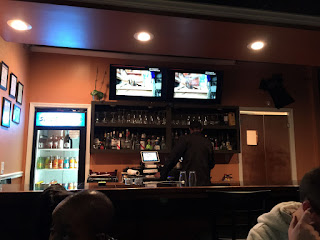 The menu has a lot of options with the most common theme of spicy food - mostly Caribbean with some unusual items like Breakfast (Bagels, Croissants, Muffins, Eggs, Ackee and Salftfish, Yam and Egg Stew, etc.). There were also Sandwichs, a short Kids menu, Appetizers including Suya Kebab Sticks, Salads, Some interesting Islander Entrees (Oxtails!) with Jambalaya, Jerk Chicken and Pounded Yam (sounds interesting, no?). Seems they also cater. 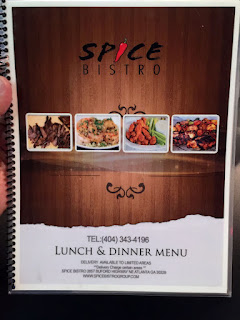 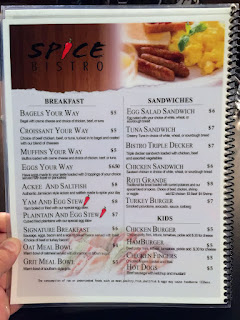 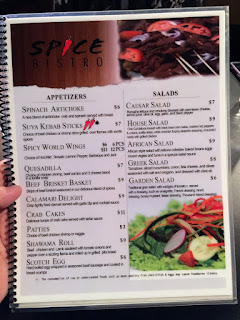 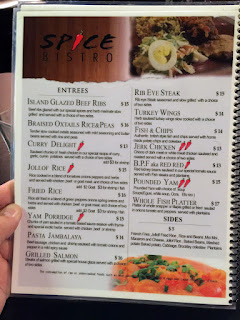 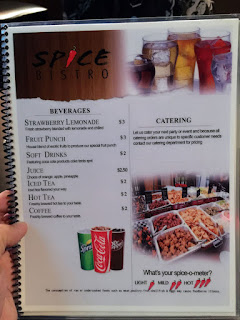 The restaurant is on the smallish slide with banquets along the right and tables in the middle. There's a tiny bar at the very end with some liquor options and a cooler housing a few dozen beers of various types. There are TVs hung high along all walls blasting the same Islander music videos (well produced rap, Caribbean or African renditions of some English songs or original music, mostly in French or some patois). There were 4 or so people basically hanging around along the edges that would occasionally leave to answer a phone call to return after a few minutes. While we were there a group of well dressed men and one woman entered and hung around, presumably until we were finished and the real party began (we guessed that the restaurant turns into a night club after dinner hours and the clientele seemed to support that idea - fairly common along some of these ethnic restaurants on BufHwy). 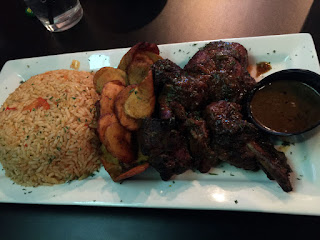 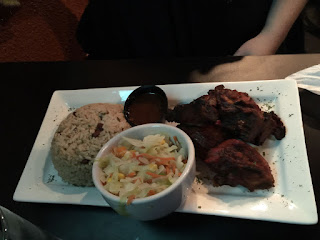 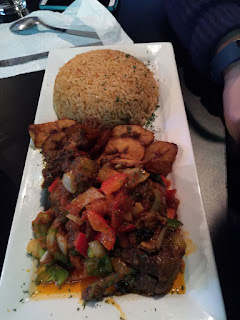 We ordered our food and waited. And waited. And Waited. Around 9:30 PM we started receiving plates -  some hot, some not so hot. I ordered some extra spicy jerk chicken with rice and peas and slaw. The rice and peas I thought pretty bland, the jerk was tasty but hardly any meat on the bones and the slaw was something I'd rather not talk about  (except to say it was some of the worst I'd ever had). Others at the table ordered a variety of items from the menu but nothing too special. I think by the time we got the food it was so late we didn't bother to complain, just ate what we could and left. 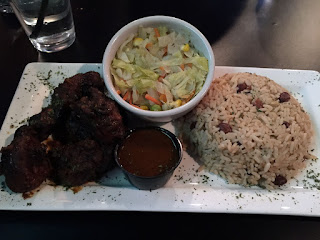 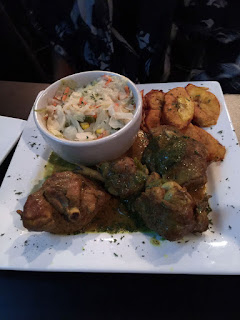 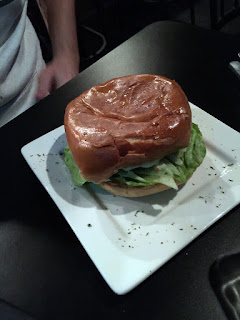 The funny thing is that the guy with the chef jacket was actually pretty nice and accommodating. The food took so long I speculated that they called up another Caribbean restaurant then sent someone to go pick it up (probably not true but from the crummy sides that may have worked better for them). I think they really weren't expecting us to come and order food or something? Who knows but they were very ill prepared to service a table, especially one this late in the evening and as large as our party (not that it was that large - who knows?).

Normally this experience would have rated 1/5 stars but I'm rounding up as the guy who waited on use seem to genuinely care.