Orpheus Brewing is located at 1440 Dutch Valley PI NE, Atlanta, GA 30324 in the very popular Morningside neighborhood sort of between Virginia-Highlands and Ansley Mall. You access via Monroe Dr traveling south from Ansley Mall to find Dutch Valley Pl - this is not a really obvious location for a brewery as it's tucked towards the back of the street that ends right on the Beltline. Actually it might be easier to find on the Beltline as the side of the building has the Orpheus logo prominently displayed to that avenue - you'll need to look up the hill. Parking is in adjoining lots or along the street - there's usually a white sign that shows where you can park for free in various locations. 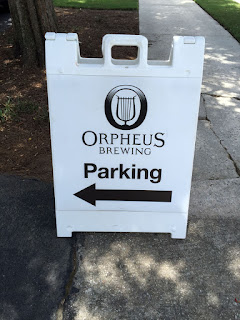 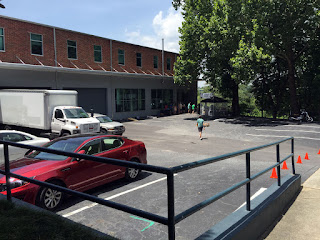 I do love breweries and Orpheus is no exception. This is a fun, industrial location a bit off the beaten path on a short industrial avenue. The neighborhood is filled with those classic bungalow-ish houses you see on intown streets, plus these straight-sided warehouse-looking businesses that almost look out-of-place but at the same time have been here so long they impart much of the area's character. Once you find a place to park walk down to the brewery - you'll have to navigate past people hanging out outside (and if you're lucky, eating from the little food stand - which was offering hotdogs on this day). 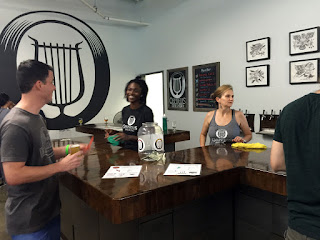 Orpheus Brewing has been around for a while but until sometime last year I hadn't heard much about them. It was while visiting the very good YourPie in Sandy Springs that I encountered the Transmigration of Souls and went "Wow!" that something like that was made locally floored me. Needless to say I was anxious to check out the brewery solely based on that amazing double IPA. At this place you pay for a few tickets and you get a take-home glass (I now have the pint given to me at YourPie and this little stemmed beer glass from the visit). Note that the law has changed since my visit and breweries can now sell beer directly to the public so this process may have changed. The people at the counter are quite friendly and the people pouring beer are awesome. 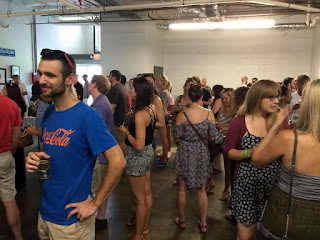 Now some observations - maybe it's just me but this place seemed to be a hipster hangout? Many bearded Millennials wandering around in T-shirts and flip-flops but hey, who am I to judge? I'm often urban-exploring in T-shirt-and-shorts or jeans myself and I can overlook the snobbish critique overheard from the obvious beer-nerd as I wonder the crowds. Besides, if I was single I would come here every day - amazing number of female saison fanatics tasting those piquant sours and related flavors that Orpheus is known for. Not that this is a pick-up place? but plenty of eye-candy wondering this floor on the weekend. There's also a deck out the back that allows you to get in some rays and overlook the people wondering the Beltline - it's right down the hill as indicated previously. 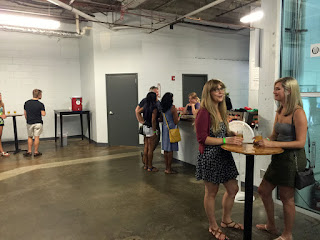 On to the beer - as I've already stated, there's a favorite:

* Transmigration of Souls - this double IPA has everything I look for in a great beer - awesome hoppy flavor with citrus nuances and a depth you don't normally experience, and at 10% ABV it packs quite a wallop without overpowering your senses with an obnoxious alcohol hit. This is an amazing beer. Unfortunately, when we arrived they were already out - thus I got a stemmed beer glass and a handful of tickets to use on something else... 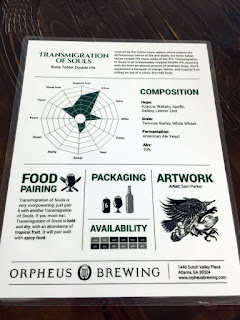 * Atalanta - this tart plumb saisson is rather acidic and dry - it's also outside of my preferred  flavor profiles - that didn't stop me from having a glass and I could tell it was quite popular. 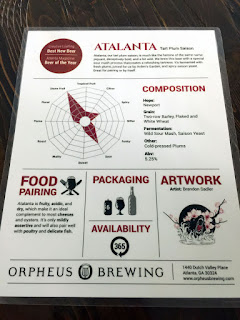 * Peace. War. Truth. Lie - this session IPA has tons of citrus and like the Atlanta above many like it - but it didn't impress me much. To me it's overly fruity and not enough hops. 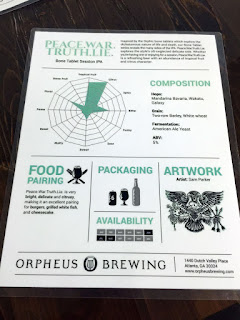 * Clio and Chickataur - both of these are sours and I just couldn't. Way too tart for me. 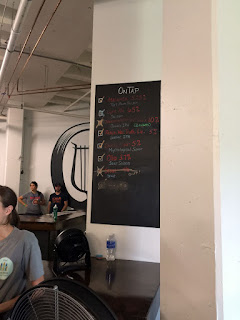 They also were out of the Stout which I was really looking forward to trying. So basically, the two beers I really wanted to enjoy were out and I was stuck with Atalanta and the session IPA. I still have half my tickets so the visit was basically a bust. I hope I have better luck next time (and don't worry, it won't stop me from ordering the Transmigration whenever I can find it.). Oh and don't forget to take the tour - that's REALLY what you're there for, right? 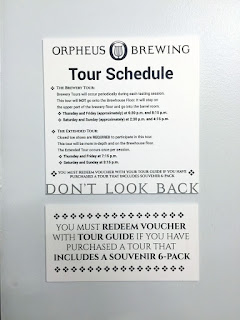