This past weekend (the weekend of July 4 - Happy Birthday 'Murica!) I once again participated in a restaurant and pub crawl, inspired by the Peachtree Road Race. Kevin and Verlin came up with the idea in 2014 while training for the 10K, which starts in Buckhead and ends in Mid-Town. As they ran various parts of the course they kept seeing restaurants or pubs that they either liked or wanted to try - thus the list of 10 for 2014, and now for 2015 was born. This was the planned itinerary: 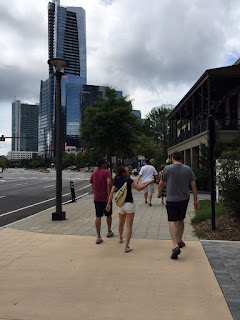 The return of the world's largest world's largest 10K-themed pub crawl. 10 clicks, 10 stops, 10 dishes, 10 drinks. 1 epic afternoon. Wear comfortable shoes and come prepared to have a great time! We'll kick off at 12:00PM (one hour earlier than last year) and go until we reach Piedmont Park.
Here's the Google map of our revised proposed itinerary. The eagle-eyed will notice I've replaced Industry Tavern with Red Pepper Taqueria, because Industry Tavern is on a summer schedule and they are not opening on Sundays. That gives us two Mexican places, so I hope you like Dos Equis and margaritas. 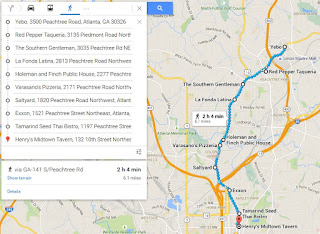 Link to the Google Map
The entire path ends up being about 5.9 miles.
If you're going to do something like this there are some considerations:
Last year we were working out the logistics of a 10K 10-stop pub crawl pretty much on the fly. This year, we're a little bit wiser for the experience. So here’s a quick post with our Eat The Peachtree "strategery".

CLOTHING: This should go without saying, but please wear comfortable shoes and clothing. This pub crawl traces the route of the Peachtree Road Race, meaning we will cover just over six miles over the course of the day. It’s actually a pretty gentle walk when taken at a slow pace, but it is absolute torture if you are wearing shoes that rub you or clothes that bind. We had a couple drop out last year due to bad shoes, and I’m hoping to avoid a repeat of that this year.

DRINKING: This is a marathon (well, technically, a 10K), not a sprint. The limit is one alcoholic beverage per stop. Trust me, it’s plenty. If you think you’ll want more, save it for when we get to Henry’s. Also, it’s going to be 90 degrees plus. Drink at least a glass of water at every stop. You’ll thank me later.

EATING: We’ll place one food order on arrival at each stop. Most of these restaurants have a dish or two that they are especially known for, and we’ll order enough to split so that everyone gets a decent taste. If you have any dietary restrictions, I need to know about them ASAP.

NO SEPARATE CHECKS: In the interest of time, everything goes on one check. I’m going to pick up the bill at each restaurant, and will settle up with everyone via Paypal by doing a modified “New York split”. (In other words, we aren’t going to do an itemized split, everyone in a group of X people that runs up a $Y tab pays $Z, where $Z = $Y/X. The modification is that we’ll actually run two tallies - one for food and one for alcohol. If you aren’t drinking, you’ll get a bill for just food, and if you are drinking, you’ll get a bill for food and alcohol. I’ll publish a Google spreadsheet with the gory details and a request for money. Please don’t leave me hanging - I only look like a million bucks.

NO HOP ON / HOP OFF: Given that this is a Sunday, I expect we’ll have people who will need to arrive late or leave early. That’s fine, we had the same thing happen last year, and we were able to handle it. That said, this is not a Gray Line bus tour. I do ask two things: One, if you’ve arriving late, when you are en route to Peachtree, please call me at XXX-XXX-XXXX, and I’ll let you know where we are going to land next so you can join us there. Two, if you’re bailing, please make sure I know that you are leaving the group, otherwise, we’ll lose time trying to round you up after you’ve already left.

TRANSPORTATION: Again, this should go without saying, but I’m going to say it anyway. I don’t want to hear about anyone catching a post-ETP DUI. Take Uber, public transit, or ride with a designated driver. The nearest MARTA stops to YEBO are Buckhead station on the Red Line and Lenox station on the Gold Line. If you are coming from north of town, you can park at North Springs, Sandy Springs, or Dunwoody Station for free for up 24 hours. Phipps Plaza and Lenox Mall both have signs prominently stating that they will tow your car if you park there and leave. How true that is, I have no idea.

PLANS MAY CHANGE: Last year, we had a restaurant unexpectedly close on us despite verifying they would be open beforehand. I’ve called and verified that all the stops on this year’s crawl should be open, but should we find differently, we may end up improvising. Weather may also impact our plans. Again, depending on what happens, we’ll improvise as needed.

Okay, that’s enough fine print for one pub crawl. I’m really looking forward to seeing everyone and eating and drinking our way down Peachtree Road / Street!
The Event
So out of about 30 people that were invited, 7 showed up with one immediately bailing (still hungover I guess), 6 made it to the end... 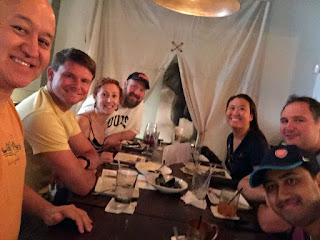 I'm breaking up the individual restaurants into separate posts. They'll all be tagged with ETP2015.
-- John