The Vortex Bar and Grill - Peachtree St in Midtown

This location of the Vortex Bar and Grill can be found at 878 Peachtree St NE, Atlanta GA 30309 as an expansive storefront with a curved neon marquee North of the Dick Blick store on the corner of 7th St. This is an expansive bar that absolutely does not allow anyone under the age of 21 to enter so moms with kids, don't even try. This bar also allows smoking so if you are one if the finicky ones, don't even bother. 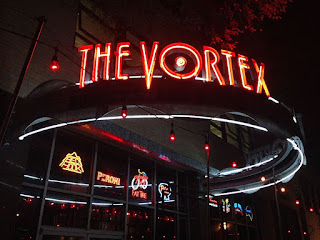 There are few bars in the Southeast, heck even in the US that compare with the Vortex for an atmospheric grasp on the jukin' counter-culture that thrived before the current non-smoking restaurant-bar concept. I'm still not quite sure how it happened, but somehow the fern-and-brass restaurants of the 80's have transmogrified into "safe" bars where you're cut-off after a couple of drinks and there's no smoking allowed. Kudos to the Vortex for keeping it real. Upon entering you'll see a small foyer and someone on hand to check for ID - you'll also see a rather pornographic representation of a phallus as a warning for the soccer mom that this is indeed a place where you probably don't want to bring your kids (it's also pretty funny and sculpted by an old friend, John Woodson.). 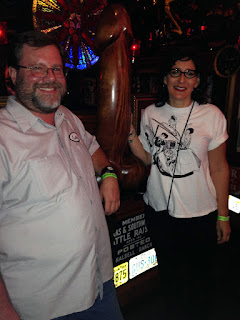 I used to frequent the original location on West Peachtree many, many times a bit earlier in my youth (when I felt like I need to "sew my wild oats" so to speak). I never got thrown out but came close at least once (if you don't know, the Vortex was famous for its reaction to rowdy, drunk customers - at one time it was considered a badge of honor to be thrown out at least once - times have changed). 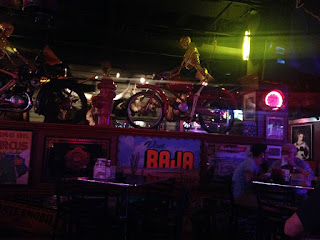 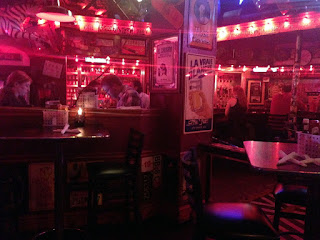 Of this location itself - in the evenings you get to enjoy a red tint to everything from the neon lighting, listen to a noisy, boisterous crowd and look at an expanse of reach-in coolers full of beer. Speaking of beer, the Vortex has an extensive list with plenty in stock so they don't run out of our favorites. They also carry many local brands - one of my favorites is the 3 Taverns white ale but you can find your own. You can also enjoy bar-style appetizers and their famous burger without any shame - if it isn't fried, grilled or seared, you probably won't find it on this menu. The flavor complexity of what they serve is amazing (and probably necessary to cut through the smoke and alcohol) as it should be - good bar food done right. 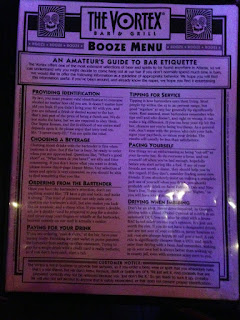 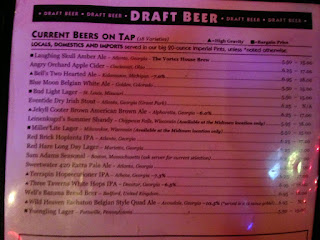 This night we met with John after an evening at the Fox (sounds weird but trust me this works) to get a few apps, drink some beers and catch up. It's been a while since I've visited a Vortex (last summer I took a few of my Indian friends into the L5P location - it was a hoot to watch their reaction - of course late in the afternoon it was so packed that we walked down the street and besides, they didn't have the soccer game on). In any case, we had a trio of treats including:

Boracho Nachos - this is a big plate of smothered chips with plenty of chili, cheese, salsa and you name it. My only quibble is that it could have been about twice the size, it's that good! 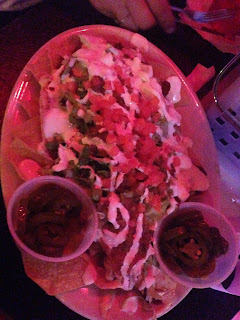 Dixie Fries - with melted cheese, gravy and bacon. I don't believe I need to say more about these... 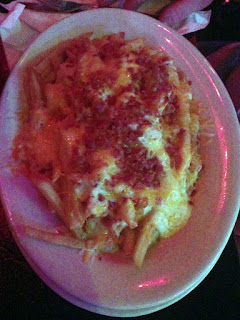 Kari-Kari - mondu-sized dumplings with crab, cream cheese and garlic, served with ponzu and sweet-and-sour. I actually liked these the least - still editable but yes I am picky about Asian food. 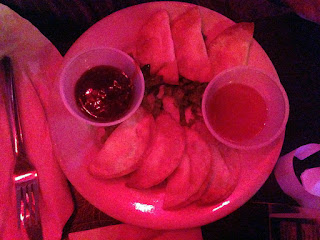 I can wax poetic about the burger but I'll save that for another day - just come here with not expectations and leave happy. Just know that the Vortex has been voted one of the best burgers in Atlanta, not once but fairly consistently since 1992! 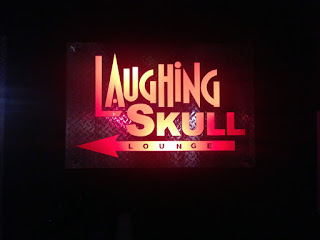 One more comment - if you haven't been to the Vortex' sister club, the Laughing Skull Lounge do make an effort to do so, especially on the open mike nights - have a couple of beers and mozy on over - you'll be glad you did.

After a few rounds of beers and clean app plates we departed from this glorious hell-hole. We promise to be back soon!