This location of Jason's Deli is located at 4705 Ashford Dunwoody Rd, Atlanta GA 30338 in the big Perimeter Village shopping center anchored by Walmart. It's located in the short strip near the main entry close to the Post Office. 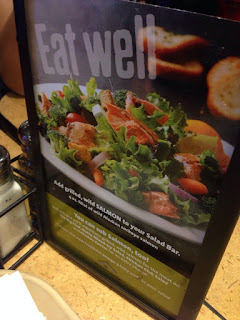 I know that Jason's is known primarily for the sandwiches, but I go to this location for the salad bar. Yeah, I know what you're thinking, but for speed Jason's is as fast if not faster than fast food (which I mostly deplore). The trick is to go to the self-checkout for soup/salad that's near the end of the regular sandwich ordering line. I think the longest I've had to wait was with one person ahead of me. You basically follow an easy-to-use touch screen menu to make your selection(s) then pay with a credit or debit card - it's that easy. The hardest thing about the whole process - understanding that the stripe on your card needs to face-up instead of face-down when swiping.

The salad bar itself, while not as long/large as Sweet Tomatoes (which I'll forever use as a comparison - eat there some time and you'll understand why) but still chocked full of most of what you might want. I usually load up and throw a couple of hardboiled eggs for protein and use the balsamic vinegar dressing.

For sandwiches (which if you've been reading my reviews you hardly ever see one) are good but nothing to write home about. I do like the pastrami Reuben - but that's about it (not that the sandwiches are bad here - I just in general don't care for sandwiches).

They also have these small muffins that are delicious (the dark ones, don't know what's in them but they have a cinnamon/nutmeg flavor). There's also free chocolate, vanilla or swirl soft-serve when you're done with the salad. I'm talking a 30 minute lunch here, folks, giving you plenty of time to go to the US Post Office next door.