El Taco Veloz is located at 5084 Buford Hwy NE, Doraville, GA 30340 next to Marisqueria El Veneno on the left, right where Buford Hwy and Shallowford Rd cross. It's an old converted dry-cleaners with the wings on either side for the drive-through - there's a small space in front that's covered but unheated or cooled where you can sit out of the heat and enjoy your delicious Mexican specialties. 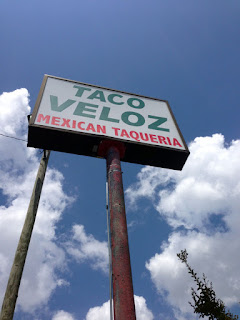 I do love me some tacos and Veloz is about as authentic as you can get - we're talking meat, a bit of onion and cilantro and some heat wrapped in a soft, heated corn tortilla. Occasionally the do some specials for $.99 - try the pollo for a little variety. Where they really excel, however, is in their carne asada - pay a little extra and get the burrito - it's almost all delectable, lime-marinated beef! Get it with everything and then load up with their really spicy salsa verde - it's awesome! 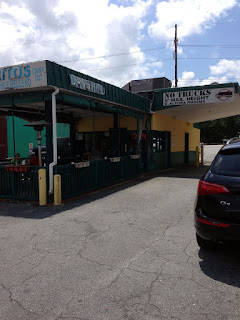 For an extra treat they have horchata by the counter - everything is served in little plastic baskets or in disposable plates (or just wrapped if you're getting things to go). Service is very good - the staff here are very kind and used to the stupid questions of gringos. 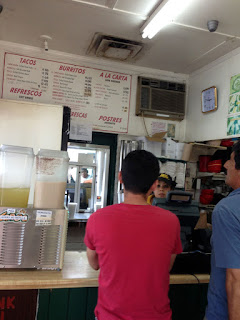 I've tried a few of the items and frankly the beans/rice are nothing to write home about - fairly basic - I come here for the carne asada! Note that the food will be a bit greasy as it's cooked on a flat top griddle - but that's as it should be (no pansy white-boy food here). I only wish they served alcohol, but then again with a drive through you can sit in the car anywhere and enjoy a Tecate with your meal. And did I mention that's it's super cheap?

Parking can be a bit sketchy - there are spaces behind the building and it gets super busy so people are constantly pulling in or leaving. You can probably park in the shopping center on the right (and top your meal with some honeydew bubble tea at Quickly Bubble Tea next door!) as long as you don't park too long. Or cross the street to Holiday Package and pick up a six pack of delicious Monday Night Brewing Drafty Kilt - now were talking!

(much shorter version of this review published to Yelp in 2011)