Kabob and Curry is located at 261 Thayer St, Providence RI 02906 in College Hill, not to far from RISD. If you haven't been to College Hill it's quite a treat - much like other neighborhoods near colleges, there's several inexpensive restaurants, a big Starbucks, a classic movie theater (with lit marquee!) and of course, Kabob and Curry.

After a rather disappointing experience at Bombay Club I didn't have high hopes in finding decent Indian in Providence. Since I'm usually traveling with my friend and coworker, Siddharth, we usually sample what each city has to offer in Indian cuisine - Sid had previously lived and worked in Providence and recommended Bombay Club and we found out from that experience that the restaurant had definitely taken a turn for the worst. You would think that in the very popular Federal Hill area that an Indian restaurant would be supported, but apparently if it's not Italian that's a no-go. 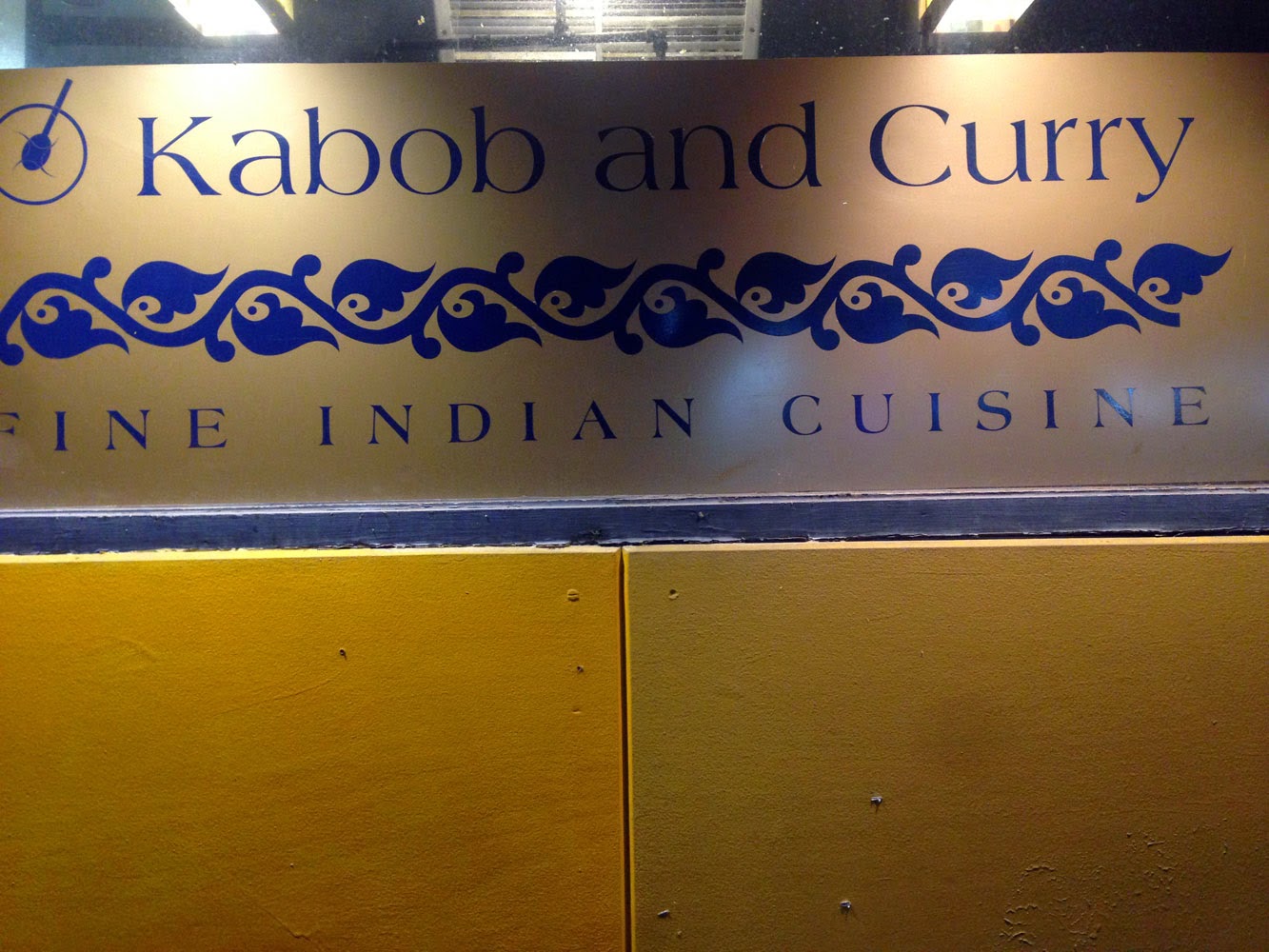 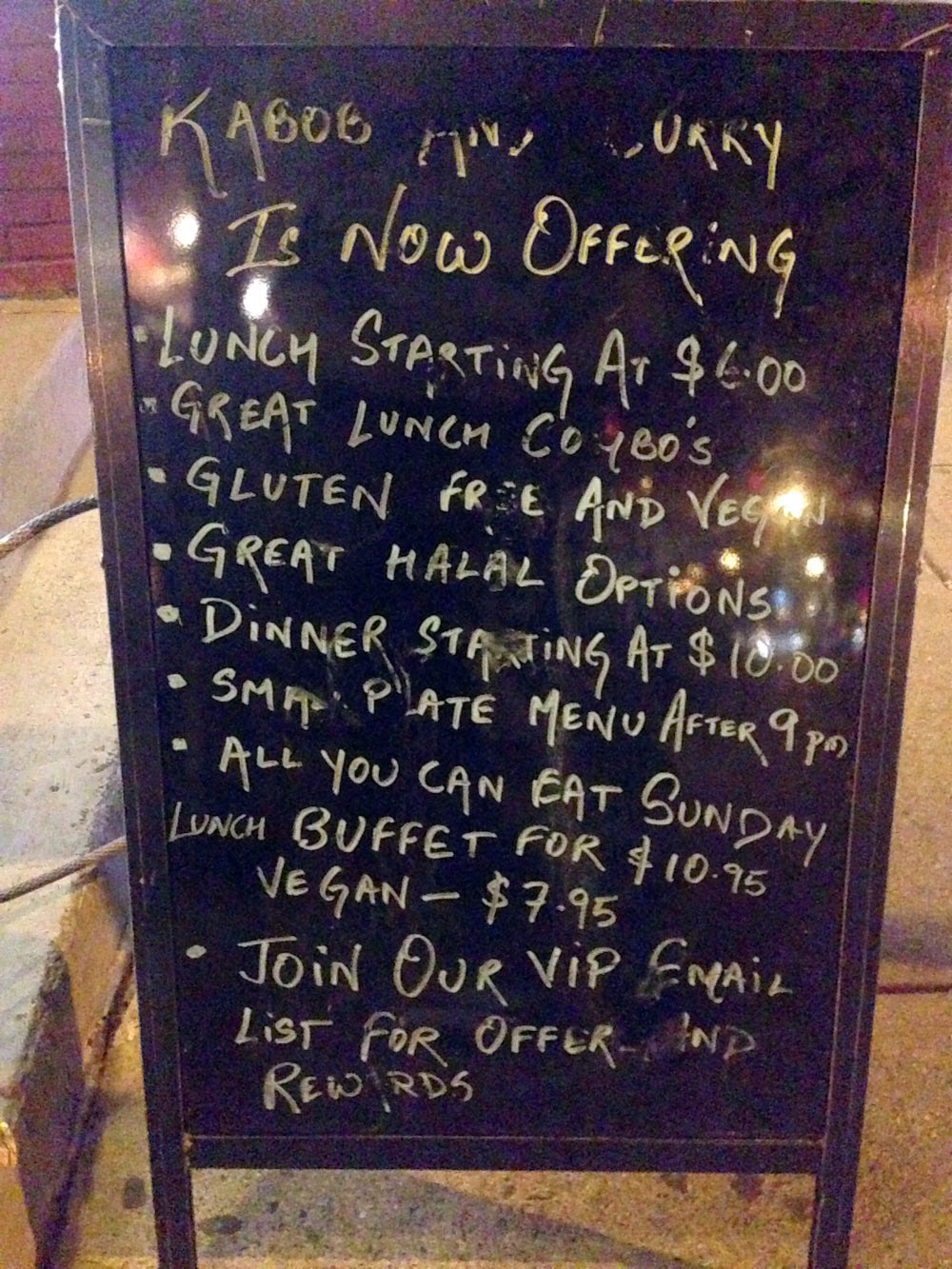 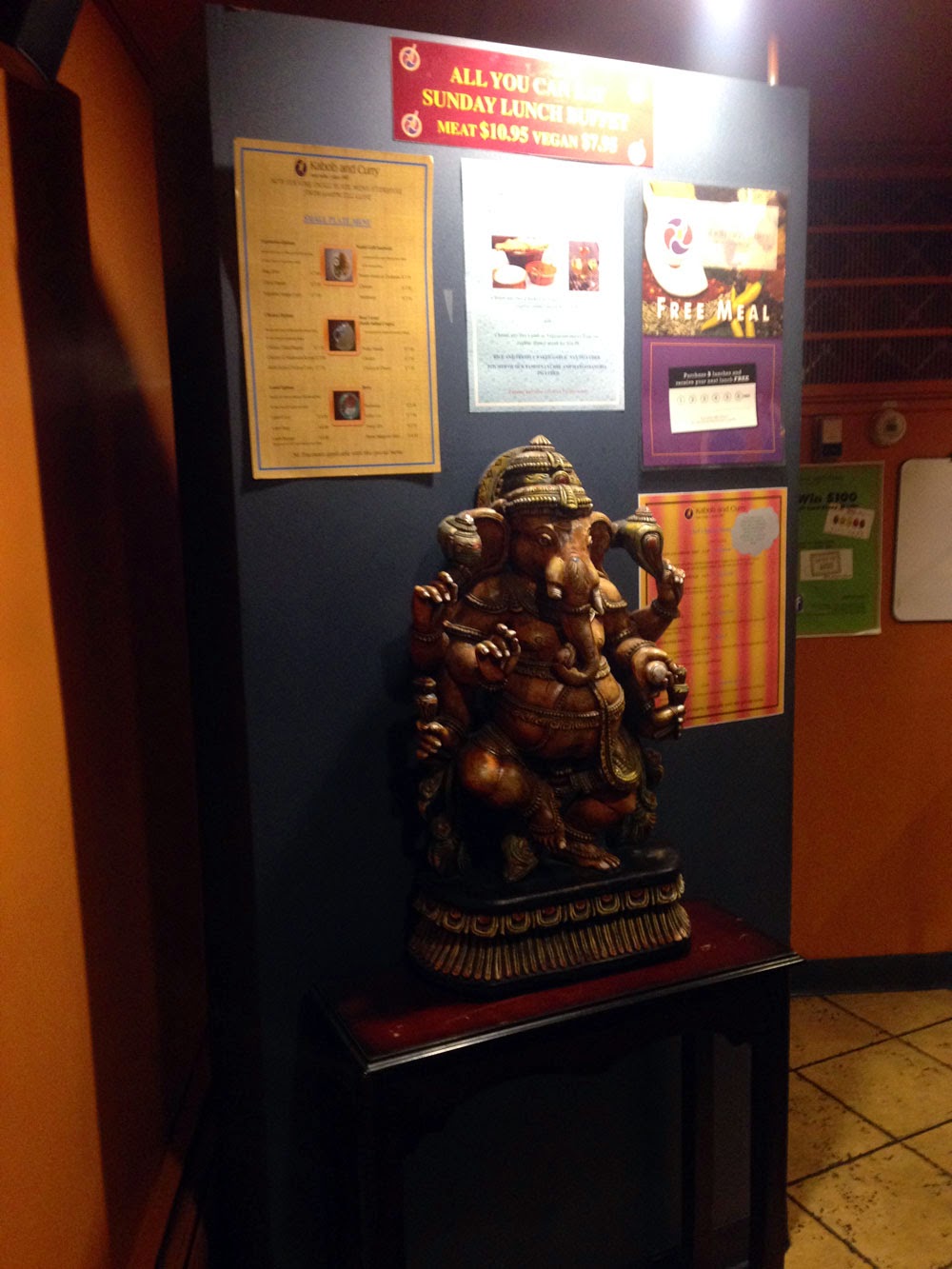 While searching for a new dining experience we decided to go by the Rhode Island School of Design (or RISD for short) campus on this particular evening. Doing a quick Yelp search using the smart phone app (which I highly recommend) up popped Kabob and Curry. We had done the same the afternoon we flew in and sampled El Ranchito which was rather disappointing in contrast to the 4-star rating. I did not have high hopes for K&C.

The restaurant has a bit of an odd layout - you climb stairs into a foyer decorated in South-Eastern motifs and then walk through to an outside, covered deck. There's a fold-out sign with specials listed - interesting to see gluten free and Halal options. The smells were very good and there were more than on Indian and South Asian groups of people seated - most appeared to be students so I still reserved judgement. We were presented a menu. 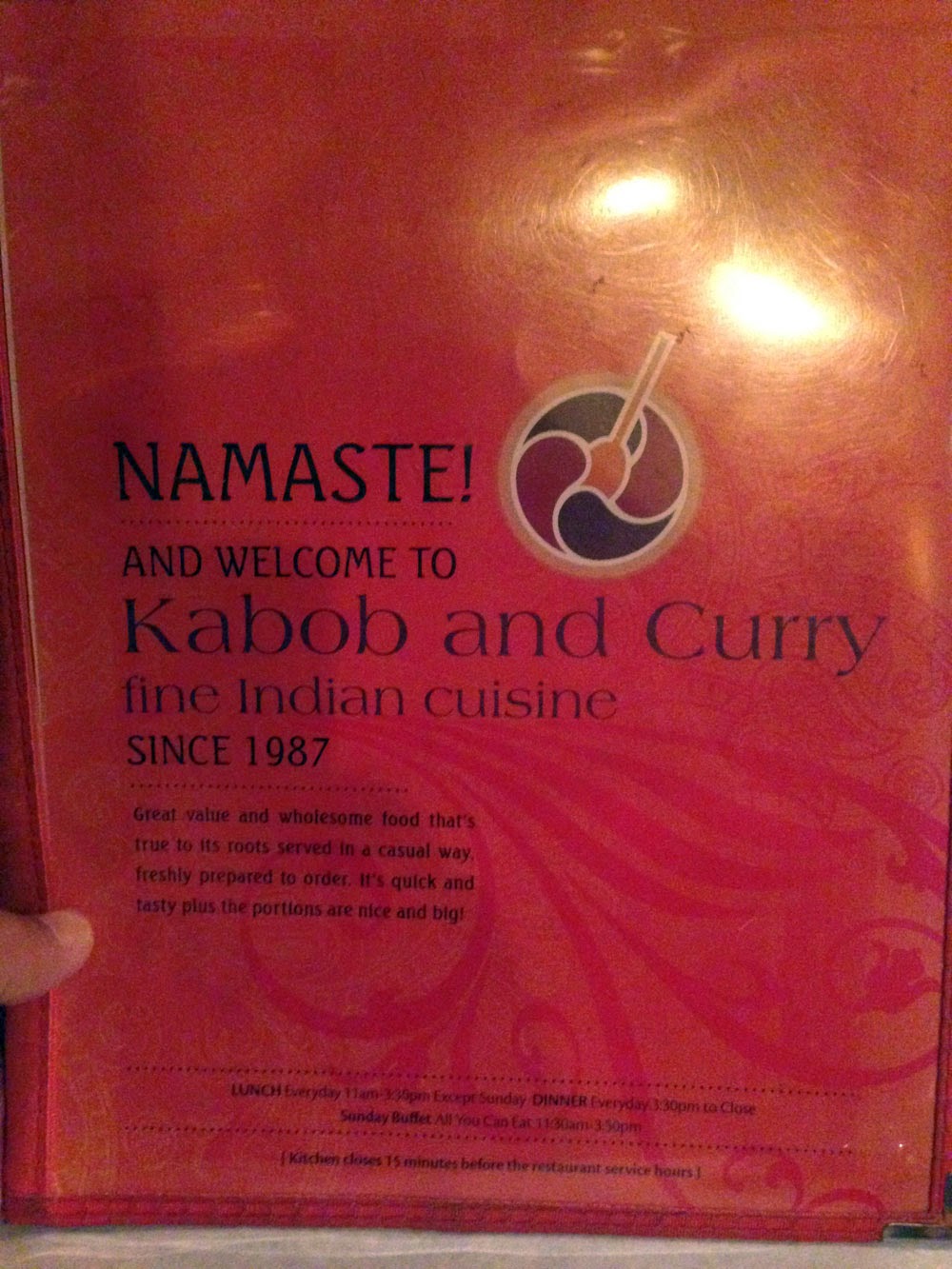 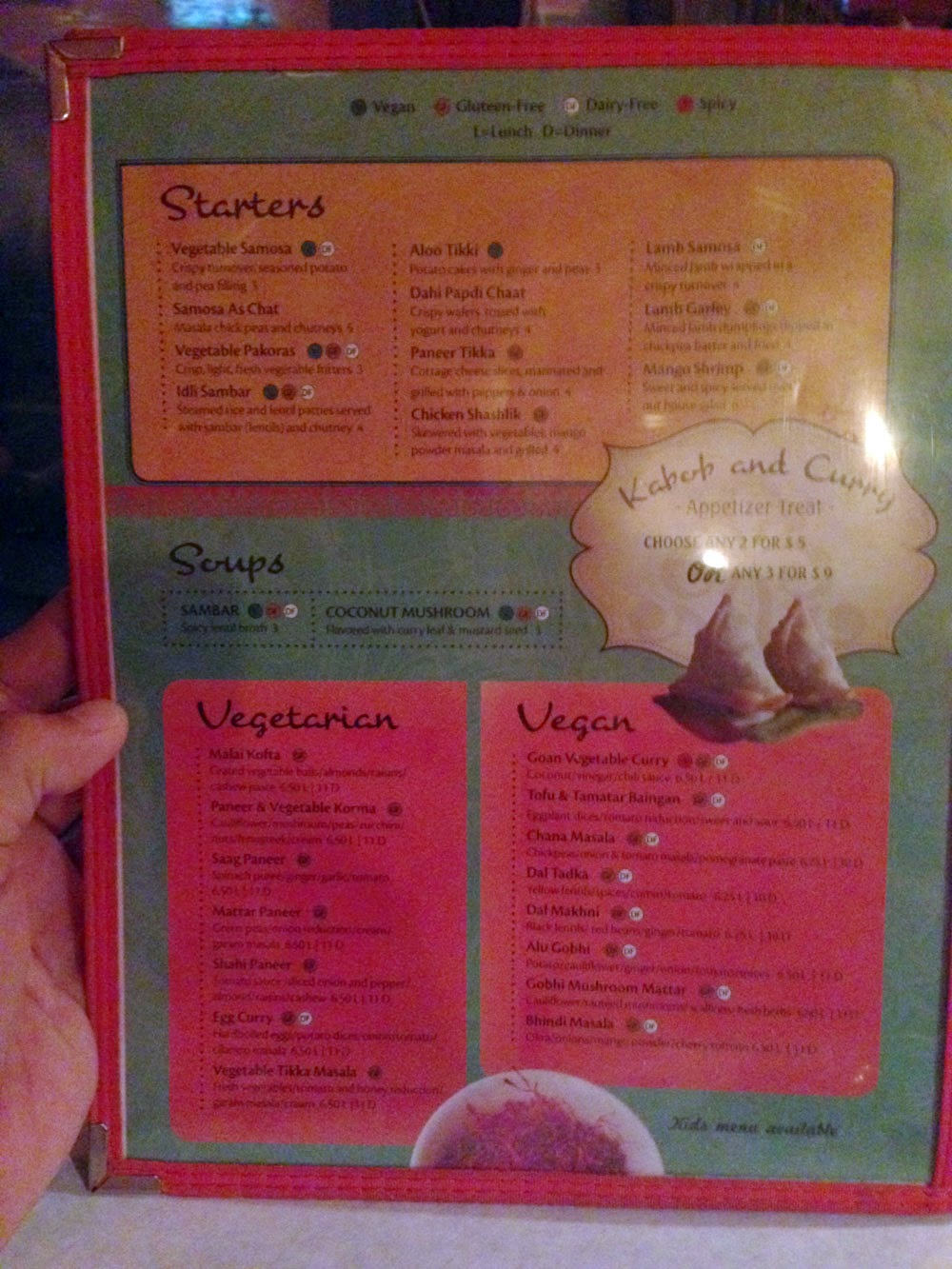 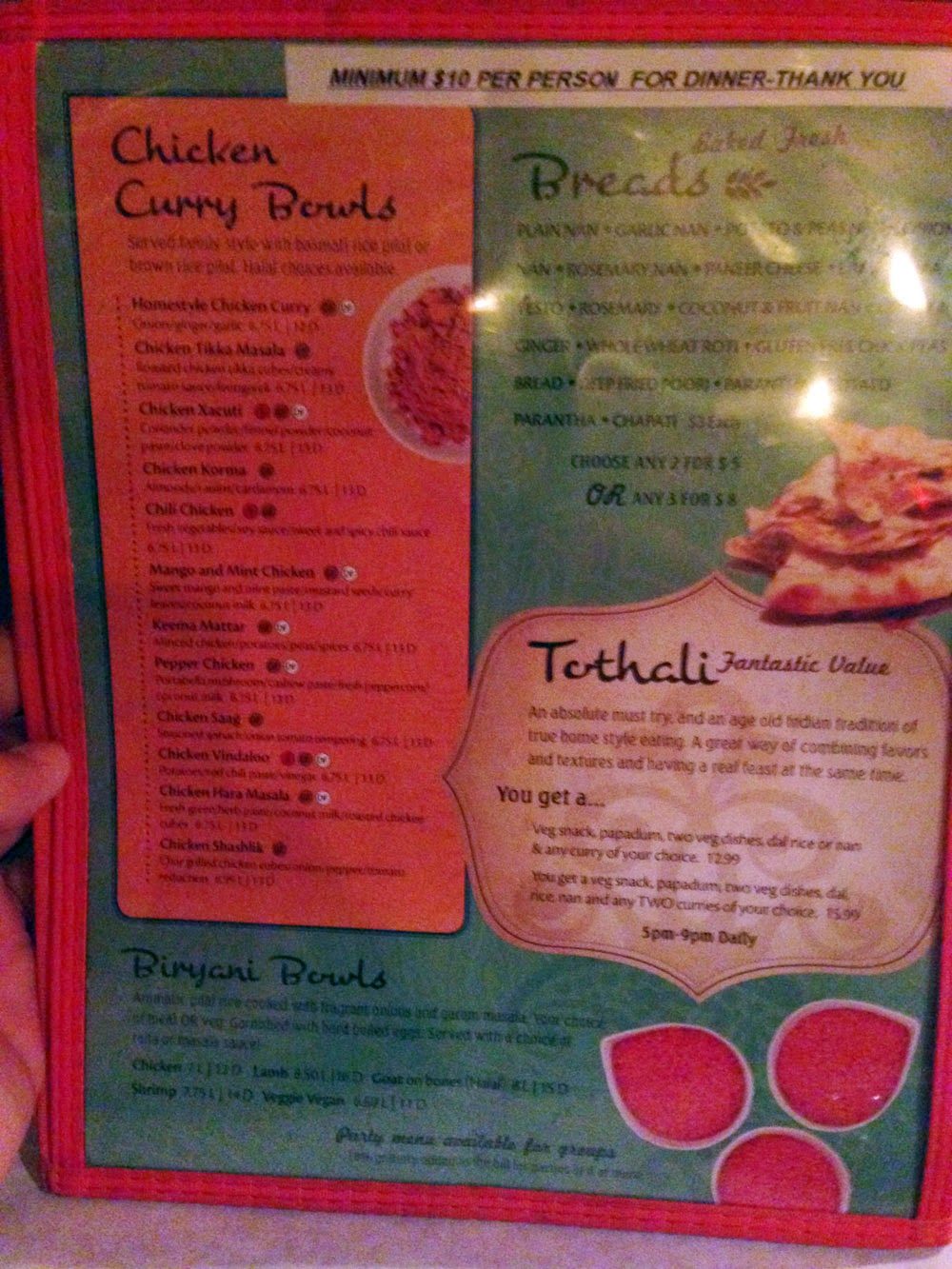 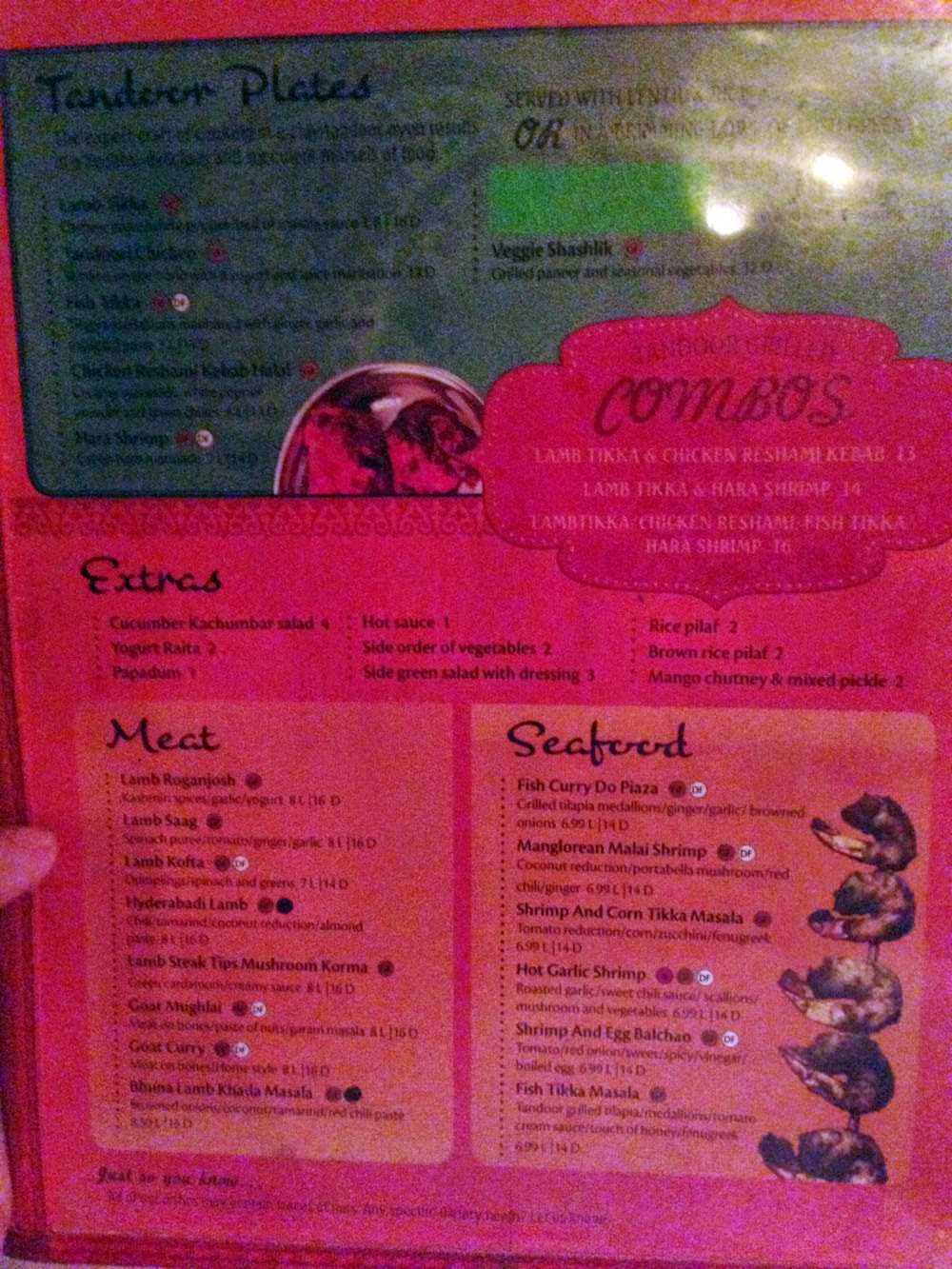 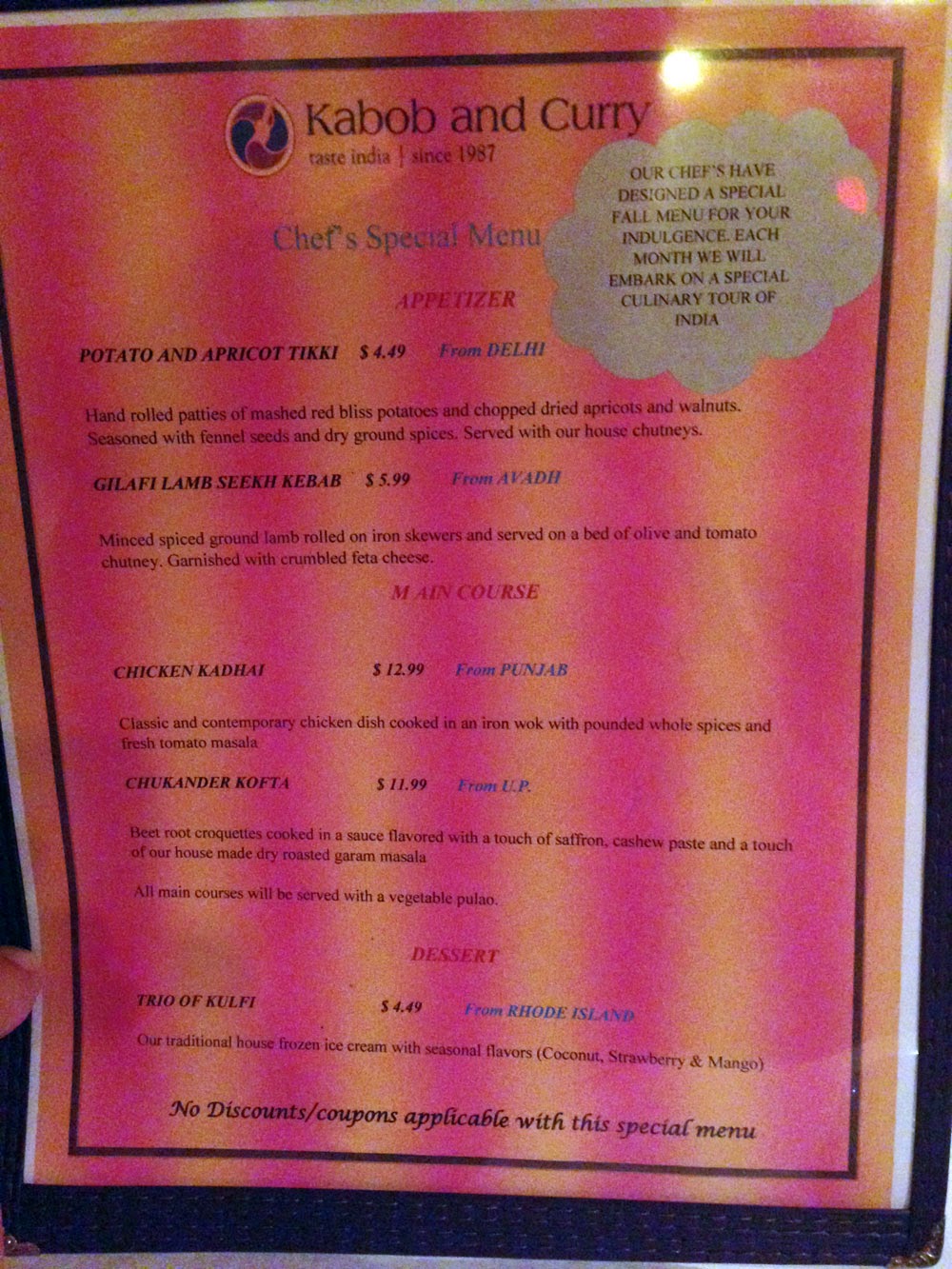 I spotted a Trinity IPA to find out they were out, they were also out of the Sierra Nevada,  Bass Ale and Tajmahal so I defaulted to a Kingfisher. So far I'm not too impressed. We were provided a basket of pappadum with some chutneys that were quite good - OK so my impression just improved. 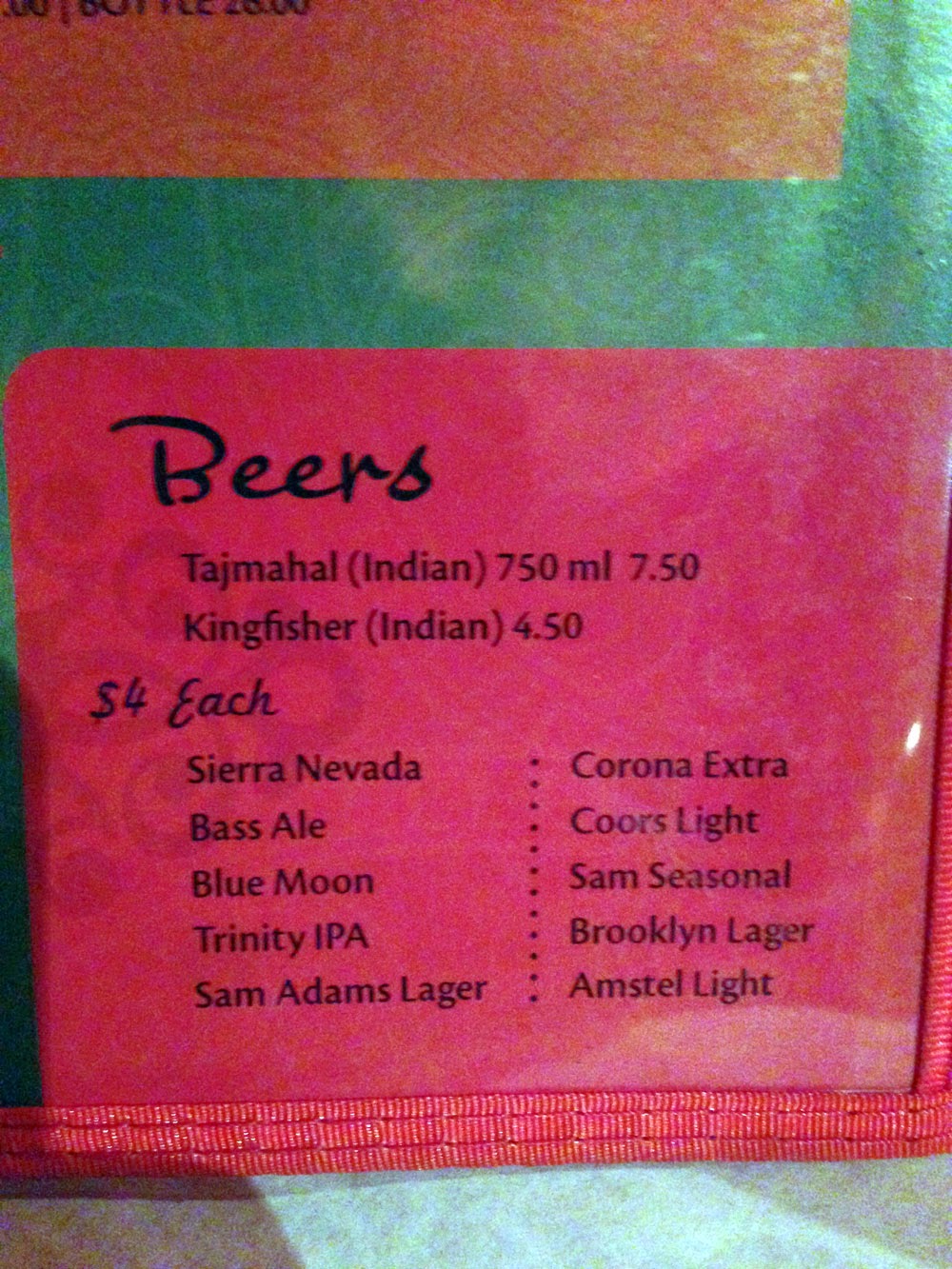 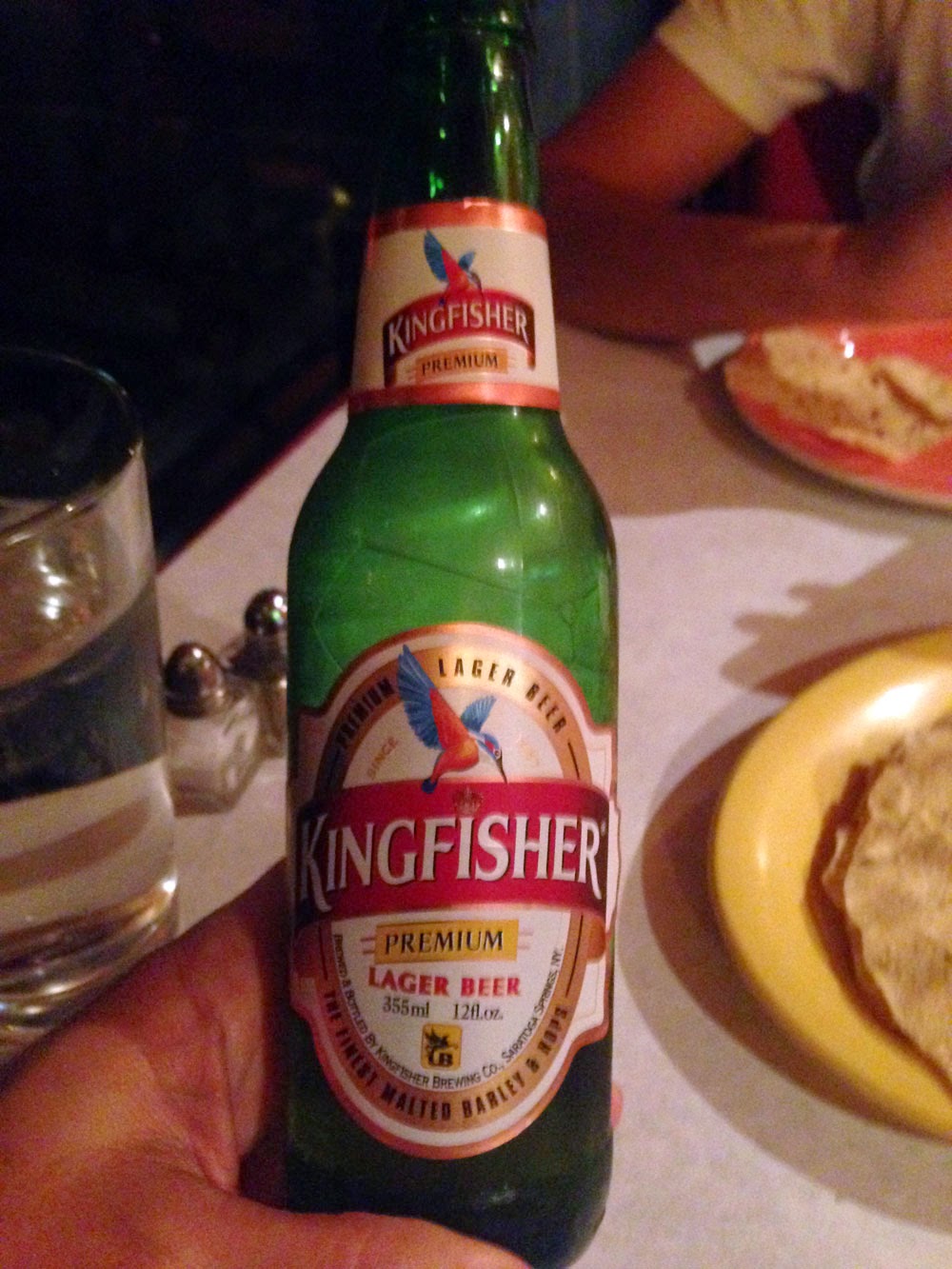 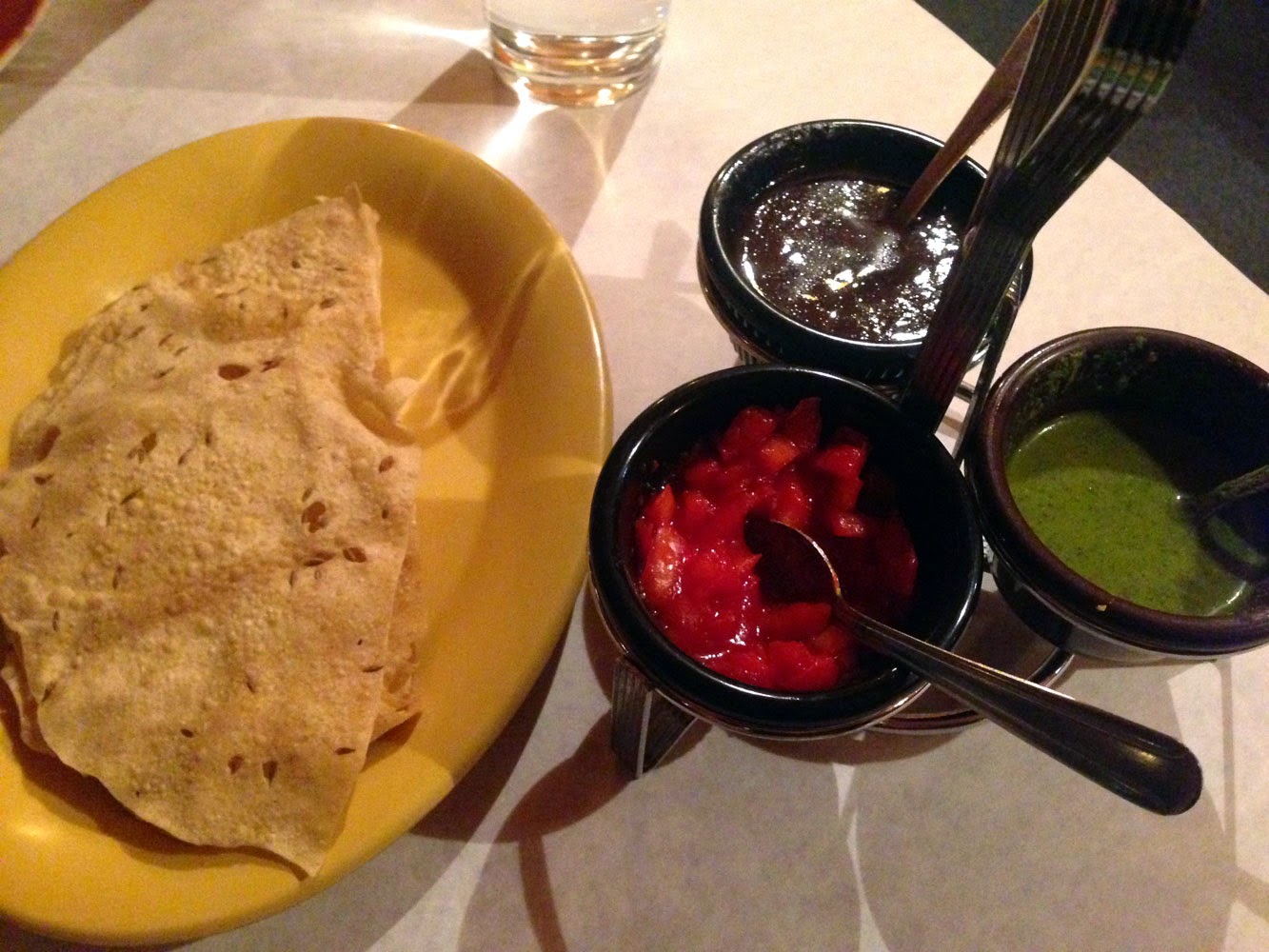 Looking over the menu Sid and I both decided to go with the Thali Plates - these are a great way to sample many different items and get some extras thrown in. You get a samosa, papadum, two veg dishes, rice or naan and a curry (or two for the jumbo) of your choice. You also get keer for dessert!

Vegetarian Thali - Sid went with a sag paneer and a veg curry - he heartily approved of everything on the plate. We both had the same dal which was more of a soup and very tasty. Also, the samosas (they were both veggie) were quite good and a welcome change from some I've had recently. 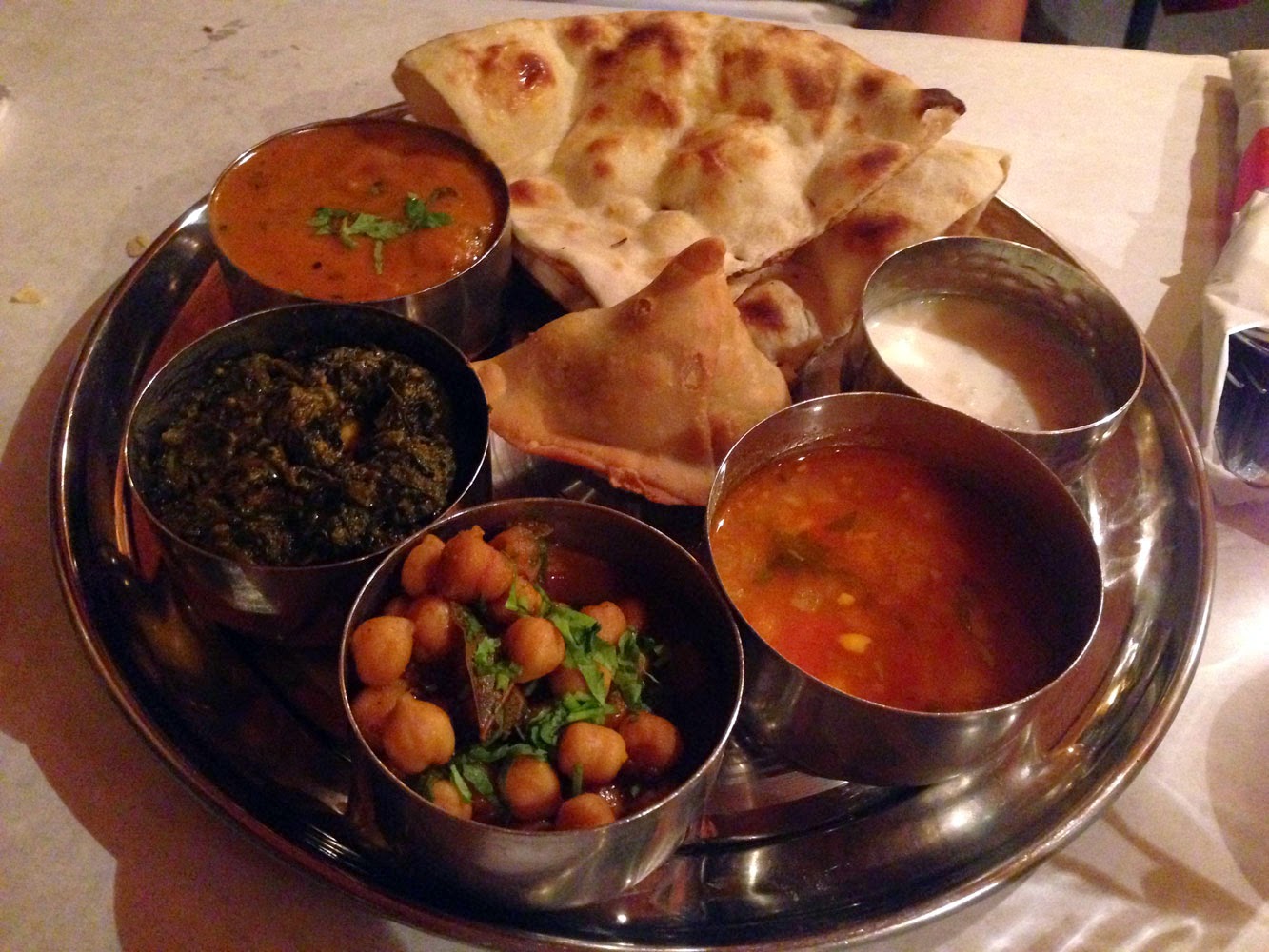 Meat Thali - I went with a Chicken Vindaloo and a Lamb Curry, extra spicy on both. The vindaloo had an appropriate amount of spice and tartness and the lamb curry was tender and delicious. 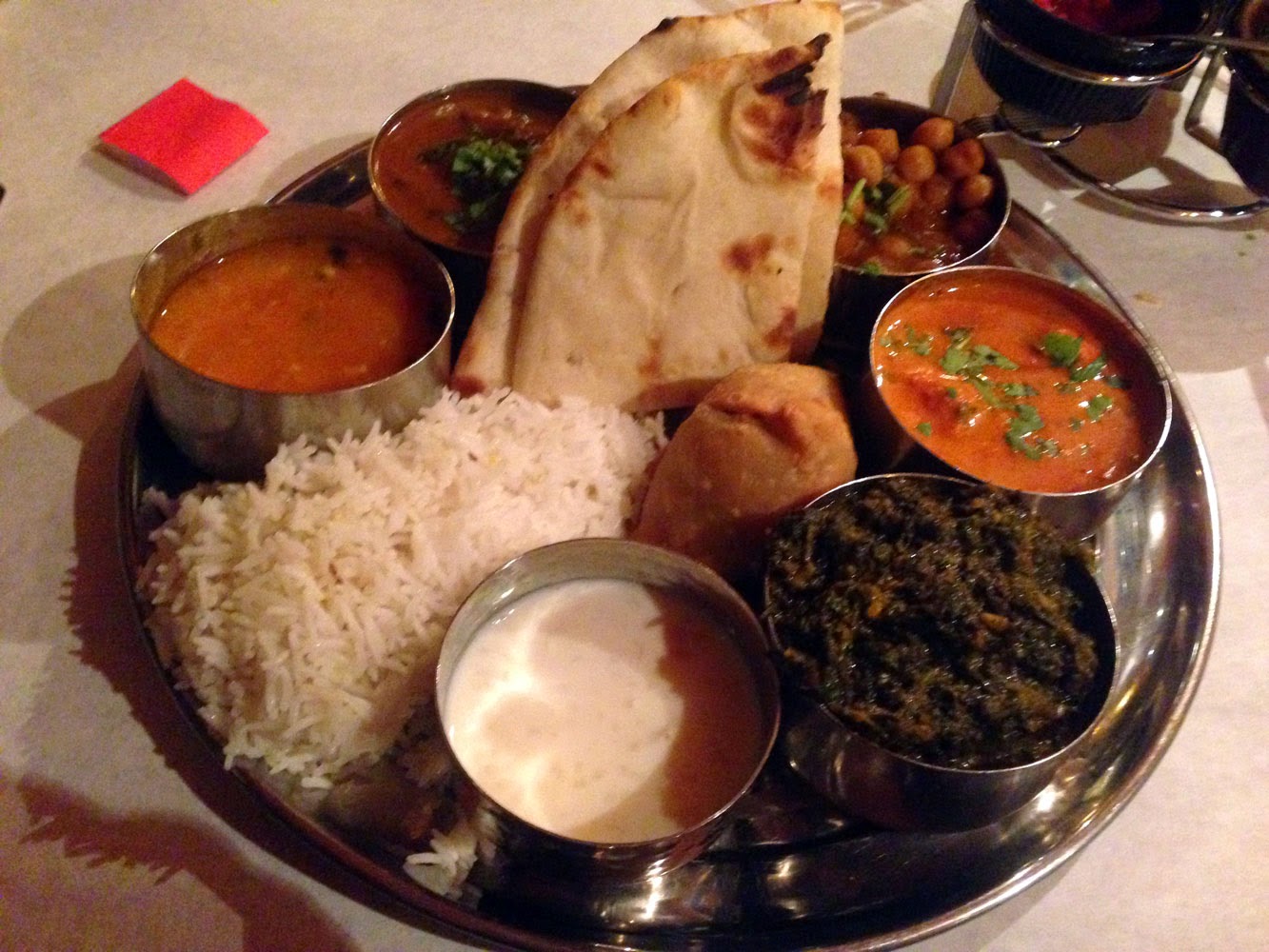 We also added a garlic naan - it was good but appeared to use that chopped garlic you get in a jar. This is still much better than that powdered garlic crap I saw in Salt Lake. Their naan is top-notch (they must have a real tandoor instead of the faux-bread you get in other places). 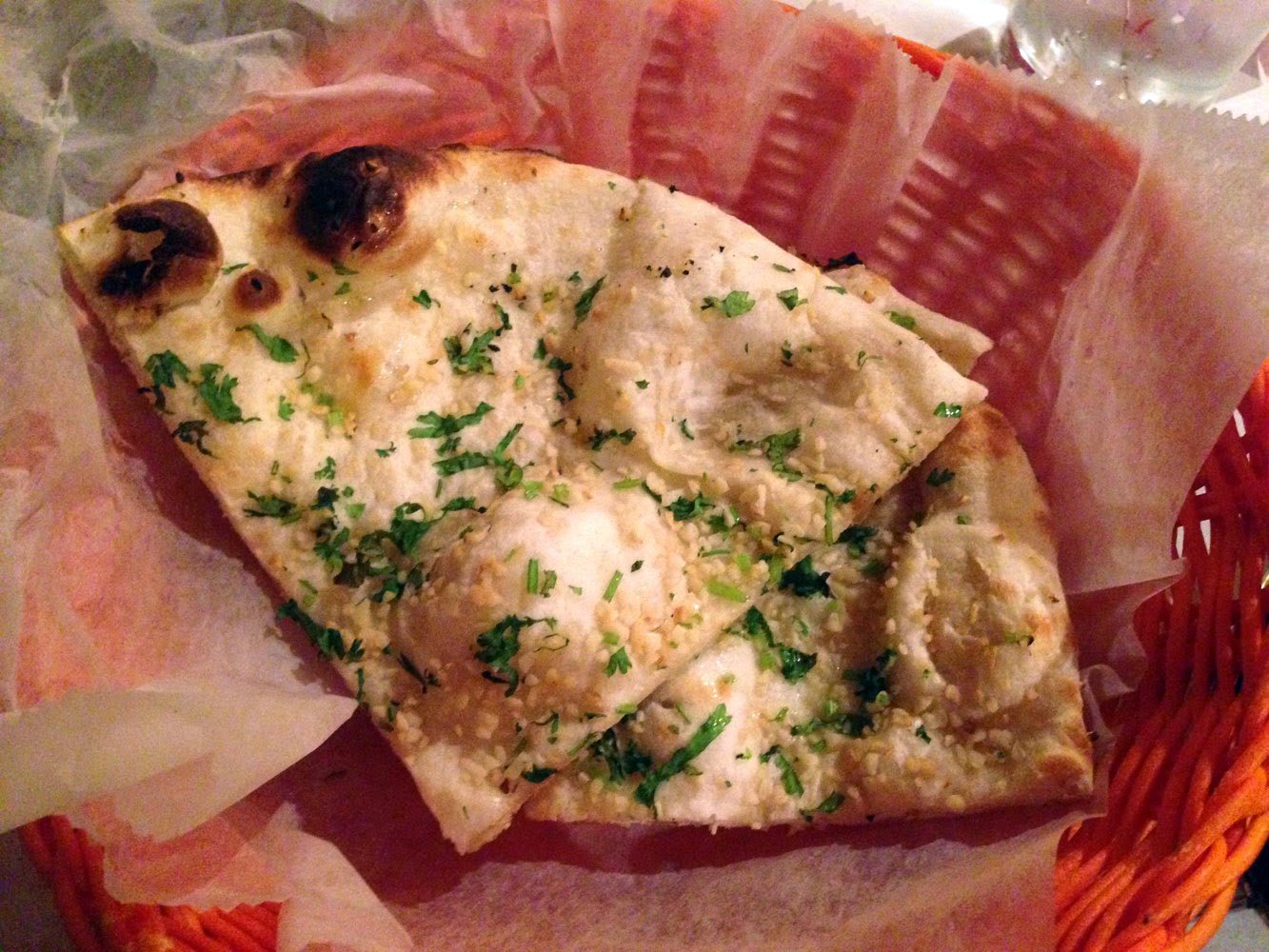 In all the food was quite good with an intensity of spices missing in our previous experience at Bombay Club - we thoroughly enjoyed the food, the service was great and the Thali plates offered more food than either of us could eat.

The only negative was that it was a very busy night so we had to wait a bit to get our food - which was still well within our expectations. Kabob and Curry will be on my "must"  list the next time I return to Providence.