(Also published to Yelp as a shorter review)
I've reviewed Co'm a few times, but it was while visiting it twice in one week (dinner and a few days later for lunch) that I felt I needed to comment again. It's difficult to shoehorn Co'm into any particular style of cuisine - it's definitely Vietnamese (heck is says that in the name) but it's not your typical pho restaurant - you can go to any number of Phở places all along the Buford Hwy corridor and elsewhere as it's become ubiquitous for this style of cuisine. In fact, I don't believe Co'm even had that classic Vietnamese soup/noodle dish on the menu until recently, and while the pho here is good, it's not the reason I love this restaurant so much. Rather than expend energy trying to define the niche Northern or Southern style of Vietnamese traditional cooking, Co'm's approach is more international and I believe French influenced (although many would argue that this is more of an American affectation, rather than a French one - I still think the bread-and-stew, variety of meats and baguettes point more towards the French occupation of the South rather than an American influence). Whatever you want to call it, Co'm has become one of my favorite restaurants in the many years I've visited. 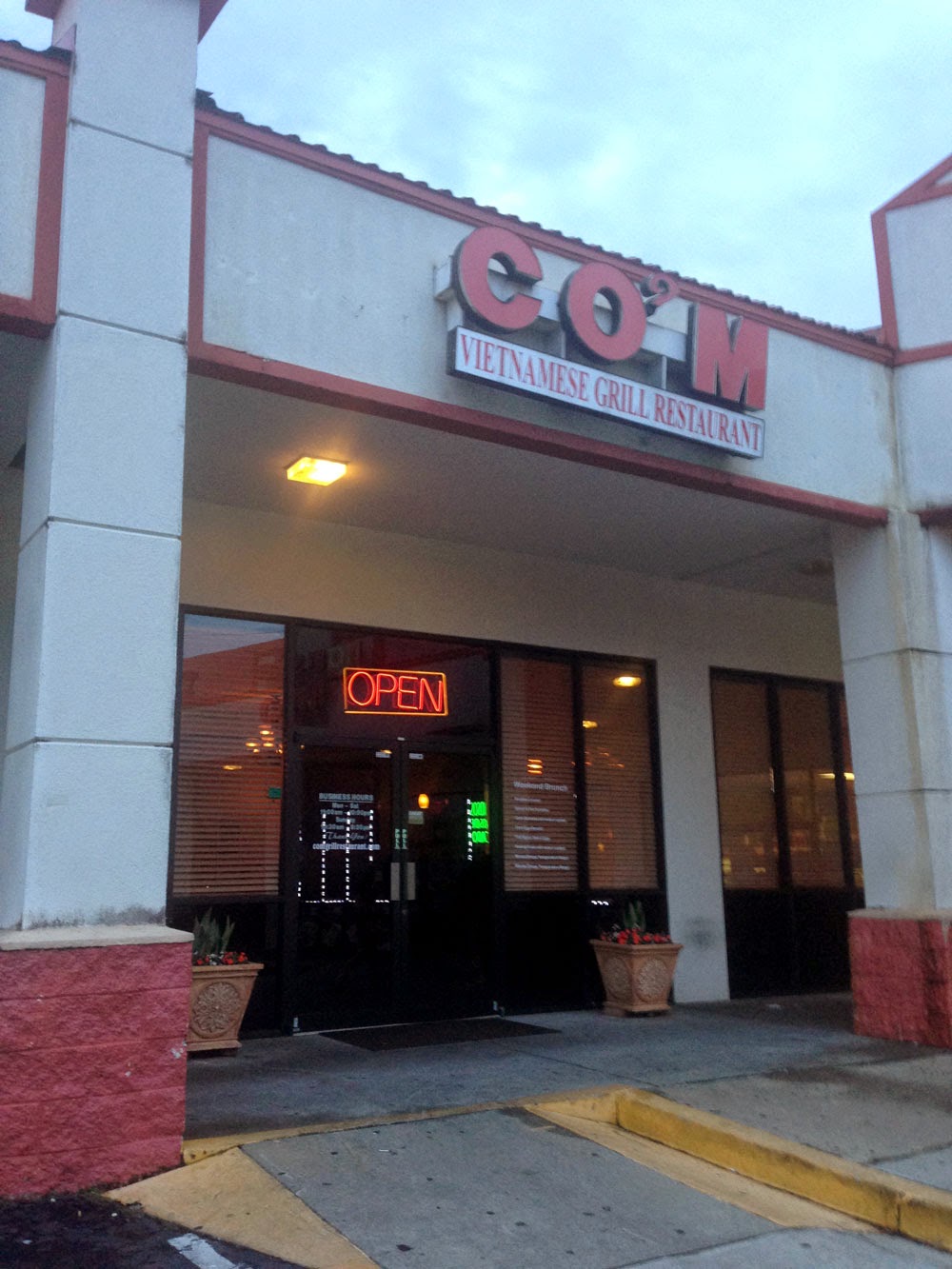 Co'm rests in the corner of an shopping center tucked behind a Chevron station - the better known Lee's Bakery is on the front end and Co'm rests several businesses behind it. When you walk in you'll find a very clean, borderline upscale restaurant with booths and tables. The service at Co'm is frankly fantastic - it's rare to find people who care so much for their patrons and if you've ever been to Asia you will never question the bad service you receive in many other Asian restaurants. Thankfully the owners of Co'm have more of an American take on service with quick attentiveness and water refills. The first thing you'll notice when you view the menu is that it's rather no-nonsense - just a list of interesting items by type: Appetizers, Fried Specialties, Signature Salads, Grilled Grape Leaves, French Indochine - what?! 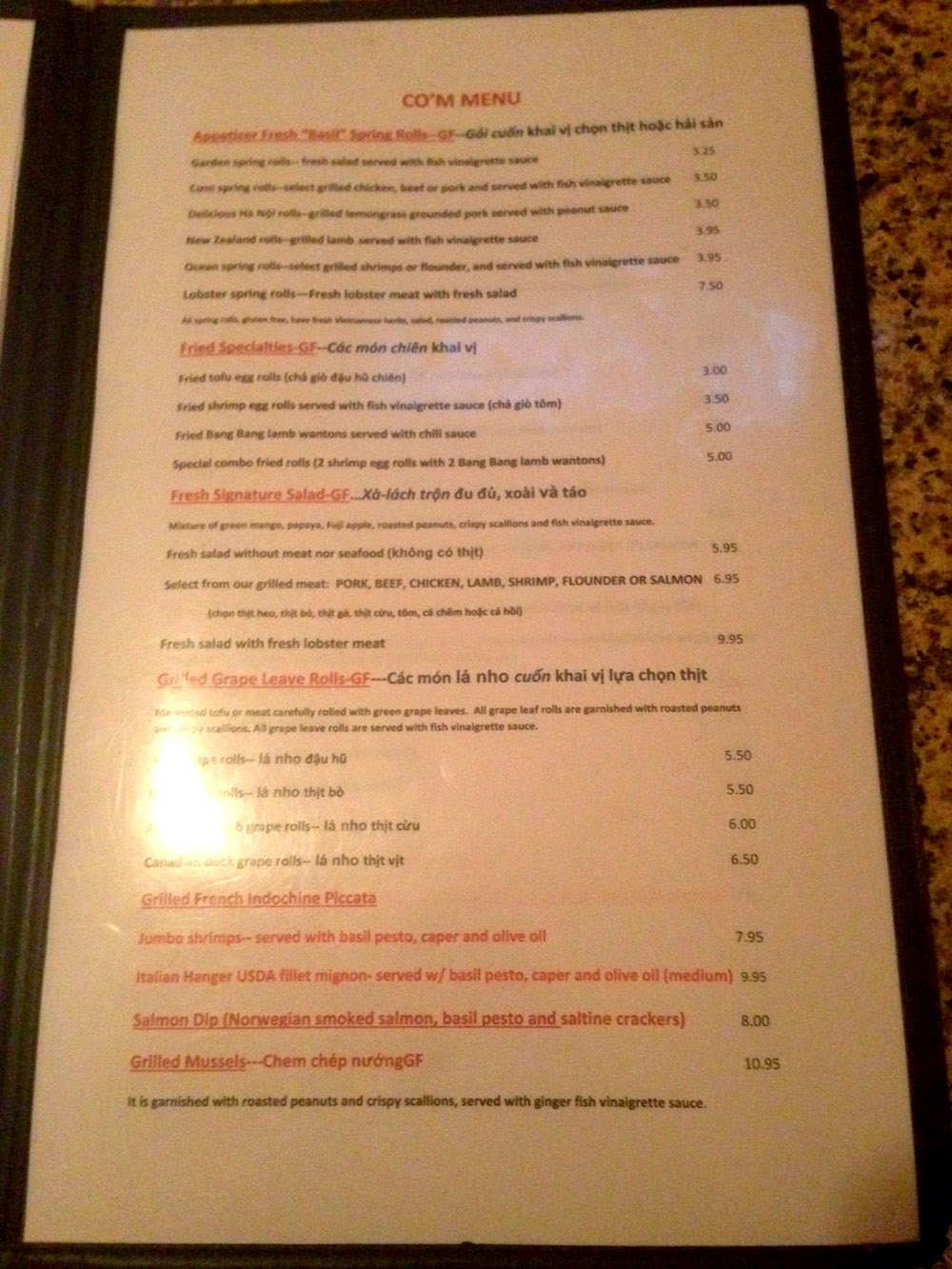 Page two continues with Co'm dishes (co'm means "rice" in Vietnamese, or perhaps "food" or "meal" - from native speakers I've heard it pronounced between "com" and "gum"), but the real stand-out for me is the Bún dishes (rice vermicelli) - both are similar, you basically get the ingredients listed in small piles, either on rice or rice pasta. Typically you mix it all together with a generous portion of sweet-sour fish sauce. 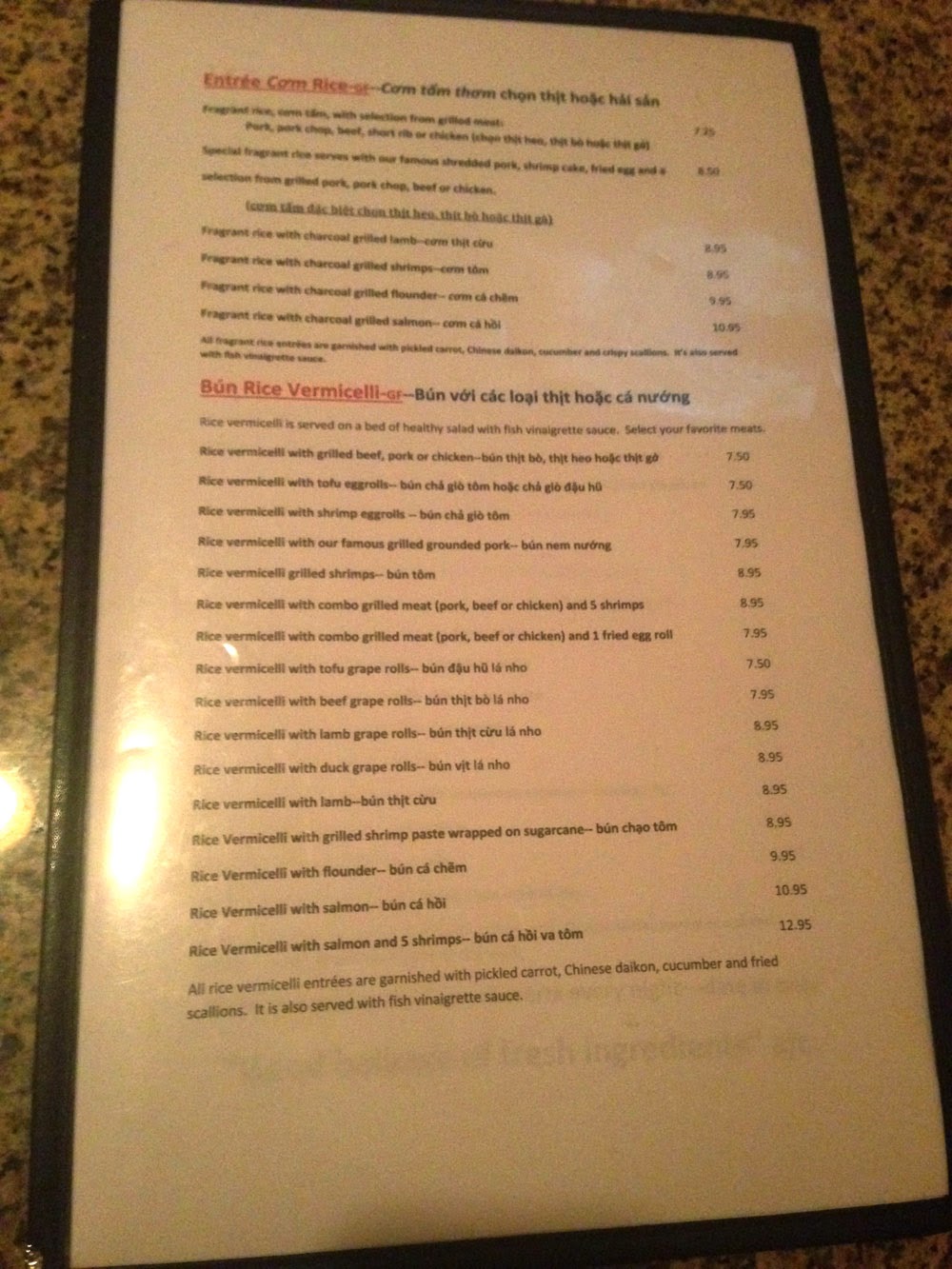 Page three explores the Flat Rice Vermicelli (Búnh Hội), the Shaking Wok specialty (something I recommend to friends who have never had Vietnamese - between this and the Phở I usually get them hooked) and finally the Phở itself. 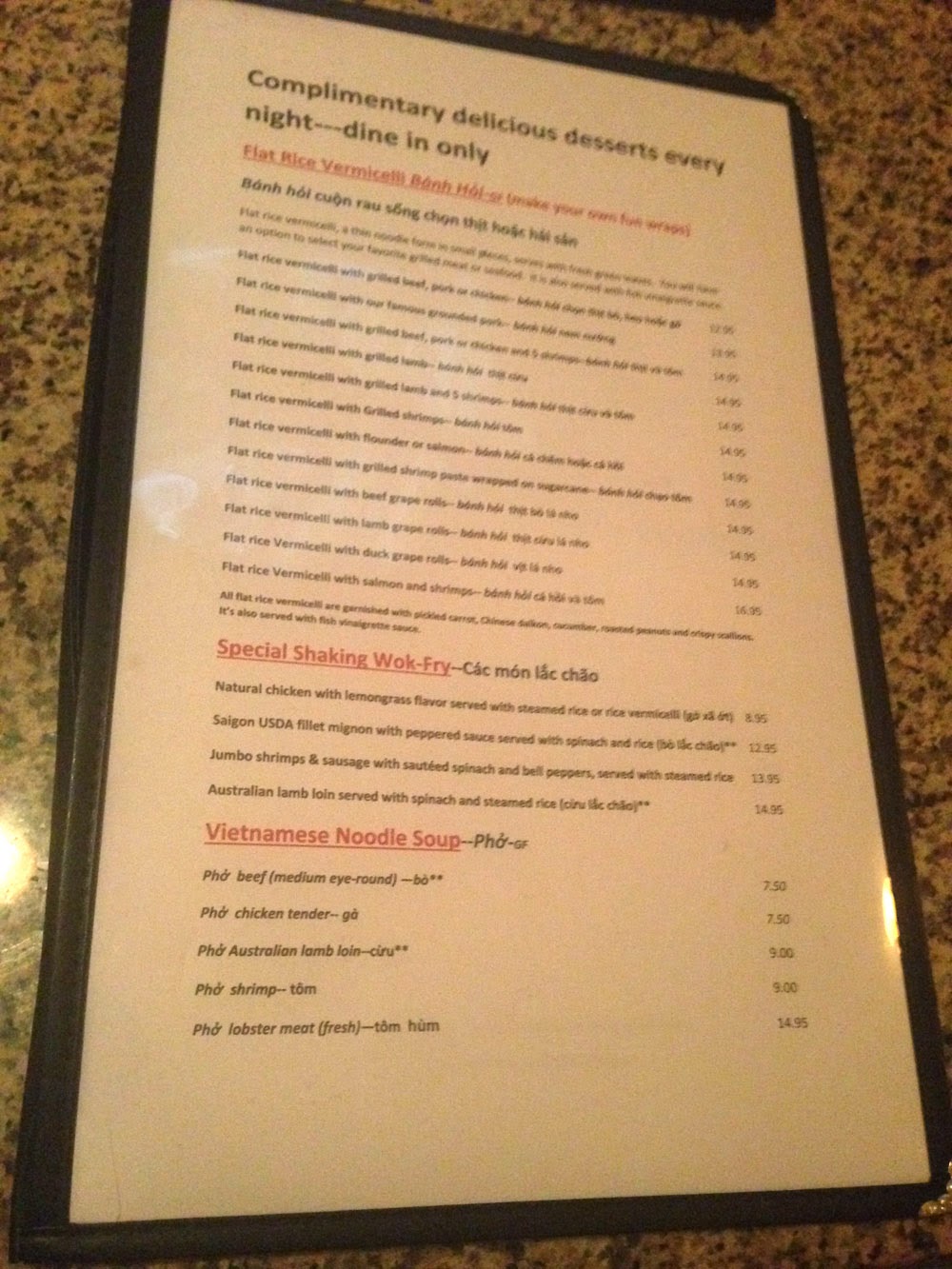 Page four has some very special "French Inspired Indochine Selections" - basically the Vietnamese version of Chinese dishes - these are very special indeed. The menu finishes up with various juice selections - if you come for dinner you get a great scoop of coffee ice cream and delicate cream cakes (this last part is included). 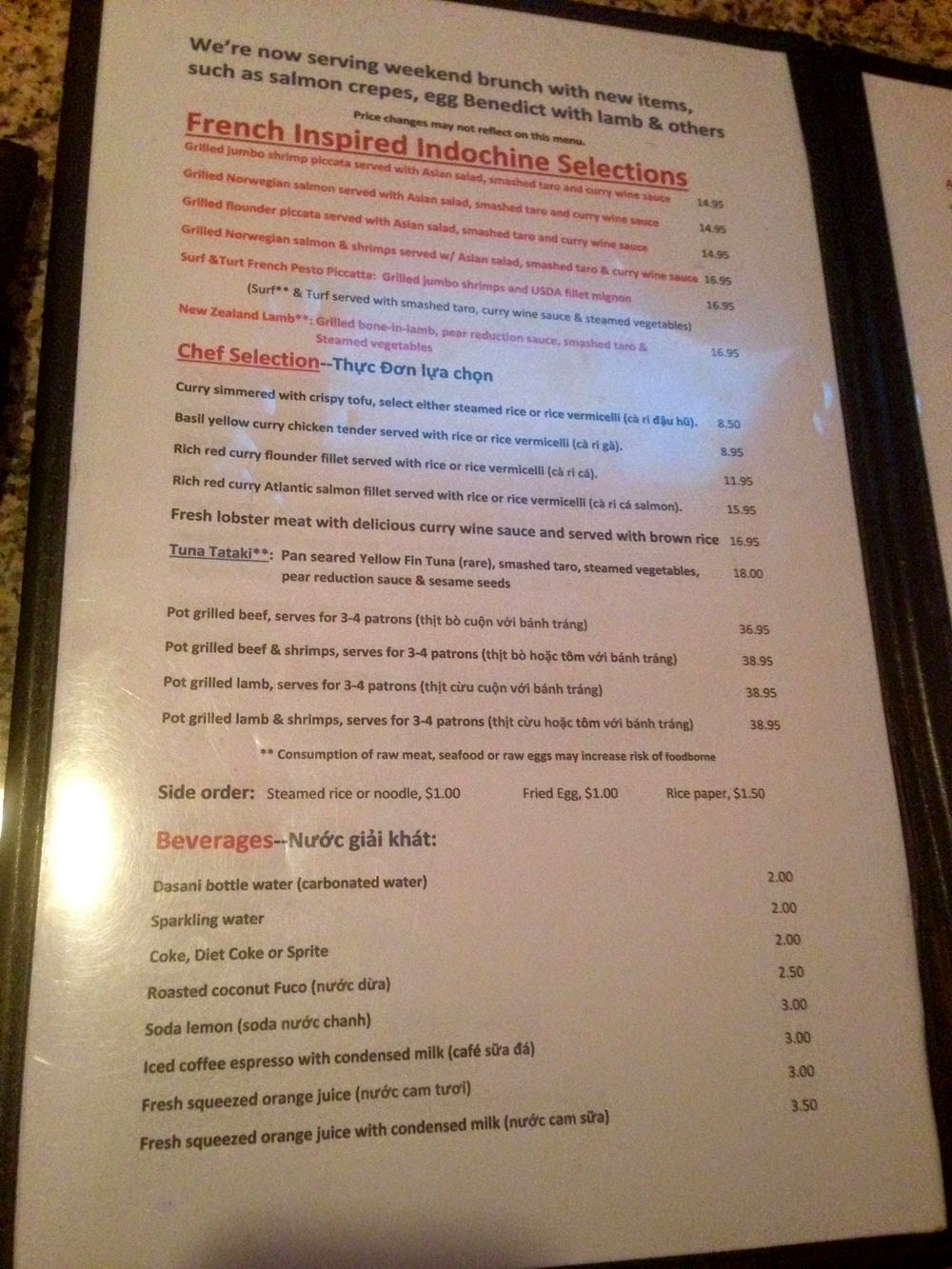 Interestingly, the last time I visited (for lunch AND a different group), we basically ordered the same as the previous time. For me, the Bún with grilled lamb grape rolls is my favorite (note that it was pointed out to me that although the leaf is similar to grape, it's actually wild betel leaf - something I'm not too familiar with but delicious nonetheless) - these rolls are made up of meat (here the options are tofu, beef, lamb or duck) rolled in betel and grilled so they have a smoky flavor. You mix with fresh veggies and the fish-sauce and chow down. 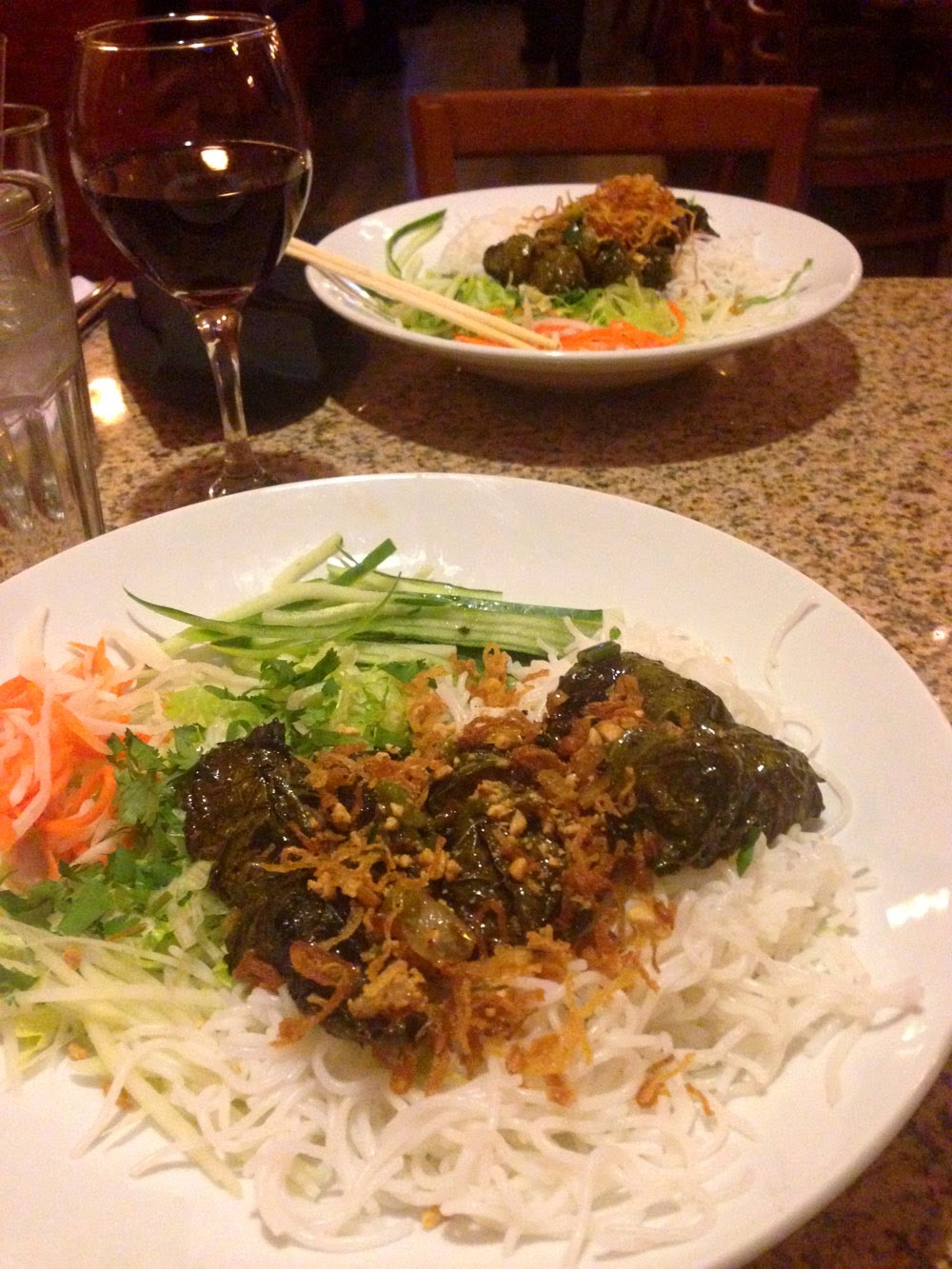 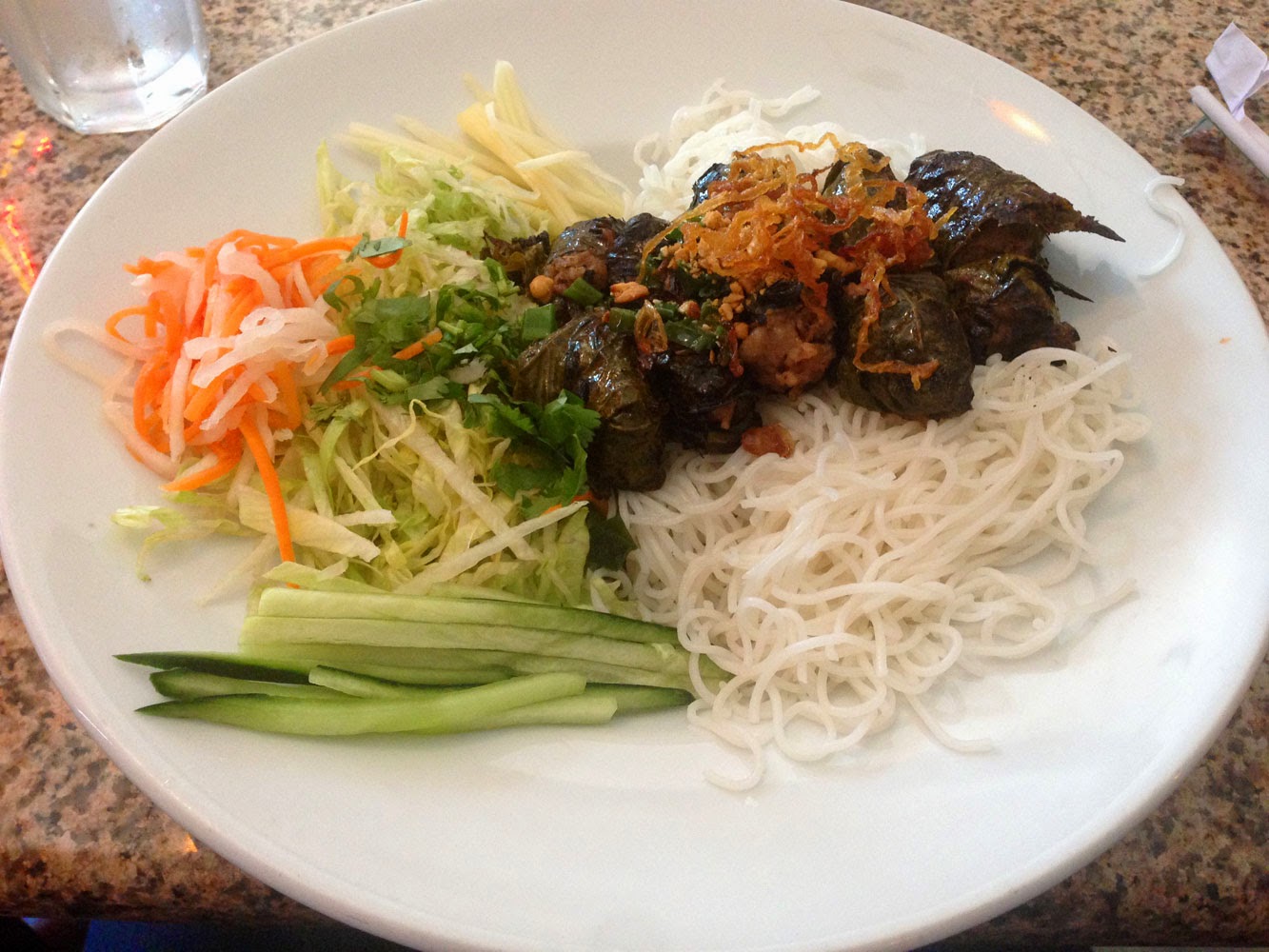 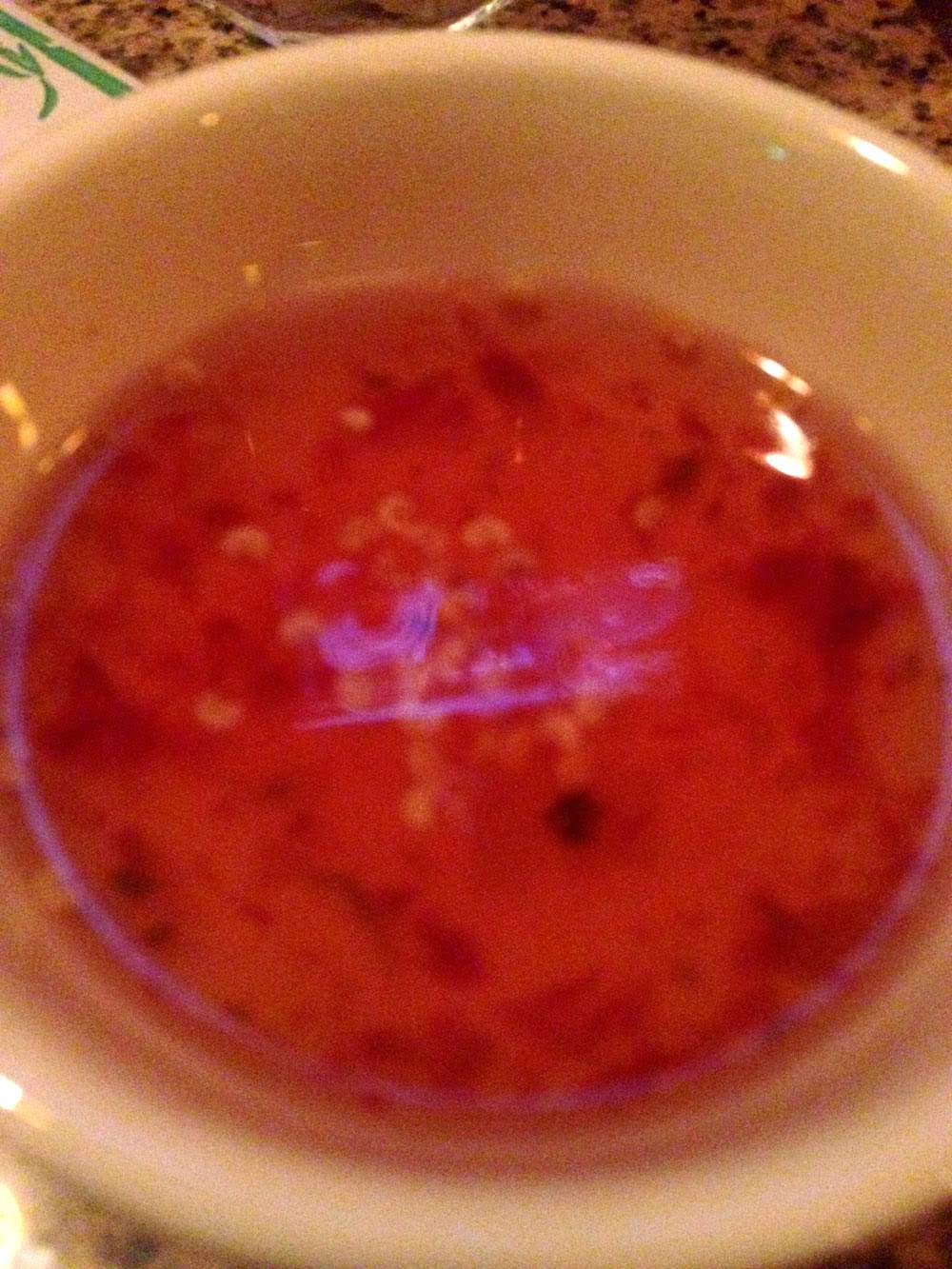 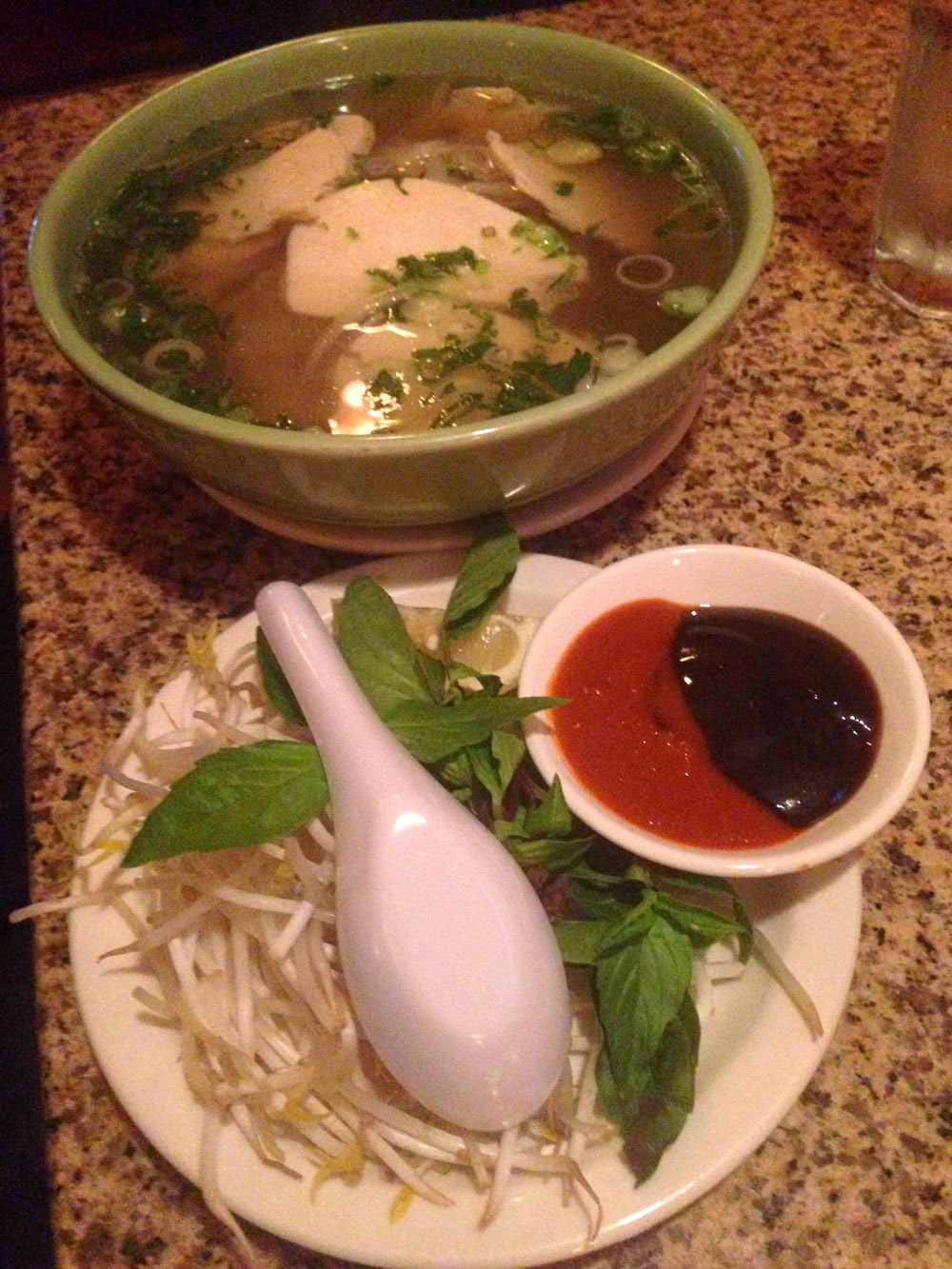 The second and third items that my group had were the Phở and one of the Indochine selections, the Ginger Chicken. We also had one veggie dish, the curry tofu with rice. 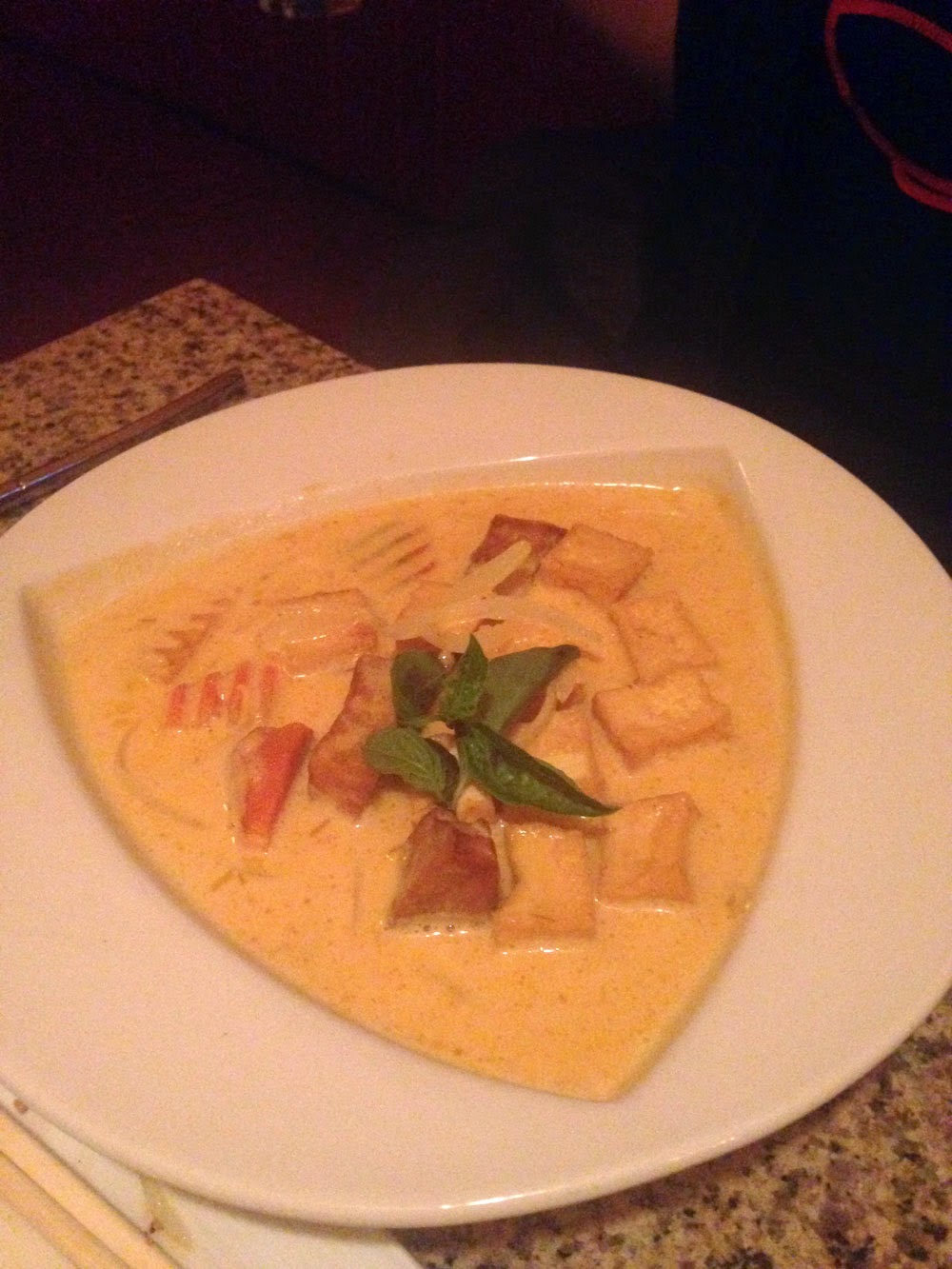 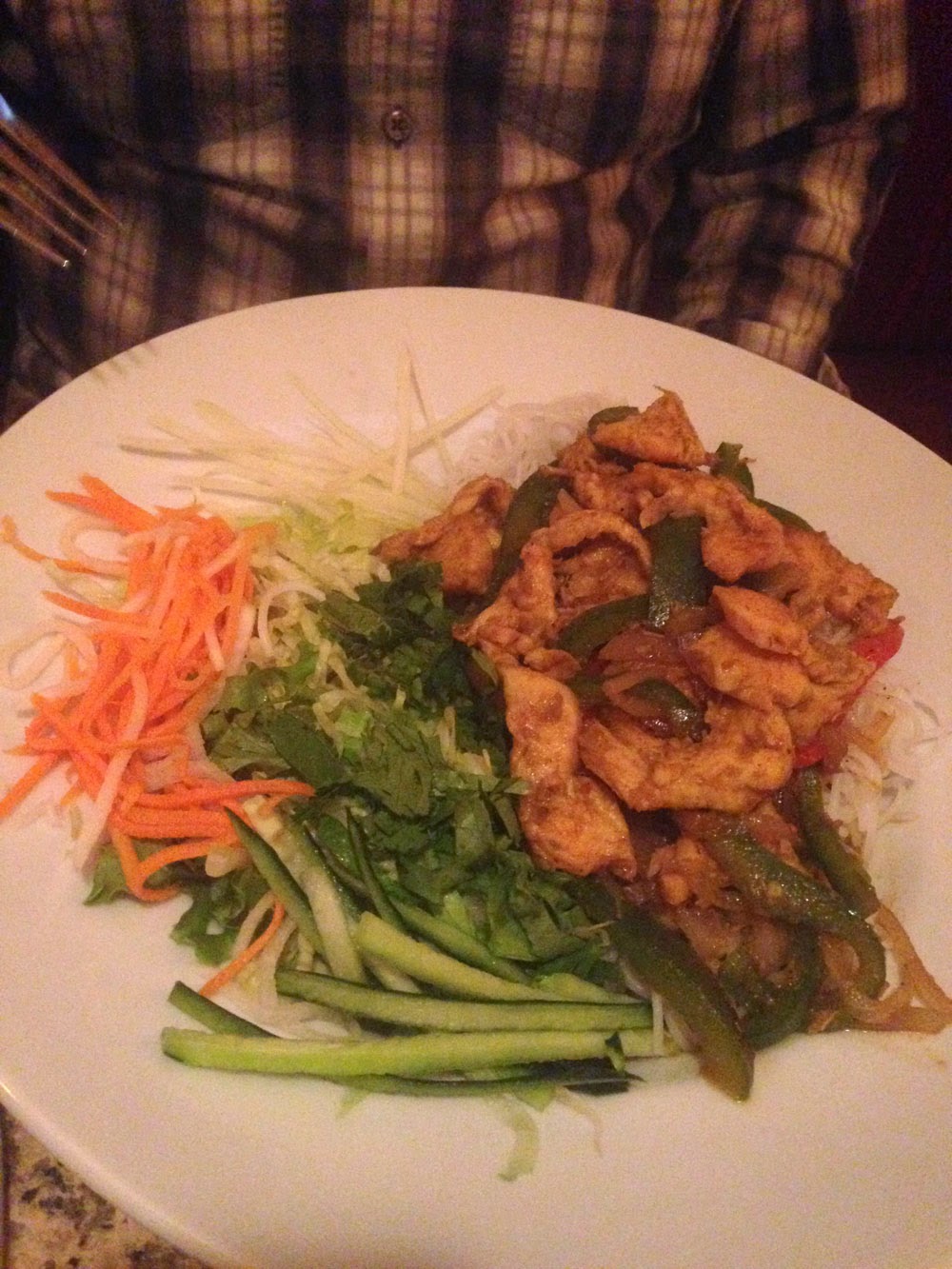 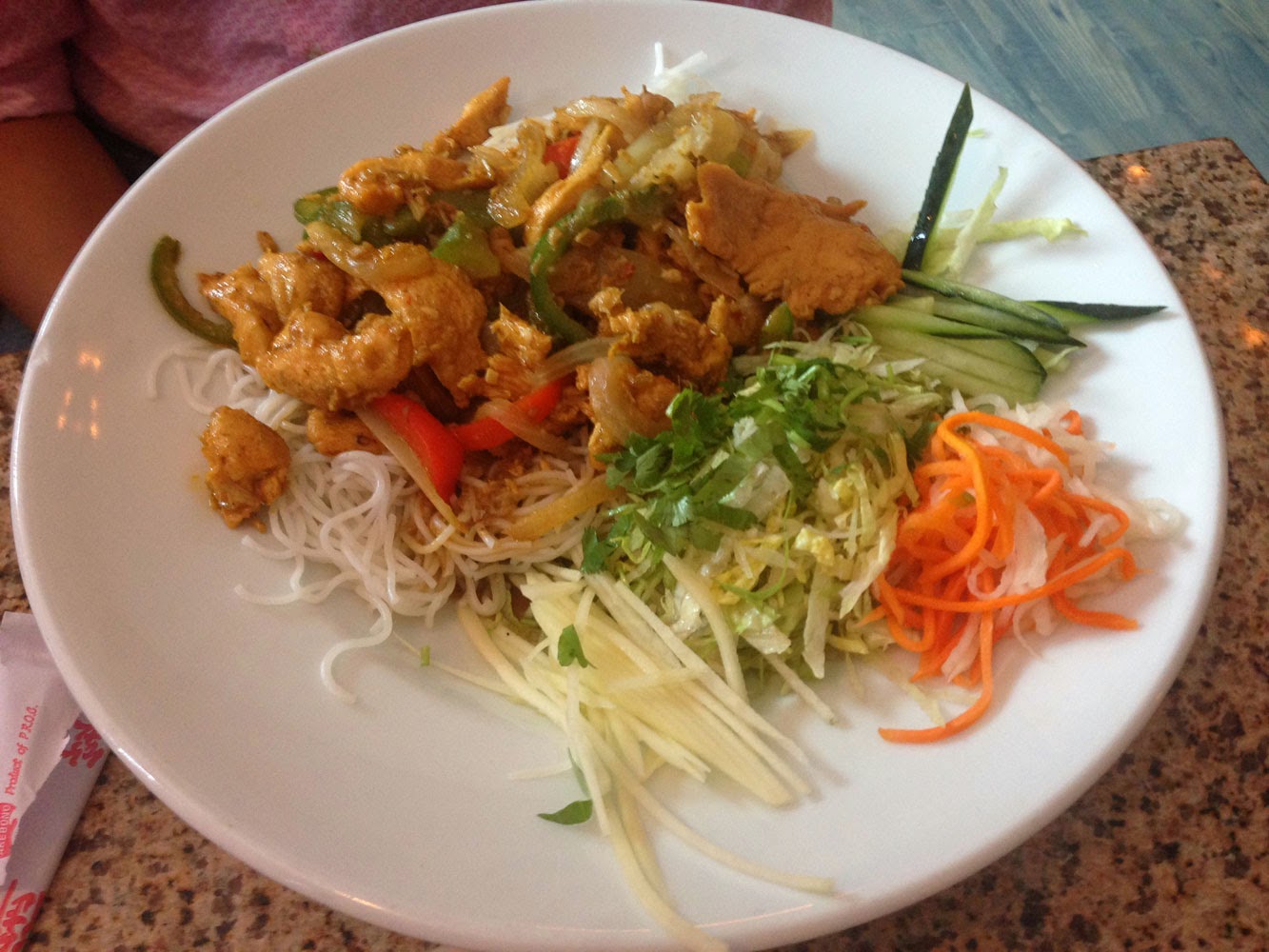 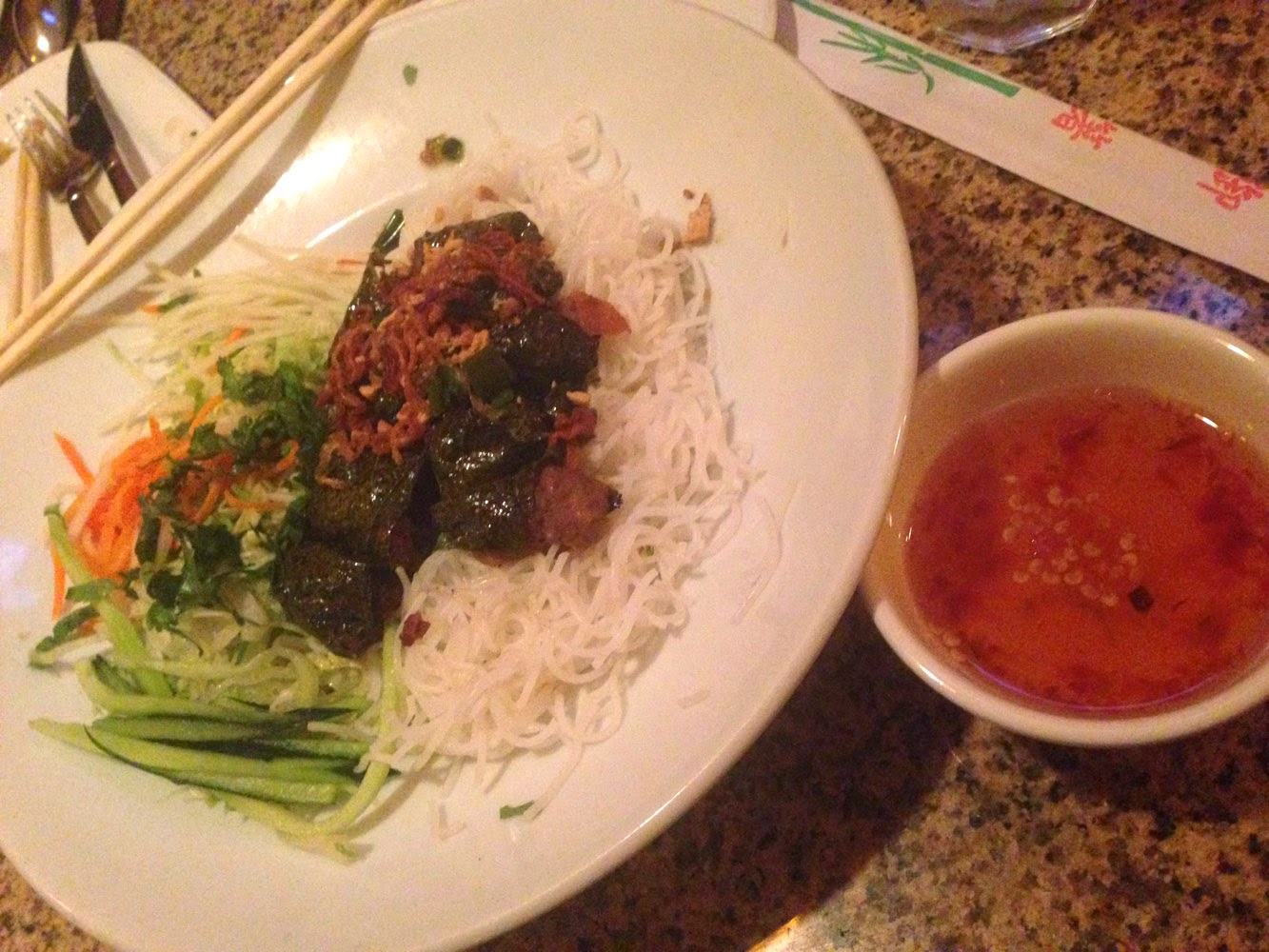 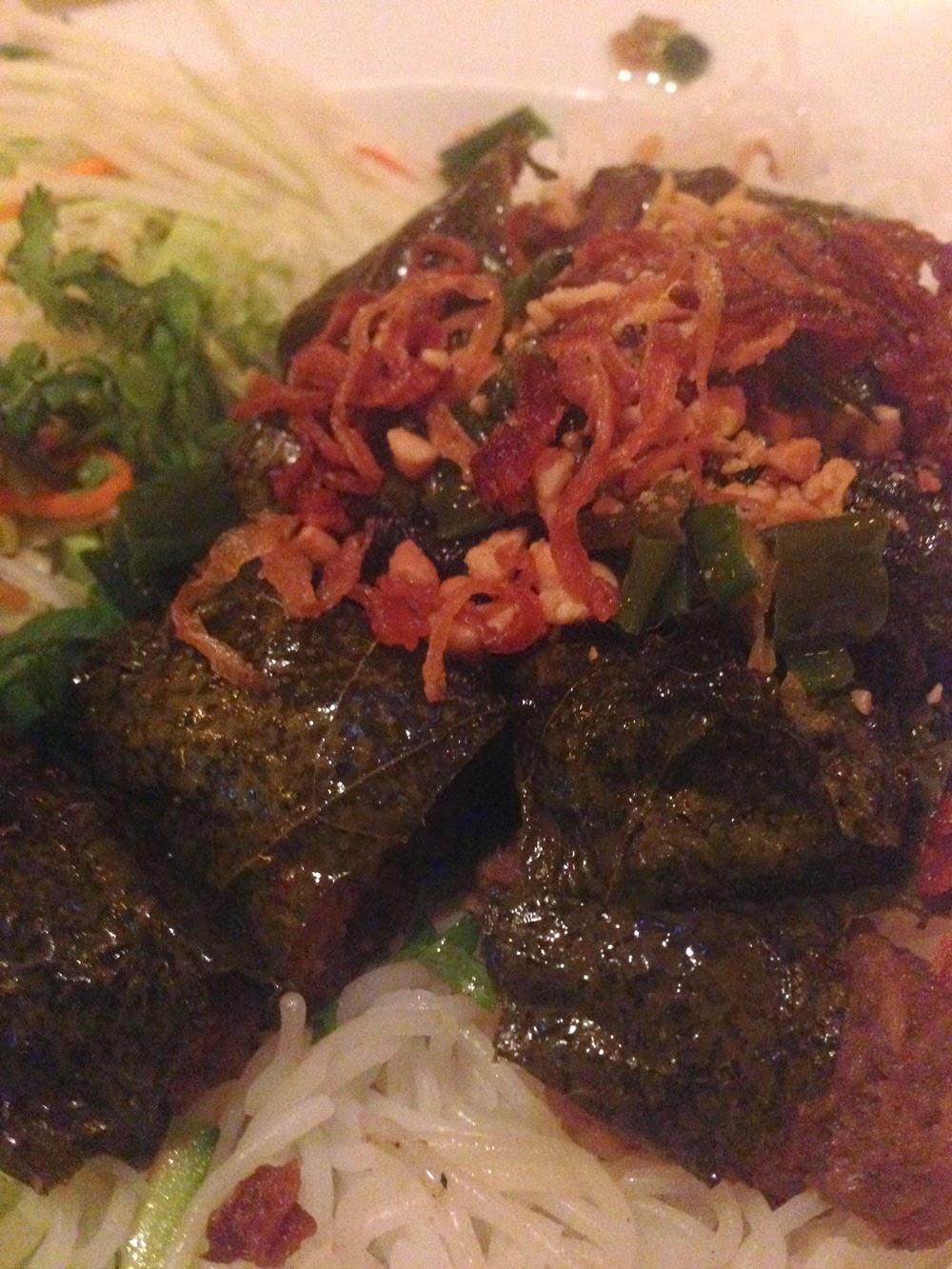 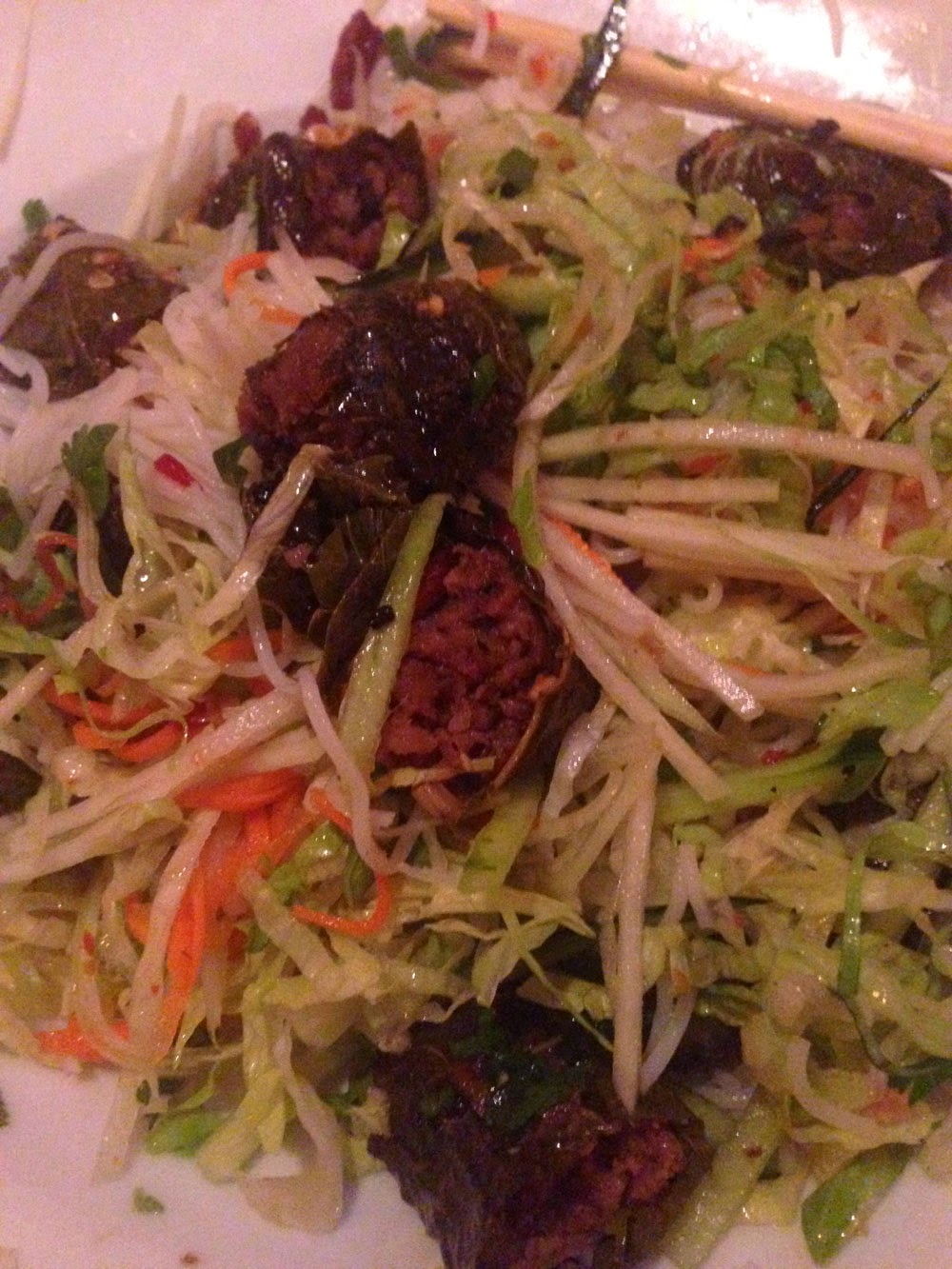 We started with some duck grape rolls (a good way to see if you like them without committing). All were quite good and satisfying. 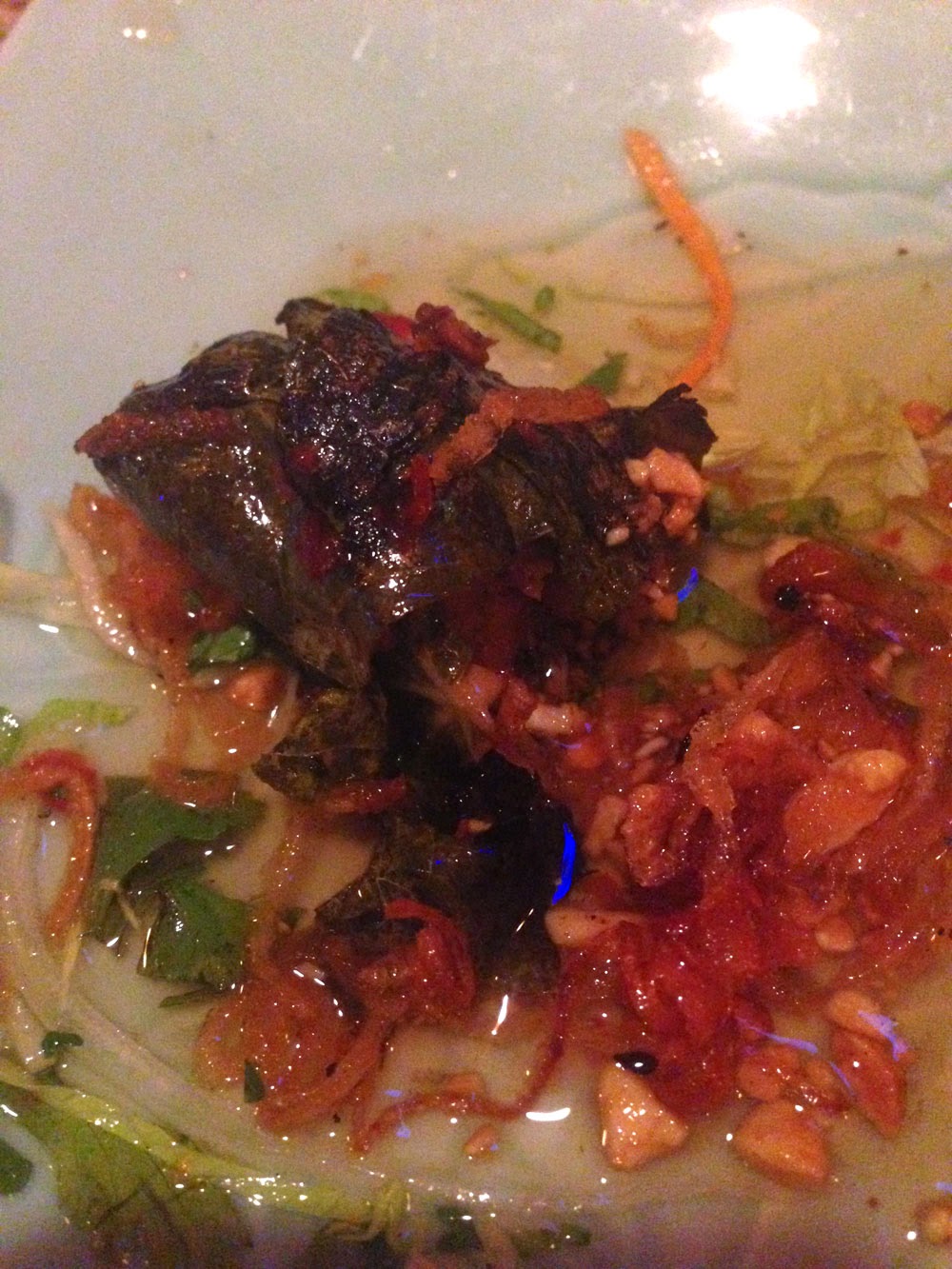 What I like about this restaurant is that through all the time I've been coming here for lunch and dinner, it's remained steadfast in it's food quality, and consistent in service. What more can you ask for? Elevating this one to 5 stars. 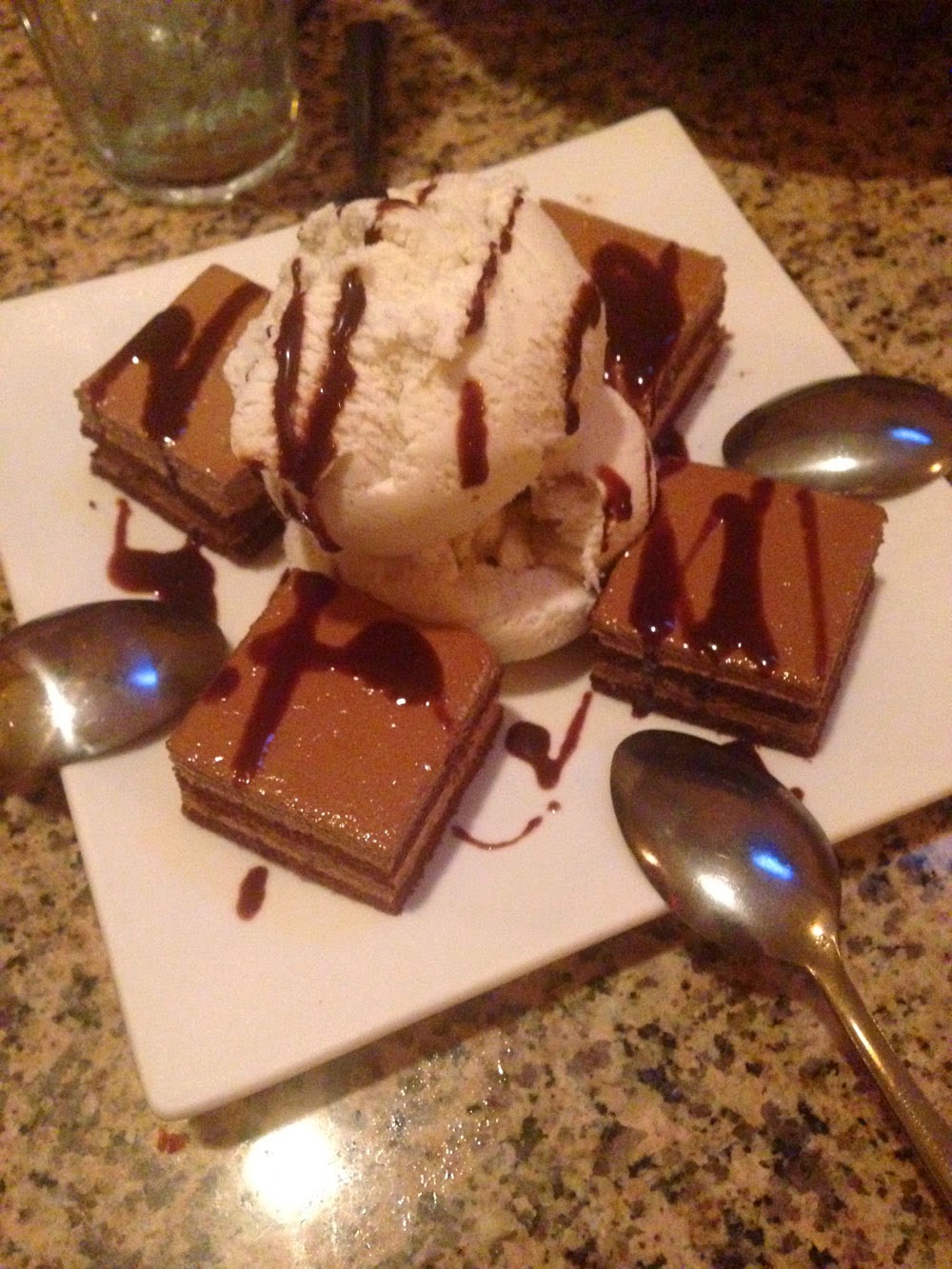 What I like about this place, is that I don't fell like I'm about to explode when we leave. I'm very satisfied but don't fell like I've over-eaten. Vietnamese food is just like that - it has an honesty and simplicity that emphasizes the components' freshness and doesn't try to hide anything.

My Yelp review from 2010.10.22:
I've eaten at Co'm about a dozen times - I think it was Robbie C. who introduced the restaurant to me (don't remember) and for a while it was a regular stop. The food here is very rich and tends to be on the sweet side - why we stopped going for a while. Last night we were on our way to Pho #1 and found it closed - since Co'm is at the next southbound intersection (behind the Chevron on the left) we decided to eat here.

When you walk into Co'm you get assaulted by the delicious smell of sweet grilled meats - if you've ever had Hawaiian food you'll know the smell. The decor is upbeat with these interesting photo-paintings of Siamese female models in rather awkward compositions. Everything in the paintings is very beautiful however the compositions are horrible (if you go. notice the angles, position of limbs, etc - they're very distracting). Rather than taking away from the restaurant, the images actually add to the experience - it's hard to explain but they just seem right in that setting. The music is upbeat and the staff (made up of younger Asian males) is super attentive. They both know their food and menu; and provide exceptional service and advice on what to order.

Co'm is a little different from the usual pho-fare you get at most Vietnamese restaurants - actually I don't believe pho is even offered (don't bother looking at the link for this listing for a menu - it's pointing to a very different restaurant in Dunwoody). The main dishes here are the Bun and the Co'm. With bun you get a jumble of noodles with fresh veggies on the bottom (they call it a "salad") and grilled marinated meats on top. You pour a fish-sauce mix over the whole thing and start wolfing it down - this is my favorite. With co'm you get a similar version of the meats only with a sweetened rice. They also offer the meats wrapped in grape leaves that have been grilled - sort of a fragrant  mini-sausage - for something different I'd go to one of these dishes. Shrimp is stuffed in a piece of sugarcane and grilled which I found very good and unusual.

I especially like the fresh shrimp spring rolls here - the ingredients aren't what you usually find - it's much more robust both texturally and with flavor layering (think of a typical soft shrimp roll then add some crunchy texture and a few extras and you'll get the gist). These are a must have. The menu prices are perhaps slightly higher than what you would find in a pho restaurant, but I'm only talking a dollar or two and you get a small complimentary dessert at the end (this may only be at dinner?). In all a very enjoyable experience - I would recommend middle-of-the-week dining as the weekends are very busy and noisy. I'm on the verge of giving the restaurant 5 stars - I hesitate as it's not a restaurant I can go to on a weekly basis - the food is a bit too rich for me.