It's been a while and I thought I would fill-in-some-blanks regarding some of my favorite destination spots - today it's about the Regal Hollywood 24 on the I85 access road between North Shallowford Rd and Chamblee-Tucker Rd. This massive mega-plex still has a few screens that are large enough to use for your favorite screenings. Most of my comments from way back in 2010 still apply (actually they all do I think, except maybe the comment about digital screens - I think they're all digital now) - see below for those. 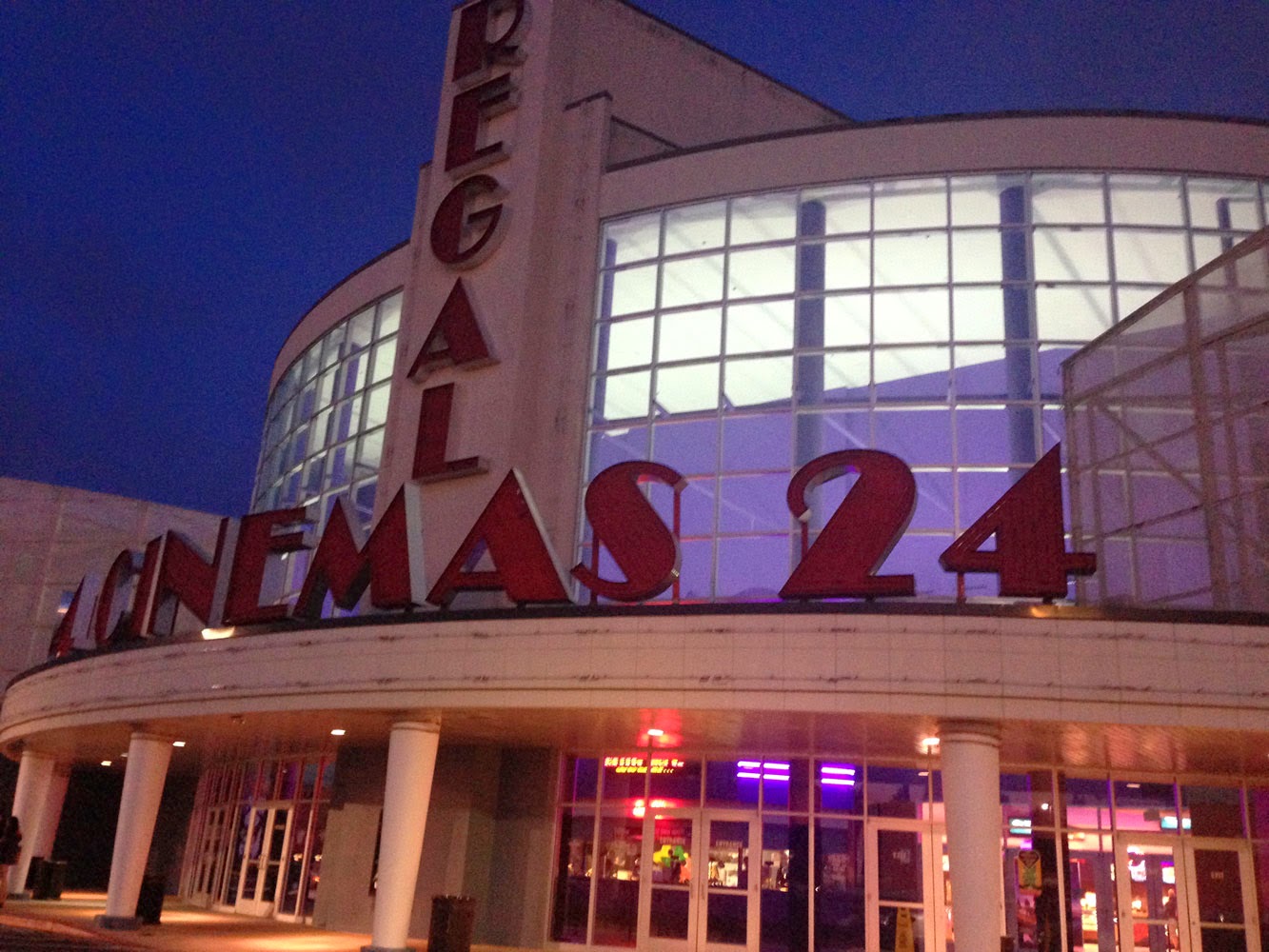 I love this location with all the neon - it's a genuine throwback to the "days of yesteryear" - bright lights, big expanses, big screens. What's not to like? I also like that the employees take the time to create mini-vignettes of upcoming movies - Spider Man in this case, and that there's enough room to put out the big signs - those 3-sheets are becoming fewer-and-far between - not at the Hollywood 24! 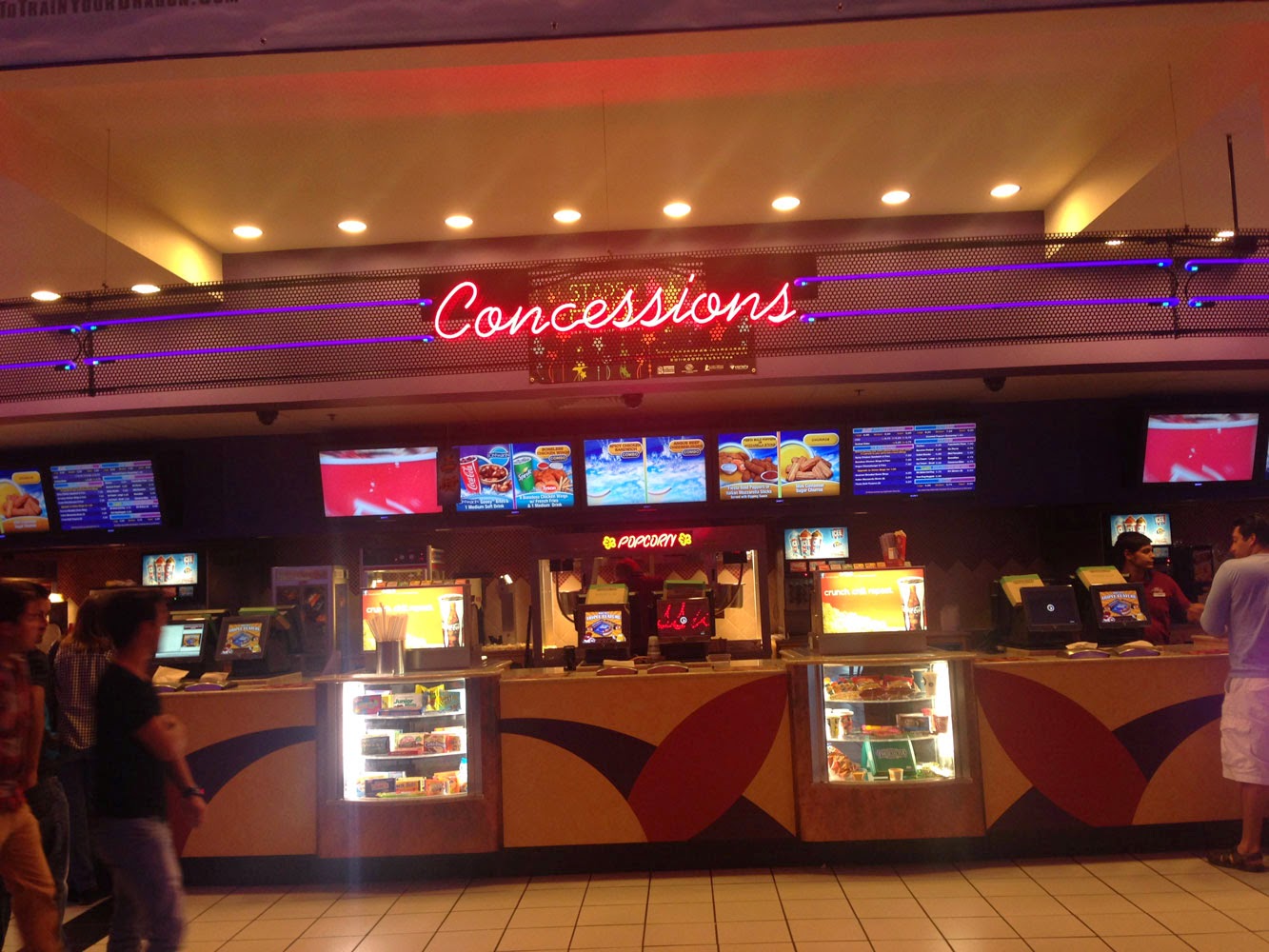 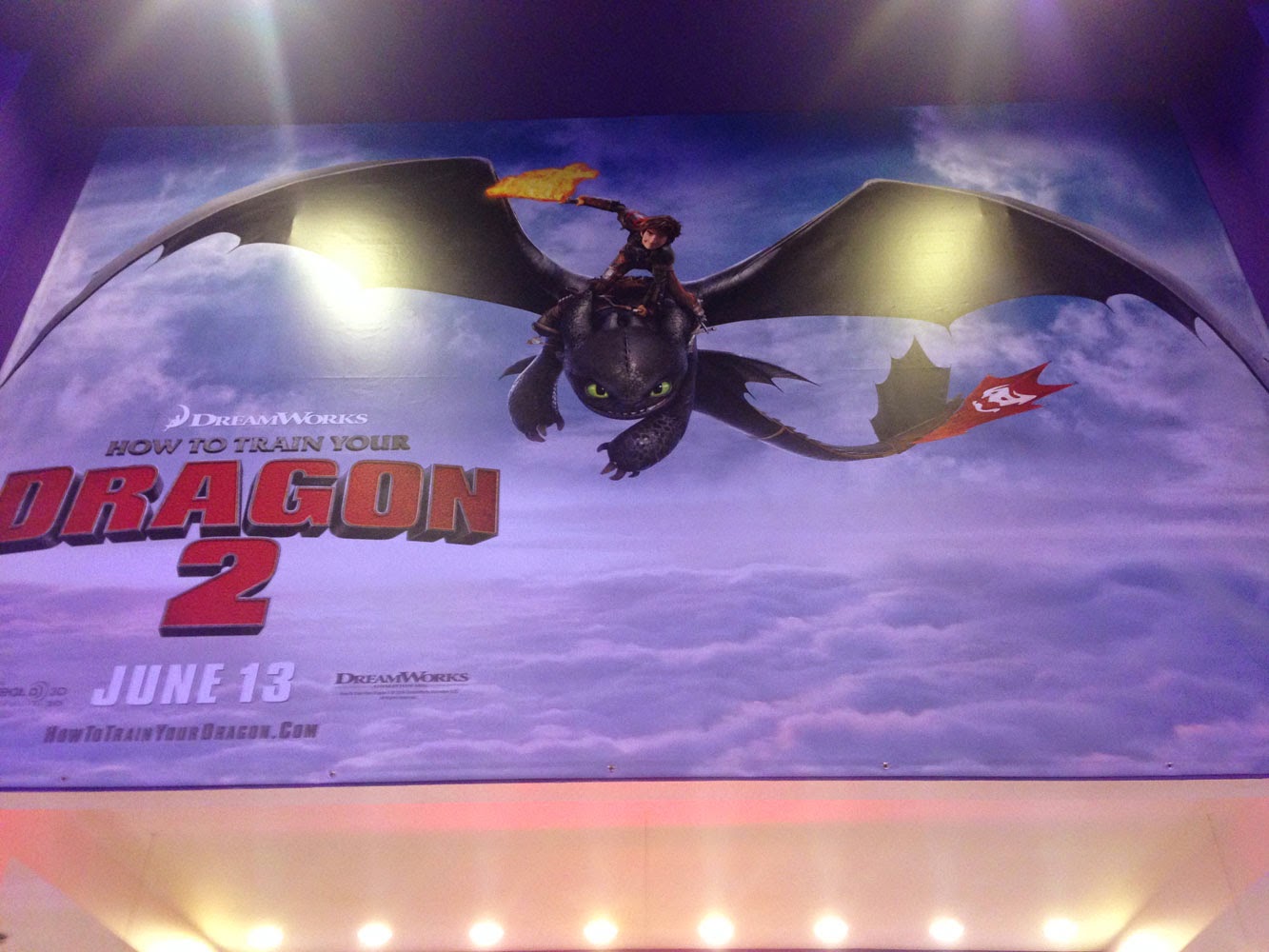 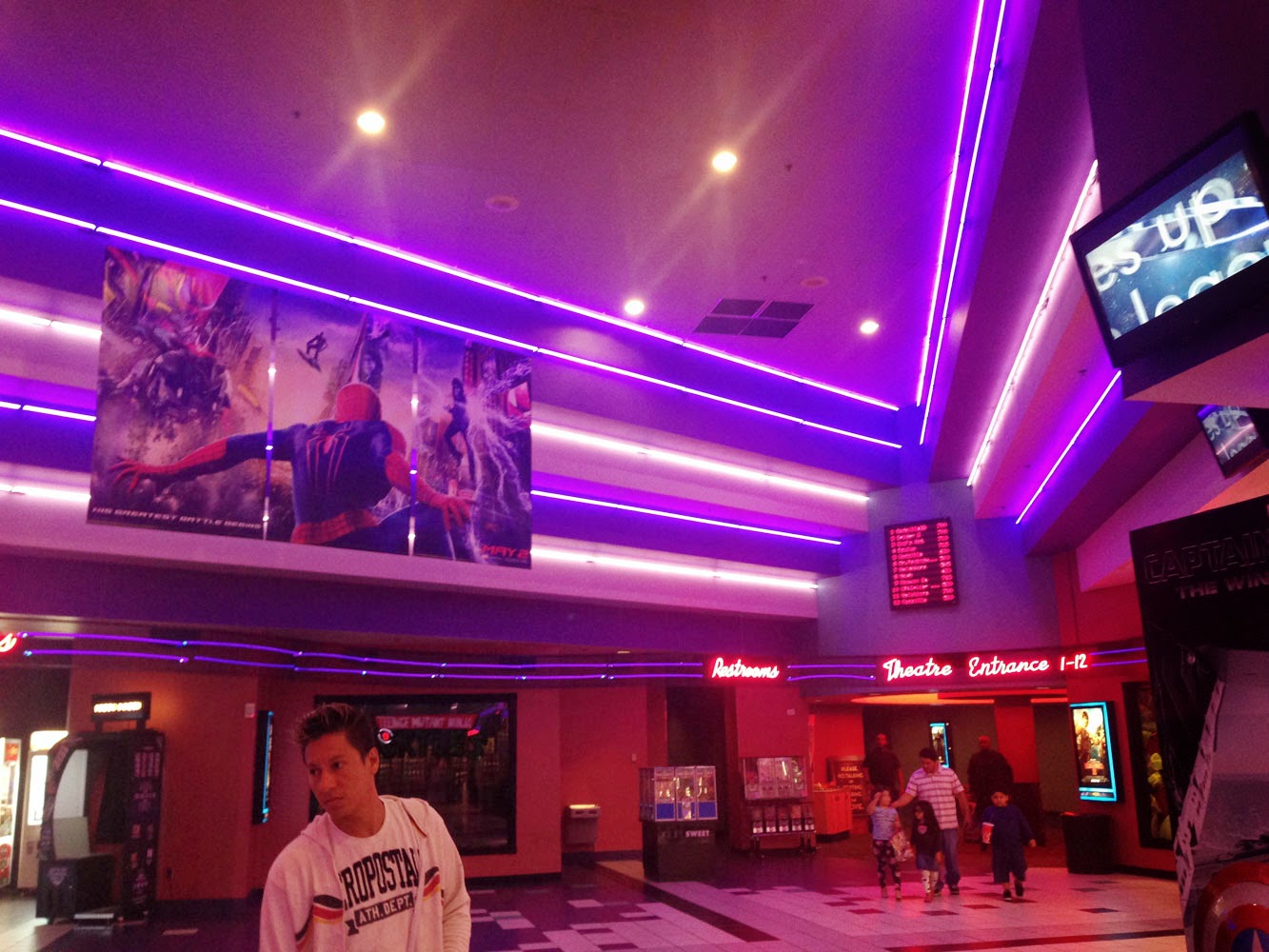 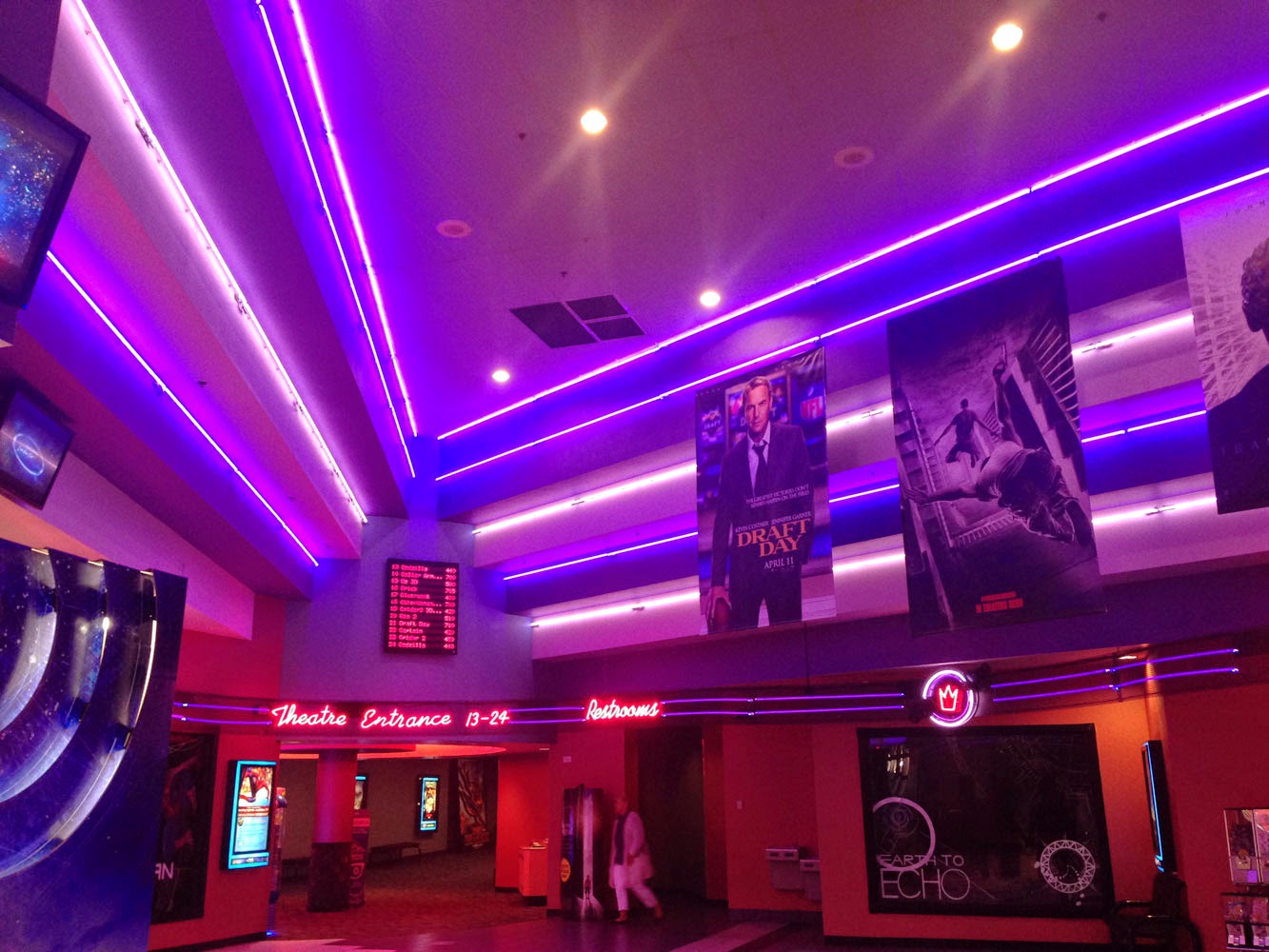 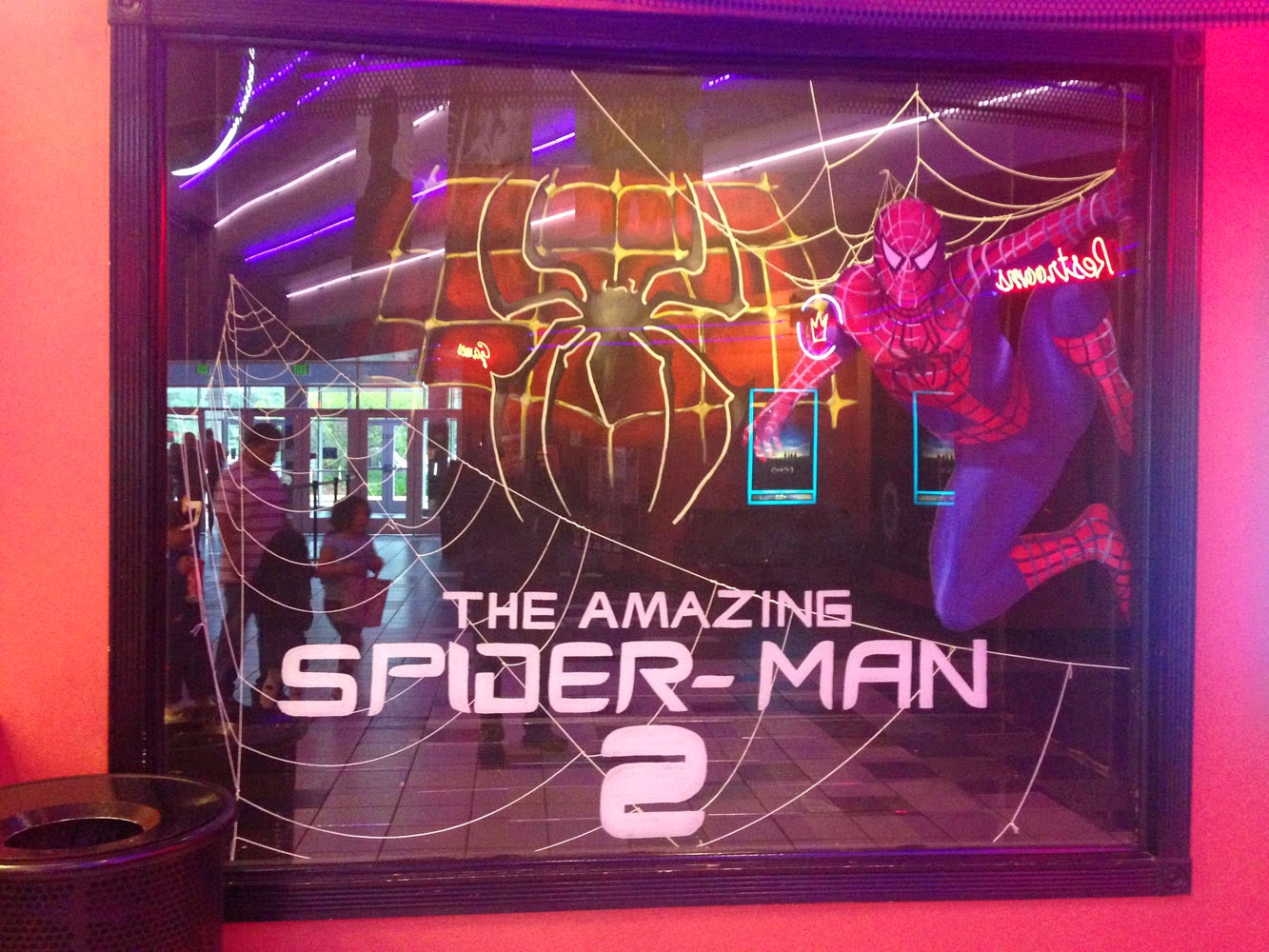 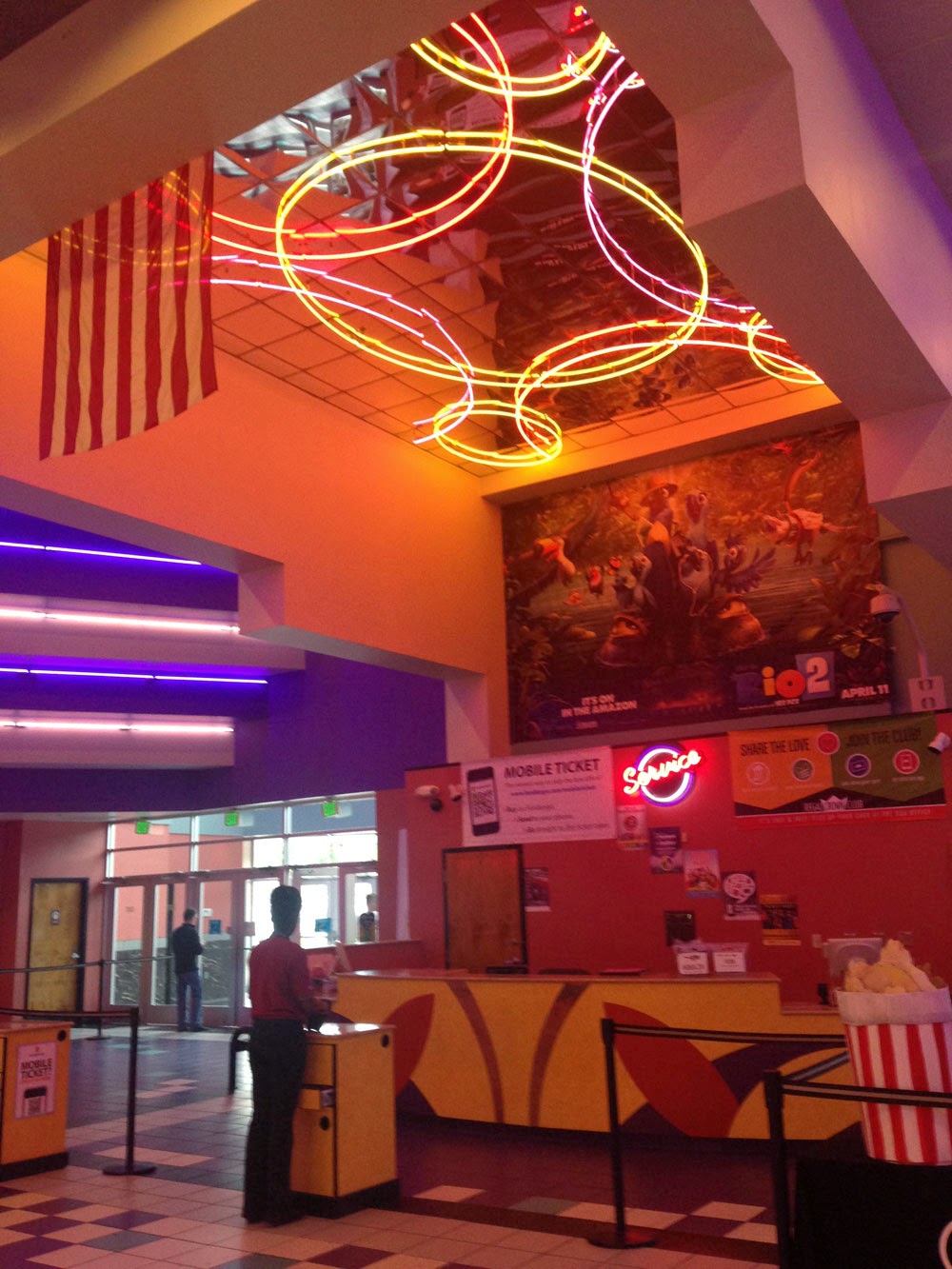 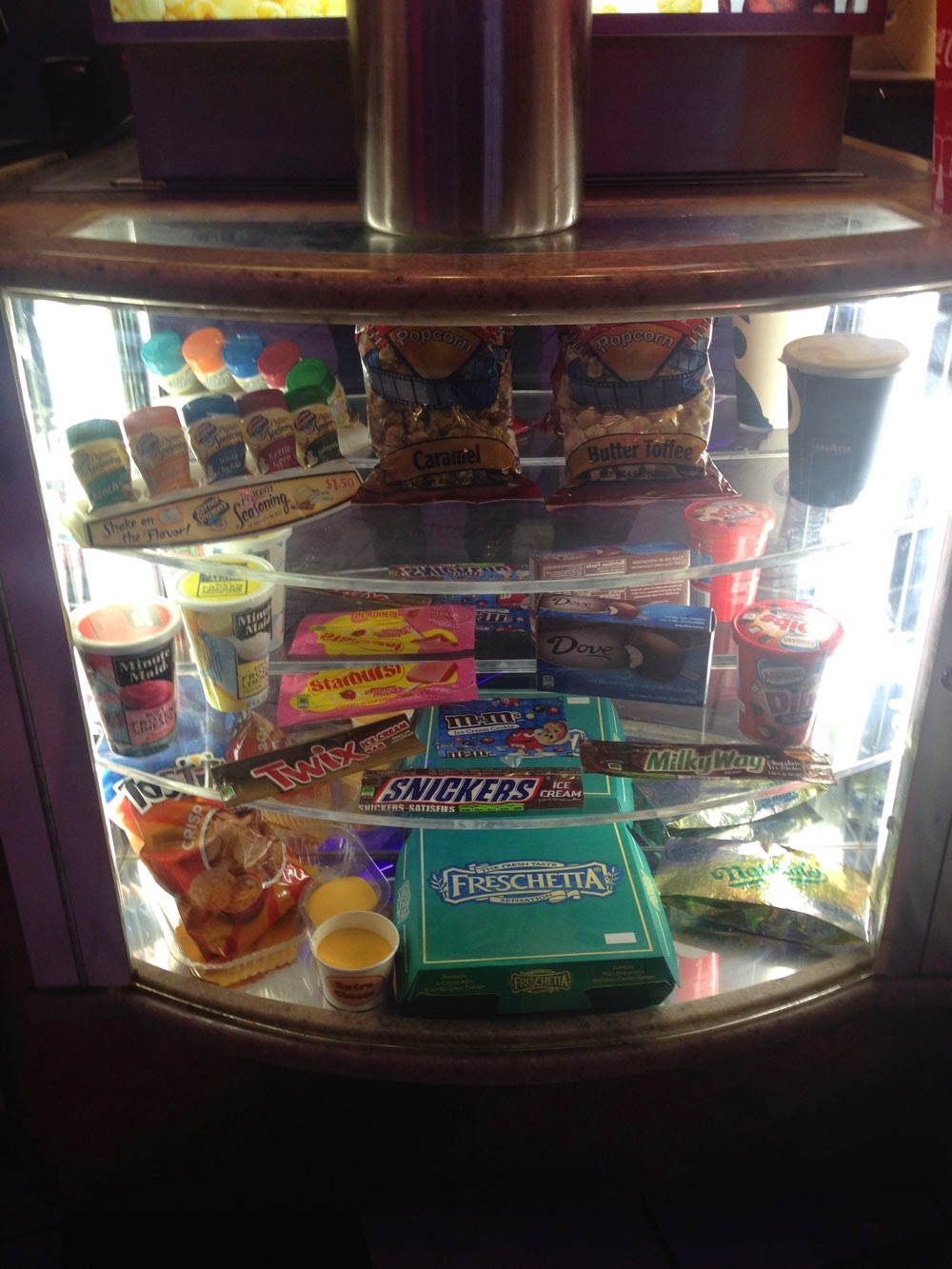 The latest film I've seen at the Hollywood is Godzilla, and I must say that size does indeed matter. I saw it first on a smaller screen at a Perimeter Regal location and it just didn't do it for me - the screen was so small that the 3D was rather annoying. On this night I saw the film in 2D and the bigger screen made it much more engaging. Simply fantastic - if you haven't seen it yet you definitely should! 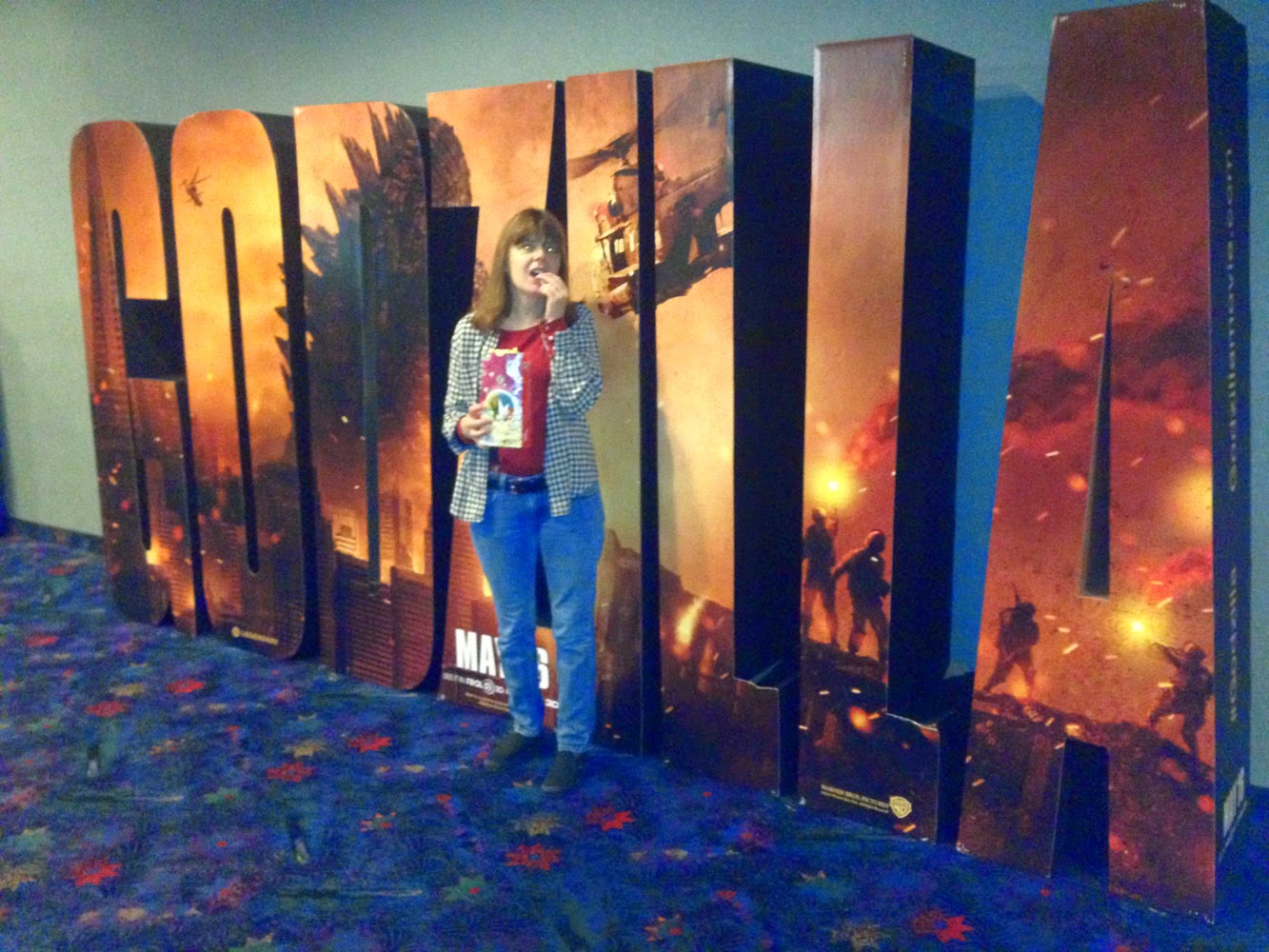 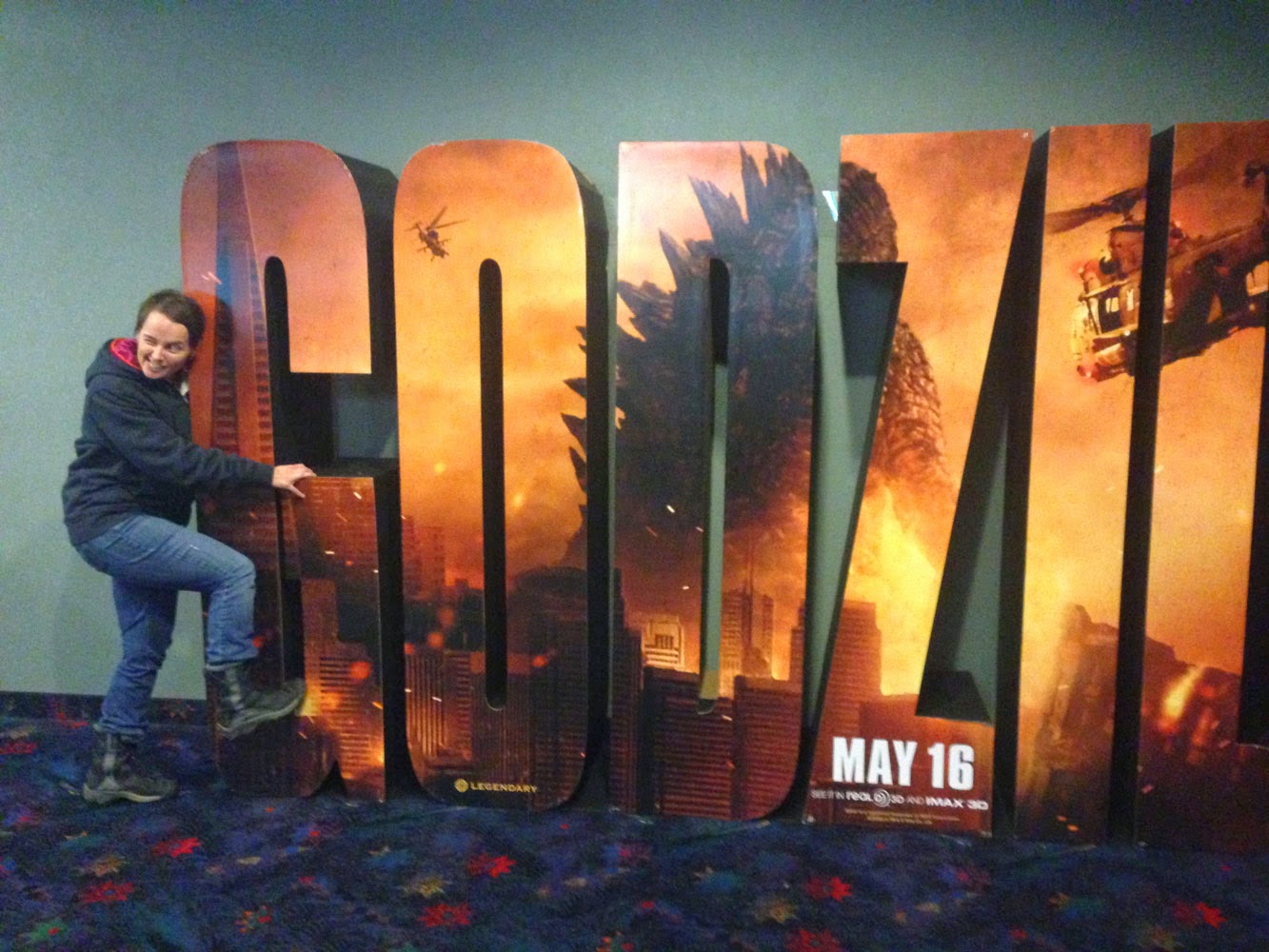 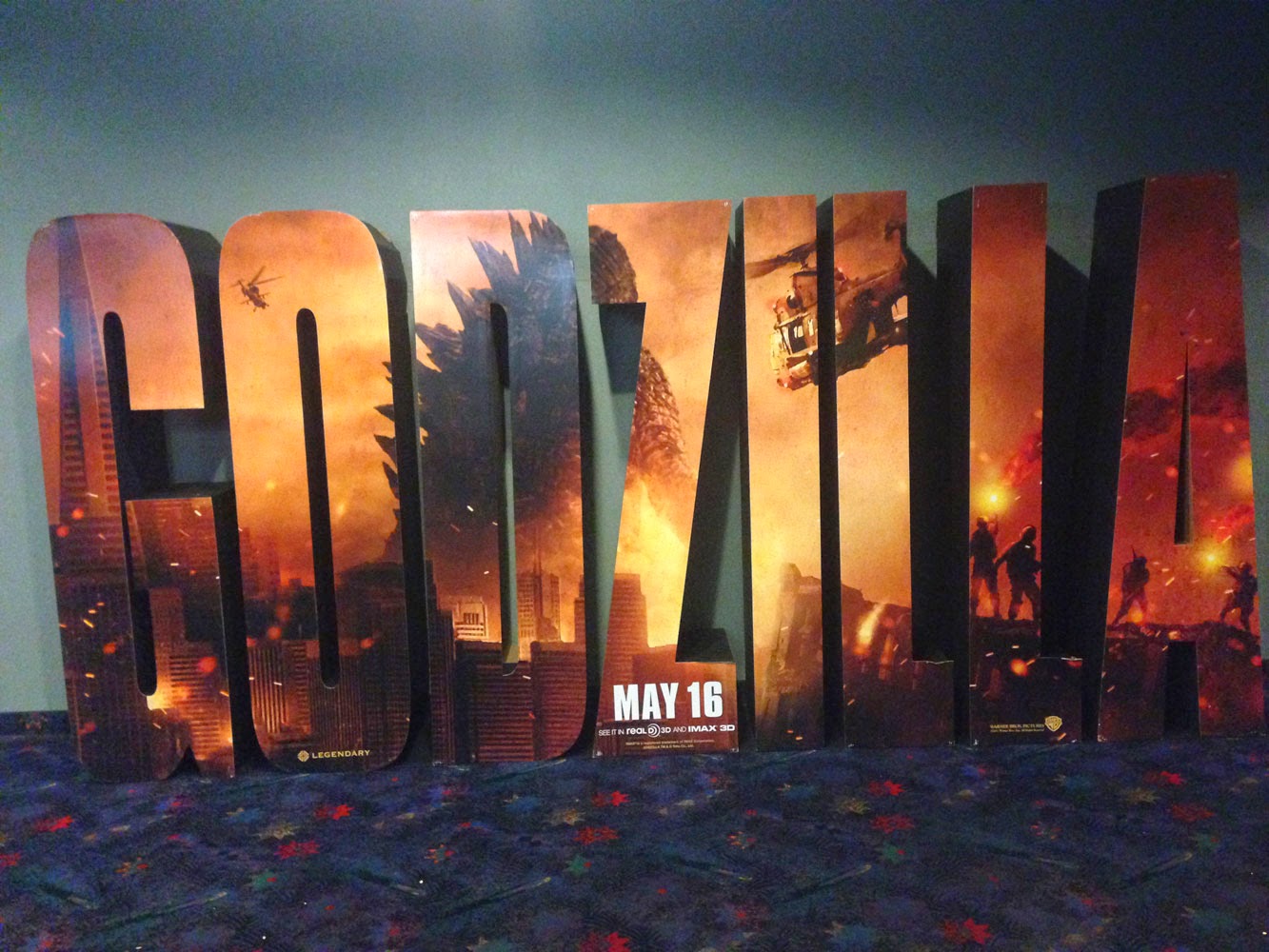 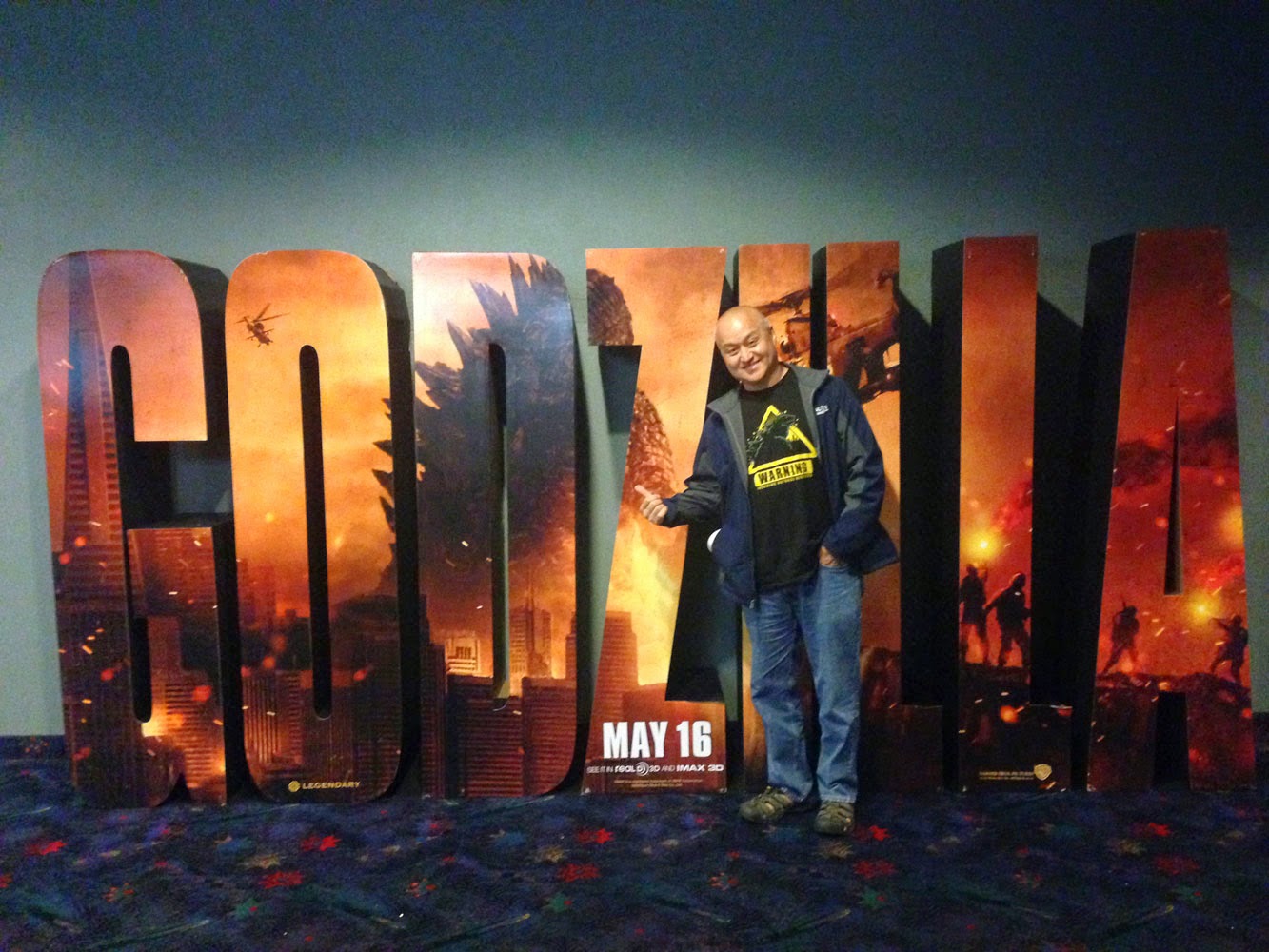 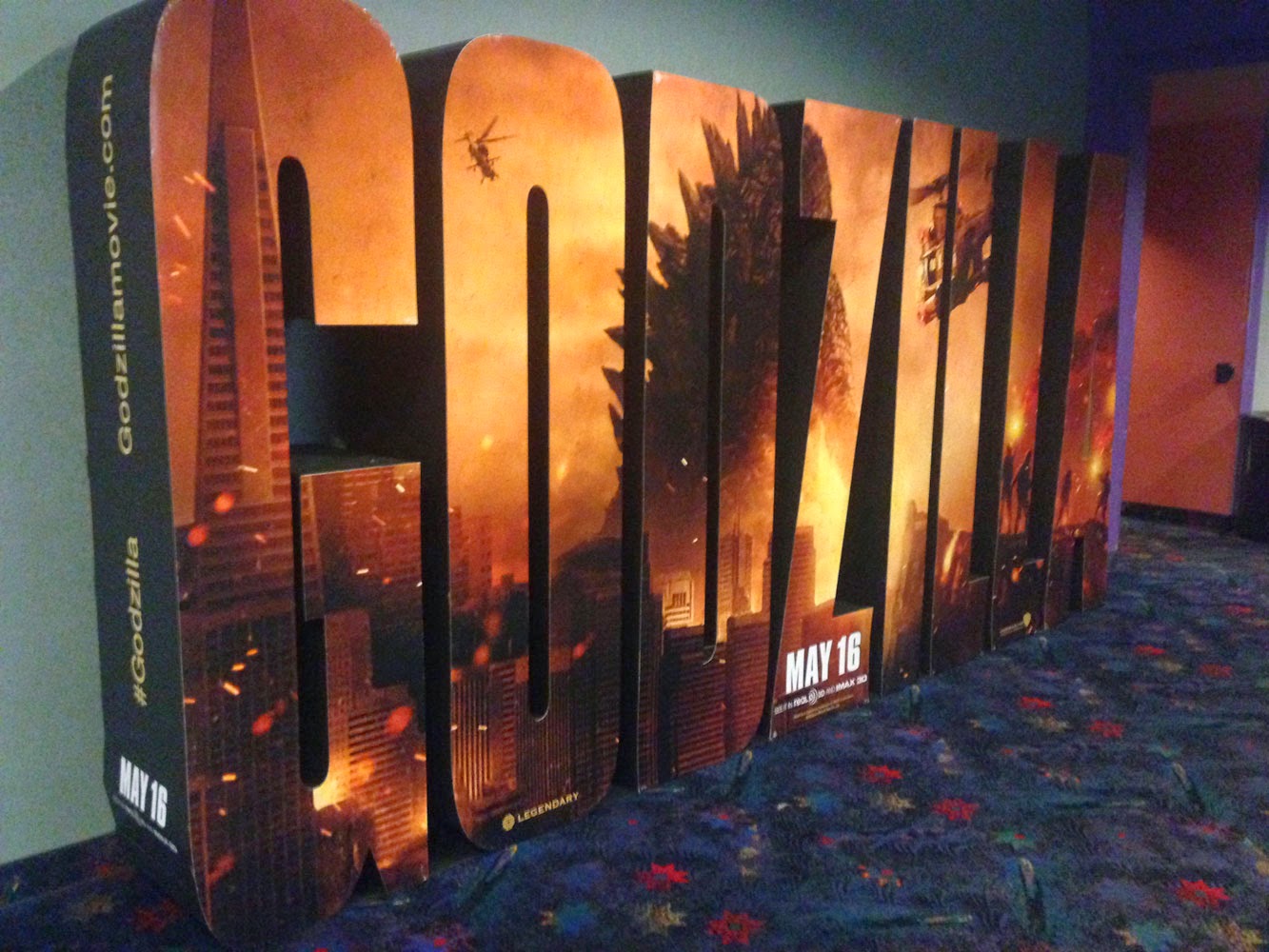 A couple of things to keep in mind - go early enough that you can beat the crowds both for the parking and to get through concessions - at minimum, have a "wing-man" save some seats while you gets the treats. Second, make sure you sign up for the Regal Rewards card - I get free popcorn, drinks ant tickets at fairly regular intervals so it's worth using the card - also use them at the concessions - the points add up. Third, if you are military or a senior bring out the ID or AARP cards - it's worth it on the price of concessions.
For the food, they serve Nathan's hot dogs - non better in my opinion. They've also started selling Freschetta Pizzas - they aren't big but they are better than the normal movie fare. The rest of the offerings are the usual - eat before you go so you aren't spending a fortune on snacks.
Finally, the best times to go are during the week - especially when it gets hot. I'm not sure if those couples with babies are there for the movies or to get out of an un-air-conditioned apartment, but the crying can be annoying.
(Originally posted on Yelp in a much shorter version, 2010.07.16)
This is an awesome theater and at one point was the best in Atlanta (since it's been built there are several others at least as good - some may be better - I've been to many in and around Atlanta but not all). I previously visited the same location when it was a drive-in (used to be their Hollywood 24 credit card receipts still had the old I85 Drive In name on them). I still hate the thought of the loss of that drive in (mostly due to memories of the weekend early-morning flea market - used to find great vintage stuff there), but in any case the replacement definitely hit the bill when it comes to movies.

The trick on the Hollywood 24 is to go see the film while the release is digital - (not sure if that's still true), then the screens get progressively smaller as the crowds thin and the movie is shown (the longer the movie is shown, the smaller the crowds - makes sense and allows the theater to show a movie longer without sacrificing the ticket sales for new films). The long-running films (or movies with poor attendance) end up on the itty-bitty screens which are at the extreme ends of the building.  The 3D screens here are also very good (most recently went to view Toy Story 3).

Other things to like about this theater: the management in general is exceptional - they do a great job troubleshooting problems and seem to always be very nice to customers. The theaters and seating are well maintained and relatively clean (another reason to go during the week) - the staff seems to have a bit more pride than your usual summer-job lackadaisical newly-graduated punk - that's a boon in itself. Don't get sticker shock - this is one of the more expensive theaters in town. However I don' t mind spending a bit more for cleanliness and service. Try to get your seat in theaters 12 or 13 as they are the largest.