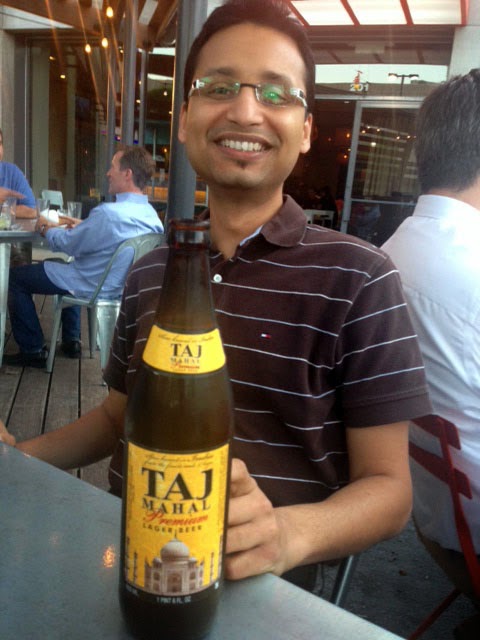 I've previously eaten at the Bhojanic location in Decatur on Clarimont Rd and welcomed the opportunity to eat at this newer location. This Bhojanic, I believe has only been opened for around a year. You'll find it in the shopping center to the right facing the Mall from Peachtree (it's anchored by a Crate and Barrel retail location) - Bhojanic is in the "crook of the elbow" - there's a wood-slat blind holding outside seating. The interior is modernist-trendy with interesting art and an open bar. 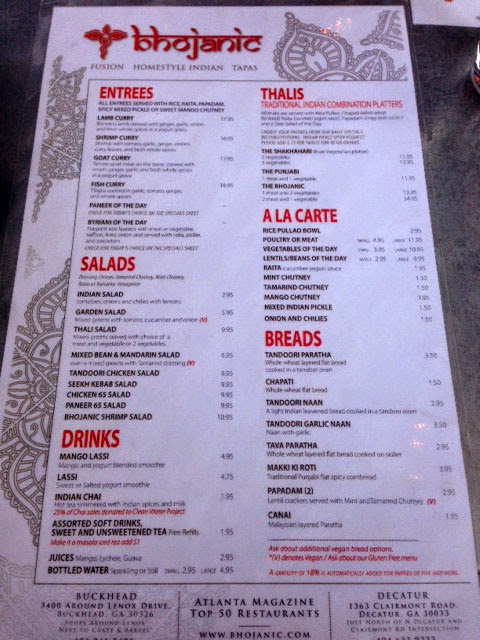 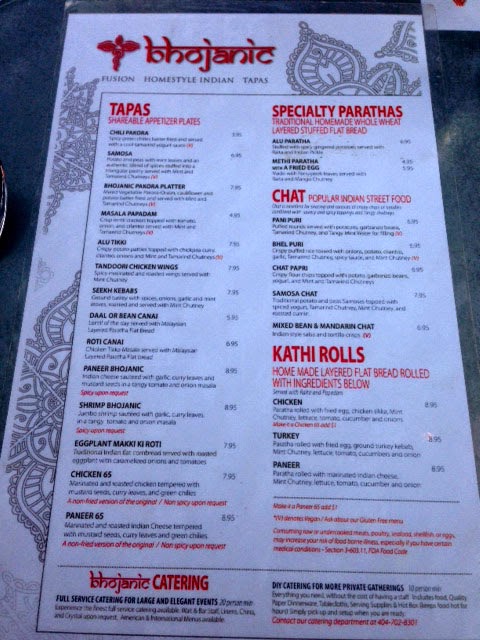 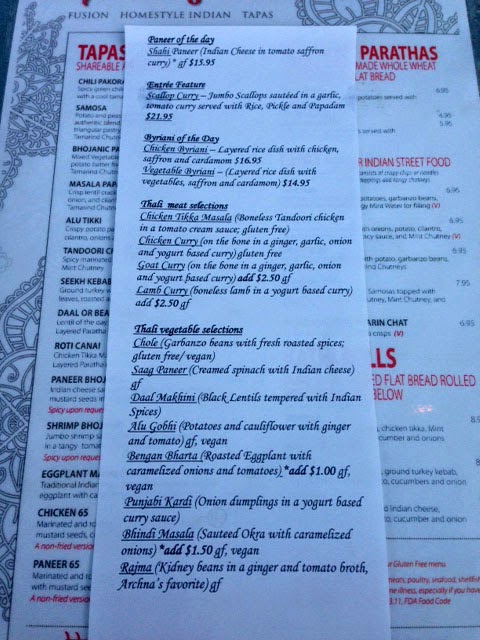 The menu is interesting and highlights the idea of both serving traditional Indian cuisine and Indian-food-as tapas. If you think about the various dishes found in Indian cuisine, tapas (Spanish for "small plates") is an excellent vehicle for allowing diners to sample many different elements in smaller portions, so you aren't limited by the size of your party. 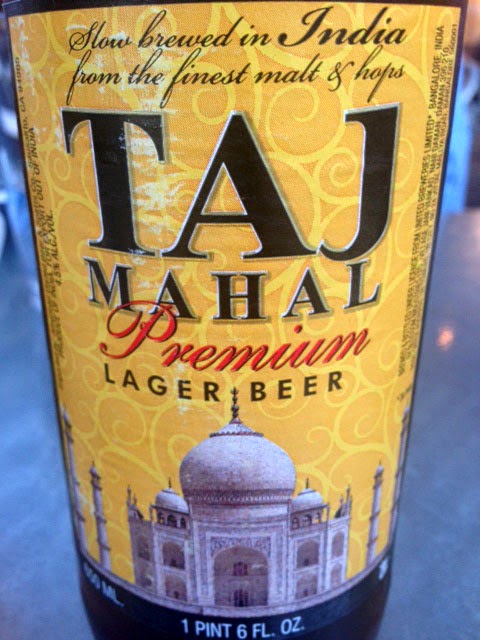 For this, my first visit to this location, I attended with some visitors from Boston (Pranay and Tom) and my local friend Siddharth. We ordered a few beers (including an excellent slow-brewed "Taj Mahal" - after traveling to India I've found that for some reason this beer isn't really available IN India - it's also owned by the parent of Kingfisher, United Brewing but is virtually unknown there). After studying the menu I invited Siddharth to order from the table. He chose three entrée dishes and some various breads:

Lamb Curry - this curry was dark and rich and wonderful with ginger, garlic and turmeric as the predominate flavors - in retrospect we should have ordered the goat instead (for some reason the Indians call goat "mutton" - I've always used that term for adult sheep). The meat was lean and slightly tough (but I've come to expect that) - goat has a similar flavor and tends to be more tender, if a bit more greasy.

Chicken Tikka Masala - this is the classic chicken curry (most Americans call this "butter chicken" but then again, with enough ghee everything is!) - here's the Tikka is creamy and bright orange, with meats marinated in curd (yogurt), heated with spices and finished with a tomato puree. Delicious.


Sag Paneer - this Northern Indian spinach dish was one of the best I've had recently - chunks of paneer (fresh milk cheese) tossed in spices and spinach.

Garlic Naan - as above but with garlic (appeared to be garlic powder - for some reason I haven't been able to find a good fresh-garlic naan in the US - the closest to what I sampled in India is at Heart of India on I285/Chamblee-Tucker).

Tava Paratha  - this is a whole wheat, layered and skiddle-fried flat bread

The dishes came with a really delicious long-grain basmati rice - I loved the consistency, a bit buttery with a hint of cinnamon. Also a few papadam (lentil crackers) and spicy mixed pickles to add a bit of variety to the dishes. 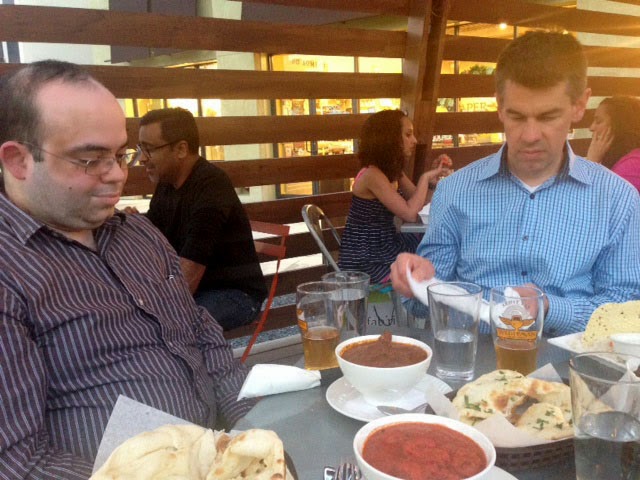 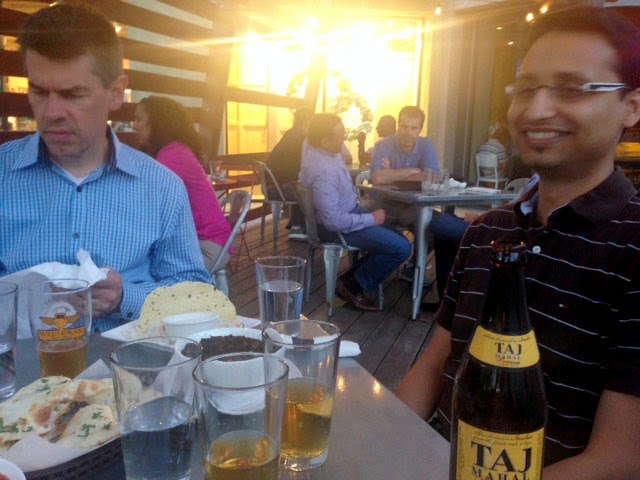 We finished the meal with a couple of  unusual (for me) pistachio kulfis - this is basically an ice cream packed with pistachios and served with a rice vermicelli (on top). First time I've had it prepared with the noodles - seems it's a common thing around Calcutta.

We had a wonderful experience with the food - I had seen some posts about some dishes being salty and this was not the case when we were there. The service seemed very slow to us - by the time the beers arrived we were quite thirsty.

The next time I visit I'm going to try some of the tapas dishes and will probably do a thali - this is a combination dinner served in a stainless steel, compartmented cafeteria tray (this type of service is very common in India). I'd also like to try the fish curry and the tandoori chicken (have to save some stuff for follow-up, right?).