You can find Dish Korean Cuisine at 5000 Buford Hwy NE, Ste B-203, Chamblee, GA 30341- this is the storefront adjacent to the very popular Food Terminal Malaysian restaurant in the City Farmers Market shopping center about a block north of the intersection of Chamblee Tucker Rd and Buford Hwy. There's plenty of parking towards the Farmers Market if there isn't anything near the building. You'll need to climb some stairs (or take the extensive ramp) to access as the side is elevated to compensate for the hill (the Farmers Market is in the valley overlooked by the streets). 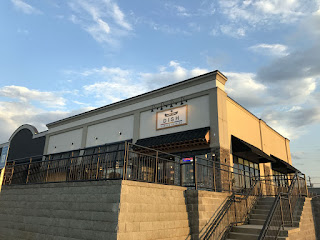 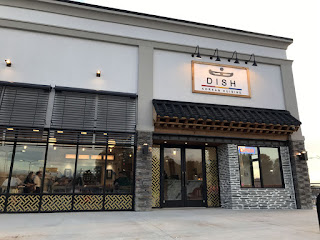 I had dinner with John F at Food Terminal and he mentioned that we should try Dish next, so this past Wednesday we dropped in, joined by Michelle T (both fellow Yelpers). The building and decor are refined and on the side of upscale - I was told that the restaurant had just opened 3 weeks ago as a soft-launch and that they still hadn't had a grand opening. I had a few minutes to kill and asked some people that were leaving what they thought - the opinions were overwhelmingly positive (they all appeared to be Korean). I immediately fell in love with the interior - lots of clean lines with real wood and stone. There are a couple of private rooms including something behind the host-stand with massive sliding doors - quite beautiful and functional. 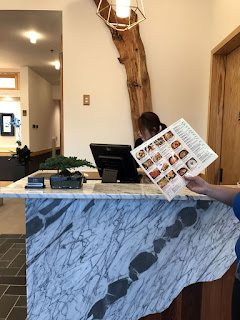 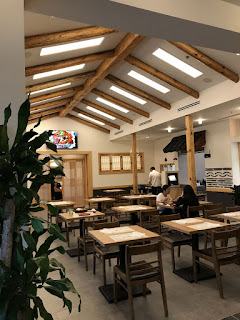 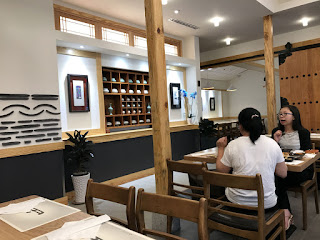 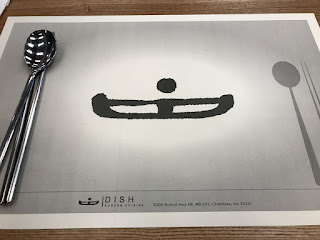 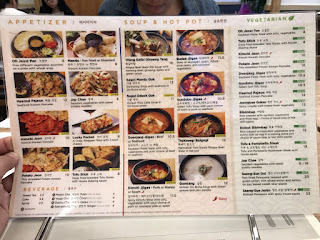 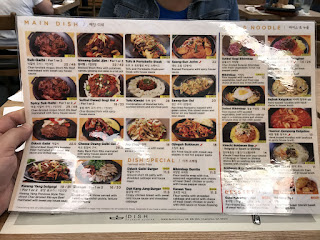 Seated we were asked about drinks and opted for water (the other option was the traditional barley tea "bori cha") but I prefer to drink this when it's a bit cooler. The menu is a double-sided laminated card with full color photos and descriptions - quite nicely done I thought. We decided to try as many things as we could in a single setting - with 3 people that's 3 entrees and three apps. I grew up eating Korean food and there was a lot on the menu I hadn't yet experienced - like the use of cheese. We had cheese growing up but I don't remember it ever being incorporated into the Korean cuisine - I'd call this restaurant Korean Fusion due to this. 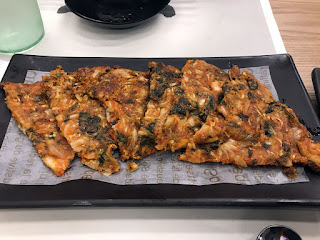 Kimchi Jeon Appetizer - Kimchi Korean Pancake - this looked a bit different from the photo and appeared to be from about a 10 inch pan - you get 6 slices - there's quite a bit of green in the pancake - not sure what that is as it didn't seem to add much to the dish (other than color). Growing up this was one of my favorite mom dishes - it was good but not great - mostly due to the kimchi not being pungent enough. The restaurant is new and I think they need a bit more time to ferment their kimchi so this should improve. The consistency was a bit loose - I think they need to add a bit more batter. This is served with a bit of soy/mirin mix for dipping. 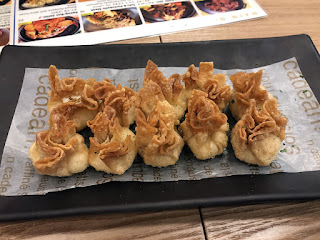 Lucky Pocket - A crisp wrapper filled with cream cheese - this was unexpected to me so of course we had to try it. These were a bit like mini-crab rangoons. Tasty and I liked them, but unusual to me so I'm not sure if other Koreans would like them or not. 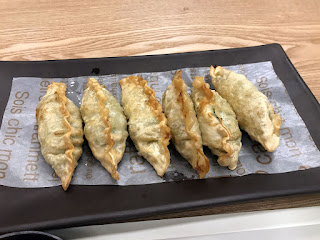 Pan Fried Mandu - these are traditional Korean dumplings (there's a typo on the menu describing them as Kimchi Korean Pancake). These were quite good - my mother would add pork or beef to hers but I liked these quite a bit as did my two dining companions. 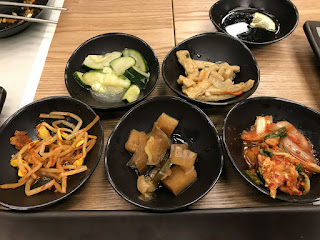 For panchan (the pickled side-dishes) we were served five - most of the Korean restaurants close to inside I285 serve 7 (not sure why the custom is to serve them in odd numbers). I hope they get to that point but once again it takes some time to prepare these pickles. As already noted, the classic napa cabbage version needed a bit more fermentation - that should fix itself within a few weeks with the weather turning hot. This is served with a bit of ponzu-like sauce for dipping.

For entrees we wanted to maximize the experience with three different types of meats. I would have liked to try a soup but they can be a bit cumbersome when sharing so we tried to find things that were easy to pass around or grab from a pot/pan. 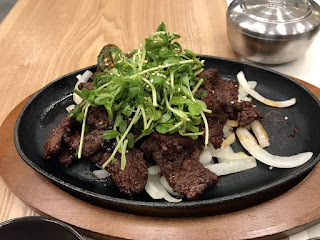 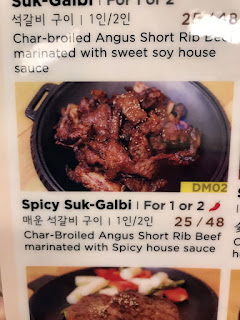 Spicy Suk-Galbi for 1 - Char-broiled Angus short rib beef marinated with spicy house sauce. This was downright delicious - a pile of thin-sliced marinated melt-in-your-mouth beef. My favorite of the entrees. The spicing and everything about this dish was perfect and the quality of the meet superb. You won't typically find something like this in most restaurants - it's well worth the price. 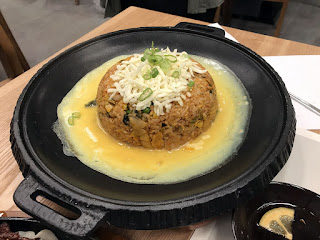 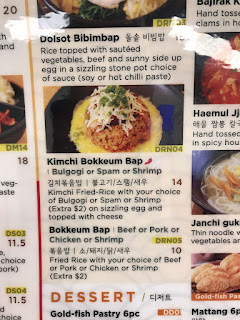 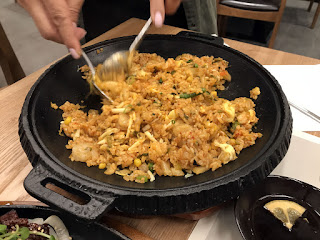 Kimchi Bokkeum Bap with shrimp - Kimchi fried-rice with your choice of bulgogi, spam or shrimp on sizzling egg and topped with cheese. This looked really interesting - it was a bit like the rice-om dish you can find in Japan but without the ketchup. The cheese really adds a different, more omelet-like quality to the dish. Our server hand-mixed it for us at the table. You really don't need the white rice when you have this. 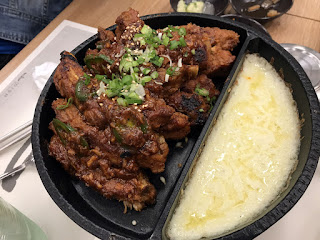 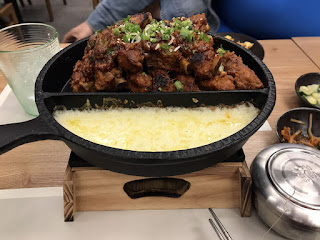 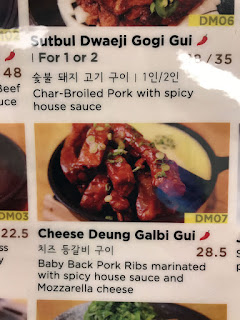 Cheese Deung Galbi Gui - Baby Back Pork Ribs marinated with spicy house sauce and Mozzarella cheese. I loved these - the only complaint was that they were slightly dry. The marinade, coating and topping were really fantastic. I'm not too sure about the cheese - the pan is over a small fire but it wasn't enough to keep the cheese wet for dipping. We broke it into pieces and at the cheese as more of a side item. Overall still exceptional. 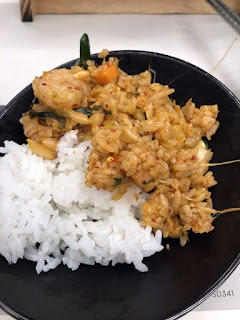 I asked for a bit of gochujang (a fermented spicy paste - think of a hot sauce on steroids) and was given a bit of their homemade stock - quite good and smokey flavored. 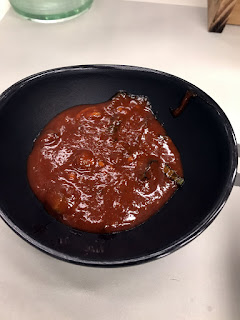 When we were finished (and somehow we ate pretty much everything) we were given complimentary custard-filled, fish-shaped donuts that were napalm-hot - careful with them or you will burn your mouth. Also a small bottle of sweetened yogurt drink. 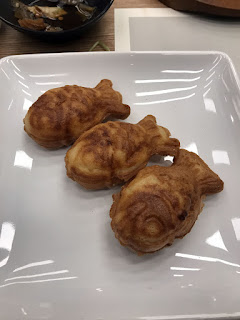 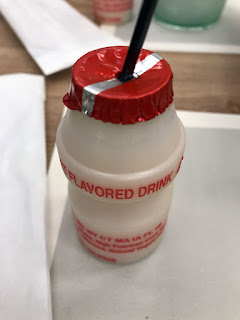 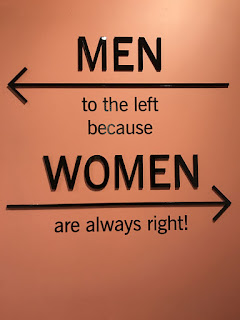 The service was exceptional with plenty of water refills and people asking us how we liked the food, etc. While the prices were higher than the surrounding Korean restaurants (15-20% - more like the pricing you find in Duluth) the quality of everything we had was really exceptional. I hope that doesn't change. I love the other Korean restaurants in the area but for now this is my go-to, it's just that good.