You can find this location of Taziki's Mediterranean Cafe at 5610 Glenridge Dr, Sandy Springs, GA 30342, the strip of restaurants at the foot of Windsor at Glenridge where you'll also find Sushi Nami, Da Vinci's Donuts, Qdoba Mexican Eats, and Blue Moon Pizza. Parking is your basic nightmare with too few spaces for the number of businesses serving food, primarily at lunch but also apparent during busy nights (I'm guessing the focus was on Windsor residents, not realizing the need for convenient food in an area starving for quick eats). 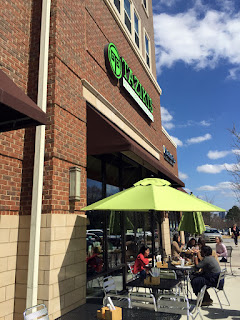 I've eaten at other locations of Taziki's and have already reviewed the Alpharetta location - this location on Glenridge is much the same. A fast casual restaurant focusing on Mediterranean cuisine - one of my favorites - where many of the ingredients are produced fresh and you pretty much see the origins of what you're eating. As with the other location the food here is surprisingly good for a chain. There's quite a bit of seating inside as well as a few umbrella-ed tables out front. Service is reasonably fast and they have a few craft beers on the menu. They also have several salad and vegetarian offerings. 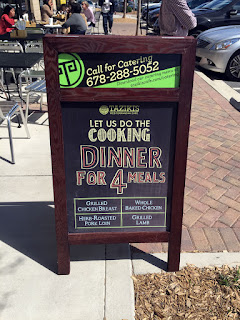 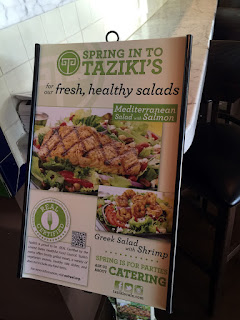 The interior has a long counter where you can view the food being prepared and examine the menu. When you get to the end someone helps you order and provides you with a number- make sure you order everything you want as when it's busy you don't want to have to get back in the long line (it will fool you - I typically arrive early to beat the rush and within 30 minutes the line can stretch to the door).

On  this day we ordered a mix that included:

*Homemade Greek Lemon Chicken Soup - your basic Greek soup that you usually find with Orzo - this version had some fresh cilantro added which seemed a bit odd to me - it threw the flavors off a bit from what I'm used to but still tasted good. If it was parsley it fooled me as it had the typical cilantro flavor. 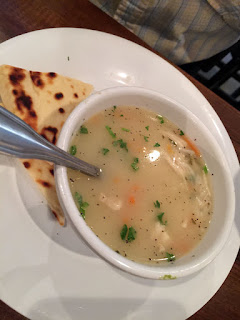 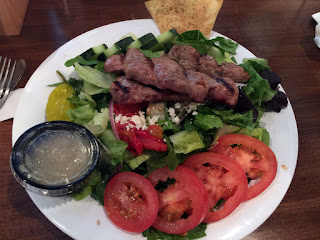 Grilled Chicken Gyro - Taziki sauce, tomatoes, mixed lettuce, and grilled onions - served with potato chips and a side of roasted potatoes. The sandwich was good but I though the potatoes a bit under cooked (same for all I tried). 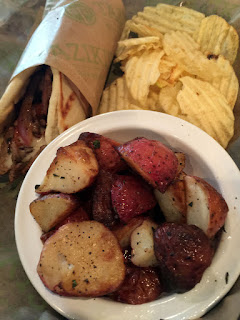 Grilled Beef Tenderloin Gyro -Taziki sauce, tomatoes, mixed lettuce, and grilled onions- served with chips and ketchup (yes I have a friend/coworker who put ketchup on the gyro and then told me he didn't like it). This would not have been my first choice but the bit of beef I tried tasted fine. 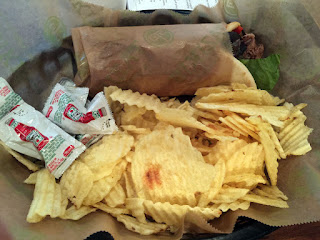 Grilled Veggie Gyro - Pesto aioli, tomatoes, zucchini, squash, grilled red peppers, grilled onion, and feta. I did not try this but Sid said it was good and I believe him. Served with chips and roasted potatoes. 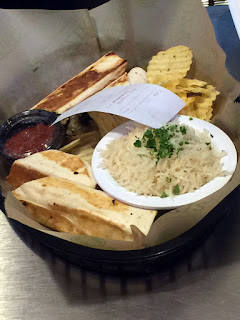 In all the food is good and consistent here, just like my previous experience and both the person taking the orders and the guy delivering the food were nice and responsive. The restaurant is fairly new and still clean and they serve Monday Night Brewing. What's not to like?