You can find Fox Bros. Bar-B-Q at 1238 Dekalb Ave NE Atlanta, GA 30307, right on the border of Little Five Points and Candler Park, at the Dekalb Ave overpass across Moreland. This is a stand-alone business with limited parking, fortunately there's a side-street where you can park as long as you're not blocking one of the resident's driveways - you'll see some cones where residents would prefer that you not park so please respect those and you'll be fine (also beware the couple of blank spots near fire hydrants - you have been warned). 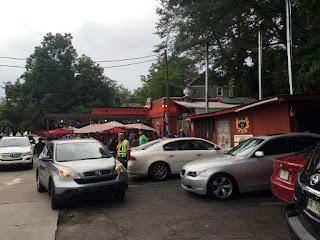 Fox Bros as a company has become an Atlanta institution serving ups some fantastic BBQ, originally at Smith's Olde Bar before coming to the current location. I don't recall what was here before - seems like it wasn't a restaurant when I lived in L5P but at some point I recall eating some vegetarian food at the previous joint (Fried Green Tomatoes comes to mind?). I always thought it a bit ironic that it became the home of smoked meats. 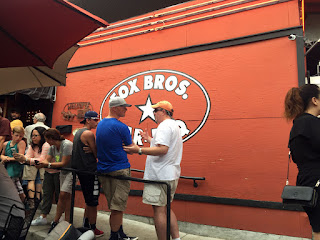 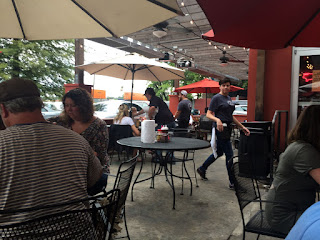 This was my first time at Fox Bros actually sitting down and eating as every previous time the wait has been an hour so my party has always gone elsewhere. I have ordered from the counter in the past and my company used to frequently cater from these guys but less so now (most recently a couple of Fridays ago) so I'm very familiar with the food - the quality of the rub and rind here indeed supports the multiple rewards they're received - they usually find themselves in the Top 10 lists of BBQ places in Atlanta and sometimes Georgia. Thinking about the food makes my mouth water, even as I'm writing this. 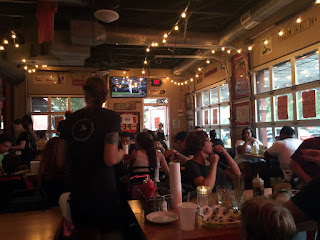 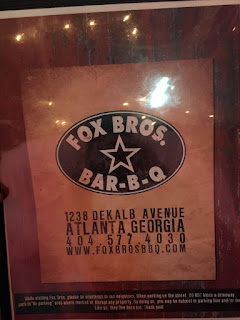 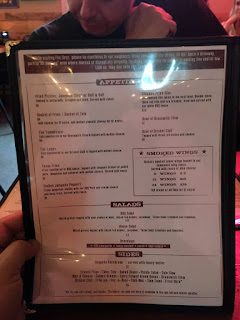 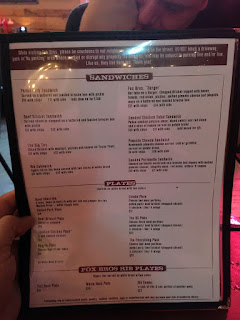 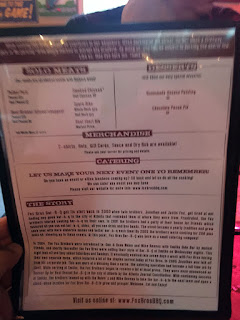 Yesterday started as a regular get-together as I was with a friend and suggested that we have a late lunch here before hitting Arches Brewing for a talk on local beer history (awesome new brewery in Hapeville, by the way, that you need to try). We came by around 1:30 PM and were told there was an hour wait - as neither of us had breakfasted, we decided to make our way to Krog Street Market then head to the brewery when they opened at 4:30. We were joined by one other and around 6:00 thought we would try Fox Bros again. I guess I had so oversold Fox Bros that they really, really wanted to experience it, even after I suggested we go to the exceptional Pit Boss (also close by the brewery) - I think we got to Fox about 6:30 and figured that we could wait out the 1.5 hour wait-time for a table (and believe me, I never wait more than 30 minutes but my friends really wanted this Q, especially after standing in the smoke-filled air). We ordered a round of beers and waited outside.

When we came earlier in the day it was raining and so crowded that the hostess suggested we could wait on the patio under the umbrellas - since there was a small table unoccupied we set up our wait there and had a beer. By then the buzz from the brewery was pretty much gone - we were just conversing - I asked the server if we could order and were told very politely that no, we had to wait to be seated. No big deal but I had to try, right? After about an hour we were asked to vacate the table - a bit weird as we could have eaten and been gone as we were waiting to be seated but no sweat. We got a second beer and stood near the railing. We were half-way though the second beer when we got the very efficient text notifying us that the table was ready. We walked to the corner and had just been seated when things get interesting.

The manager? came by to let us know that we were cut-off from any more alcohol - that there was some report of an incident and that it was OK for us to eat but no more beer. We looked at each other bewildered and starting asking about what we did? She left for a bit then returned to say that my friend Arvin had threatened one of the servers with his beer glass - what? We told her that there must be some mistake - we were all there and it just didn't happen, but she didn't back down. It was a bit of a "eat and GTFO" moment. So we ordered the bone-on beef rib, the pulled pork, a rack of pork ribs with a side of slaw and Texas toast. Food was awesome as usual but as I sat there I started getting a stomach ache - not because of the food but because I couldn't reconcile the attitude we were receiving from this place of business. 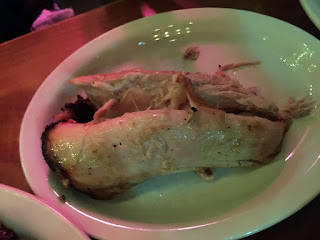 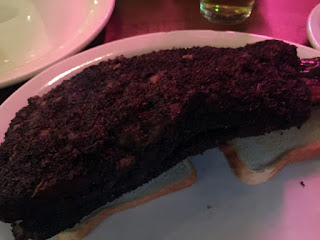 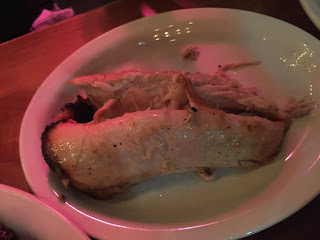 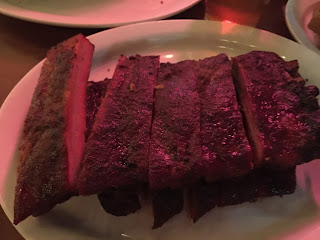 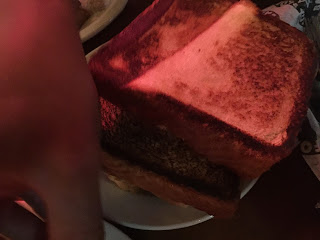 As many of you know, I worked in the industry as a chef for 10 years, retiring after a stint at Indigo Coastal Grill near this very restaurant - I used to bike to work from my house on North Highland and know this neighborhood. Having worked both front and back of the house, I have a keen understanding of the restaurant business and the need for restaurants to protect their staff - I totally get that. But this was just weird. The three of us weren't being obnoxious, weren't loaded or exhibiting anything that would make the business perceive us as being threatening, just a bald Asian, an Indian guy and a Russian who all worked together in the past, having some light conversation and waiting/starving for food. It's my opinion that whoever pointed us out was just mistaken - either something we did was misconstrued (and I was there so I'm not sure what that was) or, more likely someone just mistook our table for another group. The fact that we were so bewildered should have provided some clue to the "manager" that we weren't the right group. We basically ate our food and left.

I can understand if something happened - heck if we were drunk and belligerent I would expect to be thrown out as the actions of one can upset the whole restaurant dynamic. If something had indeed happened, why wasn't the cop stationed in the parking lot leading us off premises? Instead we get an "eat and GTFO"? And herein lies the rub. This whole incident has my gut twisted up as I do love the food here, but the night just rings with a level of arrogance that I don't find very palatable. In fact I don't think I can every come back as the events have ruined Fox Bros for me. To think that my friends were so enthralled by my description that we waited for 1.5 hours to sit when we could have gone to innumerable restaurants elsewhere in Atlanta, only to be treated with suspicion and disdain, speaks of a restaurant where good service has been replaced by ego and contempt for those customers who buy their wares. Perhaps I'm being sensitive? I don't know but right now I'm done with Fox Bros. 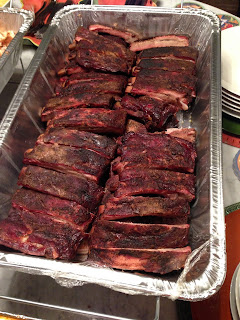 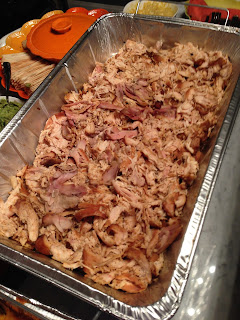 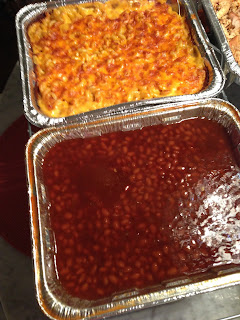 (also posted in a shorter form to Yelp)