You can find Naan 'N Curry at 3083 Breckinridge Blvd, Duluth, GA 30096 near (behind?) Gwinnett Place Mall at the corner of Breckinridge Blvd and Old Norcross Rd. There are several restaurants in this small strip mall - Naan 'N Curry occupies one end. Parking is int he lot out front and there appears to be a lot of activity so you may have to walk a bit. 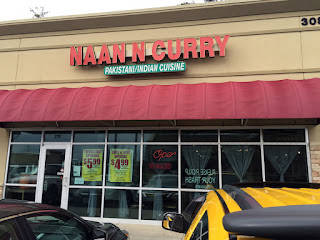 I finally had a chance to try Naan 'N Curry for a late lunch one Saturday afternoon - this was upon recommendation of one of my Indian friends - I was in the area and decided to try the buffet. Naan 'N Curry is a Pakistani-style restaurant and as such the flavors  are much more in the style of west India - spicy but also a bit more "soupy" in consistency. There were two tables occupied and a couple of more visitors came in while I was seated - also a few take-out orders were either made-up by people at the buffet or picked up, presumably from a call. 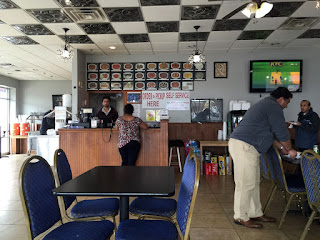 When you walk in you'll see a plain and clean dining room with a counter that extends from the back wall - above are some menu options and a guy manning the register. If you order food from the menu I believe it's delivered through a small window behind the counter - at least that's where much of the take-out was being passed to the guy in front. The buffet is to the left with a couple of hot-line tables and a cold-line table for pickles, sauces and the like. One pan had a few naan wedges with the others mostly containing soupy meat dishes. The smell of curry was quite pleasant. Piles of styrofoam plates, bowls and cups were nearby as well as plastic utensils. This latter reminded me quite a bit of eating in the mall food courts in India - actually the inside of the place also felt similar to those experiences to me.

I gathered up a few items for a plate and asked for some fresh bread, as the few wedges in the hotel pan were fairly hammered. After a few minutes someone dumped a pan back into the pan so I left my table to get some and was surprised as it didn't seem to be fresh bread - more like they had extra made up for the lunch rush and decided to use it up. First time I've seen that. While scooping up a few items it was apparent that quite a bit of ghee or some other oil was very prevalent in the food - lots of fat floating on top of all the pans. 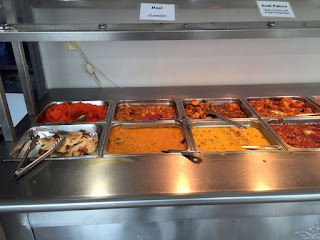 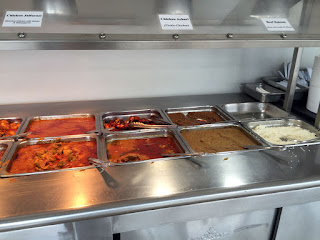 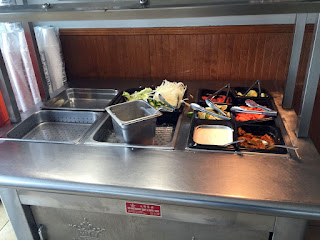 Now to digress a bit, I've tried about a dozen Pakistani style restaurants and there seems to be a common theme - perhaps it's just something inherent in this style of cooking but the extra oiliness is definitely a turn-off for me. Maybe I'm a bit too American? It just turns into grease in my mouth and belly and gives me a stomach ache. I was careful to get the "cleanest" portions as possible but by doing so I ended up missing out on much of the gravy which is where much of the flavor is contained. The only Pakastani restaurant where I've eaten that I really enjoyed was Kabab Hut in Lilburn (probably due to the all-BBQ plate I ordered) and Zyka in Decatur (but this latter was much closer to what you would find in an Indian restaurant to me). I hate to generalize like this but there it is.

So the plate of food I built - I ate it but did not go for seconds. The meats, as I said were a bit under-spiced since I passed on the oily gravy and the one mixed veggie dish was a bit marginal to me in flavor - even the korma seemed light on the spice and the daal a bit light on cumin. OK so maybe I'm a bit picky - I'm sure others will find the food just fine. On this day, with what was offered on the buffet I started getting a stomach ache when I left the restaurant. To me it makes it below average but I'll round up to 3/5 stars. 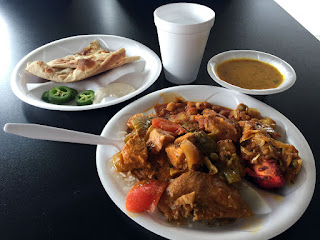 The service here is pretty much non-existent since you tell the guy at the counter and with the buffet it's self-serve, so I can't comment too much on this. I did feel like the guy didn't like me taking photos (I've experienced this before and had someone tell me photos weren't allowed - this was at Ashiana in Global Mall) so I tried not to be too obvious or obnoxious about it.