You can find Grub Burger Bar at 2470 Briarcliff Rd NE, Atlanta, GA 30329 at the venerable Loehmann's Plaza, now called Brighten Park I believe. This is the first major shopping center on the right when you get off I85 at North Druid Hills traveling east. It's also home to the very good Fortune Cookie Chinese restaurant. Grub is a free-standing building towards the front of the lot facing Briarcliff, with parking to either side or in back (there's plenty). I think the building used to be Lettuce Souprise you previously. 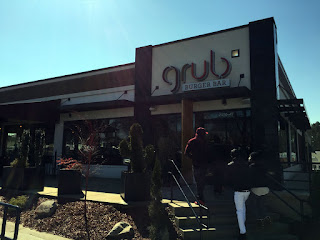 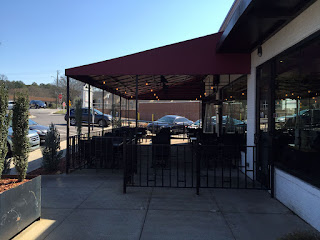 I've been wanting to try Grub for a while and had the opportunity to meet up with a few old friends. We've since decided to meet about once a month at various places between us all and the Briarcliff-to-Brookhaven area seems to be a good compromise as a half-way point between our various work locations. The exterior of Grub features a glass facade with short awnings and a largish covered patio. The interior is industrial with polished concrete floors, long hardwood counter-tops, metal chairs and vertical-slat accents. The center is made up of a bar where you can order beer and boozy shakes. When you walk in the counter is to the right and back - as with other fast casual restaurants you make your selections while in line and relate them to someone behind the register. The food is delivered to your table when it comes out of the kitchen. 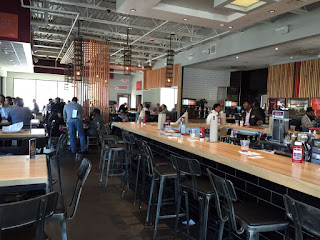 The restaurant had a line but wasn't terribly busy - this was a Thursday around 11:45, just before the lunch crowd. The menu is broken up into different areas, but for the most part it's burgers/sides on the front and drinks on the back. The burger menu includes options like ground chicken, chickpea and salmon for those that don't do beef. There are some interesting sides like tabbouleh that you don't typically see on burger menus, also several salad options including a Pesto Turkey Cobb that looked interesting. My focus today though was on the burgers. The menu flip-side features handspun, handcrafted shakes, Grub'ritas, Signature Cocktails, Draught Beer, Bottled Beer, Wine and Ice Cold Drinks. 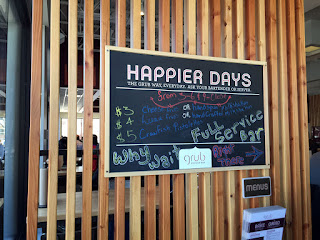 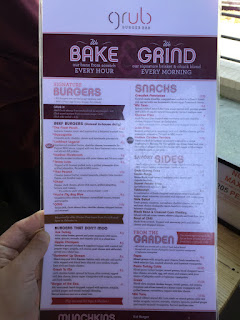 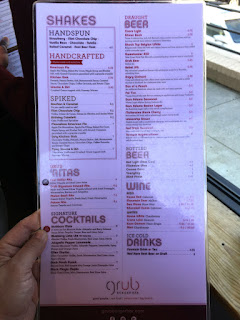 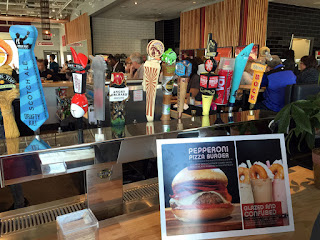 I ordered the Ghost Burger - Pepper Jack cheese, ghost chili sauce, grilled jalapenos, lettuce and tomato - I also opted with it "Inferno Style with ice cream chaser" for the extra buck. As a side I got the sweet potato fries which were quite good. The burger was good but not as hot as you would think - it had quite a bit of flavor but I think  it was a bit too saucy, but maybe that's what the Inferno Style does to it? I'm not sure. The green chilies were hot but not out-of-this-world hot. Overall I thought the burger very good. I also ordered a Salted Caramel shake. 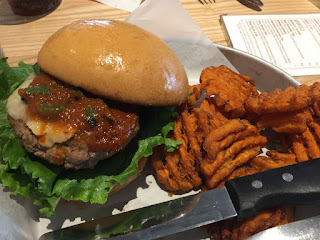 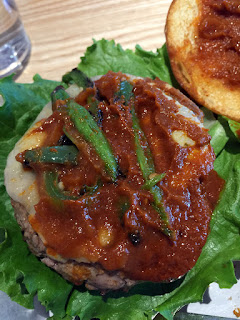 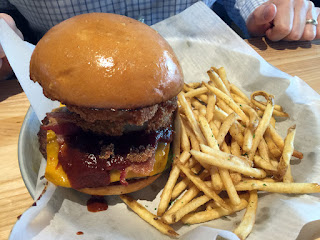 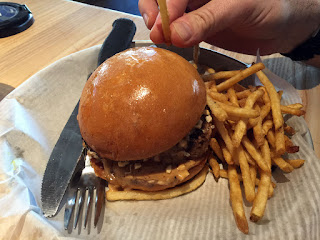 The food in general was quite tasty - it also was delivered without the both my ice cream chaser or the shake. We waited and waited, flagging down servers and food runners about the missing ice cream and food and started eating - actually finishing all our burgers. The chaser finally showed up while we finished up the fries and I spied the shake sitting at the bar. We finished everything before someone brought a very melted and not-very-good shake to the table. Afterwards a manager came by and offered me a card that provided a free side item - not much of a consolation - I threw it away. I worked in restaurants, both front and back of the house for over 10 years so I understand that things get messed up so no sweat. Having to choke down a mostly -melted shake because everyone wanted to leave wasn't the end of the world. However, the response to the screwed-up experience will keep me from returning to Grub. It also knocks a 4/5 star rating down to 3 stars for me. Too bad as I like the concept, but I'll now pass and go to Grindhouse instead. 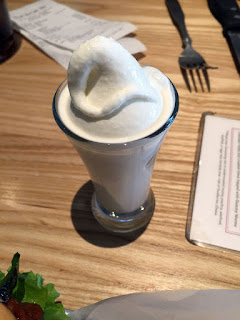 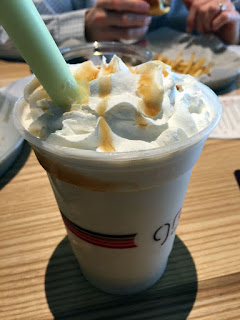 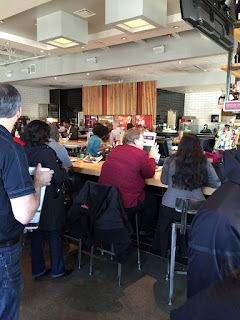 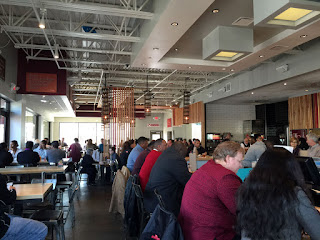