Eventide Brewing is located at 1015 Grant St Atlanta GA 30315 in Grant Park. It occupies a small industrial building with fenced yard about four blocks from Grant Park proper but it's a fairly easy walk from Cyclorama (add a couple of blocks to get to the street grid) if you time things right. 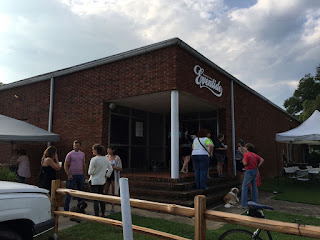 I met a group of friends to checkout Eventide one weekend afternoon - at the time this was one of the newer ITP Craft Breweries but since then several others have popped up - we truly live in a golden age of beer! In any case this very pet friendly brewery was having a special tasting where a portion of the fees went towards a local shelter, so there were locals with pets all over the yard. Quite fun if you're into pets and in particular dogs - lots of puppies running around enjoying the fine weather. 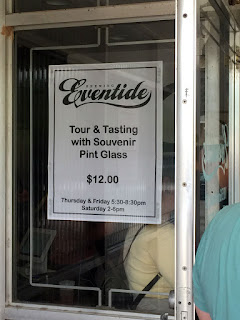 The brewery itself is new enough that the selection was quite manageable - I was very interested in tasting the Kolsch style ale which I had heard quite a bit about. For the $12 fee I received a plastic cup (it's normally a pint glass but today plastic due to the pet-thing). I managed to receive half-pours and try all six of the current offerings. Of them, the Kolsch was the most unusual - this light-bodied ale is crisp and very effervescent - it's a very clean ale if a bit light for my tastes. I liked the Revivale Belgian Golden Ale the best - it had an alcohol kick (at 8.5% it should!) that gave me a bit of a rush and it's noticeable on the nose. I also sampled the Dry Hopped Pale Ale, the Dry Irish Nitro Stout and the Highlander Strong Scotch Ale but honestly, each of those were a bit disappointing to me. They aren't bad, but I think I had higher expectations that what I experienced. 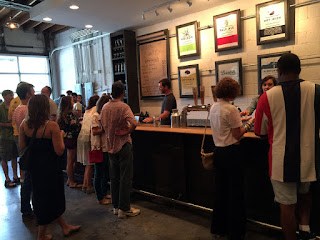 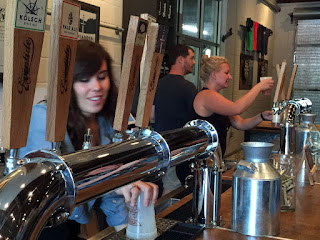 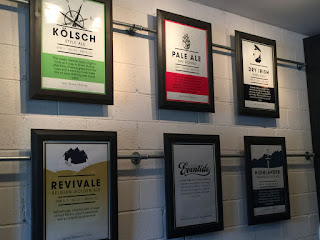 While the brewery was interesting and I'm glad I got to sample the current offerings, in general the beer here doesn't match up to the maturity of  Monday Night Brewing which I've been using as a yardstick to the current crop of craft brewers. I do have high hopes for Eventide and I'm sure they'll find a niche - the Kolsch is certainly a good step in the right direction. As long as they don't venture into the pilsner/sour ranges I'll still try anything new they come up with. I do love all the variety. 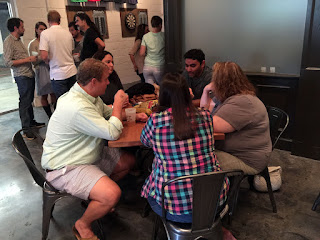 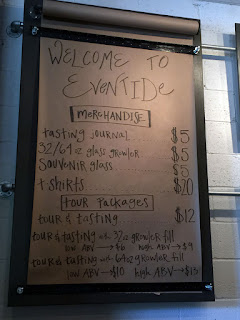 Service here was quite good and while the lines at times were rather long, they moved quickly. I did not take the tour as the timing wasn't right. We went from here to Old Fifth Ward to take on the Church and grab a bite (we ended up at the Sound Table which was downright righteous!).