You can find Sugarfire Smoke House at 150 Elm Point Industrial Dr, St Charles, MO 63301 on the corner of Elm St and Elm Point Ind Dr, not too far from highway 370 (exit off Elm). This is an interesting Mid-Century Modern building with an up-swept roof- I'm not sure what it was originally built for, perhaps a diner or filling station? In any case, the building does the BBQ justice by providing a unique setting and an interesting ceiling for an airbrushed mural. 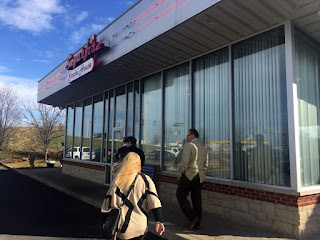 You get in line and order at the counter (funny how this is now called "fast casual" when most BBQ restaurants have been serving this way since the beginning), first with your choice of meat(s) - many of the items are portioned out as you work through the line so by the time you get to the end everything is on a tray - literally. They forego the normal plates and serve the meats on brown butcher paper with the sides in small paper-fry baskets. There are several veggie options that don't seem to be mentioned on the menu boards - look it over and grab what grabs you! You can pick up from a few different pickles and there's plenty of sauces to try on the tables, along with rolls of paper towels, which you will need. 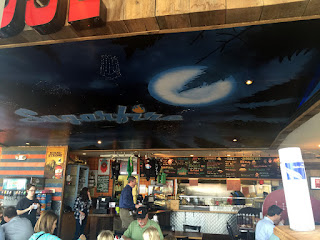 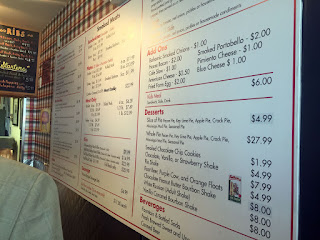 Once you find a spot, pick up anything that you missed (a toothpick would be a good idea) and head to the drink station - I wasn't familiar with anything on the fountain and was told that they were all local brands from nearby Wisconsin - seems it all had sugar too so I choose the unsweet tea mixed with a splash of sweet tea - it tasted fresh-brewed and quite good to this Georgia boy. 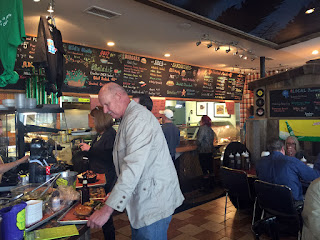 This is a classic Southern style BBQ joint with lots of rind and smoky flavor throughout the great variety of meats. I didn't get to sample everything, only having a short time for lunch, but I did manage to order a combination that included some delicious pork ribs (St Louis style, appropriately) and some super moist beef brisket. My order included 4 bones, about 4-5 ounces of brisket, a side of coleslaw and a side of succotash (fresh saute of green beans, yellow and zucchini squashes). 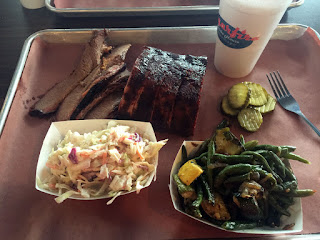 The service was quite good with the people behind the counter quite accommodating - seems they're used to visitors that might not know what to order. They were also quite proficient in getting the meats on the paper so you can move to the sides - some of the sides take a bit longer, also some items may need to be cooked up so you might want to ask if you're in a hurry. Next time I'll try some of the other items but for today, what I had was quite filling. The sandwich portions appeared to be ginormous. 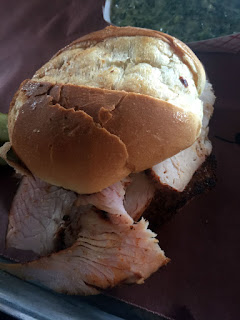 Overall, this rates as some of the better BBQ I've had and if you know me, you'll know I've had more than my fair share. The brisket rivals some of the best I've had in Texas and the ribs were quite good. I was told that this was one of the better local BBQ and I believe it lives up to that claim. I'll be back.