You can find Il Bel Lago at 11631 Olive Blvd, St Louis, MO 63141 in a suburb called Creve Coeur almost due West of St Louis as the crow flies. The restaurant is in a protruding part of a shopping center almost hidden by lit trees (not sure if it's due to the holidays or if they're always lit). Entrance is to the right as you go around the corner and parking is in the lot out front. The interior is upscale with an elegance usually reserved for fine dining, but the atmosphere had a younger, frenetic feel that I found quite refreshing. Apparently the restaurant's original name was Bellagio but there was some dispute with the owner's of the hotel that ended in a name change - lucky for me the food retained it's very good quality. 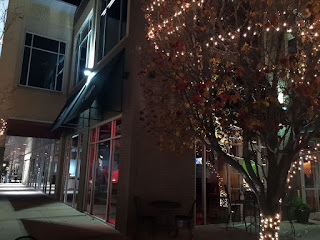 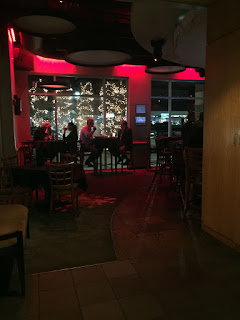 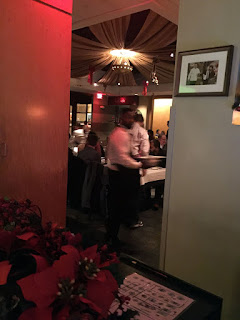 The menu has many very classically inspired Italian dishes to tantalize the diner - I saw many items I would like to try and hope to at some point. 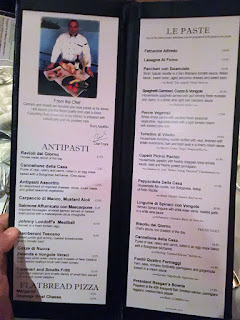 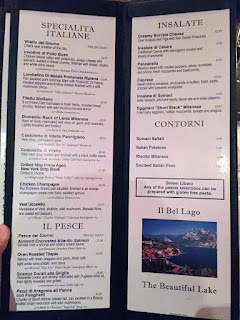 This is perhaps the best meal I've had throughout several visits to St Louis on business the last few years. Sue T (a friend and coworker) and  her husband Carl graciously took me to Il Bel Lago and introduced me to the chef, Frank Giovanni. Afterwards we were sent a nice "combo" style appetizer that featured a delicious lobster ravioli and a  veal tortellini with shitake mushrooms and peas. The flavors were both unusual and offered great contrast to each other. 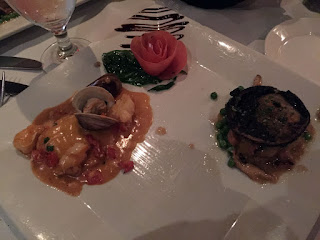 As I always do, I tried some of the local craft brews rather than going with wine - in this case the Schlafly's Pale Ale won the lottery as my initial try - honestly I didn't care for it much, preferring the hoppy bitterness of an IPA - this was a bit too lagerish to me with a bit of an oily mouth-feel that didn't work for me. I also ordered a Caesar salad that had an anchovy nicely sandwiched in parmesan crustini. For my second brew I switched to a standby Ranger IPA. 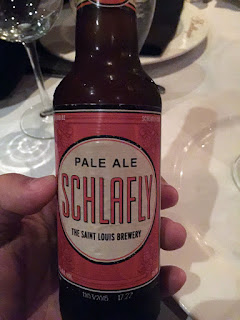 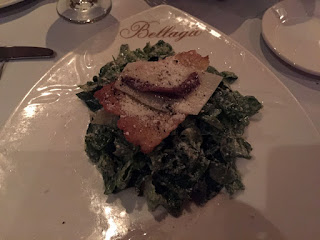 For dinner I ordered the Spaghetti Gamberi, Cozze & Vongole - homemade spaghetti (almost an angel hair) with gulf shrimp, fresh mussels and clams in a white wine light san marzano sauce. This was quite delicious with a good amount of fresh garlic that provided little bursts of flavors as you eat the pasta and sauce. Also, the shrimp were quite large and filling - absolutely love this dish. 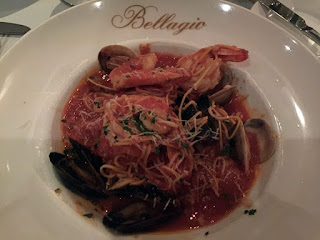 We forwent the dessert but ended up with these little chocolate and creme (with some type of booze) parfaits that were quite good. Not on the menu, I think they called them chocolate cows or something similar?

Service at Il Bel Lago is quite exceptional - our server was knowledgeable, courteous and quick to deliver. We couldn't have asked for or expected better. Thank you Sue and Carl for introducing me to this place - I hope to be back!