You can find this location of Takorea at 4474 Chamblee Dunwoody Rd, Atlanta, GA 30338 in front of the Georgetown Shopping Center in the old Guthrie's location. While the former Guthrie's was a good option for fried chicken, with so many other options nearby it had a hard time competing. Nice to find a Takorea now at the same location, this time with additional outside seating via a covered patio. Limited parking to the front, but plenty in the Georgetown lot. 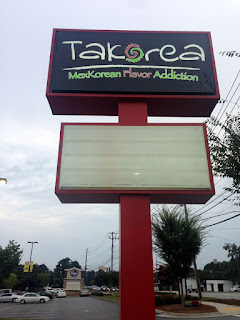 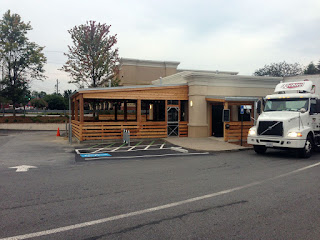 I first became aware of the Takorea in midtown and ate there one evening with friends during trivia night. I later sampled the parent location, Hankook Taqueria on Collier Rd in West Atlanta. This location has the same awesome food but with the same fast-casual, order-at-the-counter vibe. During lunch the line often extends out the door. It's easier to spot the ready marquee near Chamblee Dunwoody Rd - just know that the restaurant is closest to the road and is stand-alone, unlike those businesses that are incorporated into the main shopping center row anchored by Kroger (so it's not in the same building at Starbucks, Goldberg's or Farmburger - all also excellent options, by the way). 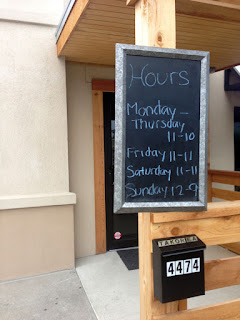 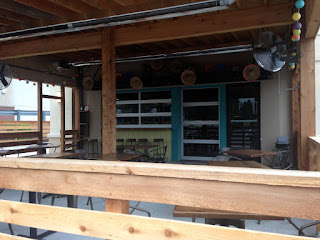 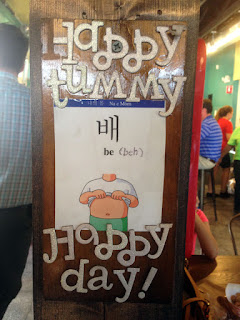 I've been coming to this Takorea since it opened mid-2014 and somehow have selfishly visited over a dozen times without more than a passing review. This shopping center is conveniently located between my work (near 400) and my home near spaghetti junction, so it's super, super convenient for a quick bite or as a place to camp while traffic works itself out. They have a few decent local beers on the menu so I can sit on the patio and watch the messy roads while sipping a brew and maybe a taco or two. 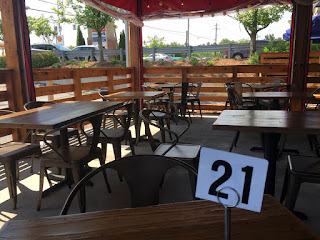 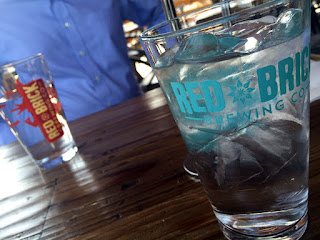 If you haven't tried the Koran taco yet it's quite a treat. This involves the spicy and sweet flavors usually reserved for grilled Korean food, inside of a soft tortilla or wrapped in a burrito. The flavors are super complimentary and just lend themselves well to one-another - and you also get the convenience of wrapped food. I like to bring people who haven't had Korean and might have some fear of the cuisine here to Takorea and have been very successful in converting them to Korean cuisine. 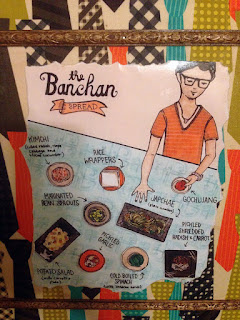 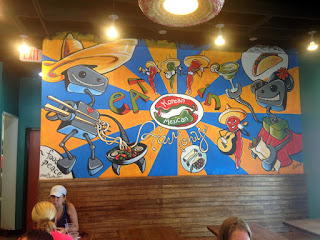 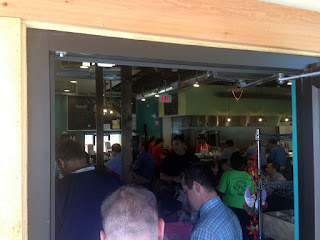 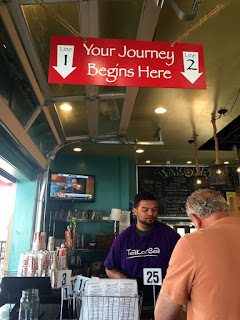 Speaking of bringing people here, this is a great lunch hangout but I would suggest that you either come earlier or later as I've already written, the line can go out the door. The interior is part Mex-brightness and part Asian with robot-looking guys prancing around the room - quite fanciful-whimsical. The menu is broken down into three main categories, Snacks, Tacos and Burritos. You order from a simple paper menu at the counter, grab your drink and sit with a numbered stand. Someone brings you your food and then it's a race to not woof everything down too fast and actually enjoy your food. 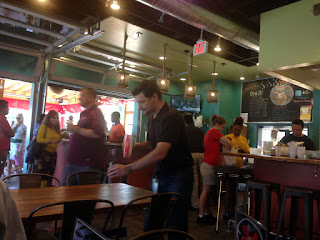 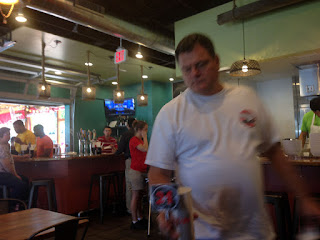 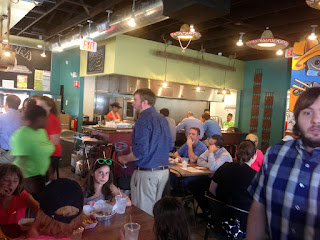 Here are some highlights of items I've sampled:

Sesame Frieds - Tossed in sesame oil and red pepper flakes. These are delicious but some of my friends, who I later found out did not like sesame oil and which is a prevalent flavor in Korean cooking, did not like them. Otherwise they are crisp, slightly tangy with the nutty flavor profile. 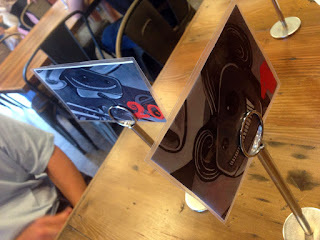 Quesadilla - bulgogi (Korean marinated beef), roasted onions and jack cheese. Move over carne asada, this version is sweet-savory and an excellent introduction food. Ask for a side of hot sauce (GQ Dip made with Gochujang). 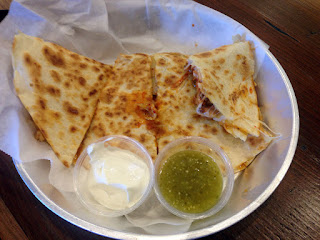 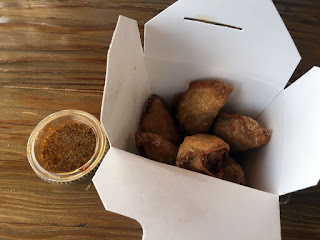 Gogi-nachos - chips and jack cheese topped with bulgogi - I liked these but the portion really should be doubled. Make sure you get extra jalapenos. 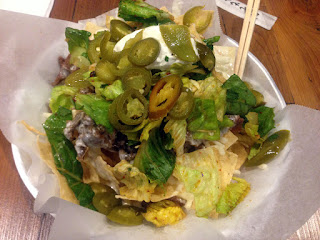 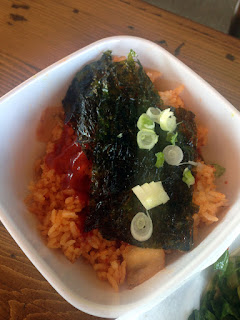 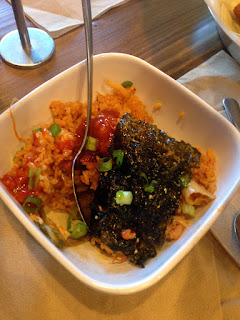 Bibim-bop - beef, gevetables, fried egg w/pepper sauce on rice. I know I'm supposed to like this dish but it's never been one of my favorites (here or elsewhere - my mom didn't make it). I think it's the cold/hot relationship that doesn't work for me. 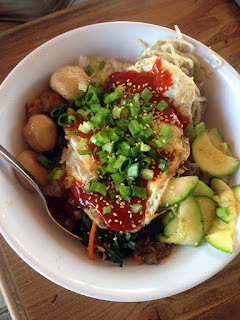 Of the Tacos, I've tried the Chicken (both fried and BBQ), Beef, Pork, Fish and Shrimp. I like getting the three taco special with one of each flavor. 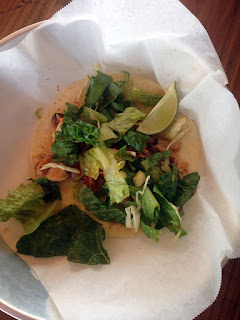 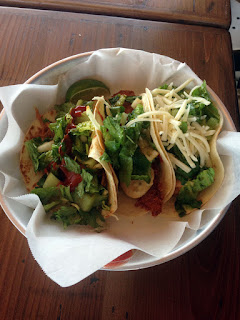 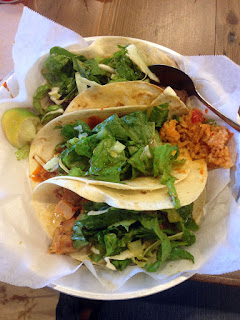 Burritos - I've had the Chicken, Beef and Pork, all delicious but I do wish they were about 25% bigger. 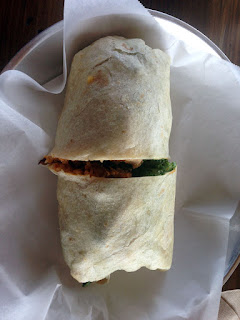 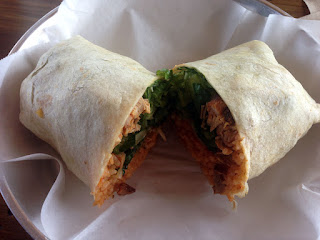 Entree Salad - I prefer the chicken over the beef, but I generally like that combination with lettuce. Ask for a side of the hot sauce. 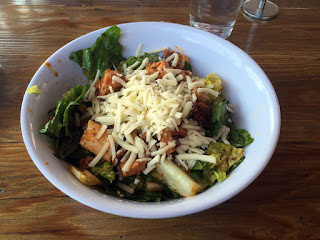 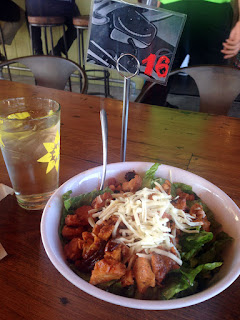 In all, I thing you'll enjoy this place - kick back with a local craft, a handful of tacos and a side of the fried rice and you'll leave with a smile and a warm belly. Enjoy!