You can find this location of Dickey's Barbecue Pit at 6631 Roswell Rd NE Ste J, Sandy Springs, GA 30328 in Abernathy Square Publix Shopping Center right at the intersection of Abernathy Rd and Roswell Rd, North of the perimeter. This is a very busy shopping center with several other food options including Ippolito's Italian, Mirage Persian, Bawarchi Biryani Pointe, and the Publix anchor store. Parking is very busy so you may have to walk a bit from your space. Access to and exit from the lot can be a bit difficult depending on your direction of travel so be careful. 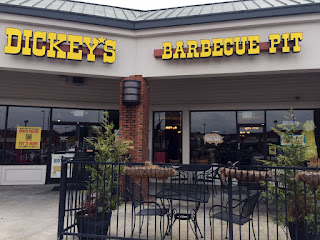 Dickey's is a national chain with several locations across Atlanta. I'm not sure how long this location has occupied this space but I don't believe it's been too long as I'm in the area often. There's some exterior seating but I think of it more as overflow rather than a location to enjoy your lunch outdoors - the view is of a parking lot. 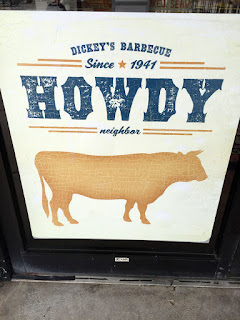 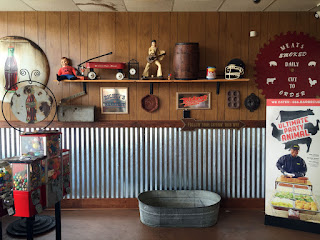 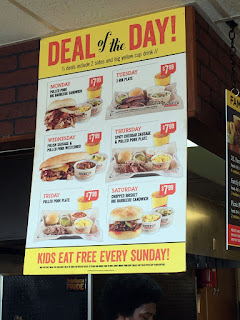 Dickey's interior is no-nonsense with a scattering of tables and typical western-style BBQ-joint decor - not really a date destination (at least with anyone you care about), it's much more of a lunch-line type place. At Dickey's you order at the counter from a menu posted above the counter. Depending on what you ordered you may have it in hand before paying at the register before seating, otherwise you may have to pick it up post payment. The line can become quite long take my advice and go elsewhere if it's extends to the entry. 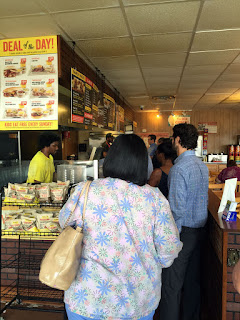 They do take credit cards (and really these days, who doesn't? but then again I'm sometimes surprised when businesses don't). The prices seem to be about average for BBQ but slightly higher that what many people spend for lunch. Drinks, napkins, etc are at the end of the line offering up tea, water and sodas. Depending on the side the drinks are served in plastic Dickey's yellow cups which you can keep to use later. 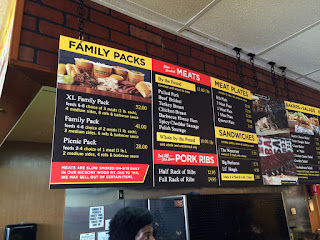 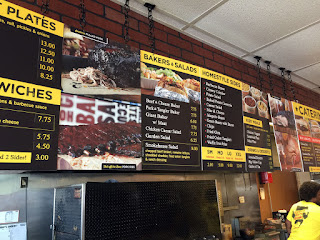 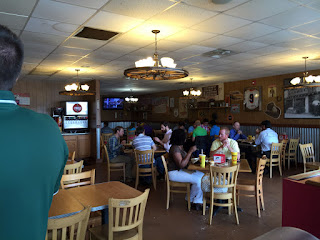 I thought the BBQ above average here with plenty of smokiness and rind. The meats were not dry and the sauce is above average for this type of place. If you're from Atlanta, I'd rate this above the typical Sonny's but below Slope's. Portions seemed slightly small and the overall food appearance a bit sloppy. The chicken, brisket and pork ribs were all very good. I selected the green beans (quite good and meaty) and the Brunswick Stew which I thought above average with a cup for ice water. Food is served on paper in baskets with sides in small paper containers. They also provide free soft-serve ice cream for dessert but I didn't try it. 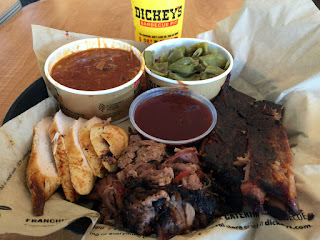 Since you order at the counter, service is relatively non-existent as the intent is to get you your food as quickly as possible and through the line. On the day I visited they guy running the place was short-handed and trying to juggle many things at once. I really felt for him and what he was going through - somehow he remained cheerful and exuded great personality. The only negative was the big mass of unkempt hair and the overall messiness of the food line. Looking at the inserts holding sides was not a pretty thing to behold - many of the sides appearing hammered from being too long in the hot table.

So overall, I liked the food and sauce. I thought the service poor but that may have been due to the lack of staff (and the guy behind the counter apologized) so I'm neutral there. I was a bit disappointed in the overall appearance behind the counter - maybe I'm being picky buy I know many who would walk out on seeing what I saw, but once again it may have been due to the location being shore on staff.