You can find Breakers' Korean BBQ & Grill at 3505 Gwinnett Pl Dr NW, Duluth, GA 30096 near Gwinnett Place Mall. The restaurant is in the middle of a strip of businesses with the Breakers logo prominently displayed. Parking is in the lot out-front. The night we visited it was busy but we still managed to find a seat without a wait. 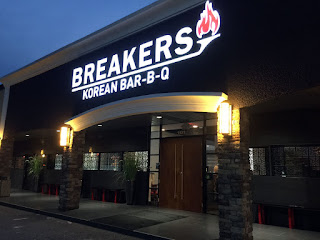 I've eaten a dozens of Korean restaurants - some like this one focused on Korean style BBQ (gogigui) while others focus on tofu soup (soondubu jjigae) or inverted wok (ssot-dduk-kung) and each has its own merits. I've had a very difficult time finding just the right Korean BBQ place - I'll find a restaurant I really like and before you know it, it's sold, changed, gone out of business and become something else. The other problem with many of the Korean BBQ places in Atlanta is that they are often "all you can eat" and the quality of the ingredients is sub-par (I've gone to some places and been a bit grossed out by the tubs of meat). I'm happy to say that Breakers is now my go-to Korean BBQ for many reasons. 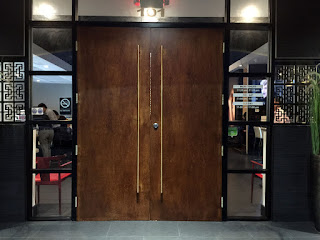 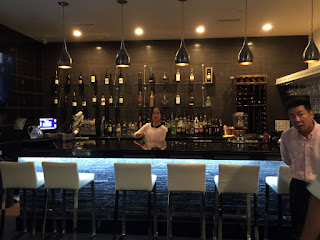 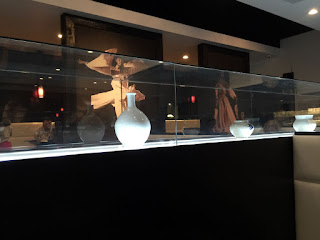 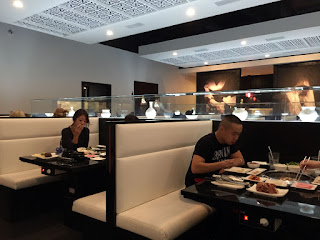 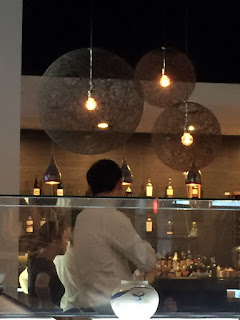 Walking into Breakers you immediately find yourself in a beautiful, upscale environment with modernist fixtures, great textures and clean lines. The double-door entry leads you to the host's counter where you can arrange for your party and sit at the fantastic bar for a cocktail while waiting for your table. The tables are arranged and divided into booths surrounding the grilling surface but with a difference, instead of the noisy vent hoods overhead, Breakers has a downdraft system that's very effective and unobtrusive. You can actually hear what people are saying and you don't have to shout over the volumes of air being sucked out of your booth. 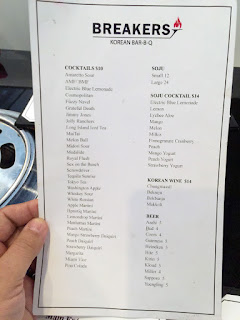 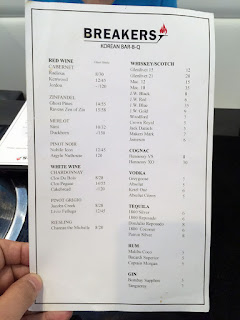 Once seated you'll be provided with two menus, one for food and the other for cocktails or wine. Of particular interest are the soju varieties - if you haven't had soju, it's a bit of a cross between Japanese sake and vodka, clear with a tendency for higher alcohol content than sake. You typically drink this in small shots much like sake as you're eating your meal, as a salute before and a after the meal and, well just about any time you feel like you need the kick. Breakers has several soju cocktails made with fruit juice and/or yogurt. The Electric Blue Lemonade seemed to be quite popular (served in a cobalt blue fluted glass pitcher). I decided to go with a Mai Tai just because. 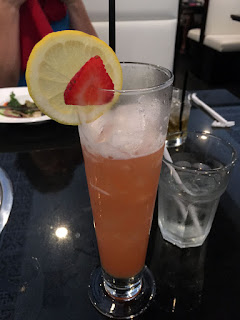 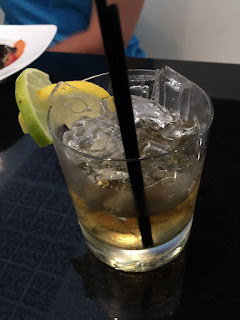 The food menu featured various cuts of marinated beef (bulgogi), beef rib (galbi), pork belly, pork ribs, chicken and tofu steak. Also featured were Chilean sea bass, twin lobster tail, jumbo prawns & scallops and a small selection of soups (naeng-myeon, dwenjiang jjigae and gakbitang). Or if you want to just downright feast, there are two different all you can eat options - after seeing this at the table next to us, we plan an going that route on our next visit. The larger version includes bulgogi, chicken, port ribs, pork belly, beef brisket and squid. The entrees include choice of soup, salad, rice and panchan (side dishes). 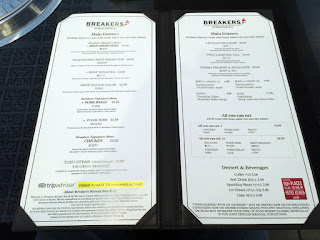 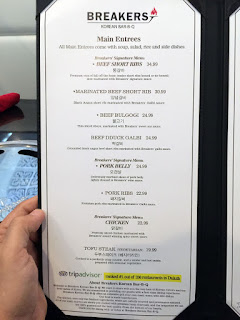 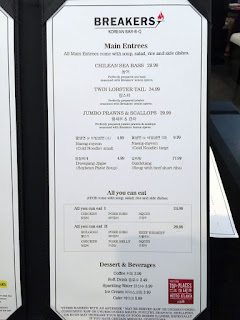 We ordered the Jumbo Prawns & Scallops and the Breakers' Signature Menu Beef Short Rib. Before I go much further I must mention the amazing service we received while at Breakers. Our server was tall, young and quite charming with impeccable English (I believe he said he grew up in John's Creek). He made great recommendations, answered all our questions well and also came by the table frequently. Sounds great so far? It gets better! 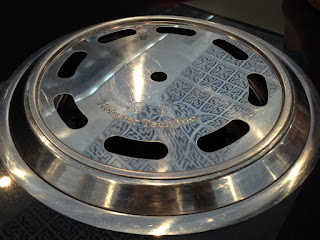 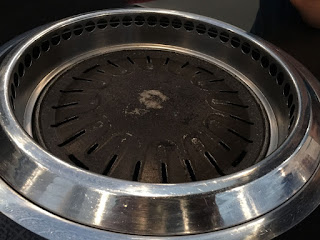 After removing the cover and powering up the grill, we were brought our soups - I ordered a rather delicious pumpkin soup while my wife order the miso shiru and I also had a very good house salad (not something you often see very well done in Asian restaurants). Next came a very nice plate of green leaf lettuce tossed in a sesame dressing that was fantastic, along with our panchan (which included some wraps and thin slicked daikon to hold food like a mini taco). and a plat of marinated/coated shrimp, scallops and fresh onions, peppers and whole garlic. These last items were placed on the grill and allowed to warm up as we munched on the side dishes. The shrimp and scallops were of a decent size and tasted fantastic on the grill with the sides. 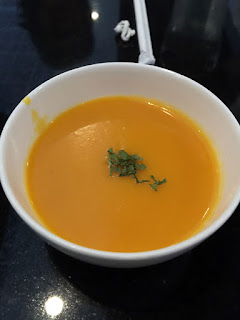 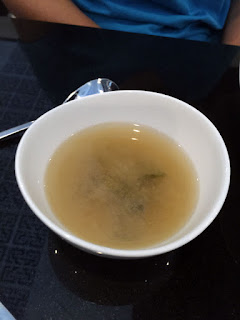 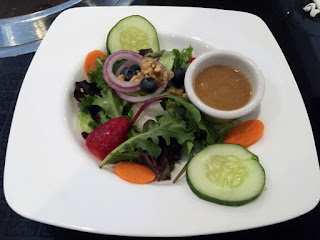 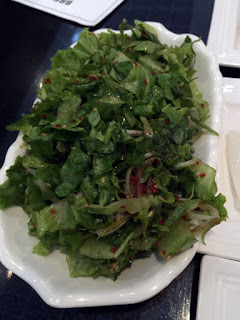 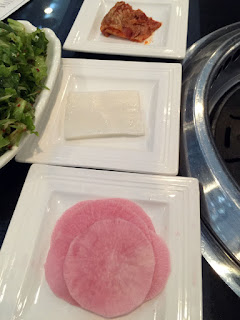 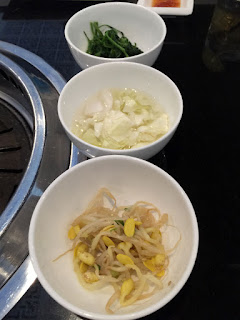 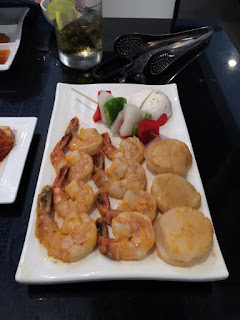 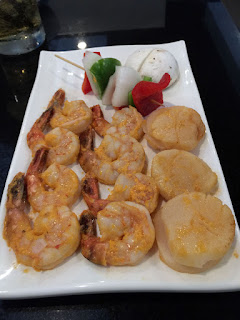 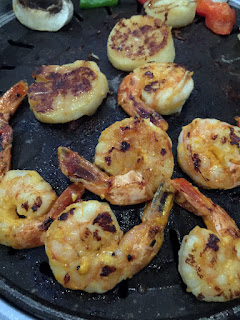 As we finished up, out came the Beef Short Rib - this was served "California Rib" style meaning the steak was still attached to a trio of beef rib-bones and pre-grilled in the back to give it some smokiness, sliced downwards to the bone and served rare. You place the bits on the grill and cook them to your level of doneness (but basically you could eat them rare if that's your bag). This was delicious with super tender strips of beef. I'd recommend this as a treat for any beef fan - if you don't like this there's something wrong with you. This is also the first time I've seen this service technique in Atlanta and I can see it becoming a trend - it's quite impressive. 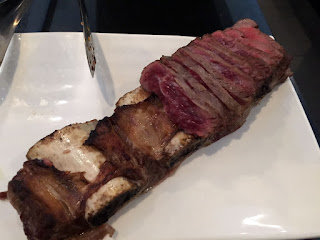 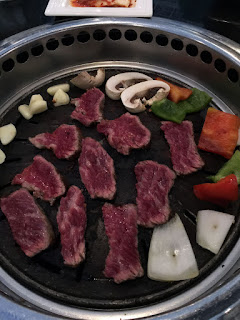 While we were eating we asked about some of the soups and were brought a bubbling crock of the dwenjang jjigae (soybean paste soup) - this was extra rich, slightly spicy and oh-so-satisfying. 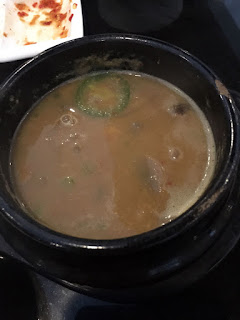 We enjoyed everything we tried and had zero complaints about any aspect. All the food was top-notch and exceptional as well as the service. It's unusual for me to give 5/5 stars to any restaurant on my first visit, but this restaurant gets my highest rating. 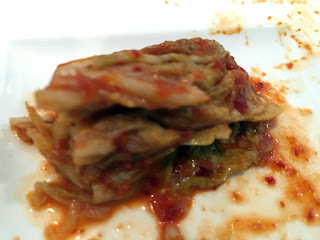