You can find this location of the Atlanta Bread Company at 1155 Mt Vernon Hwy NE Ste 1200, Atlanta, GA 30338 - this is the shopping center at the corner of Mt Vernon and Abernathy/Perimeter Center W (it changes names right around there) - the MARTA station is in the corner and this shopping center is right behind it - ABC is on the same end as the Regal theater. 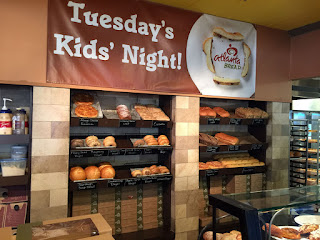 Admittedly, I've eaten at this Atlanta Bread Company (ABC for short) for many years. I've met her frequently for the various technology startups of which I've worked as they frequently don't have office locations. This is a great mid-Sandy Springs/Dunwoody location for a meeting and a less busy place to set up camp that also has free WiFi (Starbucks also has free WiFi but it's difficult to get a free table there). It's also convenient due to the MARTA station and proximity to both 400 and 285.

This fast casual concept should be familiar, you order at the counter from a list of sandwiches and soups, they call out your number and you pick it up. You can pour your drinks from the softdrink machine or tea/coffee dispensers. Not much that's too exciting here - I'd say the soups and sandwiches are fairly mediocre - although I've never gotten any stale breads here so that's a boon. Prices seem to be slightly above what they should be for this food but it's still in keeping with the area (Sandy Springs/Dunwoody seems to be slightly higher than elsewhere, but still a bargain compared to Midtown or Buckhead) 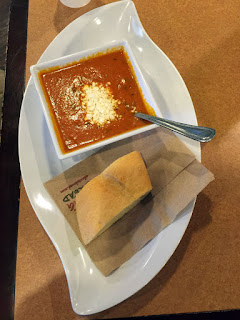 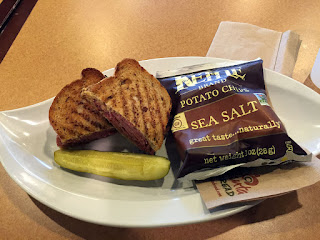 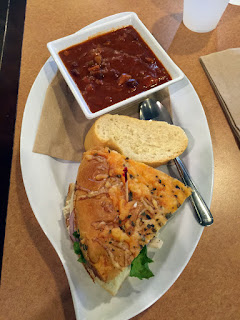 The best things on the menu are the paninis and salads, the soups a close second but as I've already said, nothing special here. If you're looking for special, head down the street to Alon's Bakery on the other side of Perimeter Mall. This is run-of-the-mill and right at the mid-mark of the scale, in my opinion. It's convenience may make up for a lot, however there's nothing quick about the counter service and the flavors are OK if not great. With all the other fast casual and fast food places nearby, this is just one option among a sea of many.

We've ordered from this location on occasion for office functions and they have been very prompt and accommodating. I think the sandwiches at Alon's or even Jason's Deli are better so keep that in mind. Also, I'm not much of a sandwich guy so keep that in mind as well.