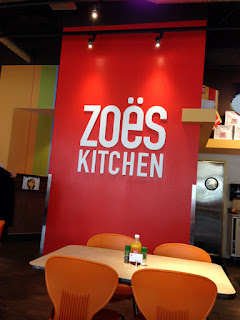 Not your usual Mediterranean restaurant, walking into Zoës Kitchen provides a visual mid-century modernist treat from first approach, featuring modernist orange colors and hanging white-sphere pendant lights right at the entrance (it's very "fresh and hip"). At Zoës you order at the counter from several items on a menu board that include most of what you would expect from a good Greek restaurant (not to say that the flavors are strictly Greek, but rather a more casual mix of Mediterranean with many more fresh salad and fruit offerings). The people at the counter are very knowledgeable about the food they serve, and if you're watching your calories they have an "Under 500" menu with selections calculated to be under 500 calories. 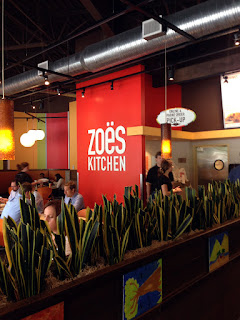 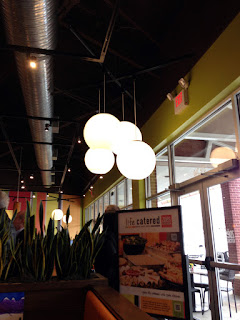 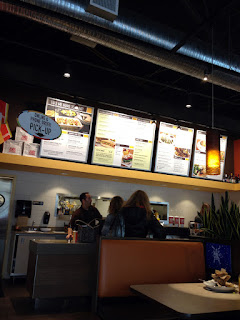 Prices are reasonable if not downright cheap and your food is delivered by the very nice staff in record time (at least at lunch - I've eaten there several times at lunch and the service was extremely fast - your experience could vary at other times). Drink dispensers are readily available to the right of the counter along with utensils and napkins. 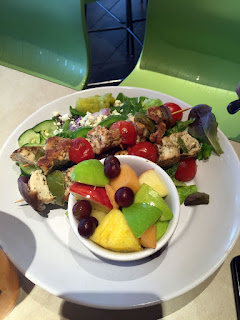 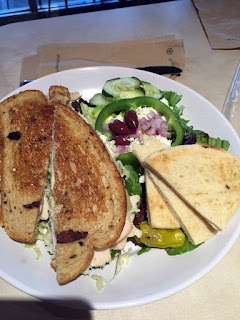 Another dish I'm fond of is the Grüben Sandwich - this is made up of sliced turkey, Swiss cheese, slaw and a spicy mustard on a nice blended rye.

Also, if you're watching your salt content then Zoës Kitchen seems to be on the very-low salt content side of things - that might be why there are some comments about the food lacking flavor. If you're used to most of the Greek restaurants you find in Atlanta you find a flavor-shift here due to the low sodium. Taste the food, not the salt, I say.

My dining companions have gotten a variety of dishes ranging from pasta salad, soup, hummus, other salads and meats including the gyro wrap and have all raved about the quality and inexpensive pricing. Actually, we like Zoes so much at work that we regularly order food from their terrific catering service. They also have a nifty app that allows you to win treats! 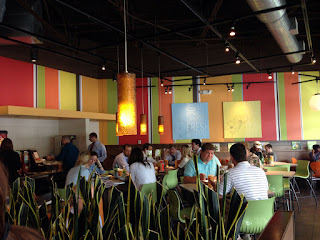 The restaurant offers exactly what the busy lunch-time crowd who work nearby needs - good healthy food served quickly. The only negative I've found is the parking situation right in front is rather competitive - however there's usually plenty of parking to the right of the short-strip in front of REI. I could see many from REI visiting this place, as well as members of the LA Fitness across the street (I frequent both). The ceilings are high so you would think it would be noisier when full, but I've found it still quiet enough for casual conversation. I don't remember any alcohol on the menu. The lunch line can appear long during peak times (pretty much to the door), but it seems to move quickly. Overflow for seating can sit outside at covered tables.

(Shorter review posted some time back on Yelp)