The Colonnade Restaurant is located at 1879 Cheshire Bridge Rd NE, Atlanta GA 30324 near the Morningside/Lenox Park neighborhoods (technically bordering them). You'll find the restaurant on the right crossing over Piedmont Rd if you're traveling from I85 onto Cheshire Bridge next to the Cheshire Motor Inn and across the street from Onyx (huge club with lots of neon). 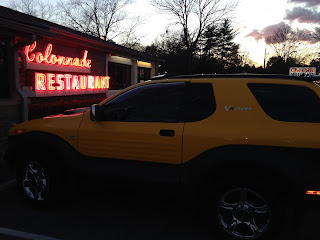 To get a real feel for Atlanta, one must experience this venerable classic southern restaurant. Be prepared for delectable fried foods as much of the menu follows that old southern cooking style, however there are enough other items (the pot roast comes to mind) for those who prefer their food without a layer of oily goodness. When asking about the veggies (there's a mess of them), ensure what you're interested in is fresh and you're good to go - my preference is the collards but that's just me. I ate there most recently a couple a few weeks ago for dinner - the special was the fish and chips. While the portion initially looked small (3 pieces of fish and a whole potato quartered lengthwise), I still left extremely sated and very full. It may have been the strawberry shortcake though - this is the best I've ever had, bar none. I think it's the heavy slab of Greenwood vanilla bean ice cream under the fresh-baked cake, or maybe the whip cream? It's hard to pin down, but fat-to-sweet ratio is spot-on. 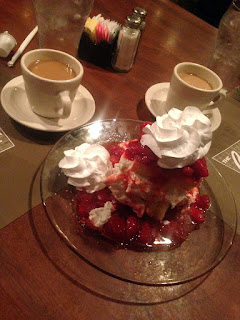 The Colonnade has also added a new chef so there's some occasional goodies on the menu you wouldn't typically see - for instance the lamb shank was exceptional. Make sure you look at the specials. 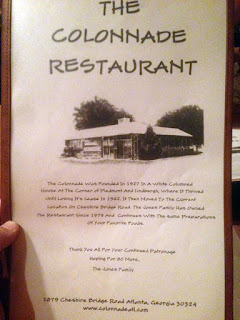 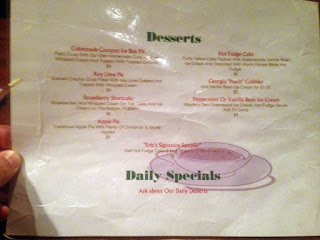 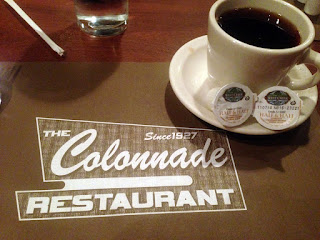 The restaurant is a bit hard to find - it's on Cheshire Bridge nestled between one of those nude model "clubs" on the left and across the street from some huge bar with oil derrick looking things (Onyx). Kudos to the proprietor for the new sign (it used to be this hard-to-see white sign with the name in block letters) - the new sign is beautiful, with a good balance of contrasting neon and letters more appropriate to the style of the place - it could have been 1.5 to 2x bigger though as it has to compete with all the other signs along that strip. The new neon on the building itself (by the entrance) is also quite striking. 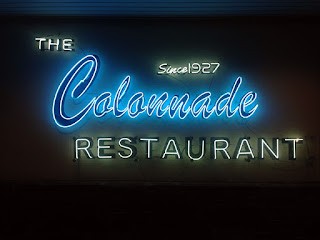 For ambiance, the restaurant is nothing special - the paintings of hunting scenes on the walls only add to the southern feel of the restaurant. Although this may not be every one's cuppa - it's certainly not the tired brass-and-fern formula of most tasteless chain restaurants. The wait staff is extremely friendly, if you get a chance ask for my neighbor Debbie B, who's been there many years. 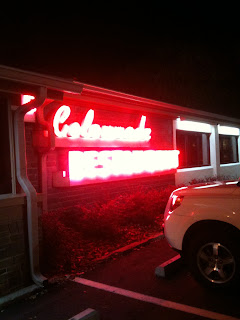 They offer a sort of "happy hour" slot during the week where some of the menu items are offered with a small dessert at a fixed price - a real bargain for those of you so minded. You'll have to call as I haven't been able to make it during those times (5 to 7 maybe?). The restaurant used to be cash or check only but recently they've come out of the dark ages and now accept credit cards.

(shorter version of this review originally published to Yelp in 2010)