Heirloom Market BBQ is located on 2243 Akers Mill Rd SE, Atlanta GA 30339 - I always think of Akers Mill is "the shortcut to the Galleria" so it's in a bit of a hidden corridor if you aren't familiar with the area. If you've been to Peter Chang's now defunct Tasty China 2 you'll know the way I go to access - I285 to Powers Ferry Rd, inside the perimeter, zig-zag on Cumberland Blvd to Akers Mill and you'll see the market on the left. 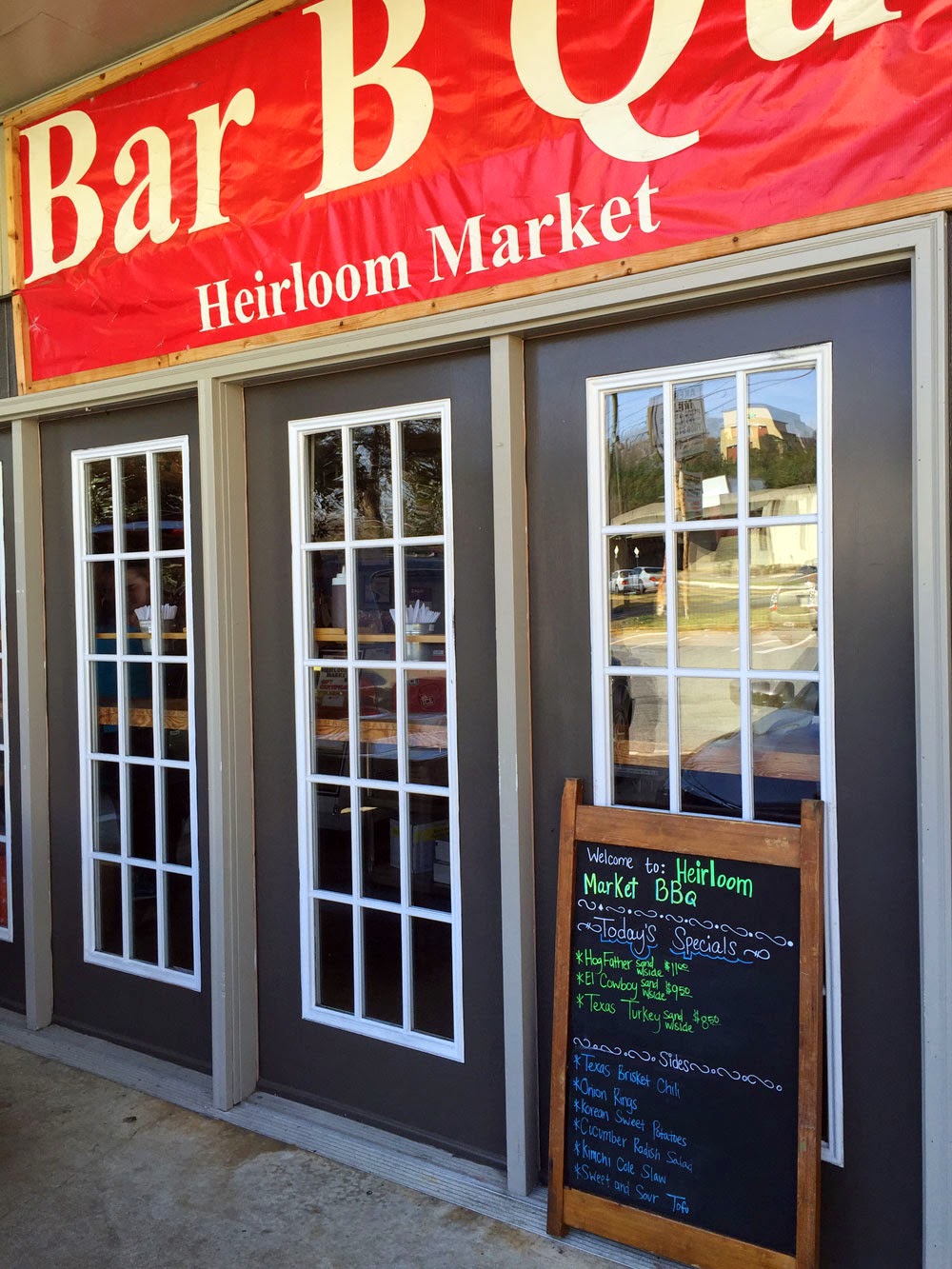 I first encountered Heirloom Market BBQ a few years ago attending a party - sort of a friend-of-a-friend occasion that was catered by this place. I was simply wowed by the quality, quantity and usual flavors presented and have since had if a few times at similar occasions, always as part of a pick-up or catered event. The thing that immediately struck my was the "kimchee slaw" which has become a favorite. I finally had a chance to visit the actual location with my friend Sangam. This was on a less-than-busy afternoon where we were both starving at work and had the extra few minutes to explore this out-of-the-way location. It actually took much less time than we had anticipated, probably due to the time (we left Northbrook at Abernathy/Peachtree Dunwoody at 11:00 and made it there in about 10 minutes). We took our time and made it back in slightly more than an hour. 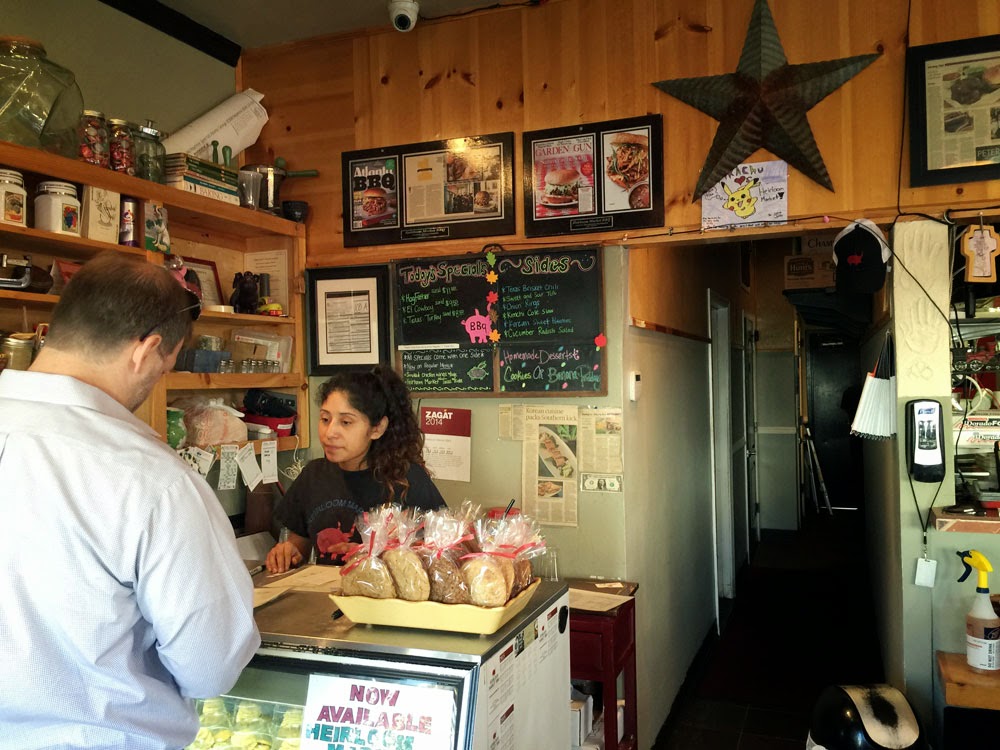 Some of you may be aware of Heirloom as it was part of Jim Stacy's "Get Delicious" special in October 2014 on BBQ. The great thing about that "expose" was that you you got to meet the chef/owners and learn a bit about what they do and their overall philosophy - I'd invite anyone to watch it (it cycles through on PBS or you can probably find the episode online). Heirloom manages a perfect melange of Korean and Texas BBQ - I believe they have achieved the best combination of the two cuisines in the perfect subject, the BBQ brisket. More on that later, meanwhile back to the restaurant.

Restaurant may be a bit of a stretch - don't expect your typical waiters or metal utensils. As the name "Market" might imply, Heirloom is more of a lunch counter where you order bagged items from a counter and wait for your number (don't worry, they are quick to deliver). The guys behind the counter are true magicians, producing these huge stacked sandwiches that threaten to fall-over and yet survive to be wrapped in paper. They are also surprisingly super-quick to put massive sandwich orders together - very impressive. 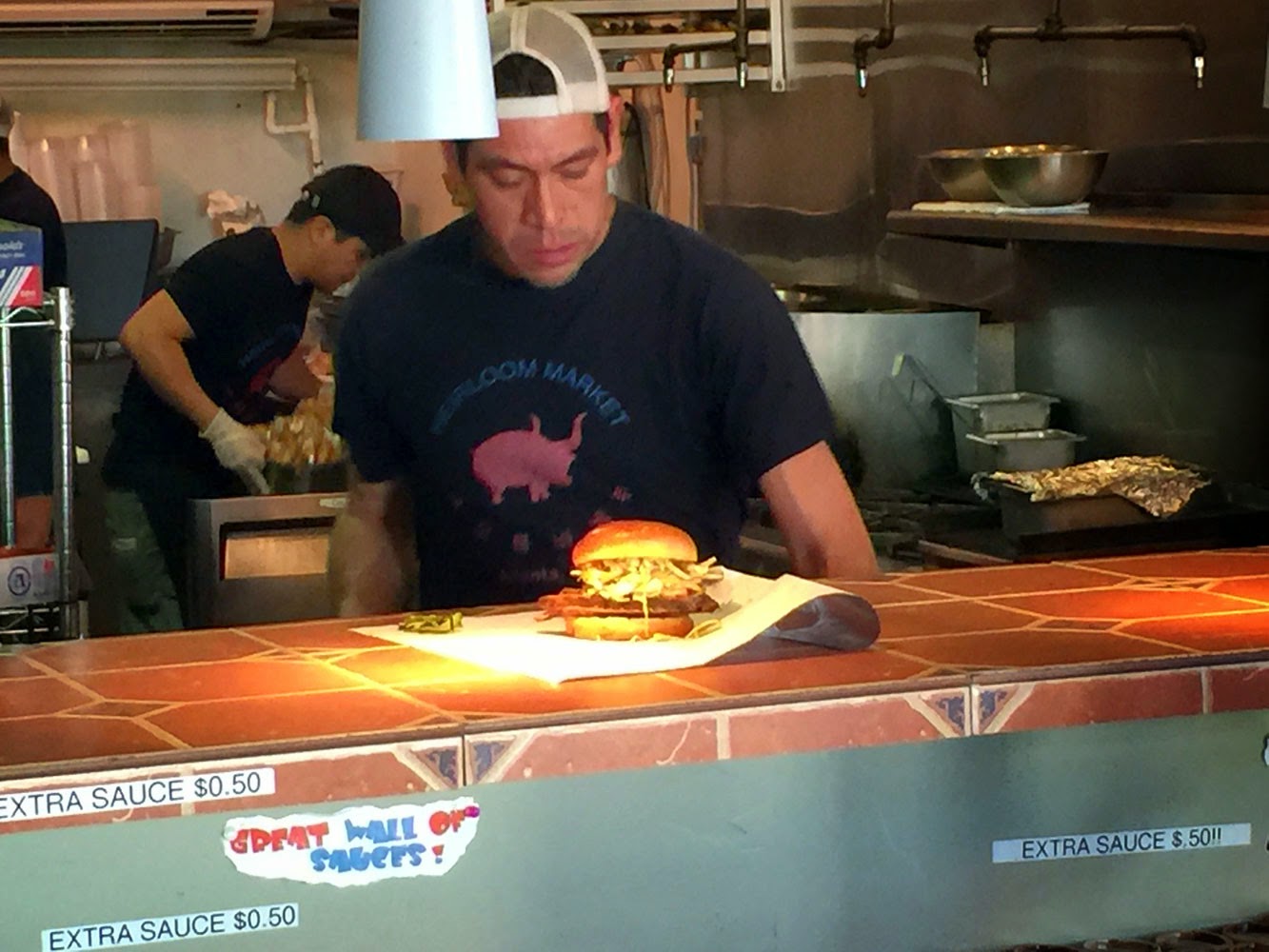 If you're lucky there's space at the STANDING tables outside in a small area behind their event trailer. You can share tables with total strangers and wax poetical on the delicious food. We all speak a common tongue while eating Heirloom - sort of a cross between Korean, English and satiation.Drinks can be ordered at the counter or pulled from a standing reach-in but really, you should just opt for the sweet tea. The menu is simple - order sandwiches with one or two sides or by the pound. Prices may look a bit high but the portions are large and the food is hands-down delicious. 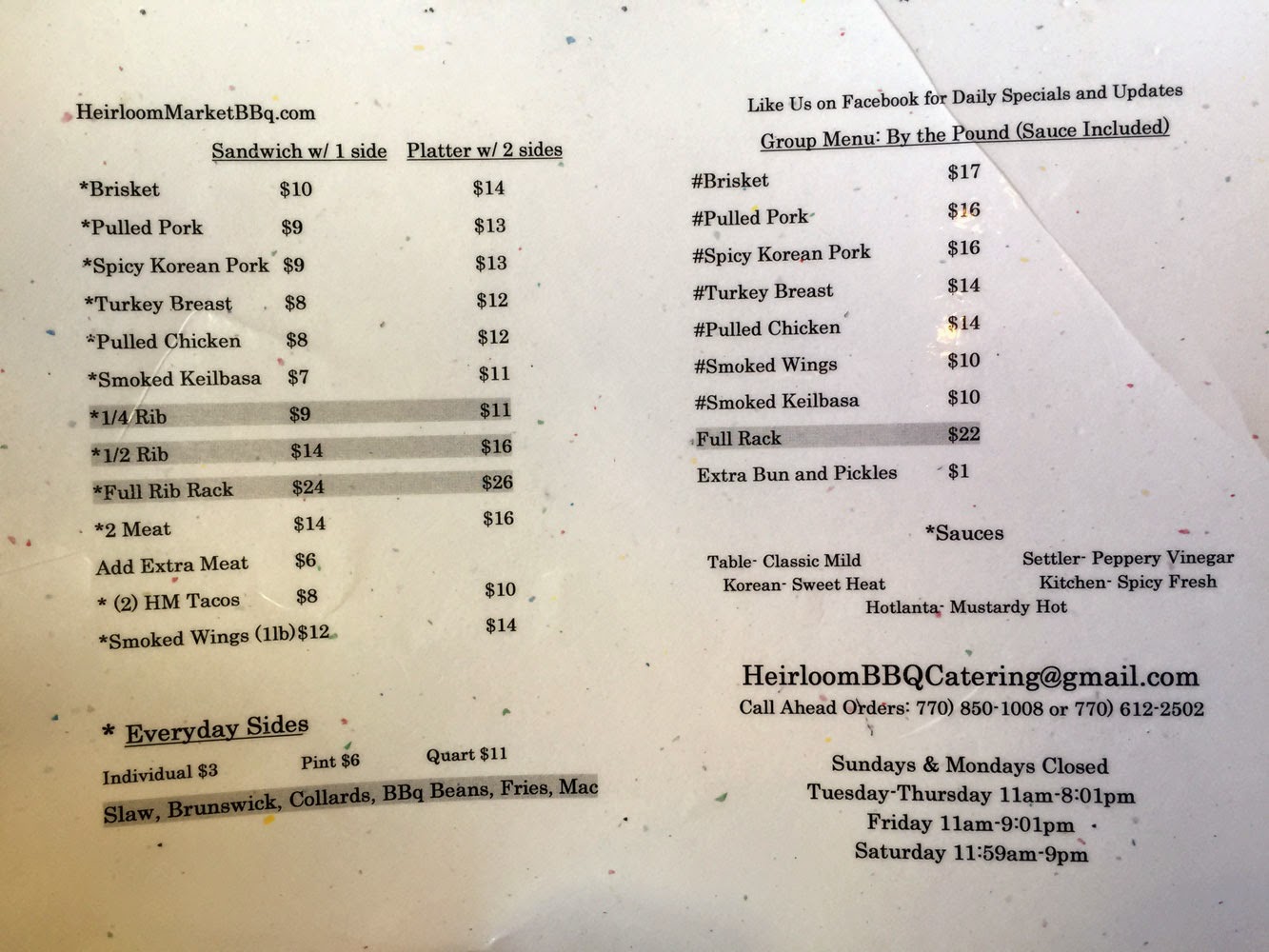 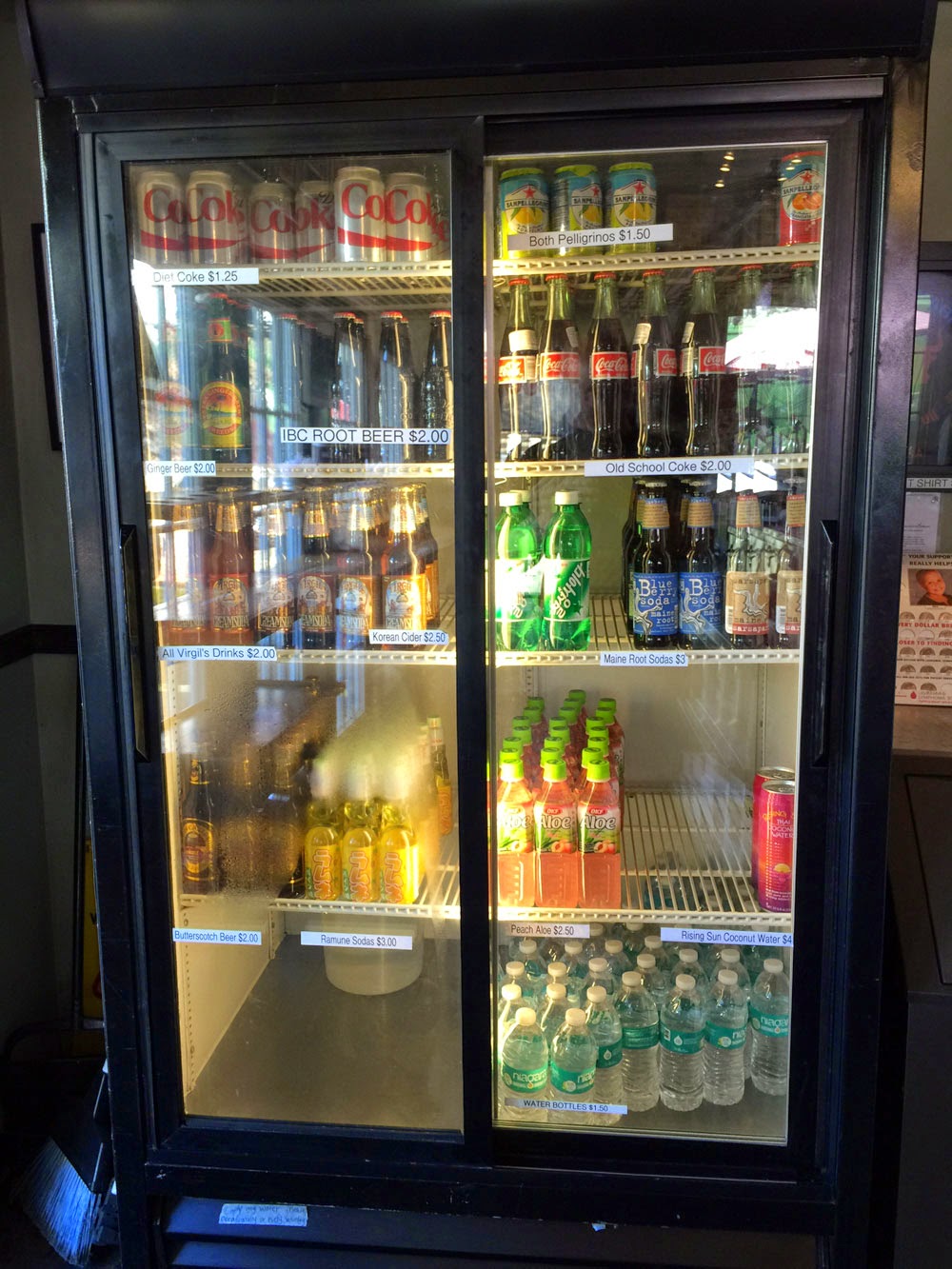 On this occasion we ordered an assortment of food including: Pulled Chicken Sandwich with Kimchee Slaw, Beef Brisket with Kimchee Slaw and Korean Sweet Potatoes, and a one pound order of Wings.

I'll start with the Korean Sweet Potatoes which I forgot to photograph - these were thin sliced with a super-sweet glaze and quite delicious - more of a dessert than a side - I think I'd go for something more savory in the future as many of the other items have a sweet edge.

Pulled Chicken Sandwich - this is a really impressive sandwich with chicken slivers sauced and served on a large bun - it's difficult to realize the scale. The kimchee slaw makes a perfect side, but really, putting a good bit on the sandwich makes it extra, extra awesome. 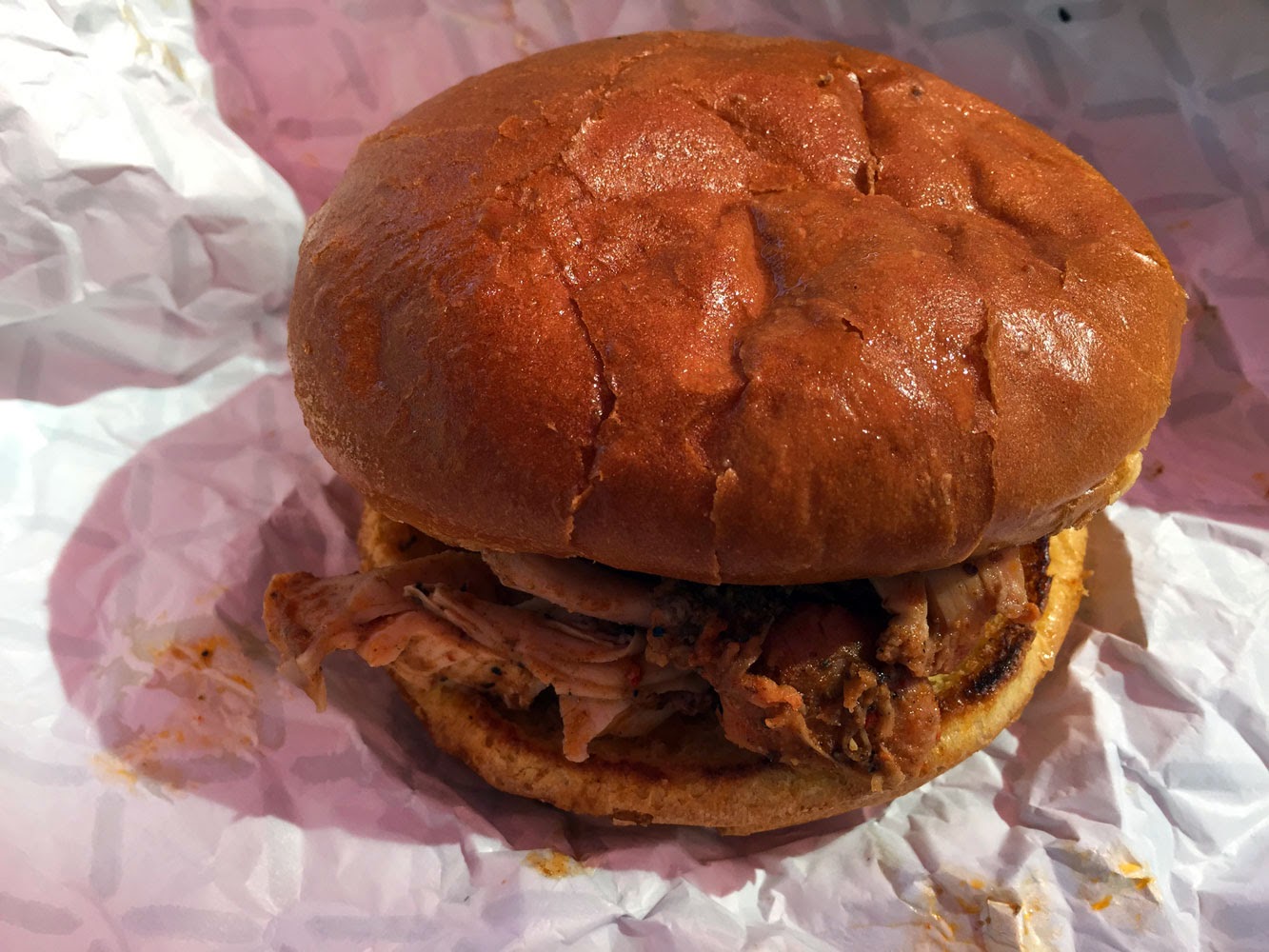 Even if you don't like the pickled texture or smell of kimchee, don't worry as this is "fresh" style - basically many of the same heated ingredients mixed into fresh cabbage, so there's little of the fermentation (smell, texture, etc) that you get with real kimchee. 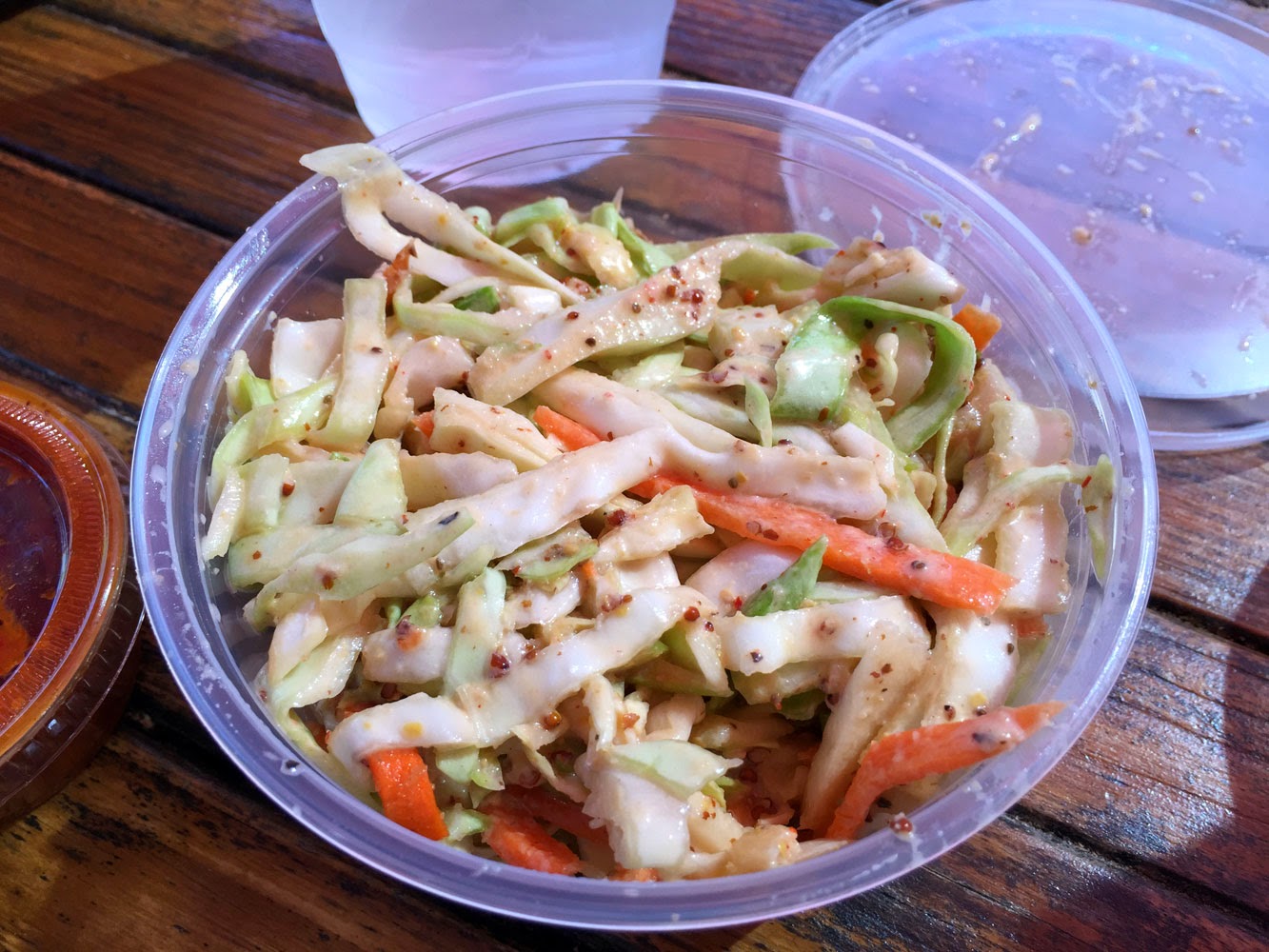 I mentioned it before, but I'll say it again. I think the brisket at Heirloom is the best I've had in Atlanta (I sampled quite a bit of Brisket while in Texas - of course in that great state BBQ means beef and in particular brisket, not pork like the rest of the south). For some reason the various BBQ establishments in this region only think about pork when doin' the smoke - and since beef tends to be an afterthought, it's usually super riney (good) but dry-as-a-bone (bad). I'm happy to say that Heirloom takes their brisket seriously and delivers a delicious, juicy pile that's sure to make even the pickiest BBQ aficionado happy. This meat is smoky, juicy to the point of running-down-your-arm and oh, so good. I'm not sure if they do the super tenderizer method (like in Texas) or some other but the results are the best I've found, hands-down. 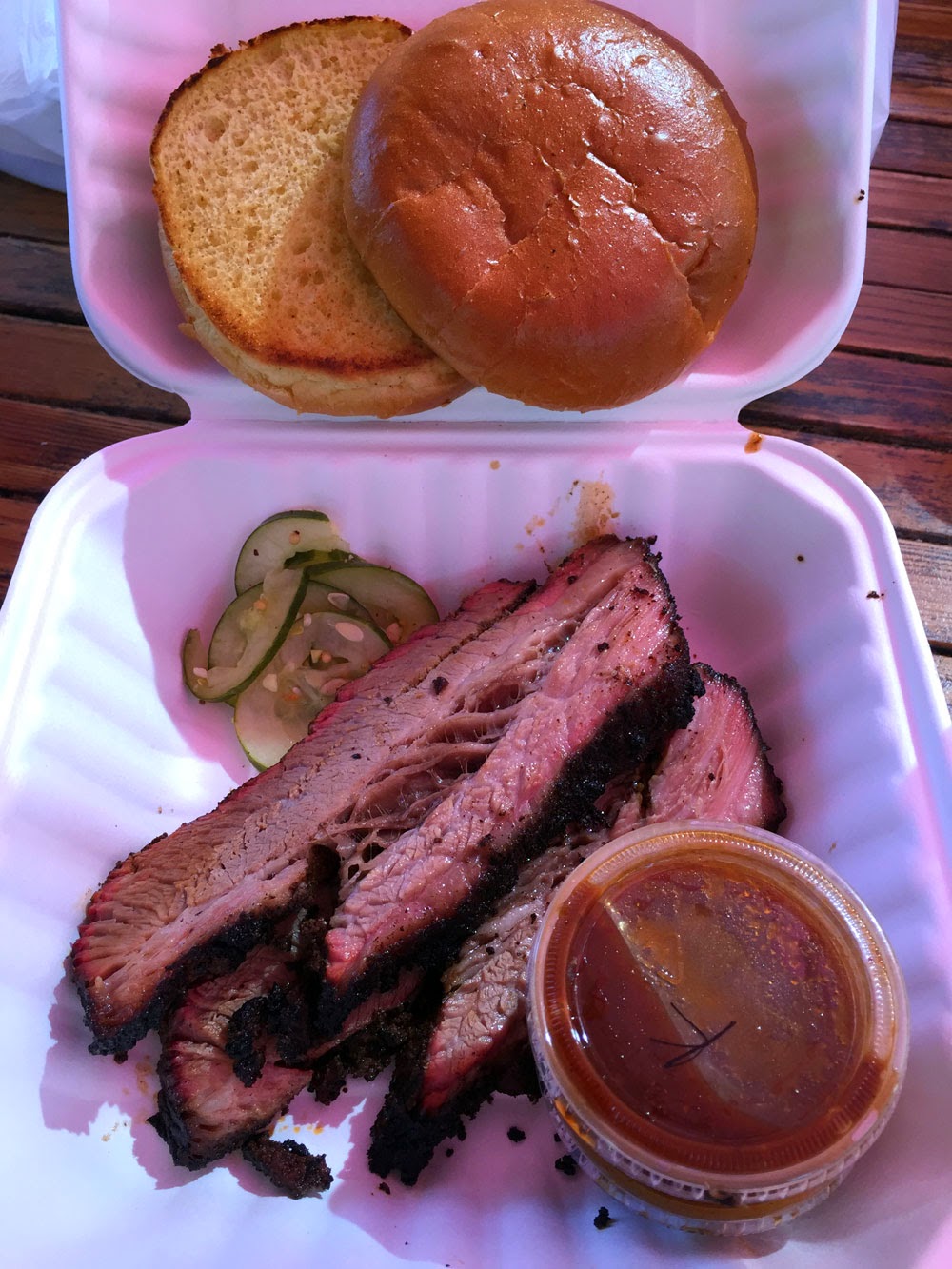 As a bonus I also ordered a pile of wings - these were smokey, sweet and spicy - in a word, perfect. I think I could live off of the wings alone, but if I were to settle on a single item, it would be the brisket. 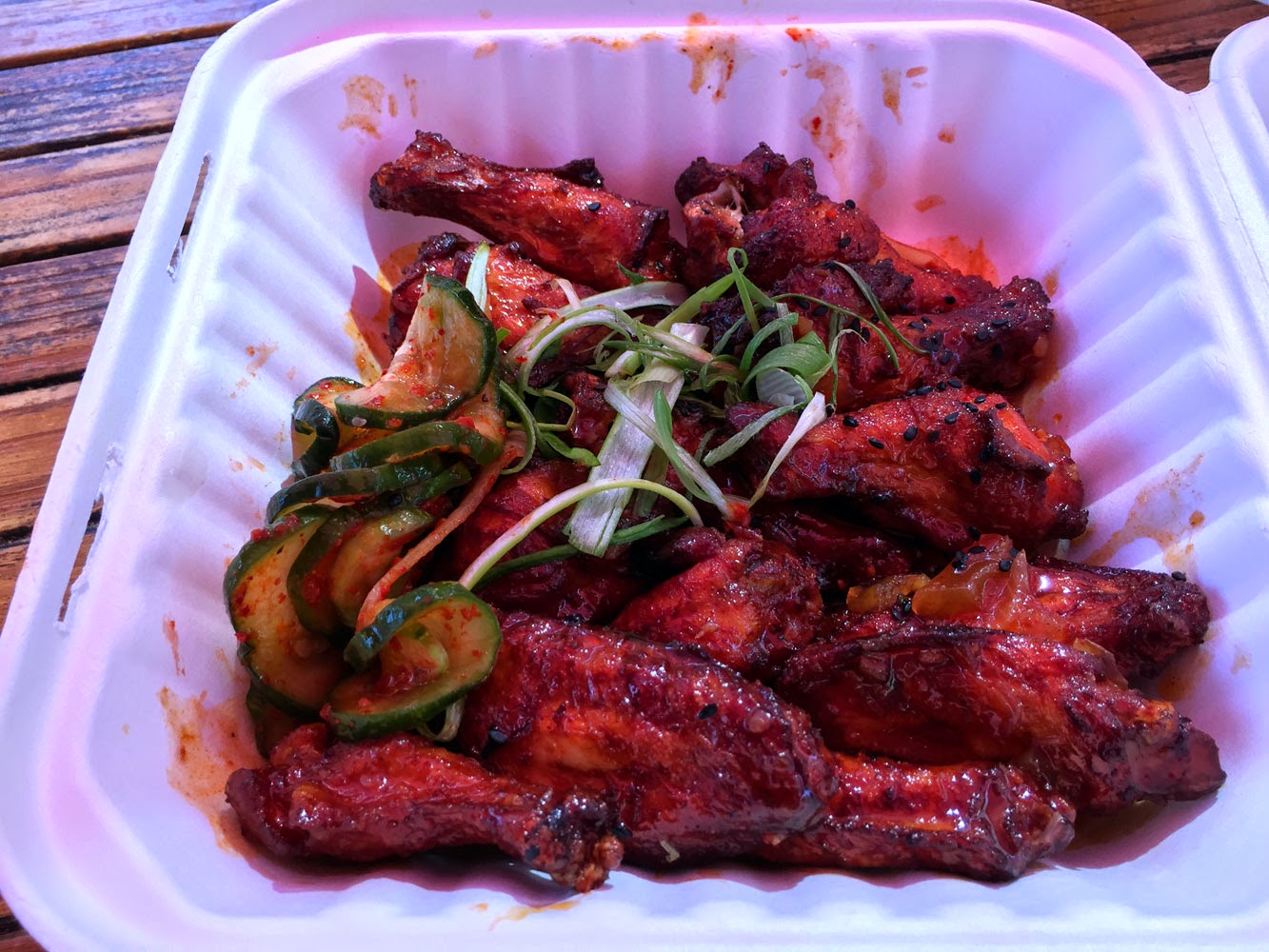 Parking is a bit limited and with the standing-room-only dining situation I believe most take-and-go. It might be worthwhile to call ahead, pick up and take this great food to a local park (gotta be places along the Hooch, right?). Closed on Sunday and Monday so take that into consideration. 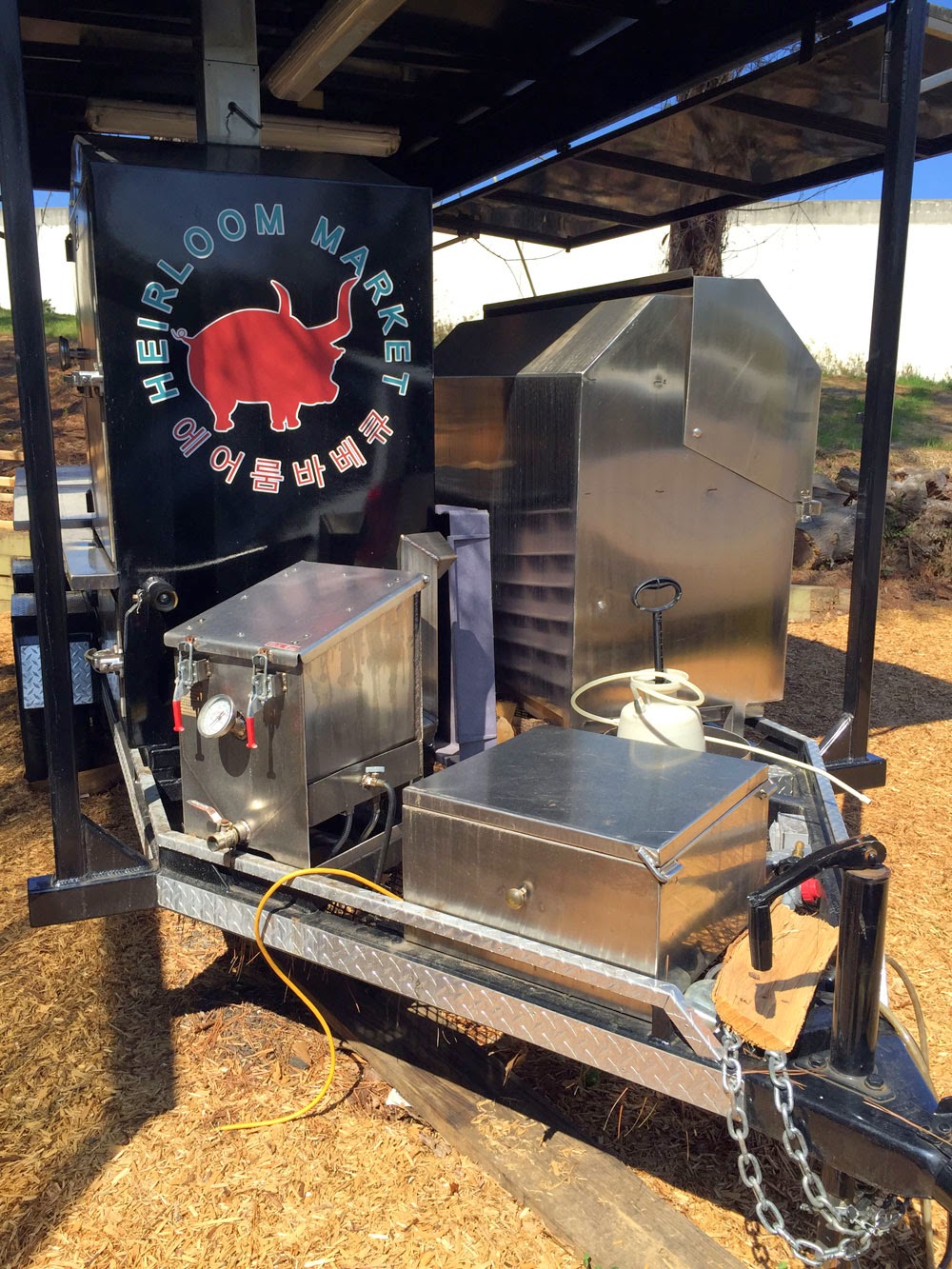 On the available sauces - I don't think there's anything special there but the assortment is good, from sweet to spicy to vinegary to mustardy - sort of the standards you usually see. I'd like to see something that's a bit soy-saucy, sweet and special but to each his own.

So what are you waiting for?