(much shorter review also posted to Yelp)
BawarcHi Biryani Point is located at 6627 Roswell Rd, STE A, Atlanta GA 30328 in the same Publix shopping center that hosts Ippolito's (it's a couple of business to the left of Ipps) in the former location of a different Indian restaurant (from what I recall). The storefront is very unassuming and belies the delicious goodness found within. 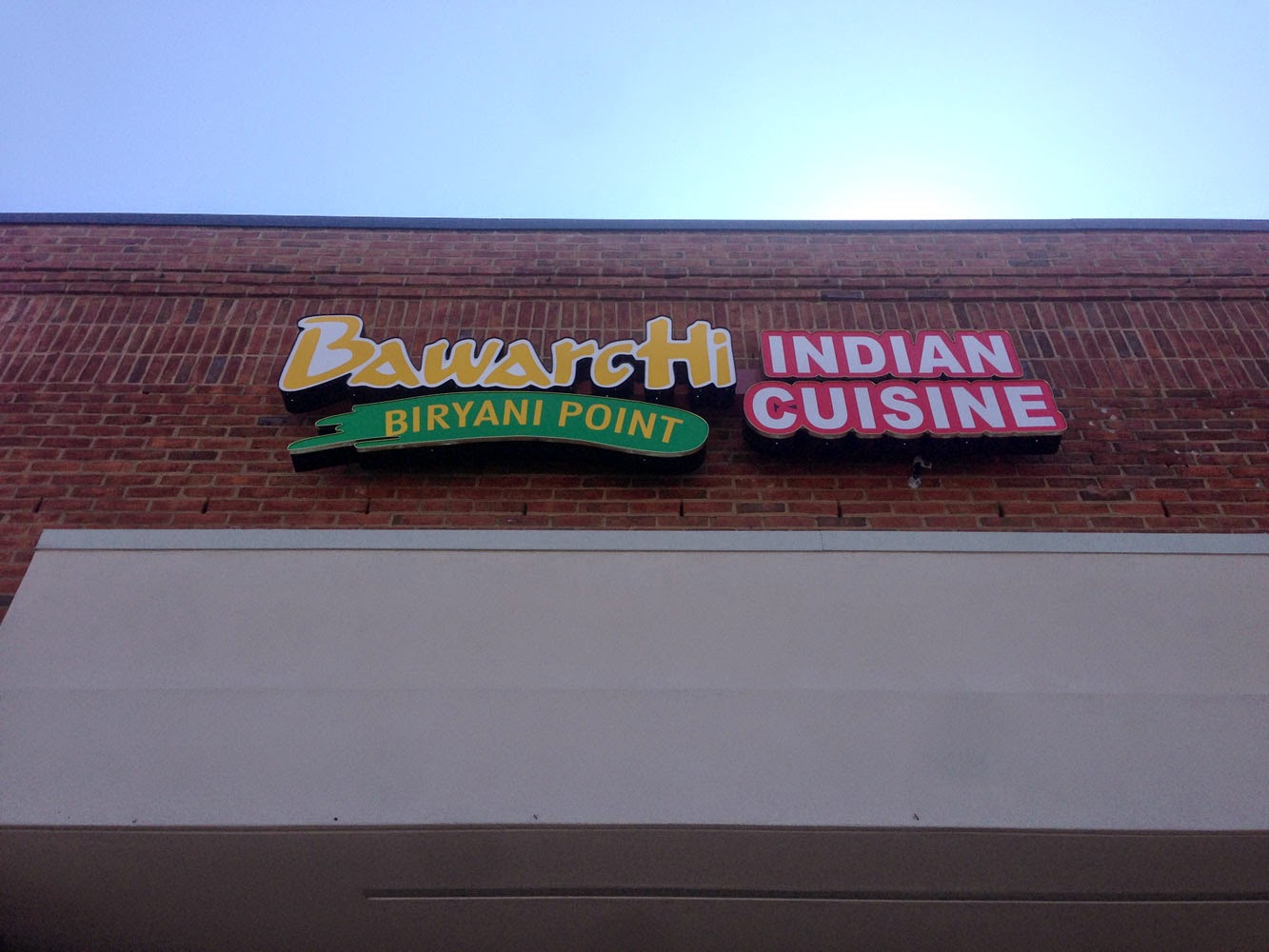 I had heard about the restaurant (part of a chain) previously and finally did lunch here with a group from work including several Indians and vegetarians. We were able to sample several dishes, with the star being the biryani. I like to describe biryani to those uninitiated as "Indian fried rice" - not that it's fried, but it does approximate what many Americans have tried that's similar in classic Americanized Chinese cuisine. Biryani is found all across India, assoicated with Mughlai cuisine in Delhi, the Awadhi cuisine in Lucknow to the North, and with Hyderbadi cuisine in the South. Biryani is made by combining spices, herbs, butter and in non-veg traditions, meats and fish into the rice as it's cooking - you'll also see some varieties with nuts such as cashews and dried fruit like raisins. The flavors infuse into the rice and the results go way beyond the "toss with soy" familiar Asian fried-rice.

I was excited to try BawarcHi as I fell in love with biryani while visiting India earlier this year. Being Asian, I usually prefer basic sticky rice over fried rice - and the usual Chinese stuff doesn't work for me when I do feel like it fried - my preference is the egg fried rice you find in Japanese restaurants. You do need to be a bit careful as the cooking experience often involves whole seeds - nothing like getting a bite of whole clove, a cardamom pod or a star anise fruit. Meats cooked into biryani provide superlative flavor that produces a melange of subtle spices, sweet herbs, savory meat and of course the rice as a base. You can basically make a meal out of a biryani by adding a bit of raita (Indian style, it's a spiced curd aka yogurt in Western culture) that's puddled in the biryani to make it creamy and of course a naan (my favorite is fresh garlic naan). 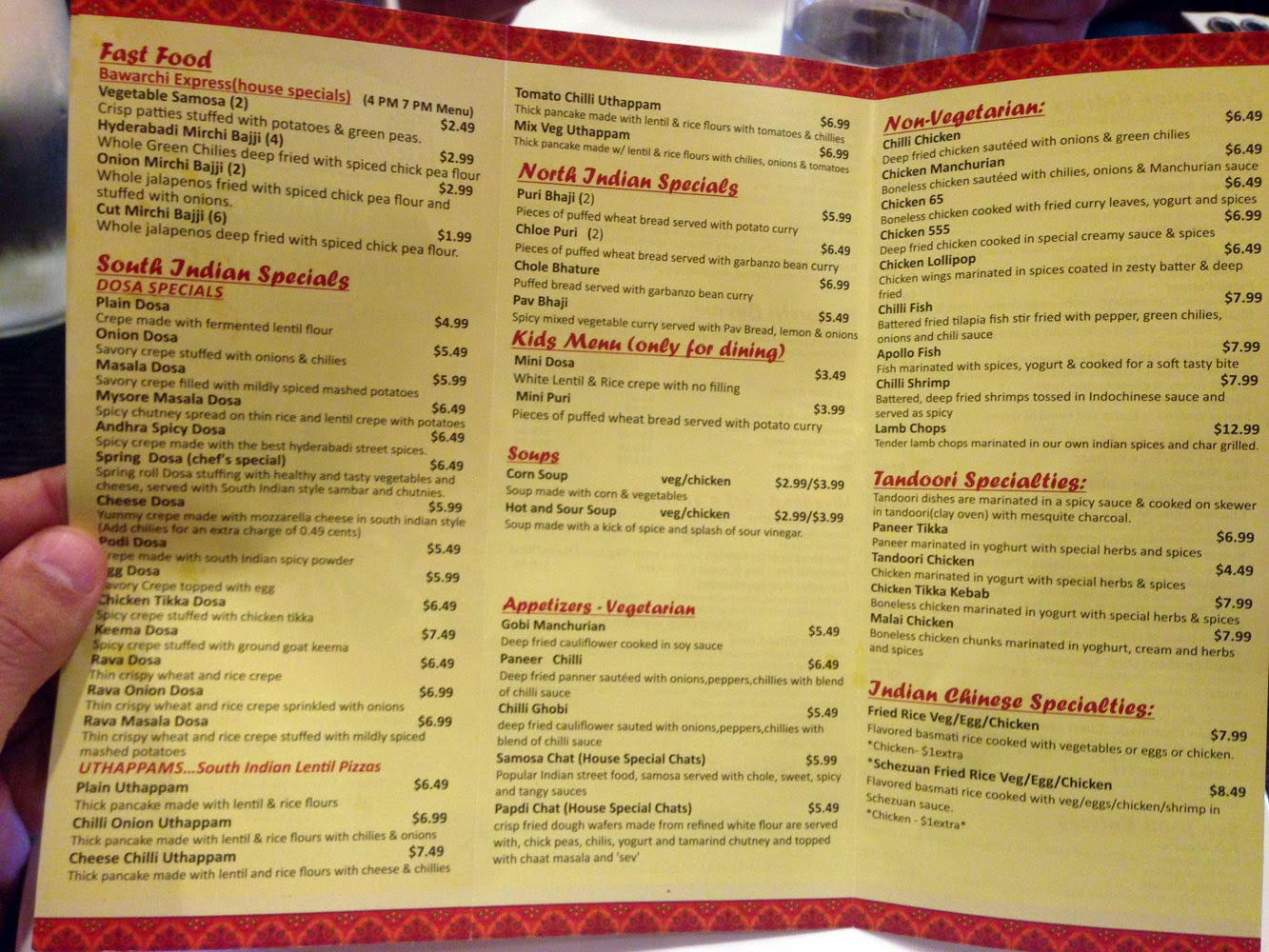 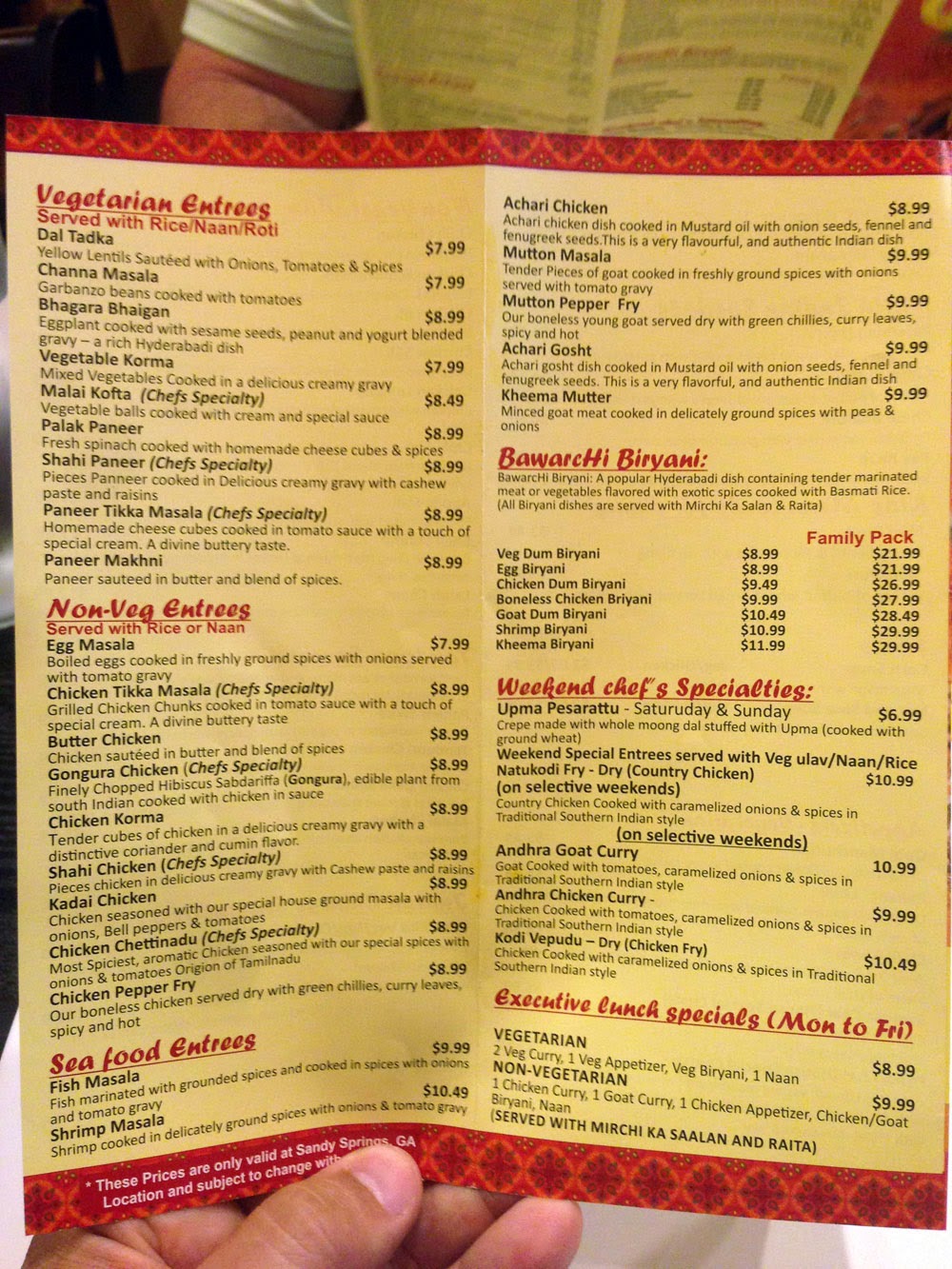 Our group during lunch comprised 7-8 people so we ordered a variety of foods. For appetizers, we ordered Chicken 65 and Chilli Chicken - both were quite good and disappeared before I could get photos of them - actually much of what we tried went too quickly for me to get good shots. I had a bit of discussion with my friend Sangam regarding "Chicken 65" - I've seen this before, most recently at Himalaya's on Peachtree Ind - but where did the name come from? It's basically a vinegary chicken with ginger, garlic, red chilies and curry leaves originating from the Chennai region. One story says that it takes 65 ingredients (obviously false), another that it takes 65 days to make the marinade (not likely) or that the chicken is parted into 65 pieces. The most likely is that the dish was introduced in 1965 by the Buhari Hotel (who also offers other numbered dishes relating to the date introduced).

We ordered two biryanis - a Boneless Chicken Biryani (which I highly recommend) and a vegetarian Veg Dum Biryani - both were quite delicious and either could be shared by two - they are served in large crocks. 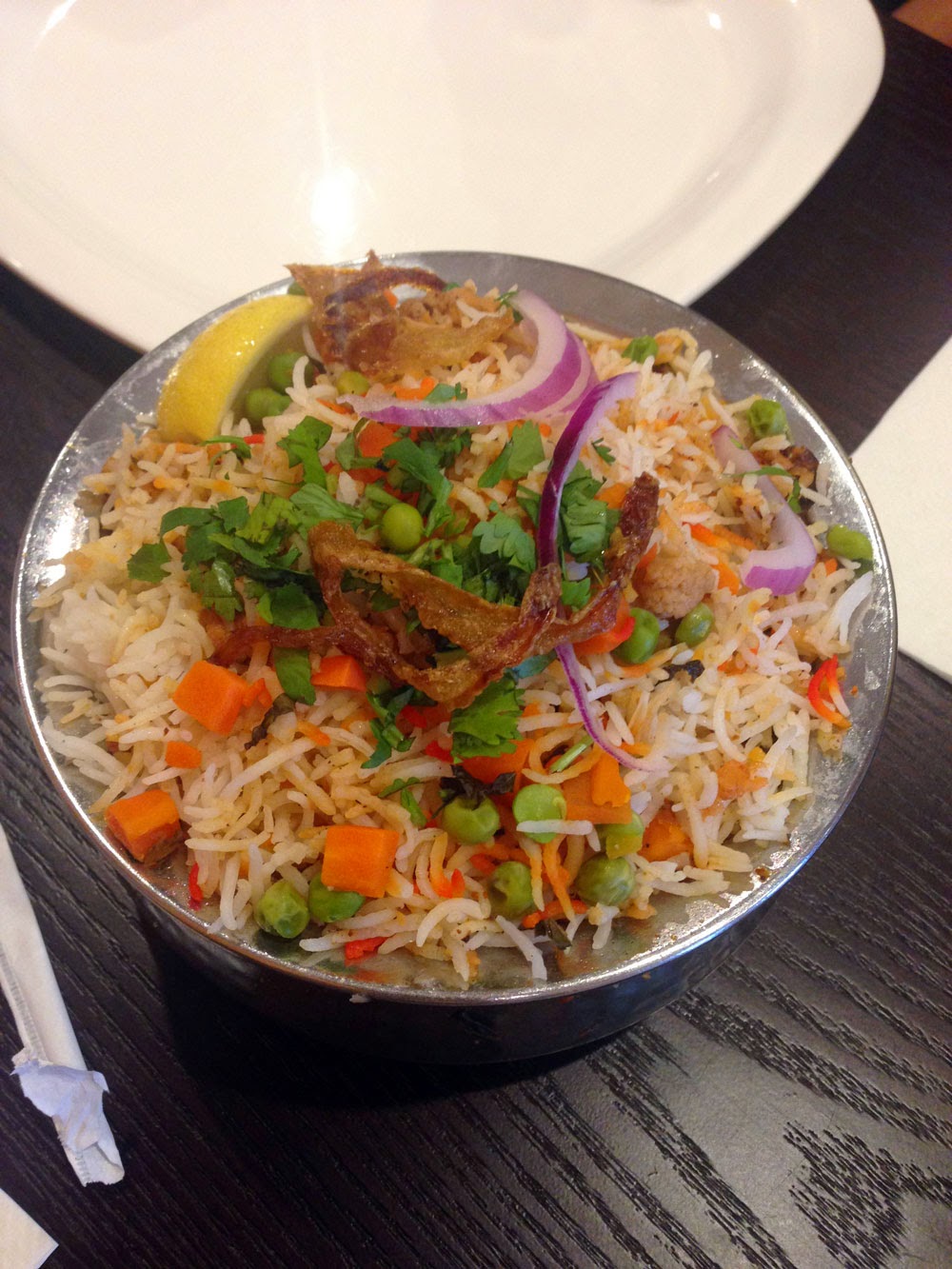 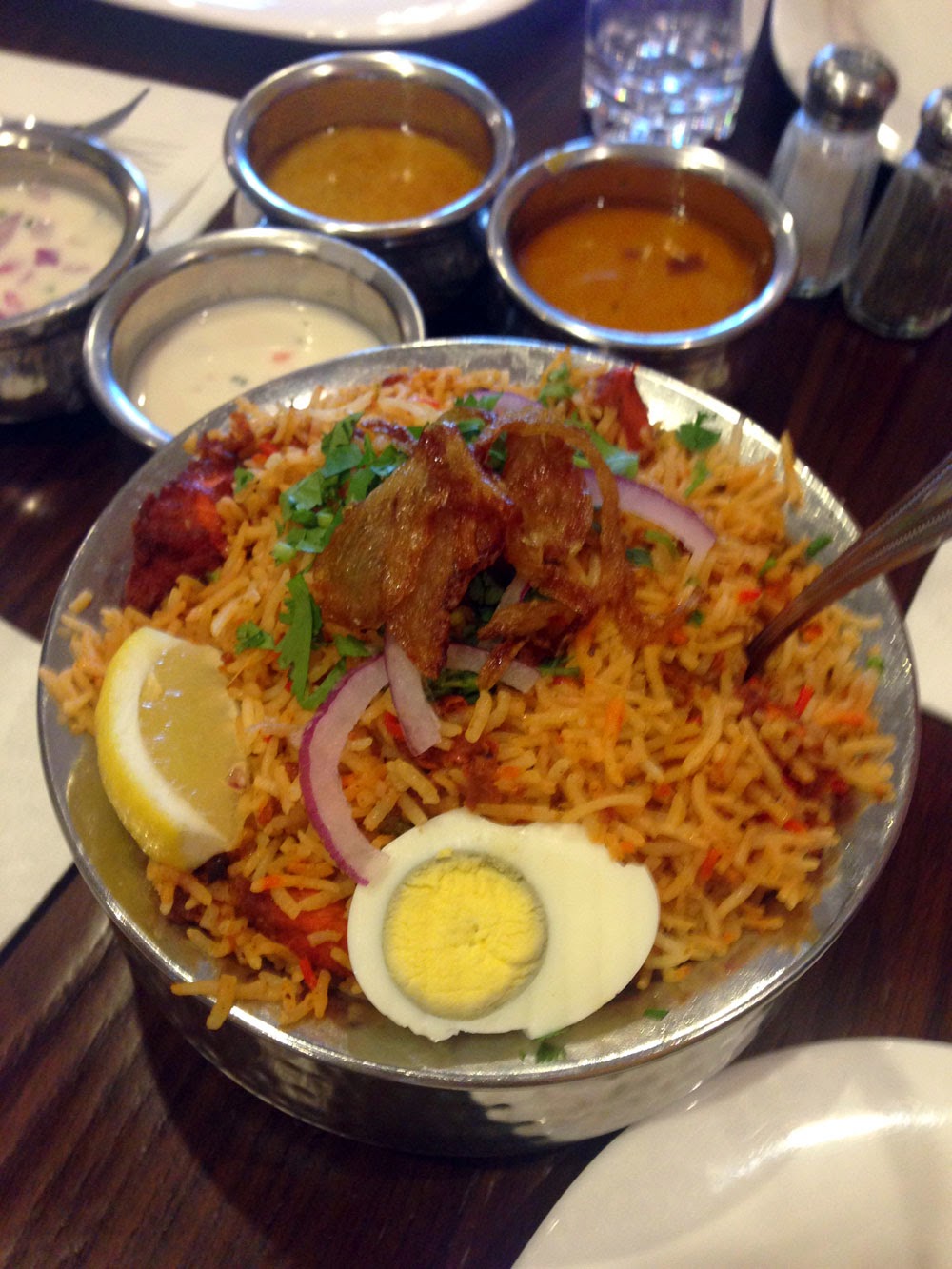 We also ordered a Paneer Makhni and an Egg Masala (those for the vegetarians), a Chicken Tikka Masala and a Mutton (goat) Masala - all were quite good - the egg was a bit weird to me (whole boiled eggs in sauce). Accompanying was a double order of garlic naan. 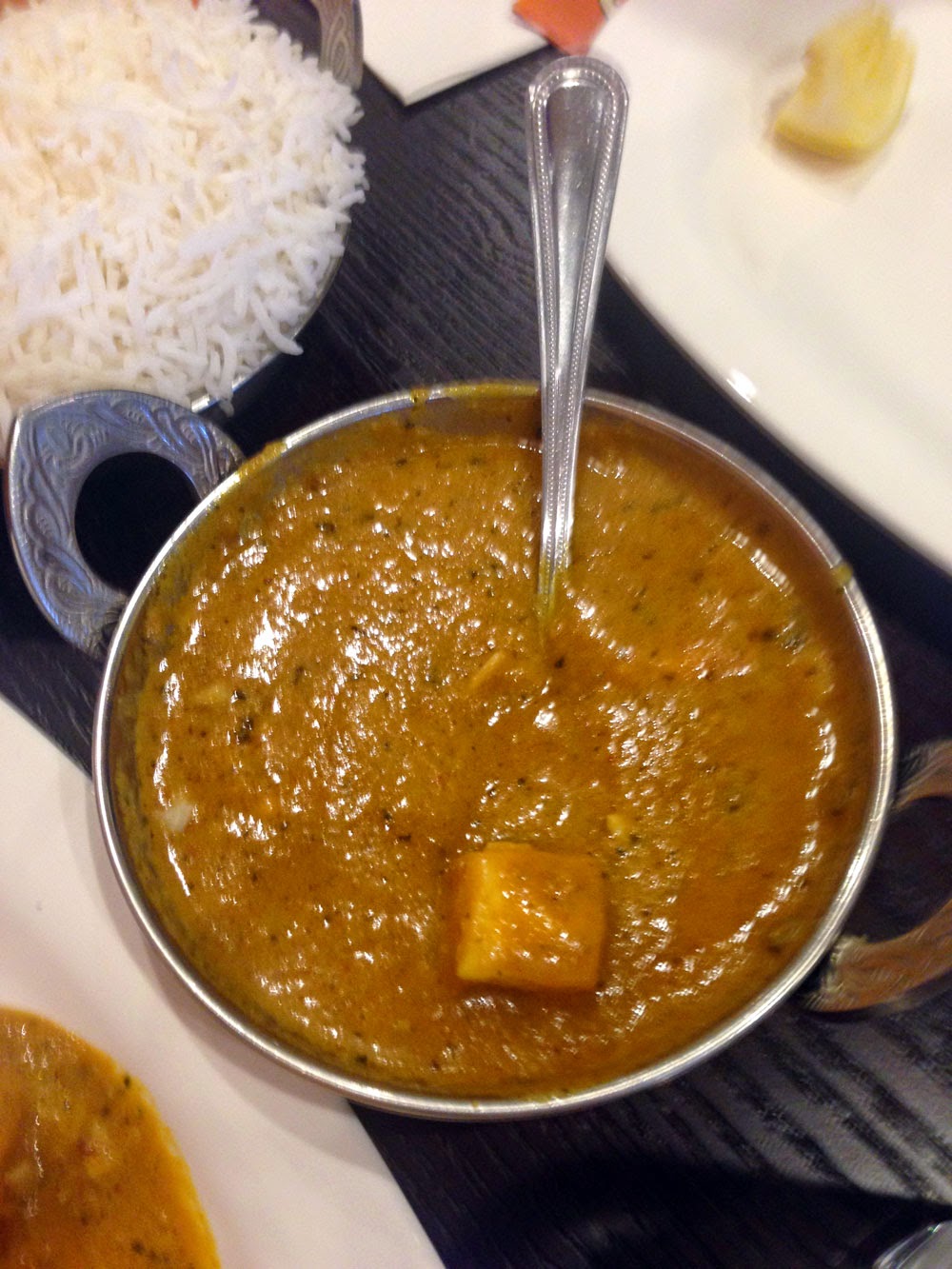 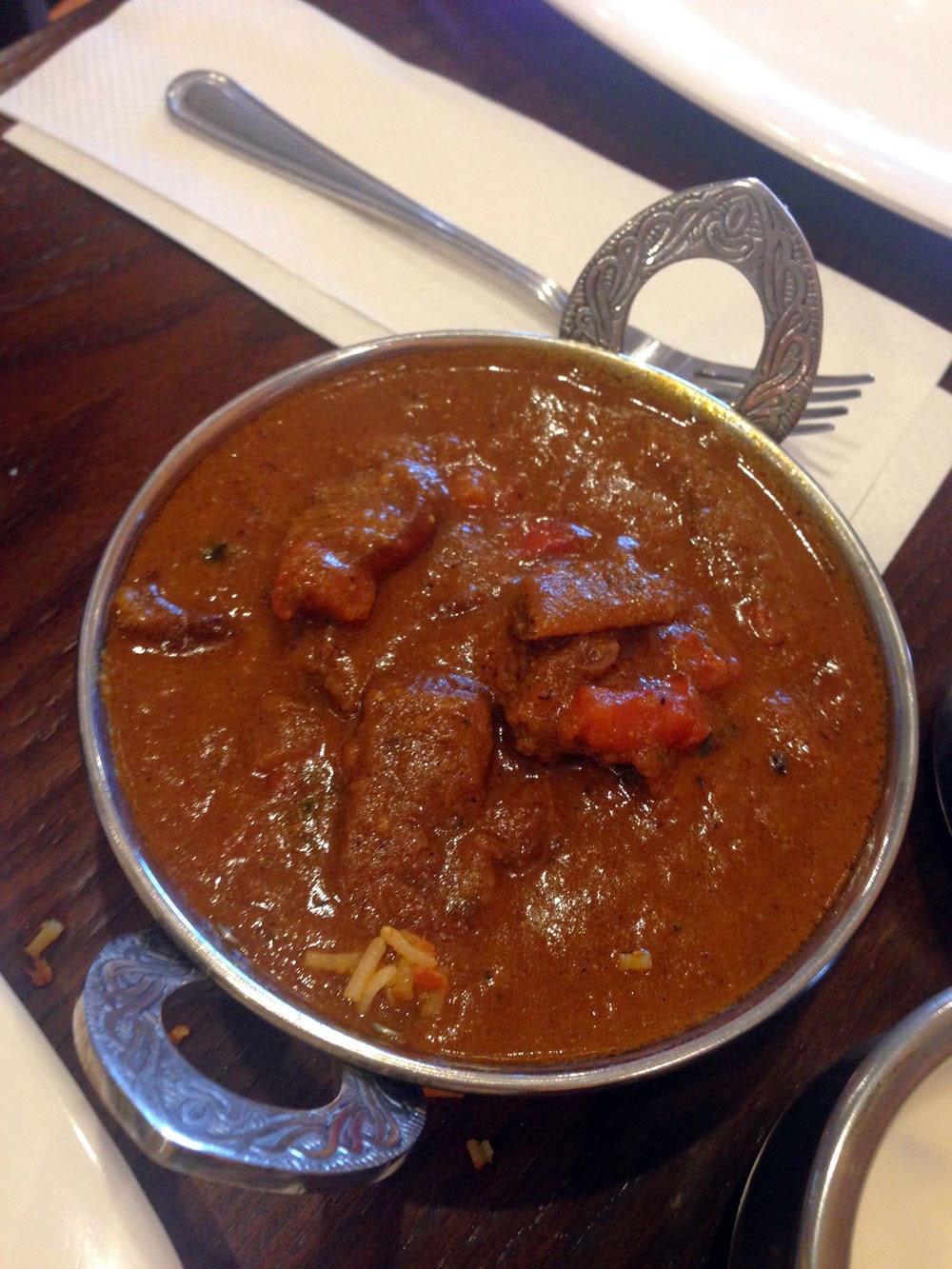 I spotted a huge Masala Dosa being carried to another table - this became my favorite Indian breakfast item - basically a thin crepe stuffed with spiced potatoes served with a trio of chutneys - quite delicious and the version I spotted at BawarcHi looked great (though it was missing the traditional banana leaf "plate").

In general I thought the food was mostly very good - with the biryanis being the best dishes. Service was a bit spotty (expected in a new business). This will become a regular stop for my lunch group.