(a shorter review also posted to Yelp)
This location of Bantam + Biddy is located in the middle of the venerable Ansley Mall, located at 1544 Piedmont Ave. This is a hectic, thriving area close to town as many seasoned travelers to locations like Piedmont Park and the Atlanta Botanical Gardens will attest. 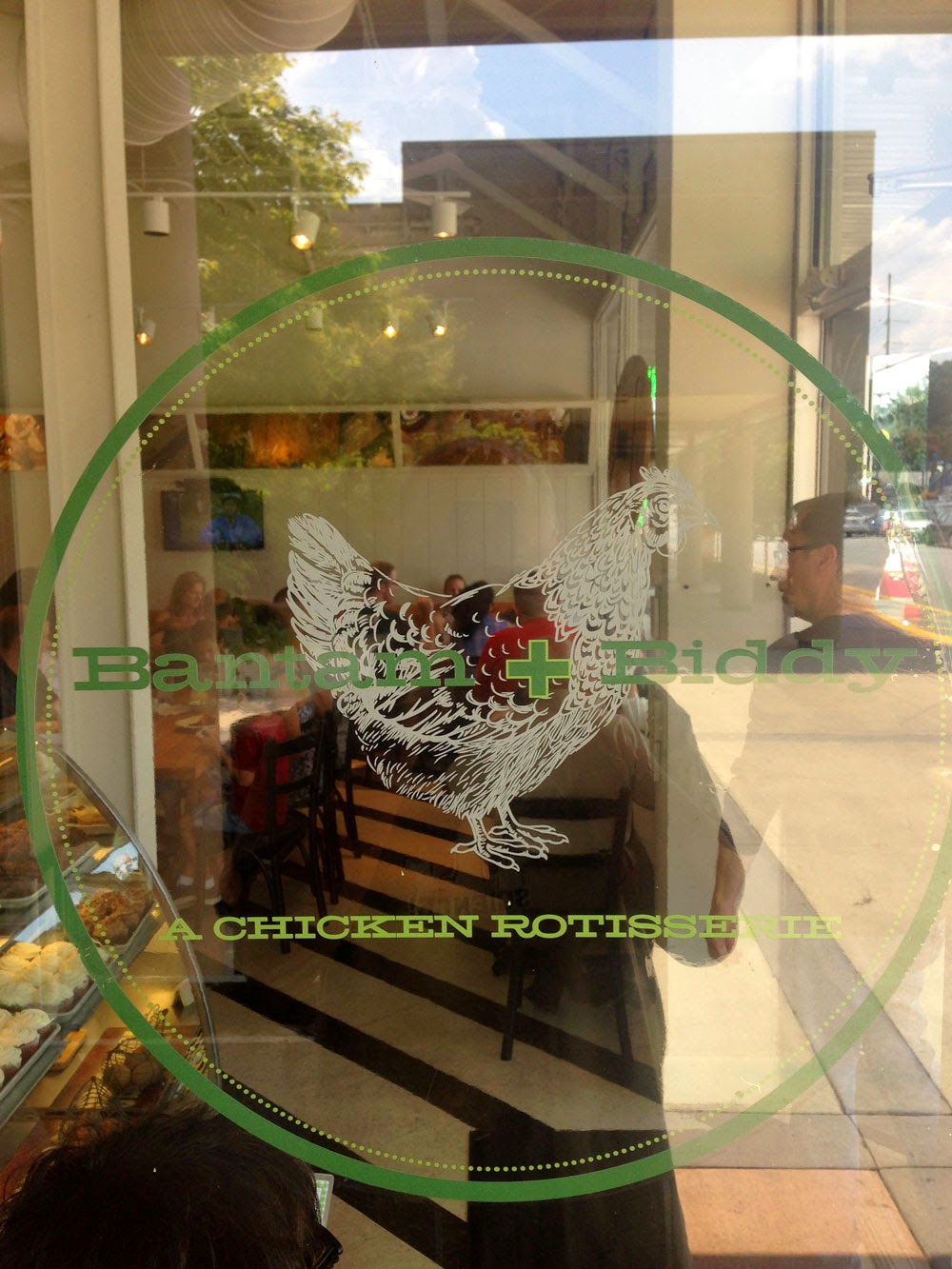 Bantam + Biddy is an interesting breakfast-y joint along the lines of the original Flying Biscuit or J. Christopher's, before they became all franchised up and ubiquitous like weeds. The name derives from Bantam cock and Biddy hen - a fairly Southern expression that translates well into breakfast foods with an emphasis on eggs and chicken. This location is on the smallish side, inhabiting a long, narrow space about in the center of the long side of Ansley Mall. The dining room extends to tables outside in the Ansley courtyard. Outside there is a welcoming chalkboard listing some specials and some great Rob Land artwork (random creepy chickens!) along the glass front. 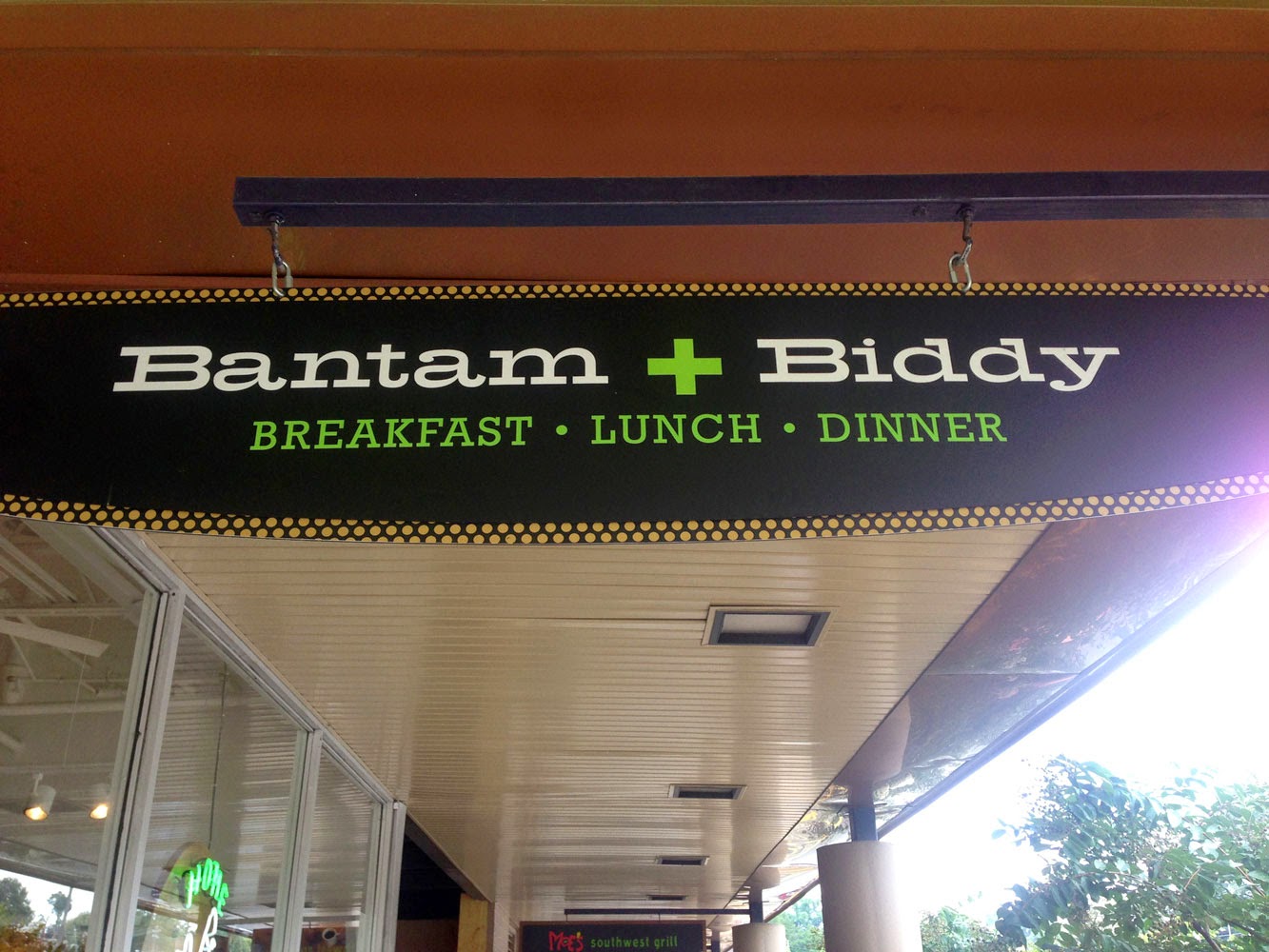 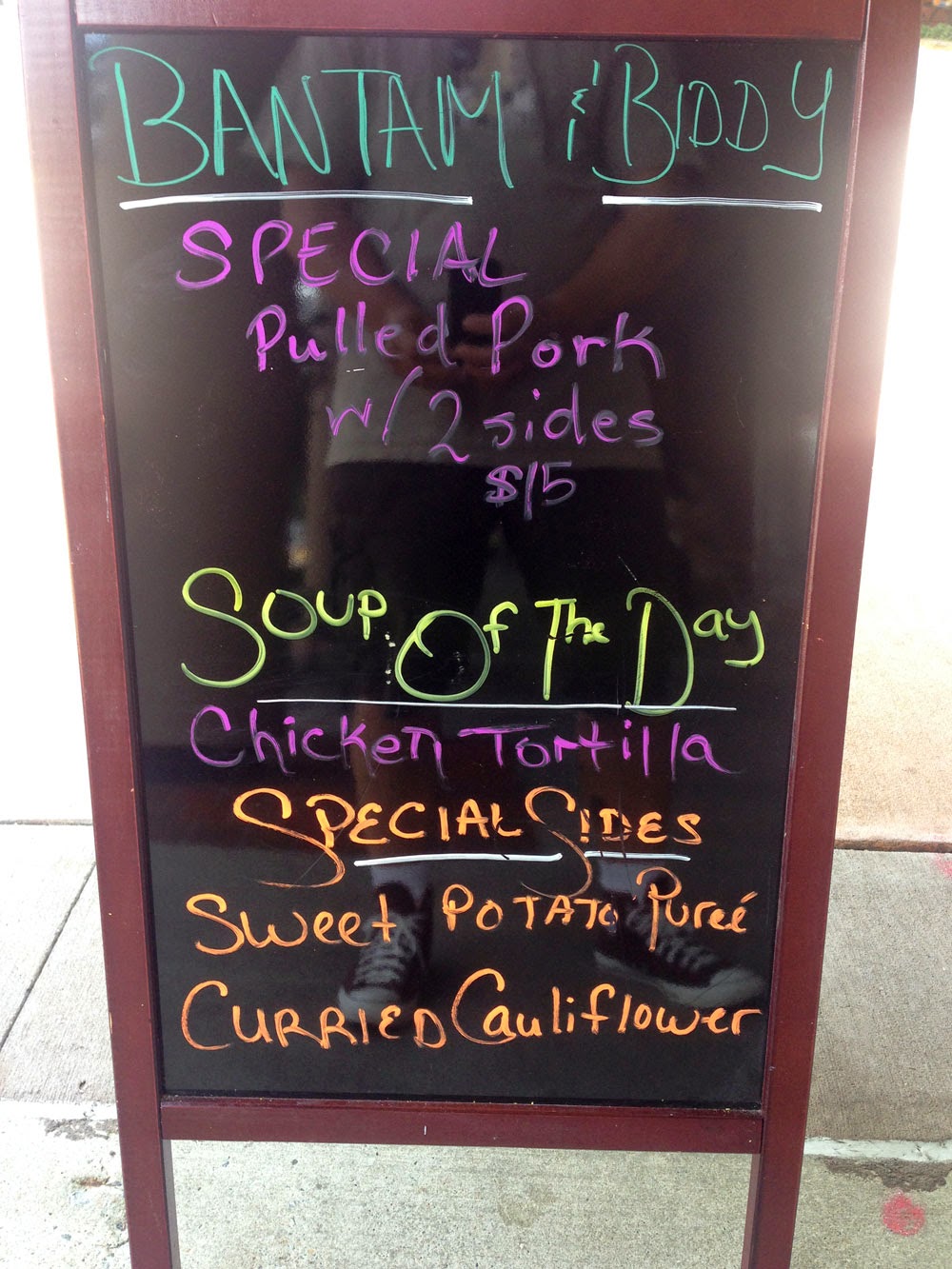 The restaurant is thrift-fully decorated in a modernist fashion with styling queues from old pantry-style restaurants from the 30's - I liked the furnishings quite a bit, especially the chalkboard of specials and the dessert case (filled with cakey sweets and Sublime donuts), along with stainless steel counters, wooden bar and muted green walls the entire setting works. 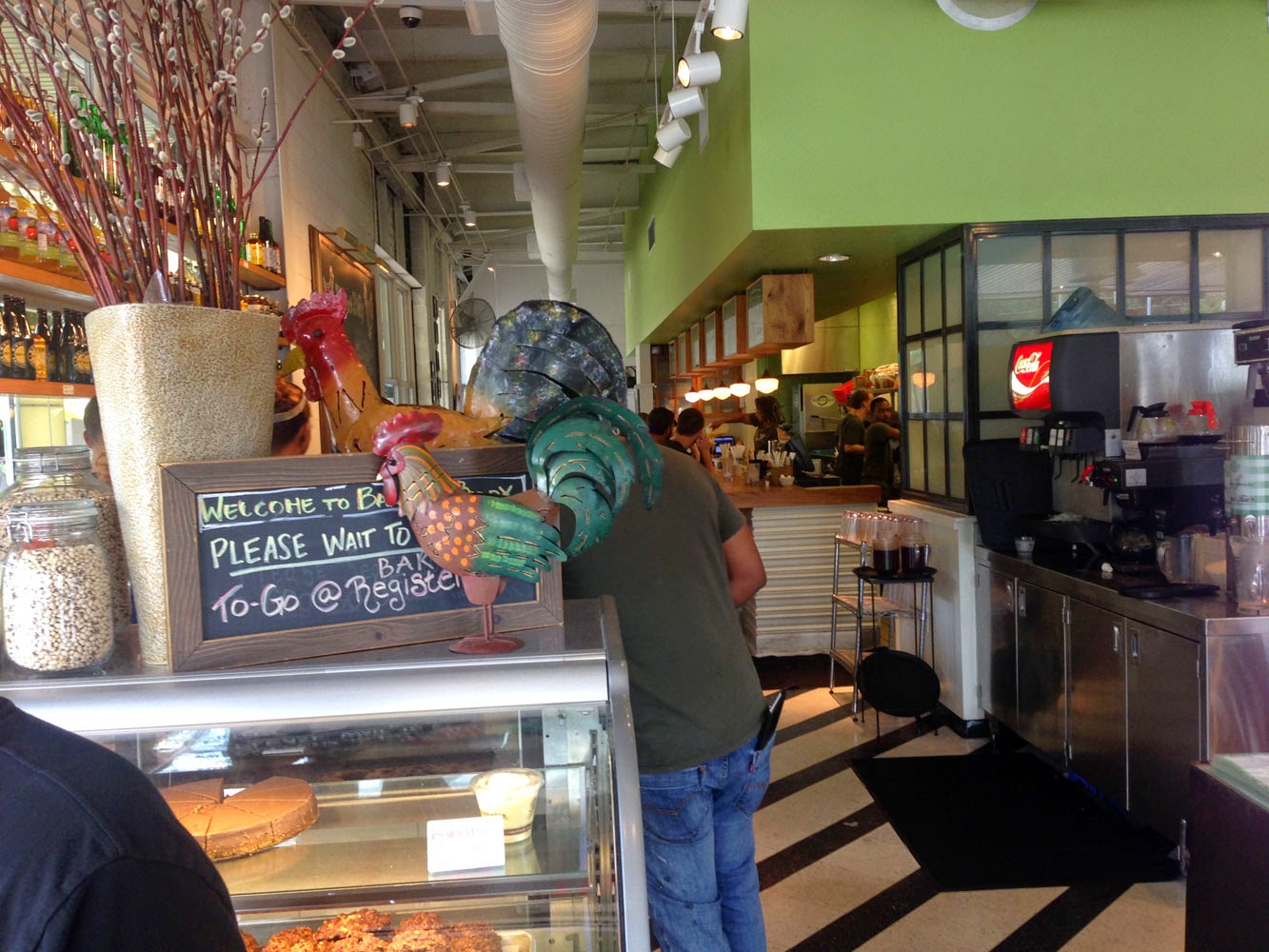 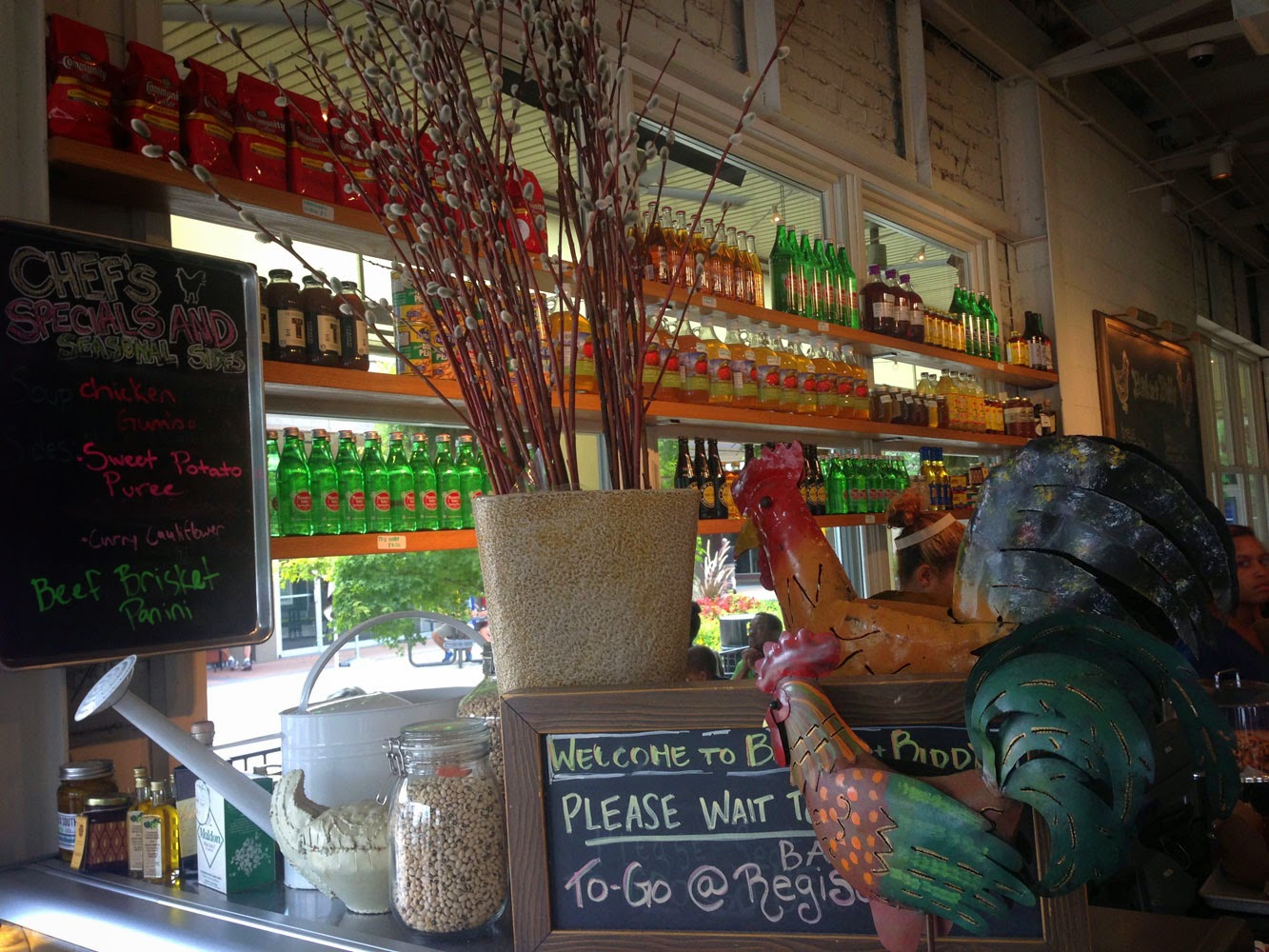 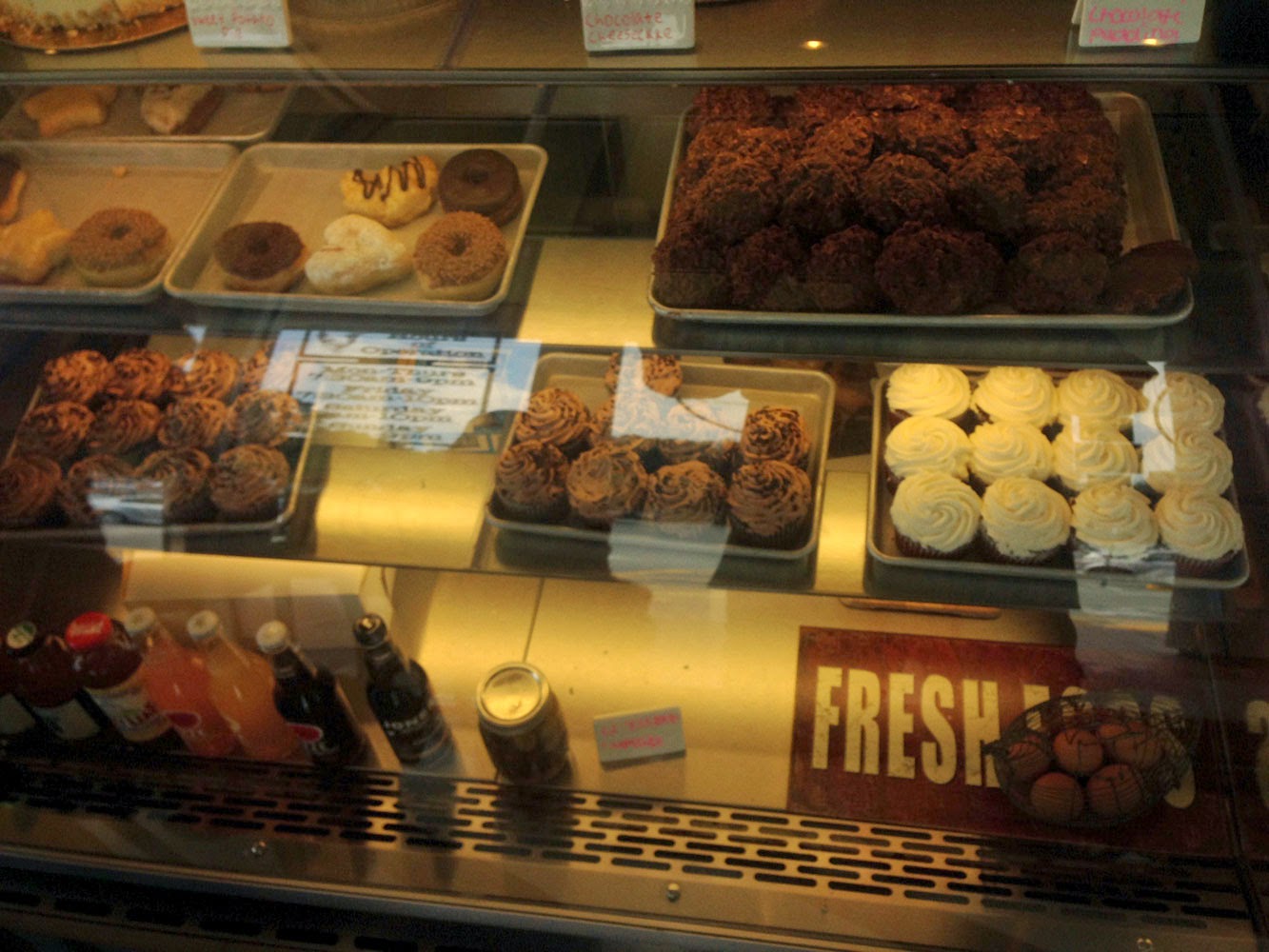 We arrived with some friends for the first time on a Sunday about 1:00 PM - just in time to take advantage of an above-average "Biddy Mary" - basically their own version of the Bloody Mary (I had mine spiced up). Actually I should first state that when we arrived we had to wait about 30 minutes for a table - about at the limit of my patience for any restaurant - the restaurant was busy but only a small family was ahead of us and they were seated immediately. Once seated we perused the menu and pretty much made our selections - and then waited about another 20 minutes before the bartender realized that no one had come by the table. Odd we thought - the place was busy but not so busy that we should have waited 20 minutes before even being greeted. The bartender took our drink orders and promptly returned with our Bloody Biddies - they were quite delicious with an emphasis on the acid (lemon I think?) and the perfect accompaniment to breakfast fare. 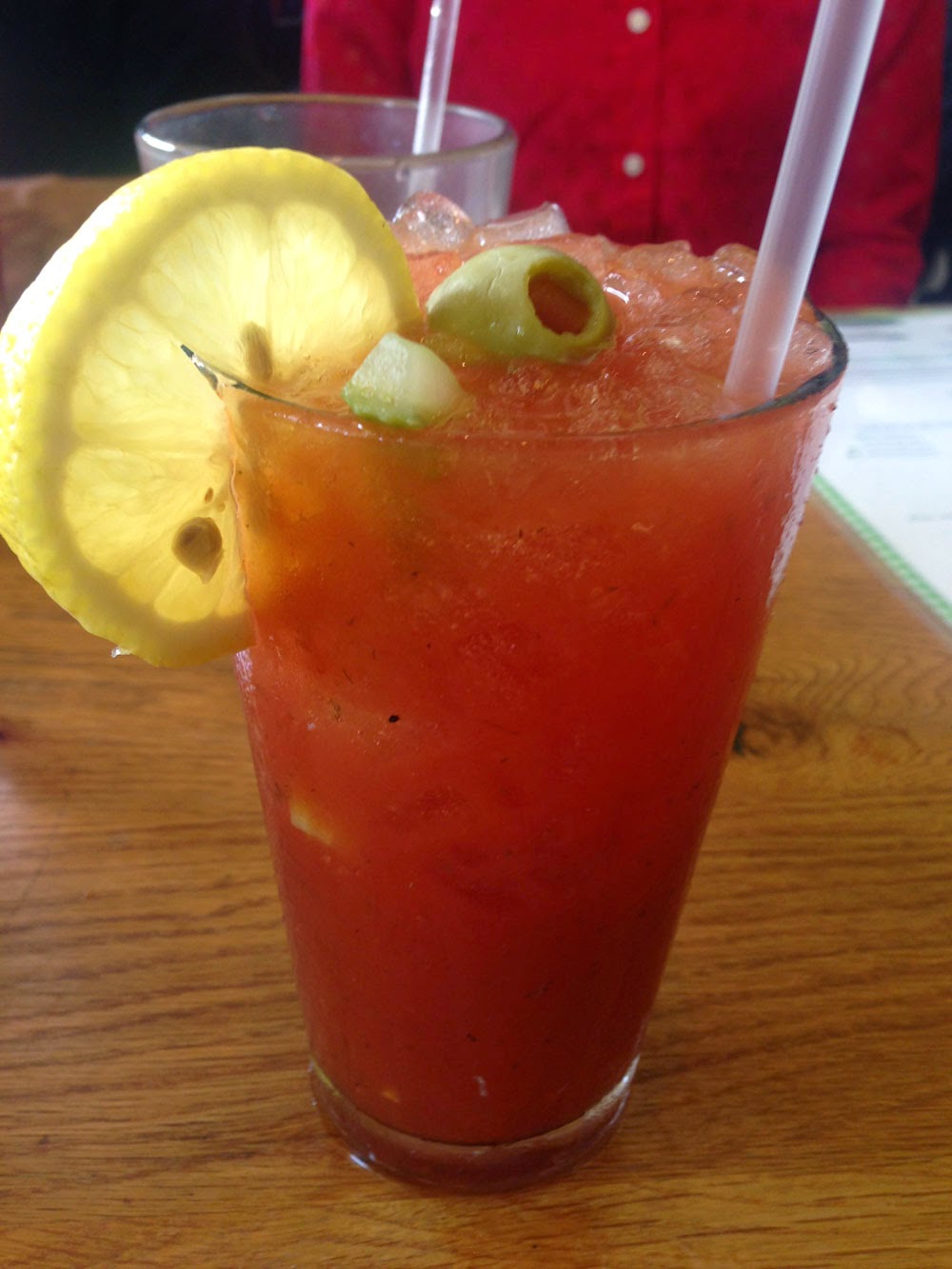 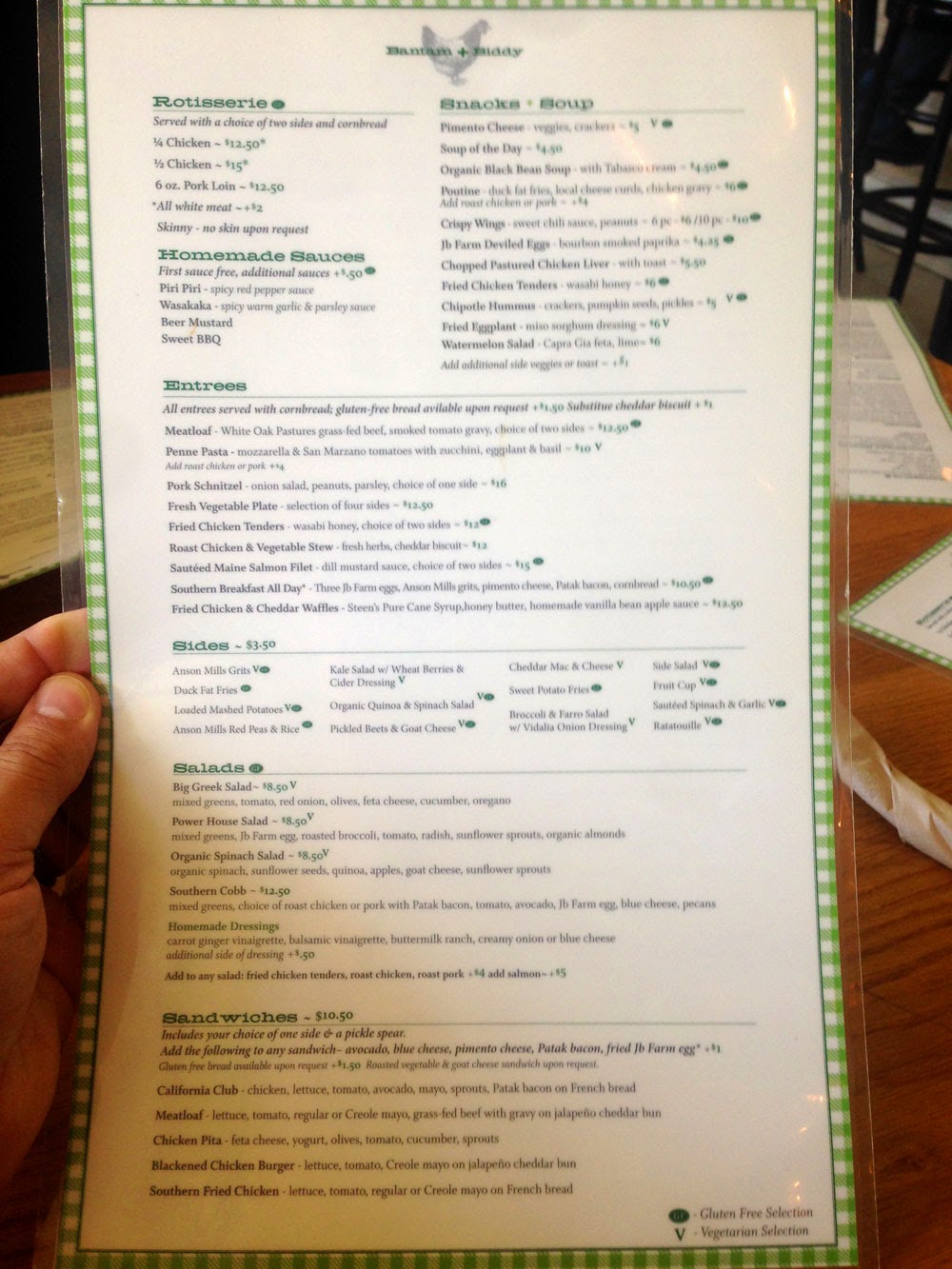 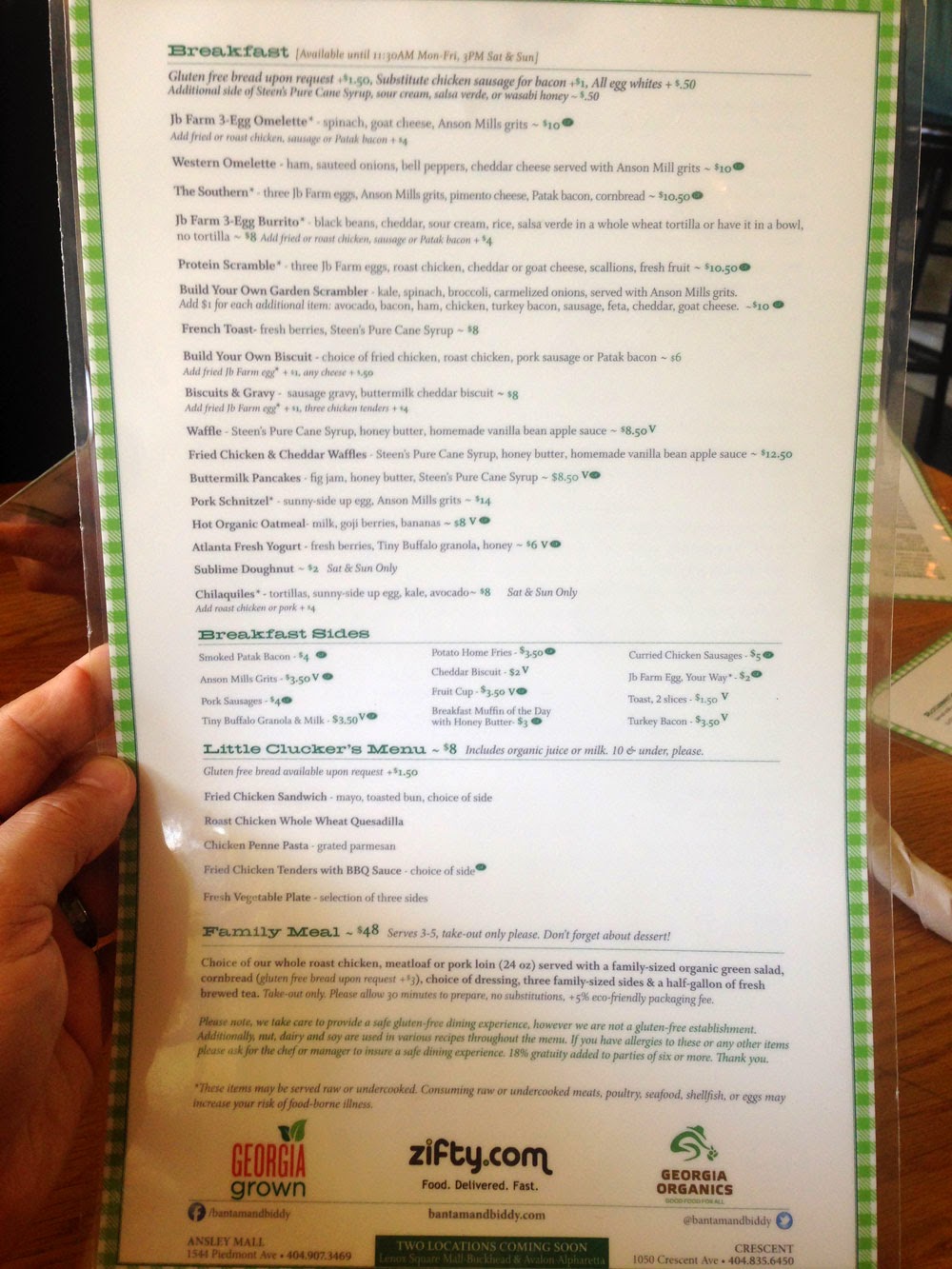 Another 10 minutes went by before our server came by - seems he was just asked to pick up our table - he admitted that this was his first brunch shift, working nights only previously. We decided to give him a bit of slack - after taking our order it was around another 25 minutes before our food hit the table and of course, one was wrong and had to be sent back. Fortunately the omelette-that-should-have-been was quick to produce and hit the table before everyone was finished eating (although I think I was into my last bite of chicken/waffle).

For food, we ordered the following:

Fried Chicken & Cheddar Waffles - these were really delicious and the cheesiness of the waffles were a fantastic contrast to the fried chicken. The "Steen's Pure Cane Syrup" was more like honey than syrup, accompanied with the honey butter made everything oh-so-good! There was a bit of homemade vanilla bean apple sauce on the waffle but not really needed. I did get a biscuit which I'm not sure I should have gotten - it was very huge and above expectations. 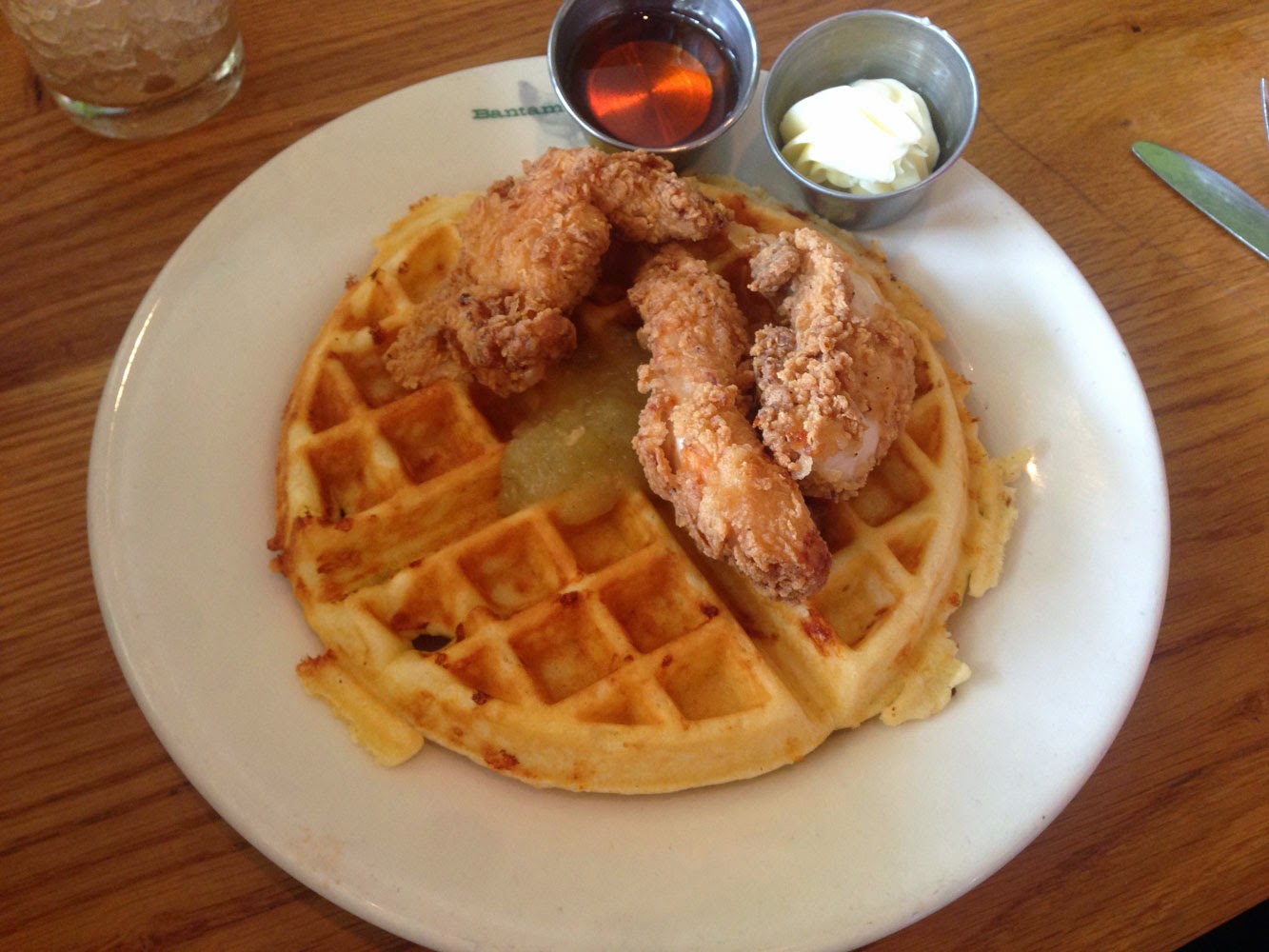 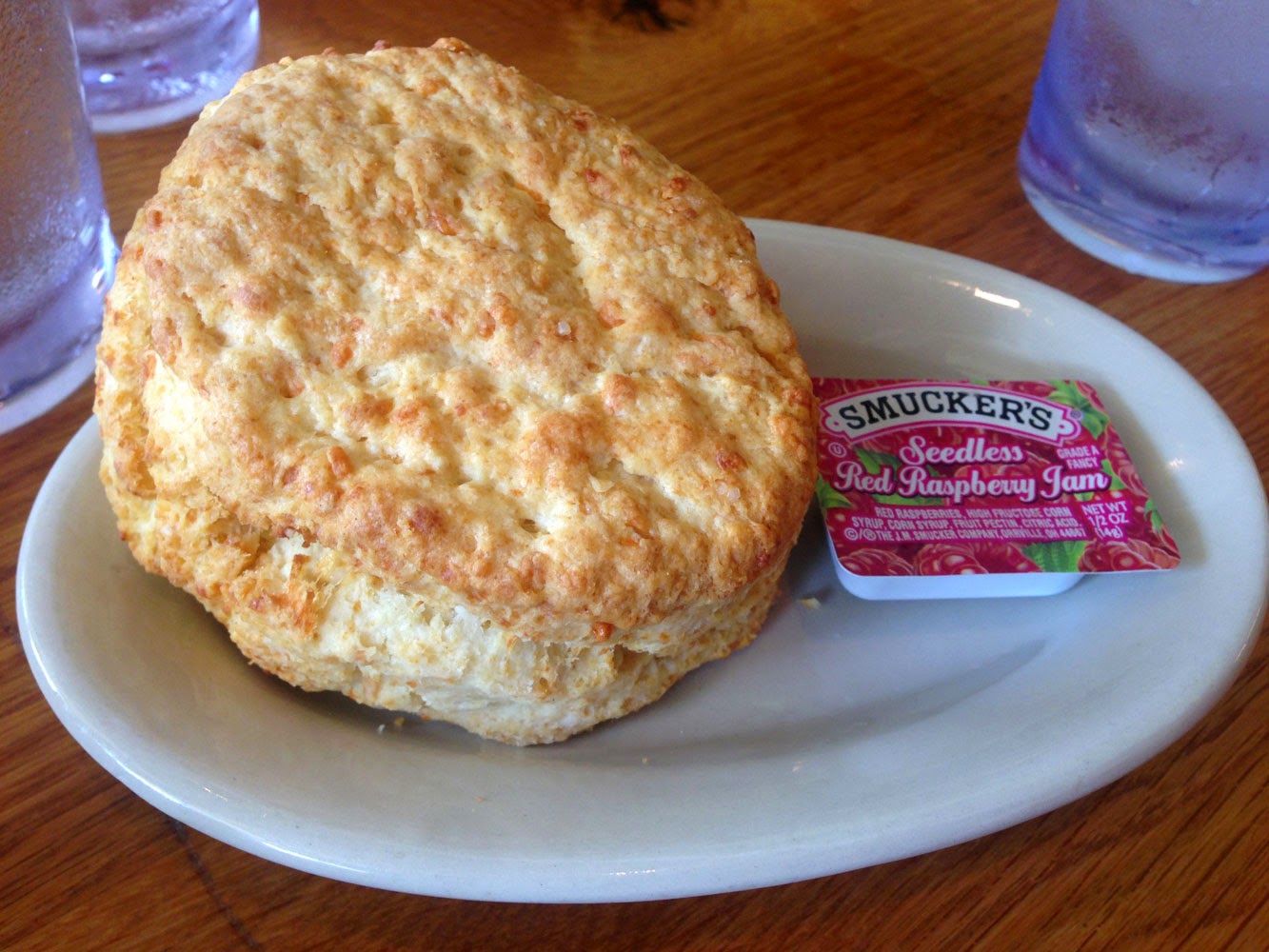 Jb Farm 3-Egg Omelette - this was the missing food and comprised of spinach, goat cheese and some really delicious Anson Mill grits (not the best I've had but better than Awfulhouse). Actually I've been on a quest for the best grits and have found some really good ones in some interesting places. 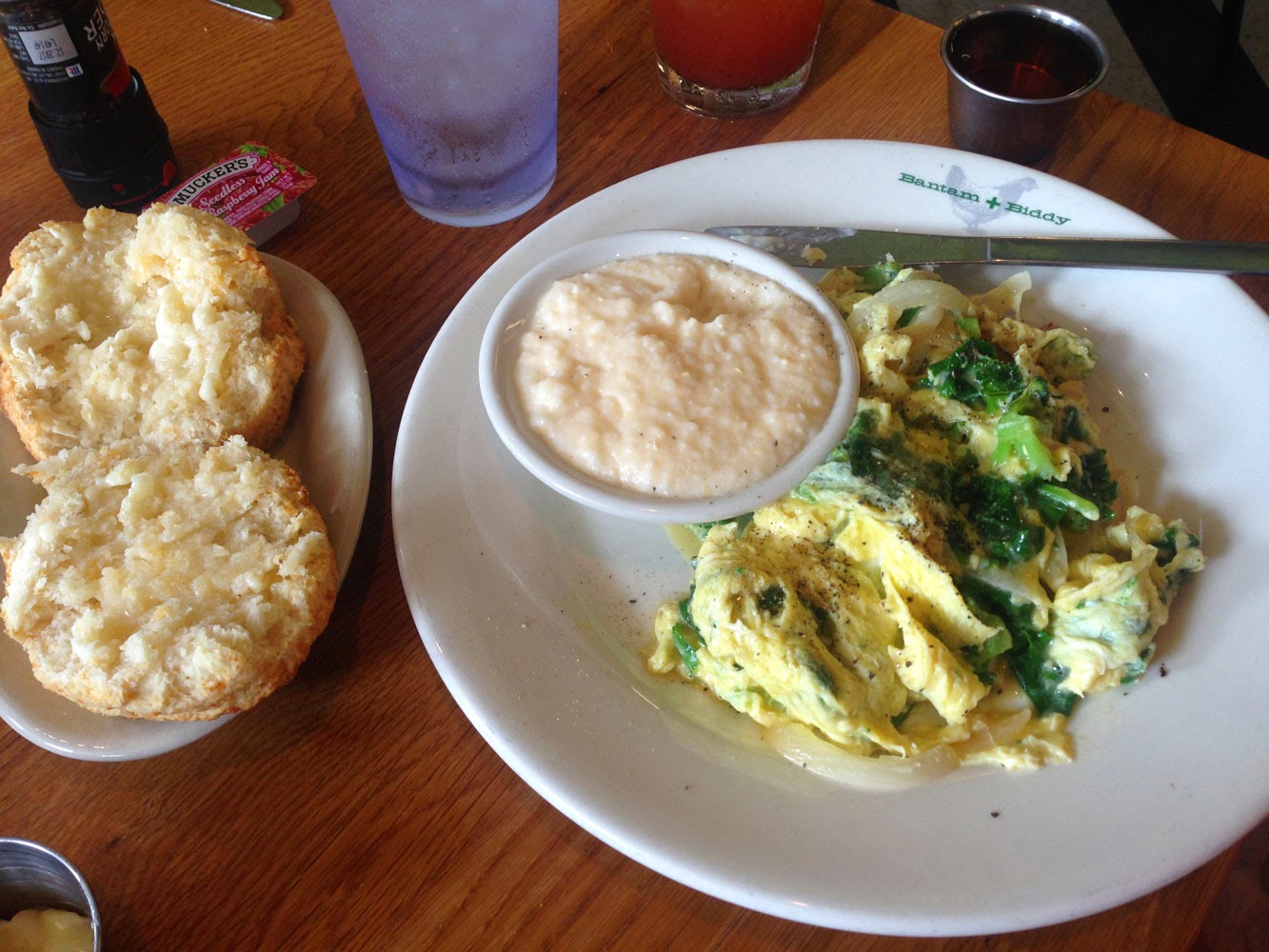 Biscuits & Gravy - Two buttermilk cheddar biscuits - of the humungous variety, these came with sausage gravy and had both an egg side and a side of Patak bacon added. Patak does a fantastic job on their smoked items and the bacon is well worth ordering - salty, smoky and mouthwatering. 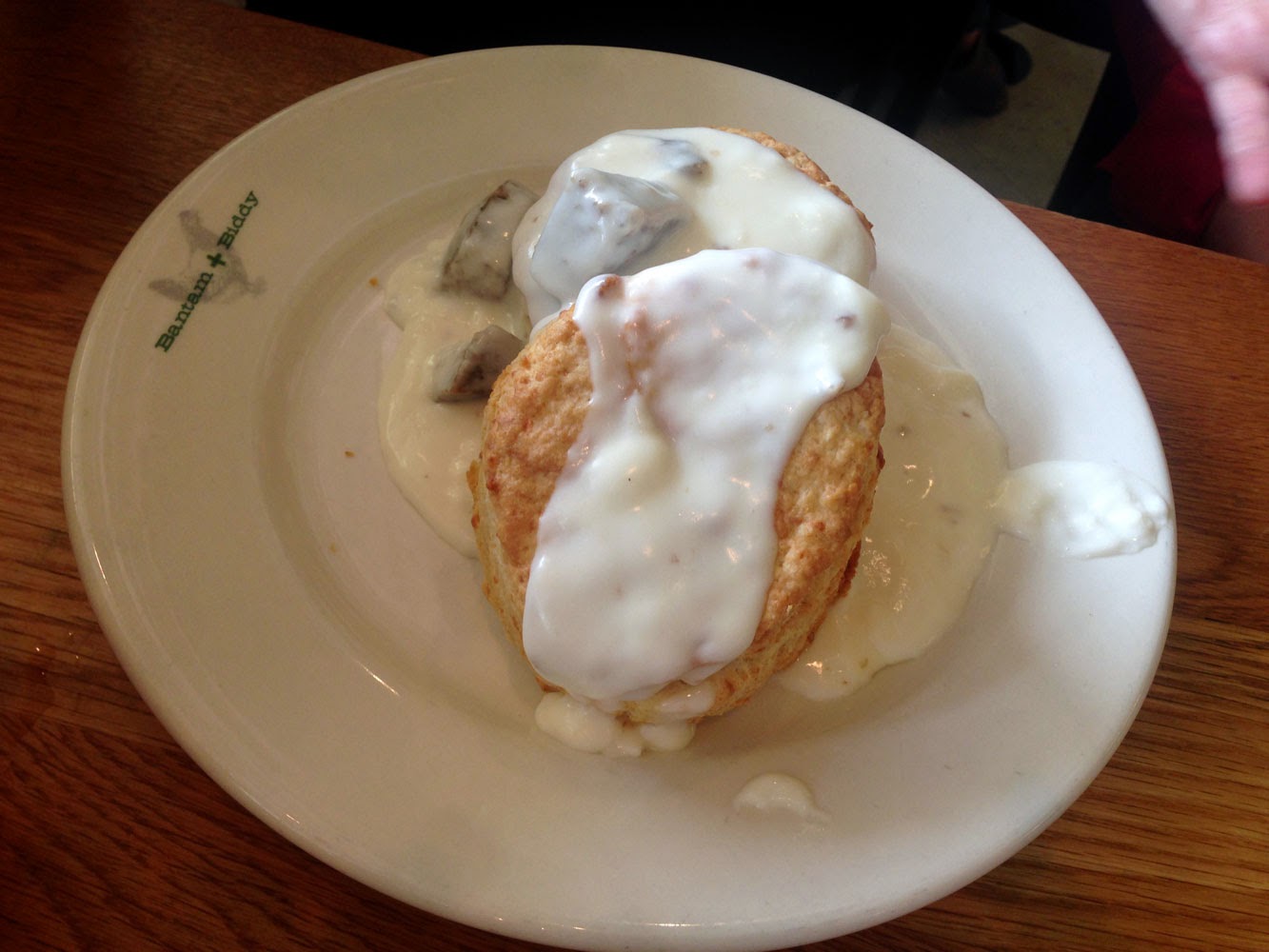 Chilaquiles - this Mex-inspired dish came with fried tortilla wedges, kale, avocado and a sunny-side up egg; with chicken added. This reminded me a bit of a burrito bowl with an egg, just to call it breakfast. 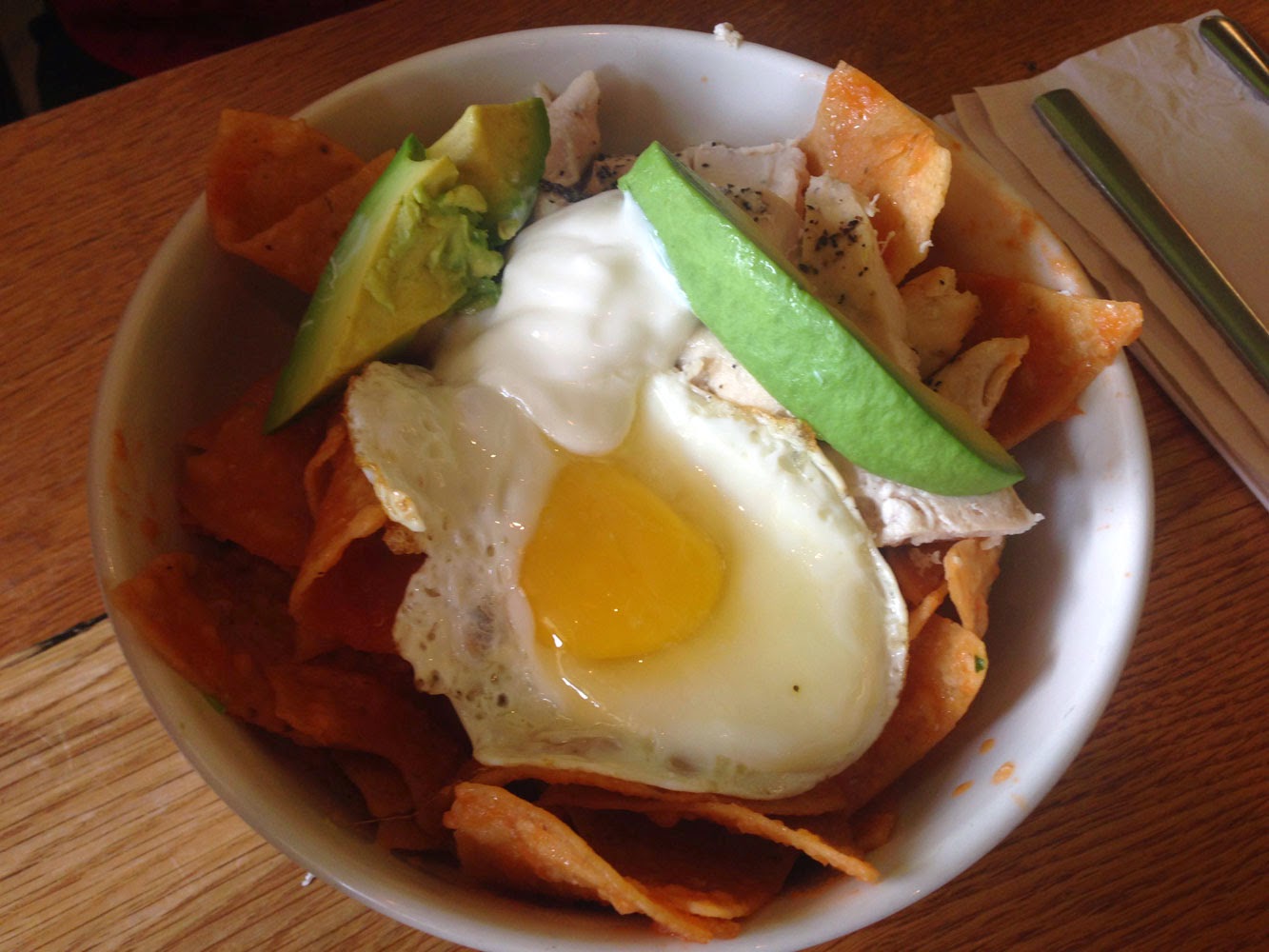 Completing the food and a second round of Biddies, we asked for the check - the prices here were higher than what you normally pay for breakfast but considering the cocktails it was about on par with the Flying Biscuit. Of course it would have been nice to not be charged for the extra entree (remember the one we got the first time that was wrong?). In any case, the check was quickly corrected. It was interesting that there wasn't much of an apology - only the "this is my first brunch shift" statement several times. 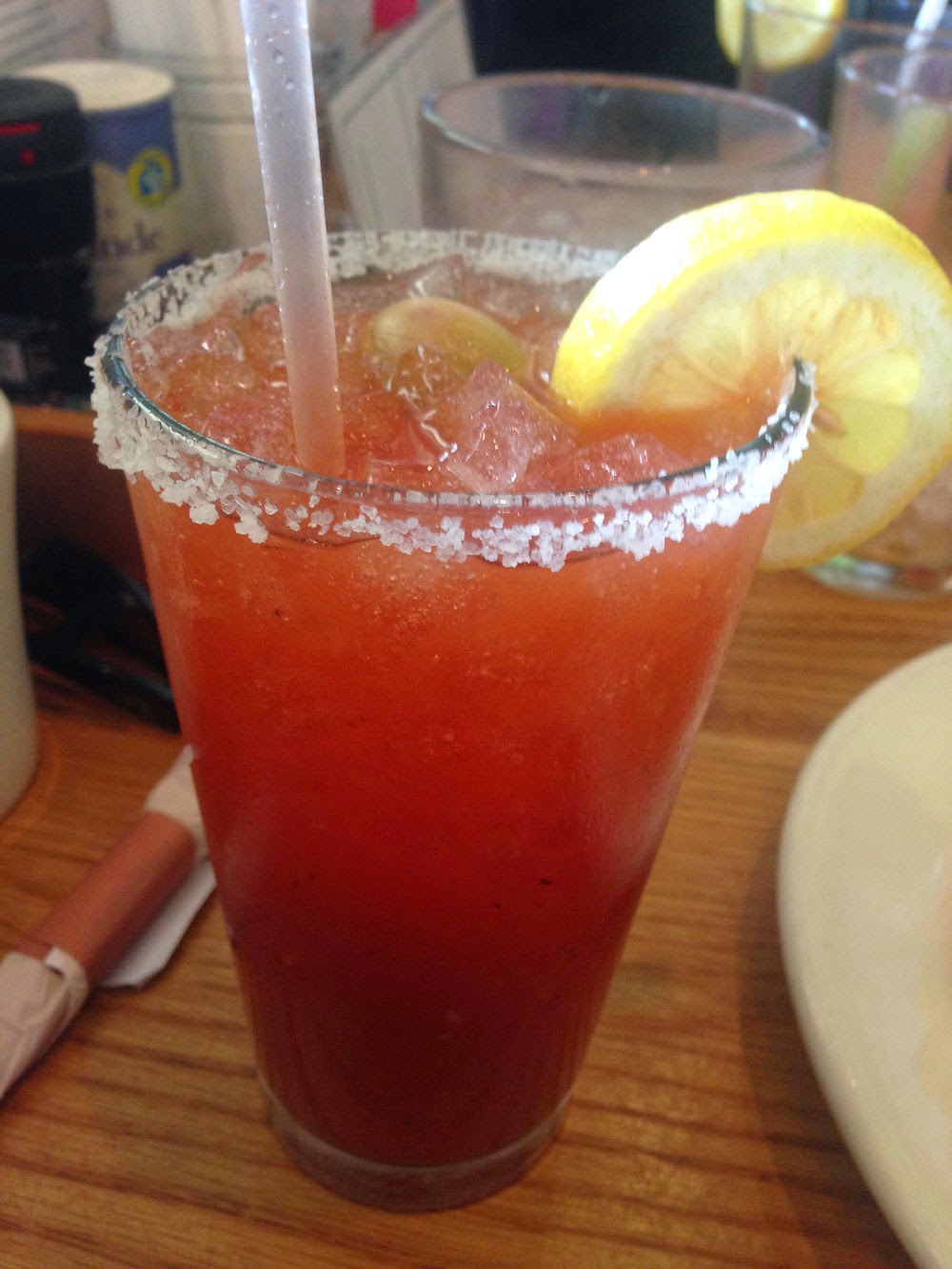 In general I thought the food very good - above average and better than Flying Biscuit for the most part. The combinations worked well and the flavors were spot-on. The service was a bit iffy but I don't blame the server (other than the excuses) - however having to sit for so long without being greeted has me disqualifying them of a star - call this one 3 stars rather than 4. It really surprised us that with so many things less-than-par in our experience, that a manager didn't come by, first to check on us and second to "throw us a bone" - when I was at Indigo we would typically either comp one of the entries (like the one that was messed up) or at minimum buy the table a dessert to share. That's just good business - I wish Bantam + Biddy well and hope they read this review.