(a much shorter review also posted on Yelp)
This was my first visit to the Sun Dial Restaurant - I actually wasn't aware that there are two rotating restaurants in Atlanta - I knew about the recently opened Polaris atop the Hyatt and actually ate there with some friends during Fantasy Fair in the late 80's (this was a pre-cursor to the mega-show Dragon*Con) prior to the restaurant's closing (the Polaris went through a period of empty disrepair prior to being completely remodeled and reopened in late 2013). The Polaris is the flying-saucer-shaped out-building you see from the street and is an original Atlanta landmark, designed by John Portman and Associates (who also designed much of the modernist architecture in downtown Atlanta). The Sun Dial, on the other hand, is integrated into the cylindrical tower of the Westin Peachtree Plaza - a much taller structure (the restaurant elevator says 79th floor). Eating at the Sundial is more about the experience than about the food.


To provide a bit of lead-in, for the past several weeks we've had a visitor at work from a team member who normally resides in Bangalore, India - his name is John. He left today (July 4th, 2014) and as with all our visitors, our local team tries to provide a bit of entertainment and sight-seeing while they are away from their friends and family back home. As John's birthday fell on a Sunday during his visit, Sidd (who you'll see in many of my photos as he's also a constant dining companion and on my team at work - also a great friend) and I decided to take John to brunch downtown and show him areas he hadn't yet visited or seen (he already did most of the touristy things to do, like Centennial Park, World of Coke and the Georgia Aquarium). For his birthday, we took him to brunch at the Sundial and I showed him around downtown (particularly two of our spectacular hotels, the Marriott Marquis and the Hyatt with their spectacular atriums) - we then hopped on a train and headed to my old neighborhood, Little Five Points - I think John had quite a bit of fun and got to see parts of Atlanta that most visitors never see.


Sundial Restaurant Brunch - Westin Peachtree Plaza
Approaching the Westin from the Peachtree Center Marta Station, you first spot the mirrored cylindrical exterior, then see the block-like structure that faces the street. Most of my interior shots were a bit distracting due to the lighting and lens-flair, so I'll pass on those. As with any Westin Hotel, this is not exception, providing opulence and modernist beauty. On the architectural style, this Westin is almost Brutalist with exposed concrete, giant structural pylons and an open, two-story atrium - you access from the street via a long hall and to access the Sundial, you have to go down a floor (the elevator to the restaurant is restricted to people with reservations). 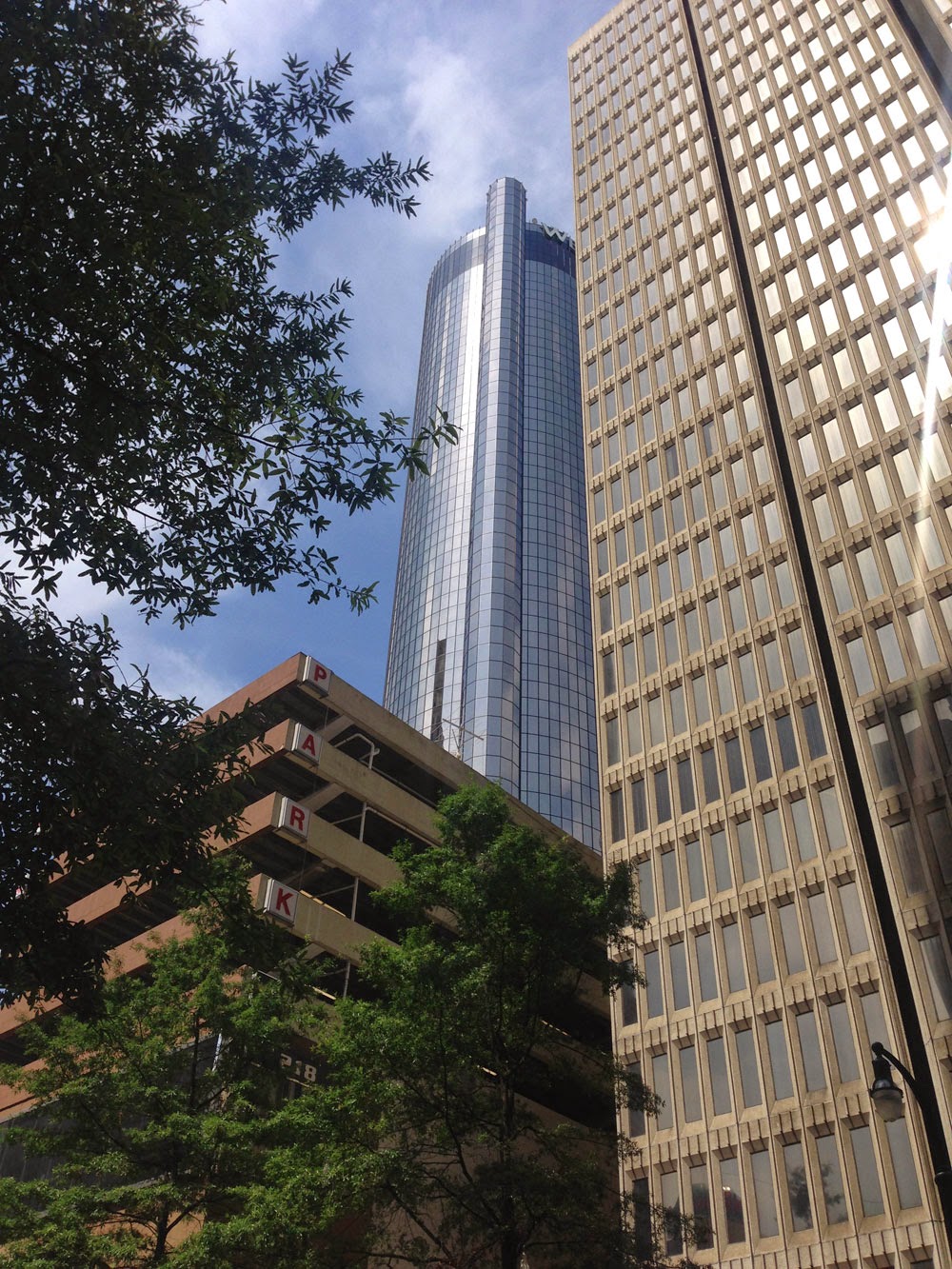 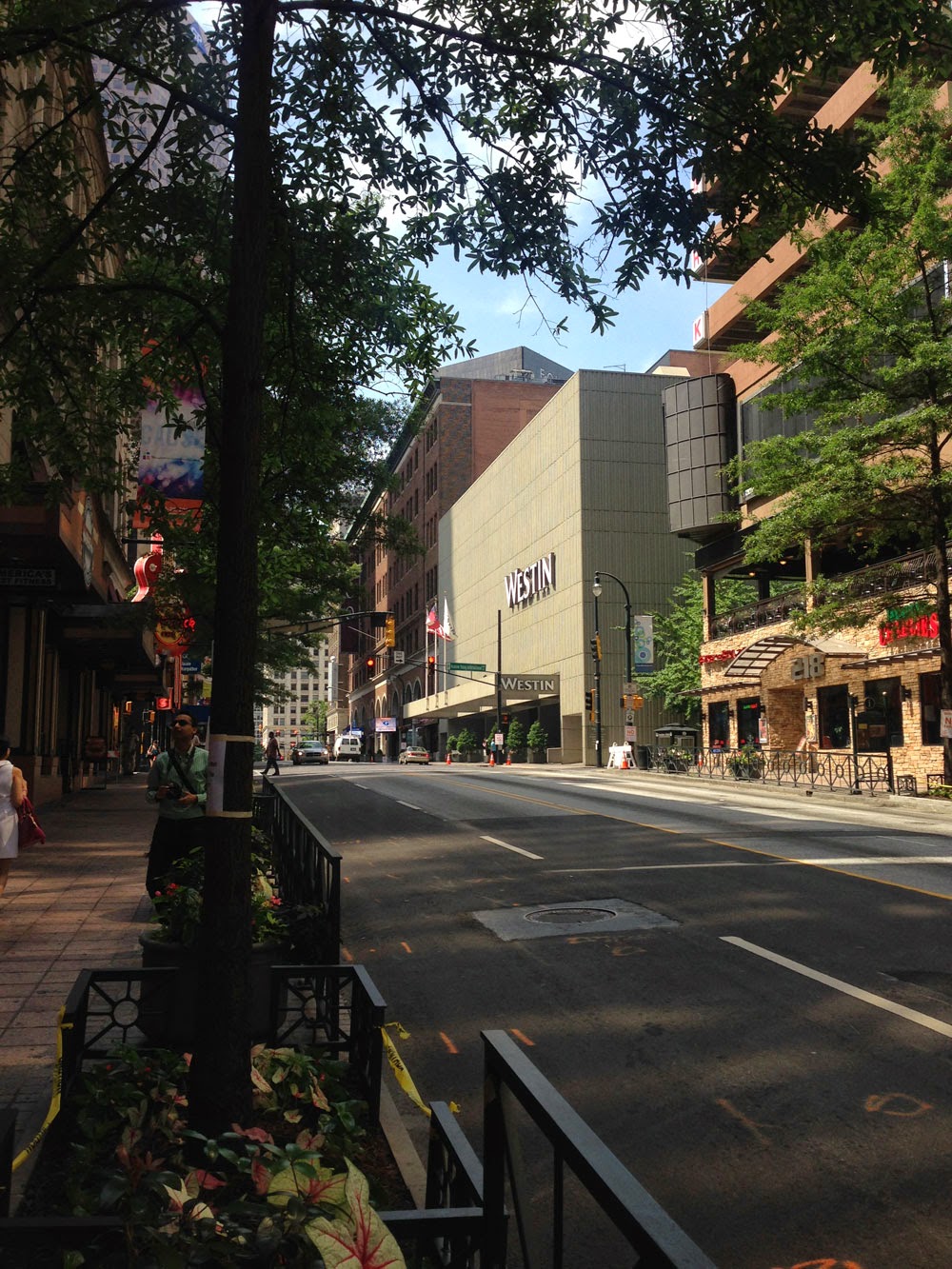 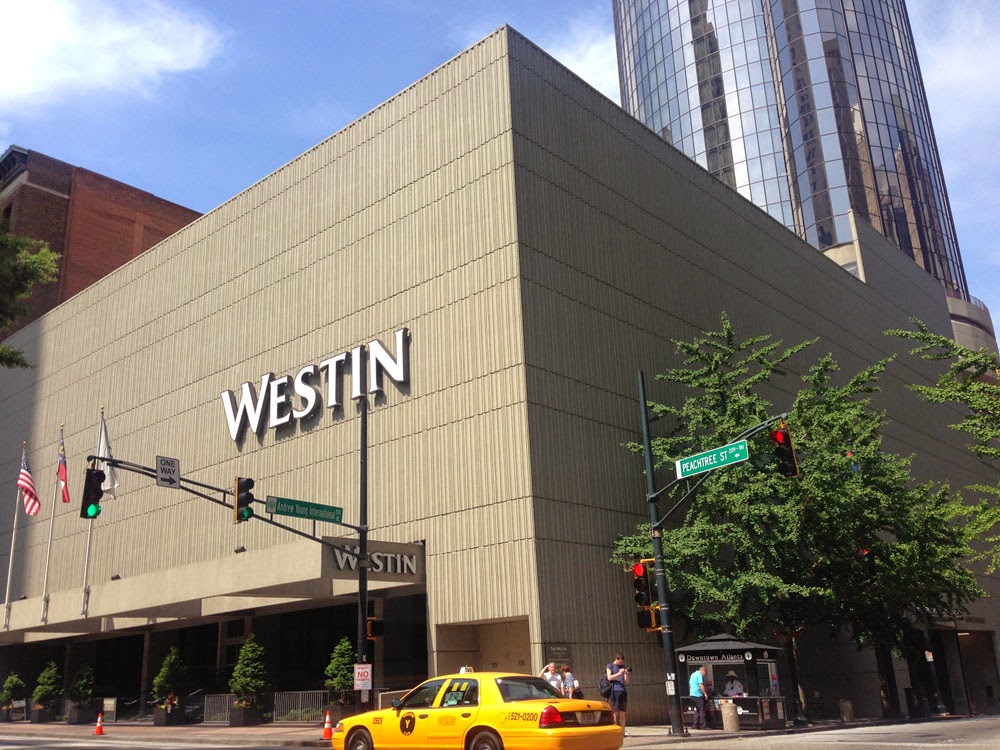 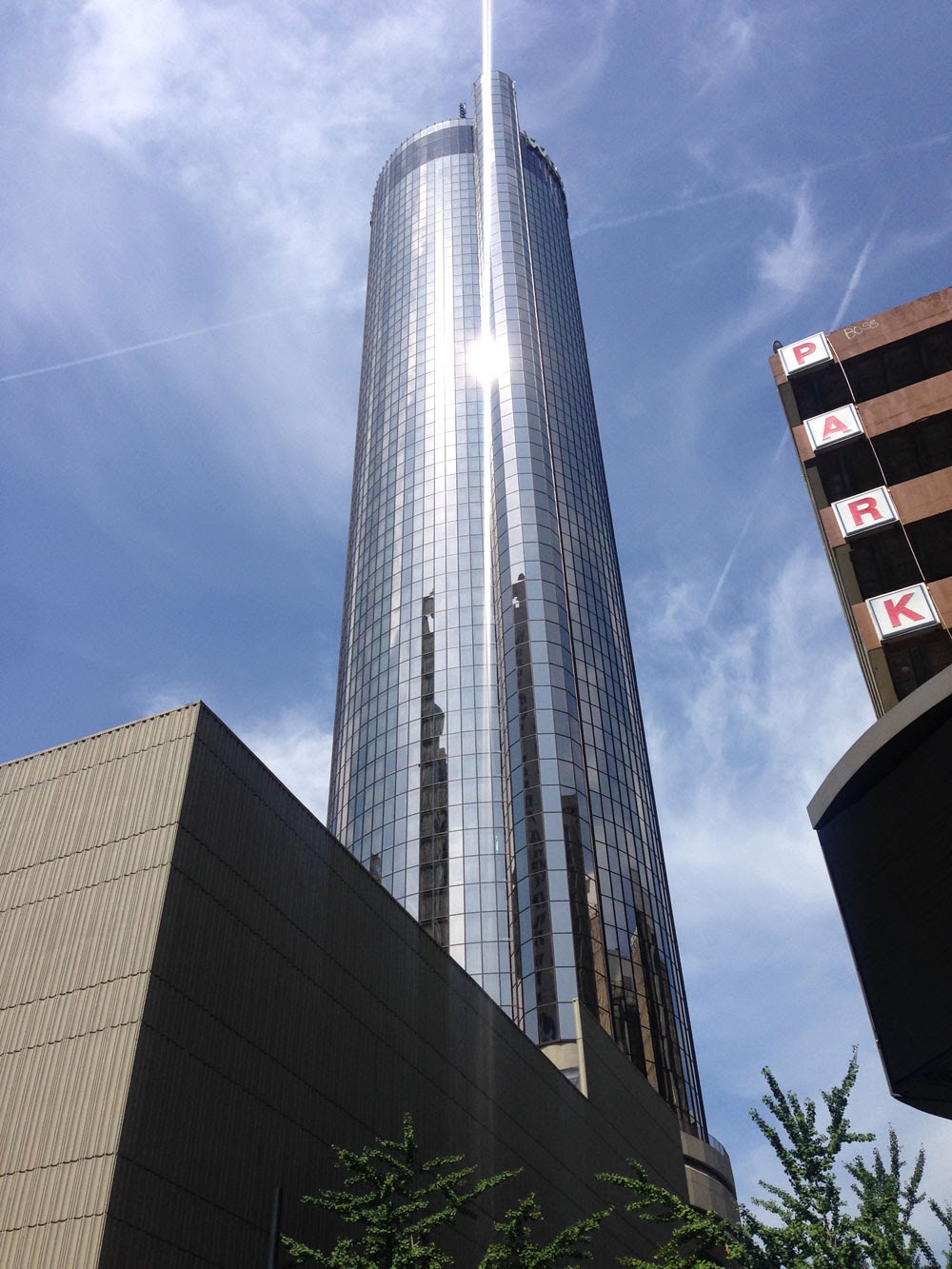 As I've already mentioned, what makes the Sundial so fantastic are all the views - make sure you ride one of the two exterior elevators (unless you have problems with vertigo, and if so why are you going to the Sundial?) - even the views from the elevator are quite spectacular. Once you confirm your reservation you wait for seating on the top, observation deck. This part doesn't move around so you'll be walking on mezzanine-like extensions from the center that provide access to the best views - there are those distant-binocular-type thingies (not sure what they are called), mounted in several areas so you can zoom-in on structures. I believe that the Sundial provides the best views of Atlanta, bar none, and this alone makes the visit worthwhile. With the exception of a short area behind the elevators, you achieve about a 360 degree view of Atlanta with a direct line-of-sight to Stone Mountain to the East and what appears to be Kennesaw Mountain to the North-West. 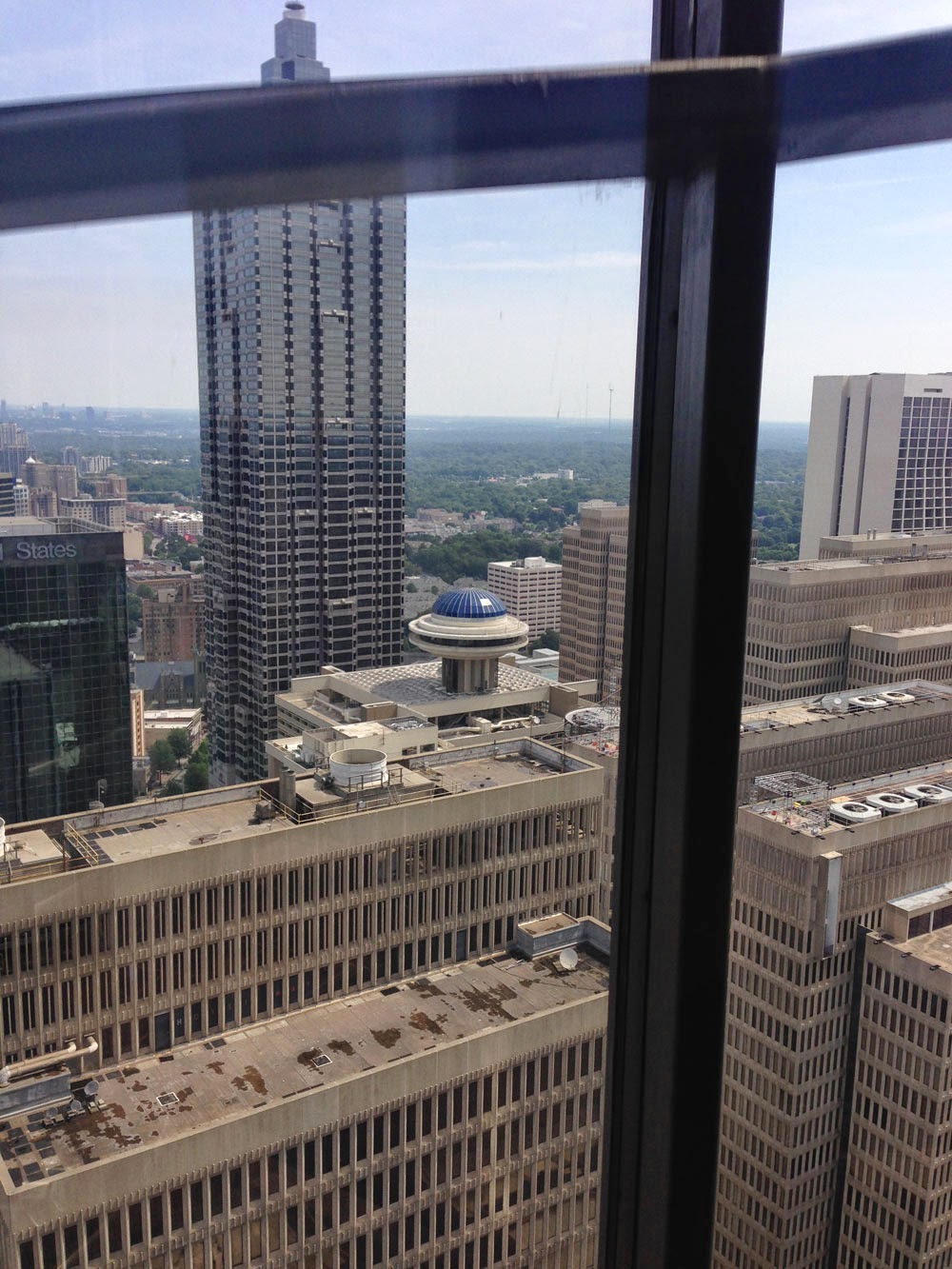 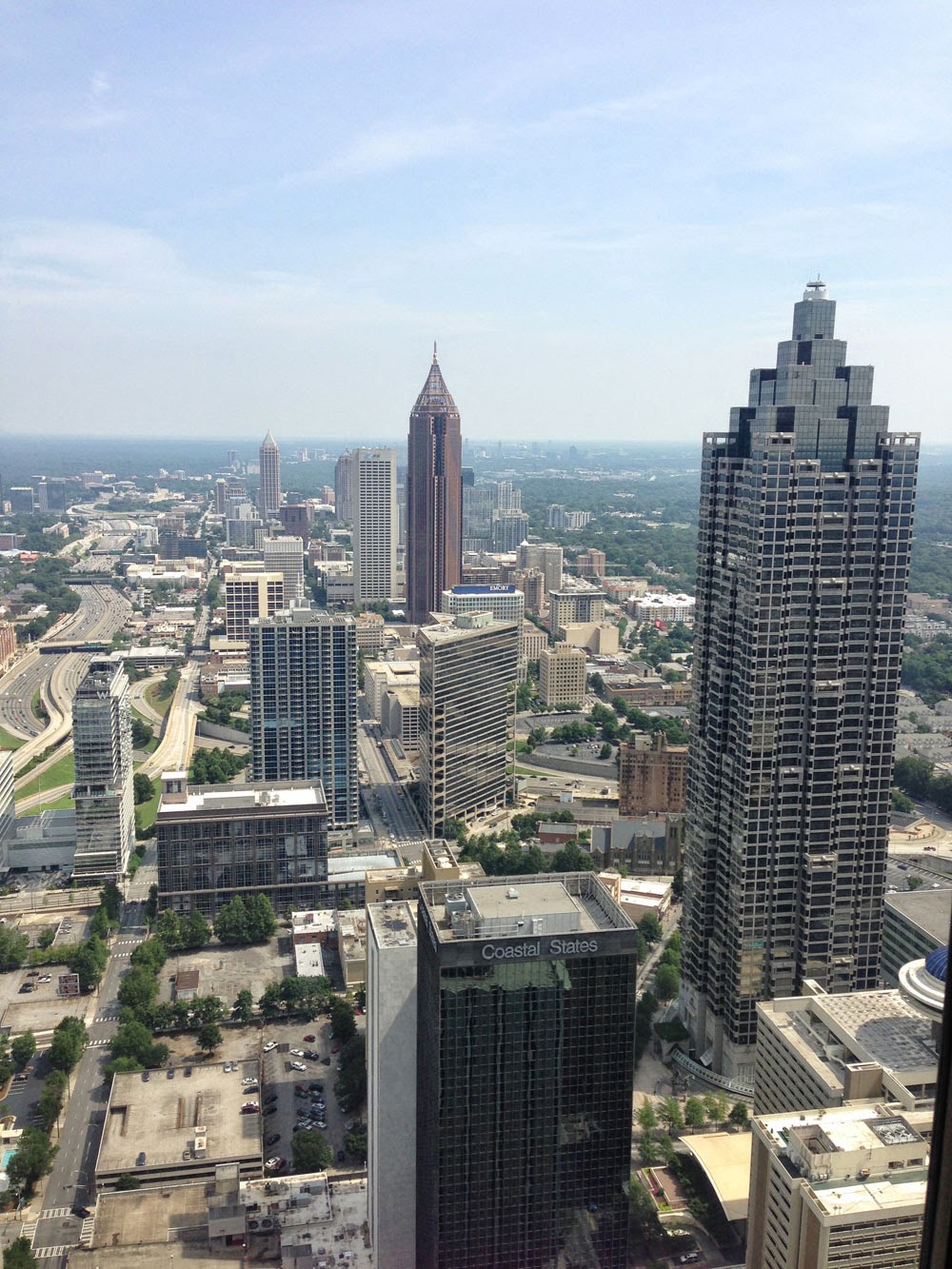 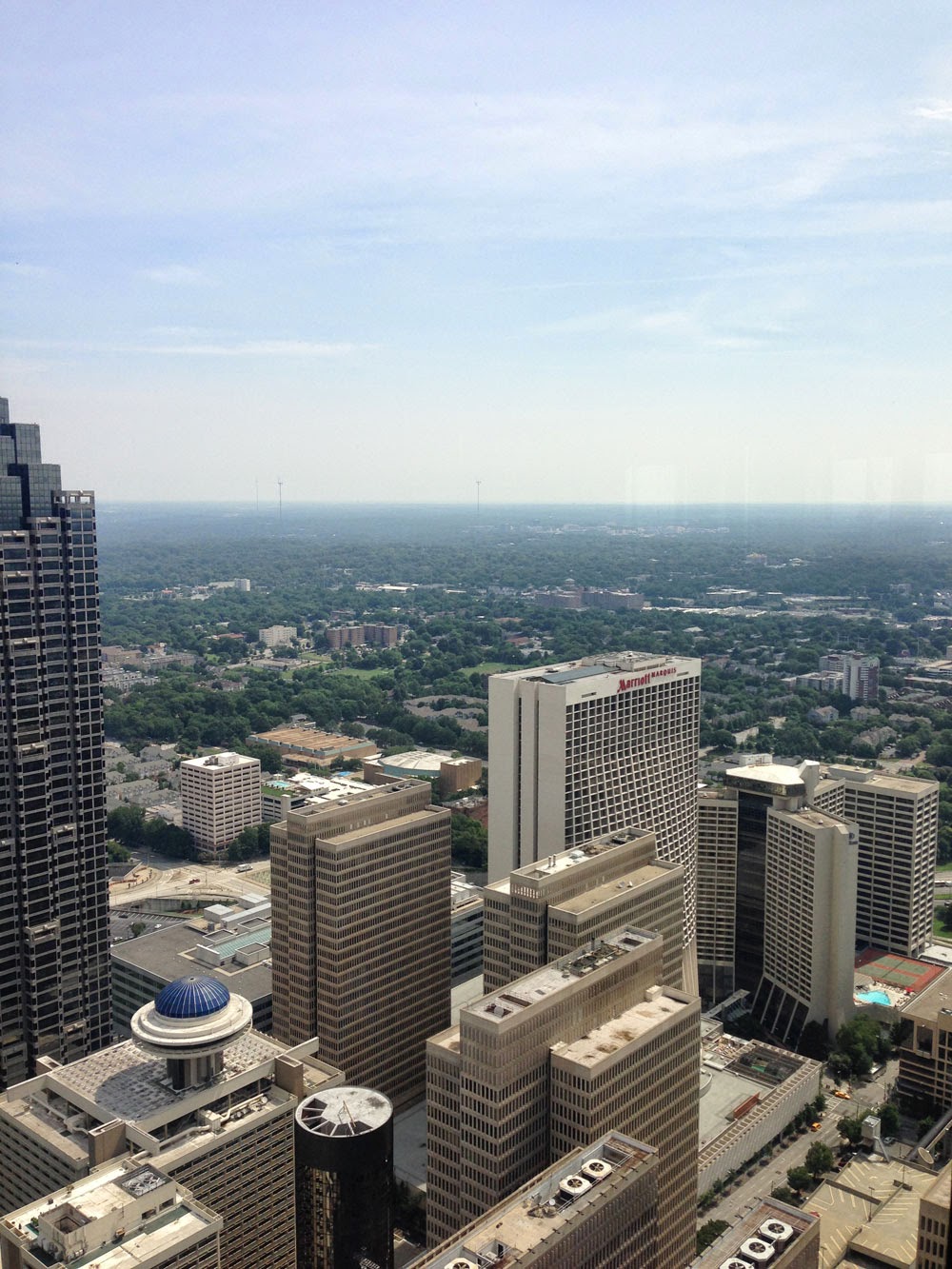 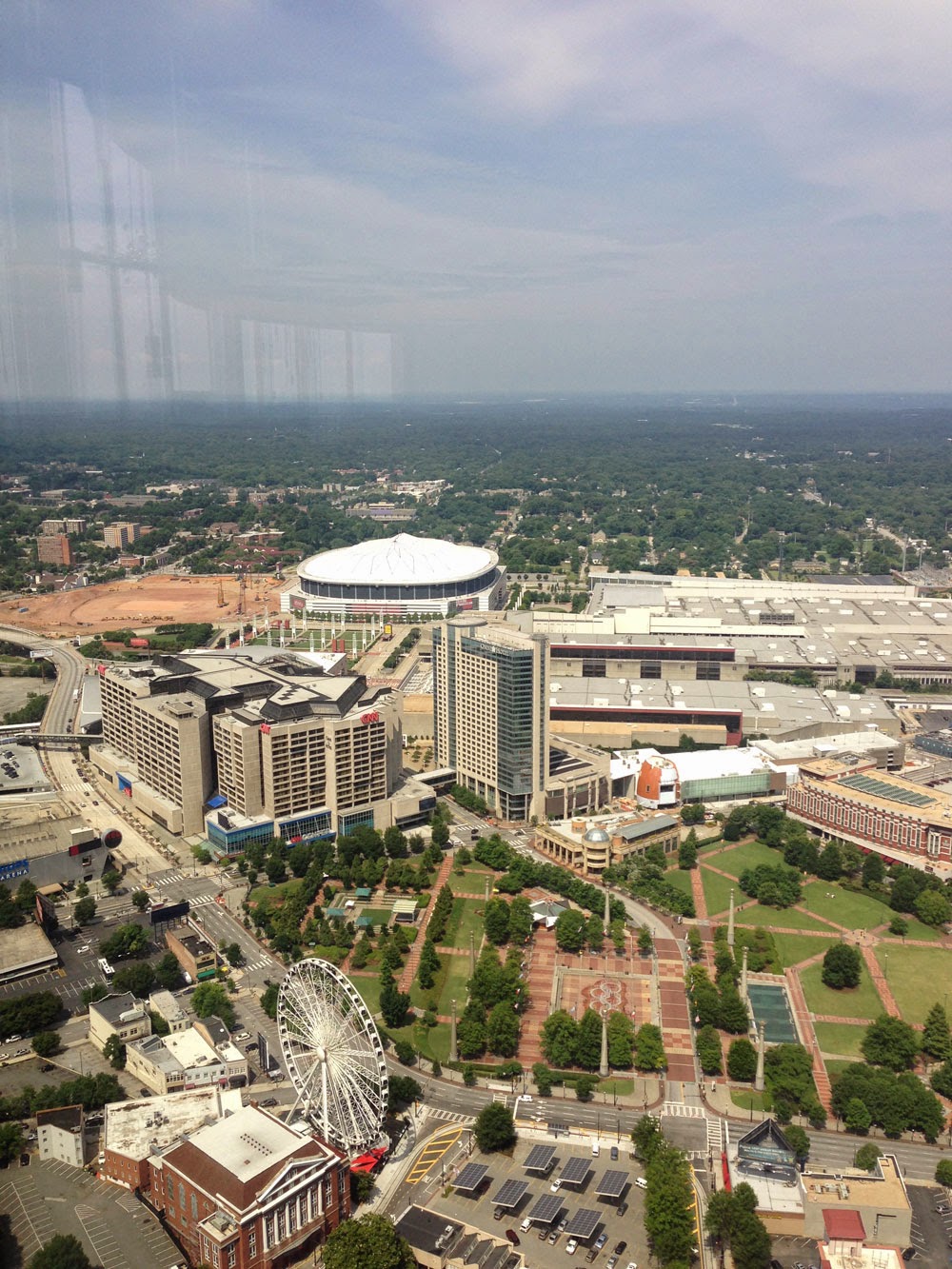 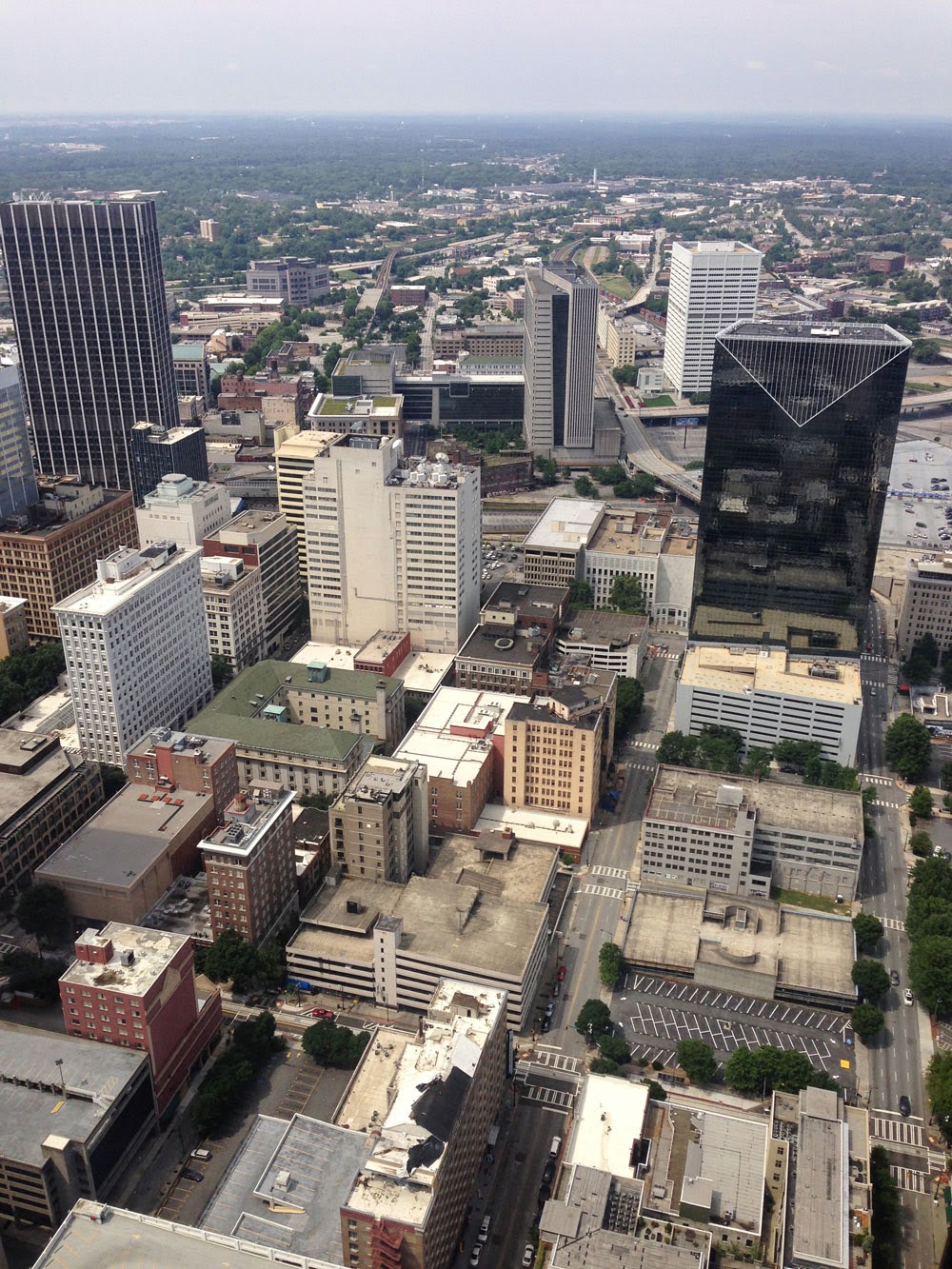 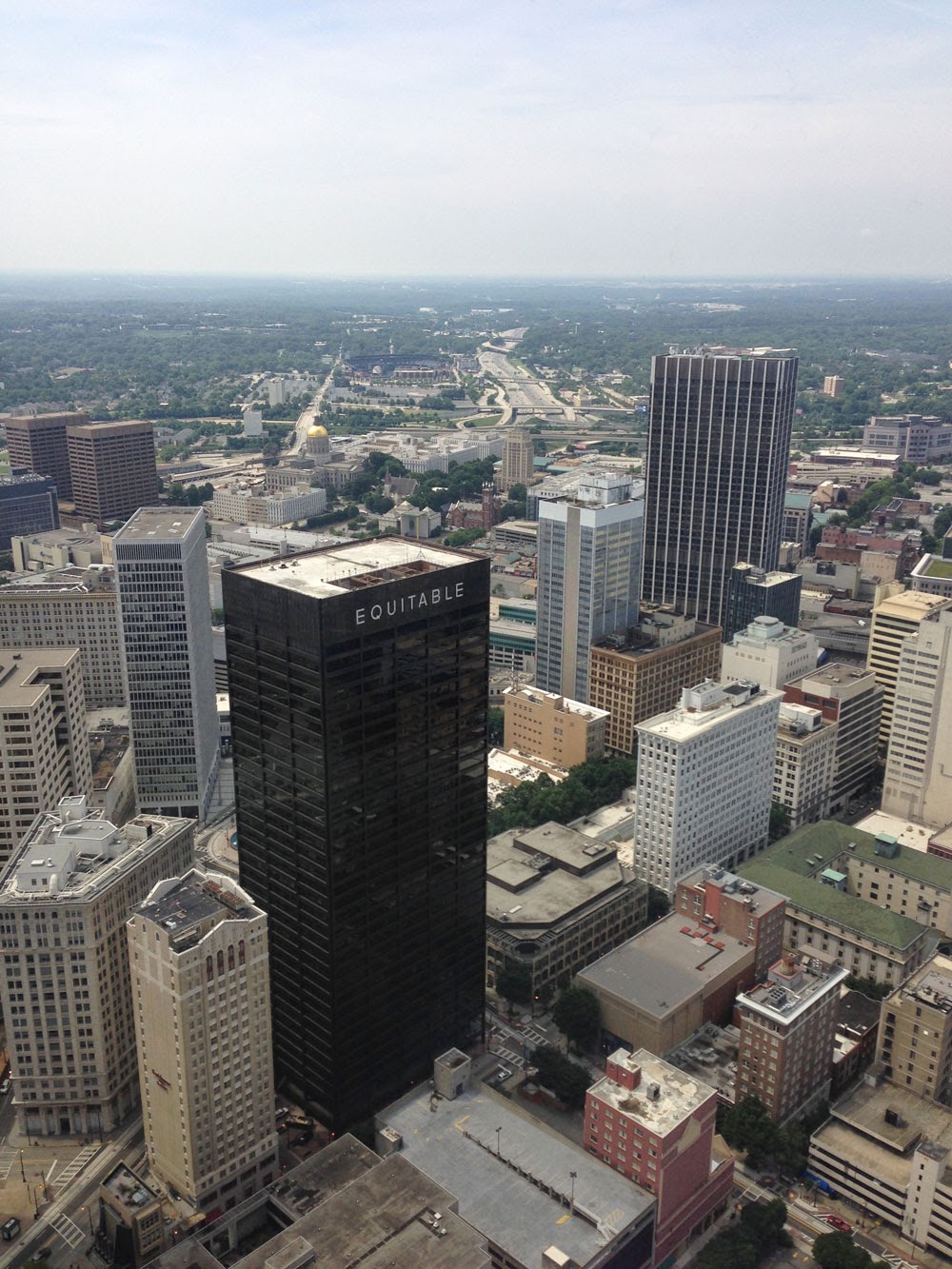 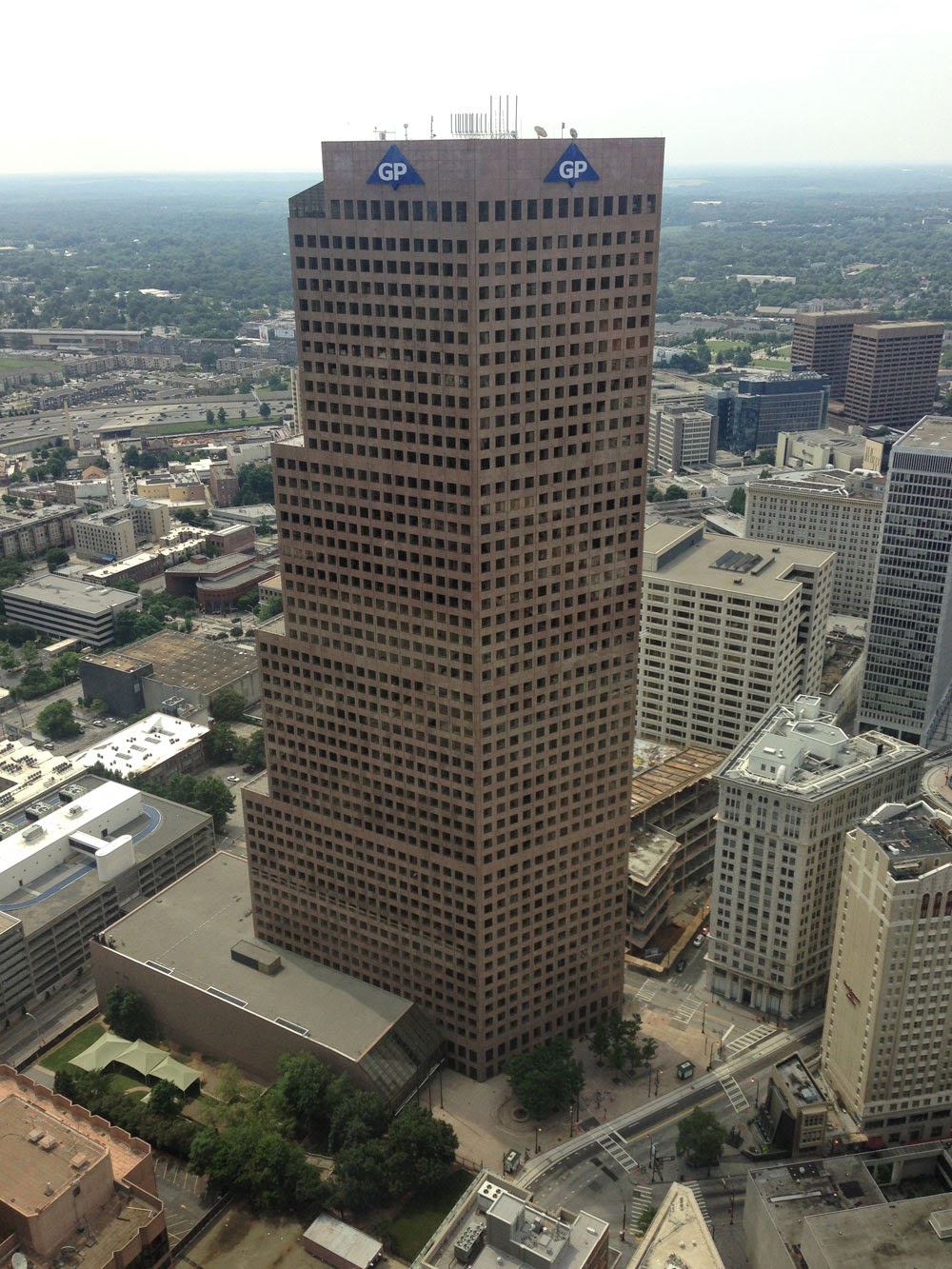 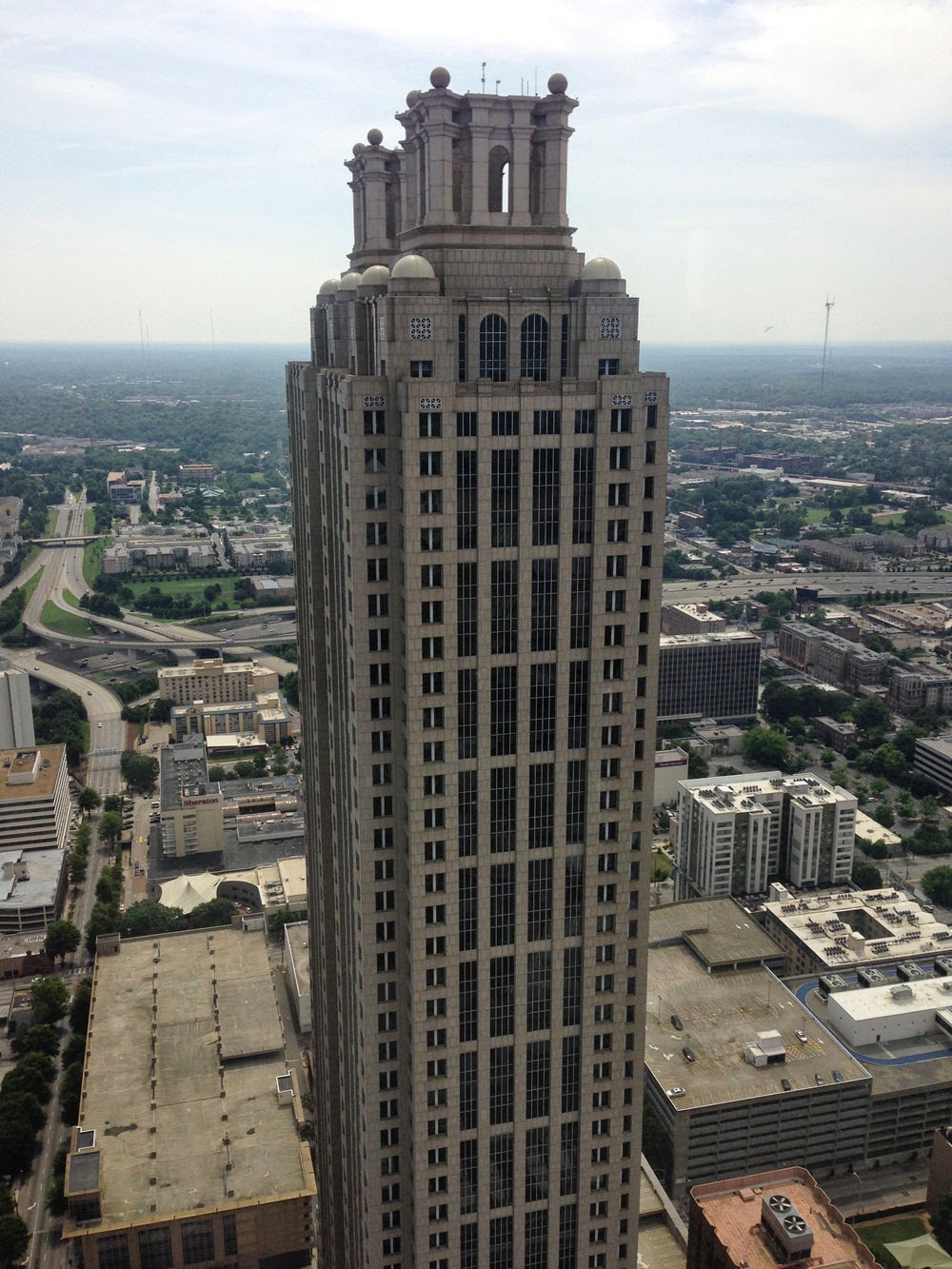 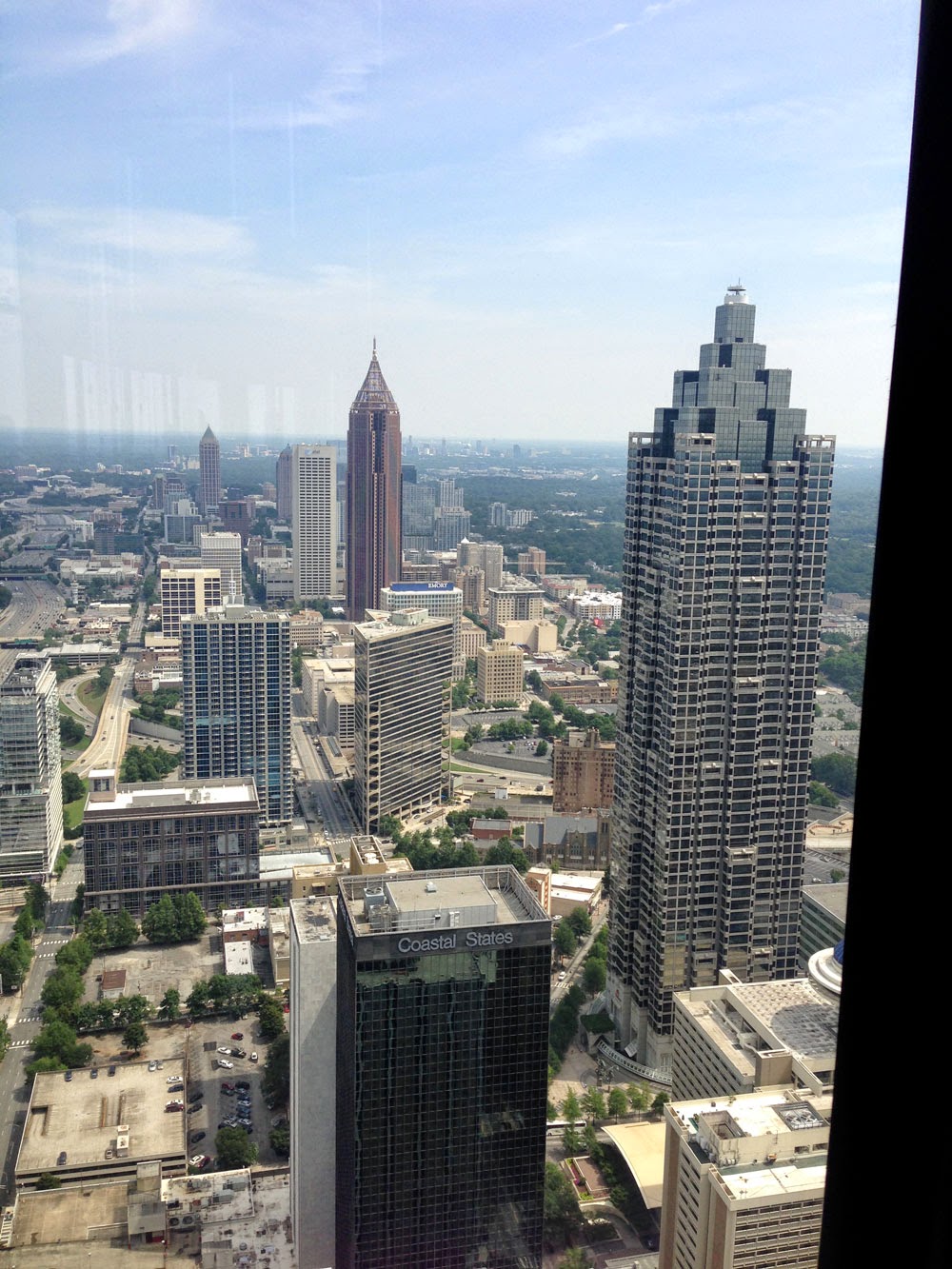 The interior of the restaurant is modernist, curvaceous and full of exterior light. It's hard to see that the dining area is rotating until you sit down at your table - the basic construction is of a giant ring that's right inside the exterior wall, that slowly rotates (I believe you get the 360 degrees over a period of 45 minutes or so). While sitting if you see the wall slide by it can be a little disconcerting, but you get used to it after a few minutes. 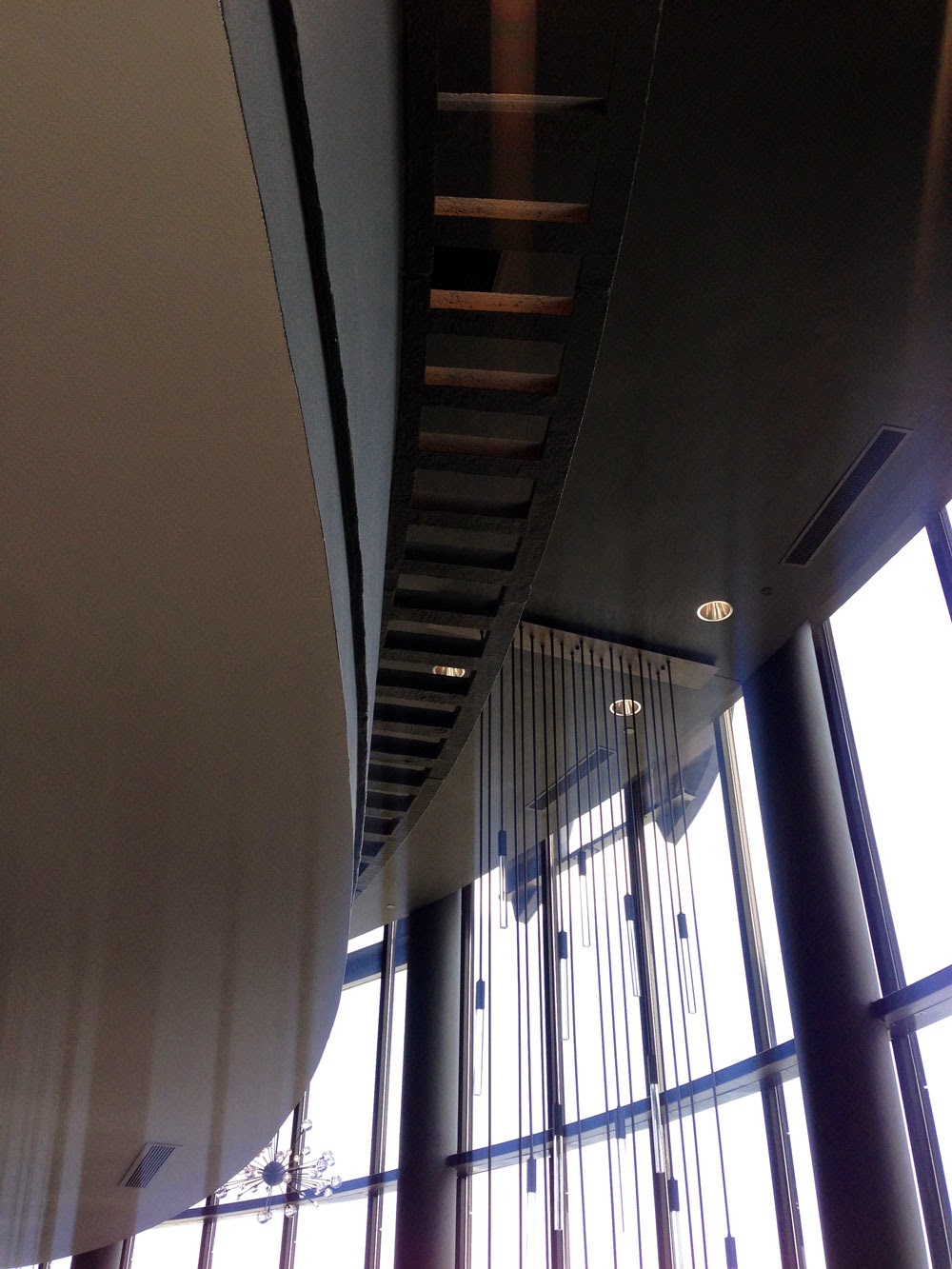 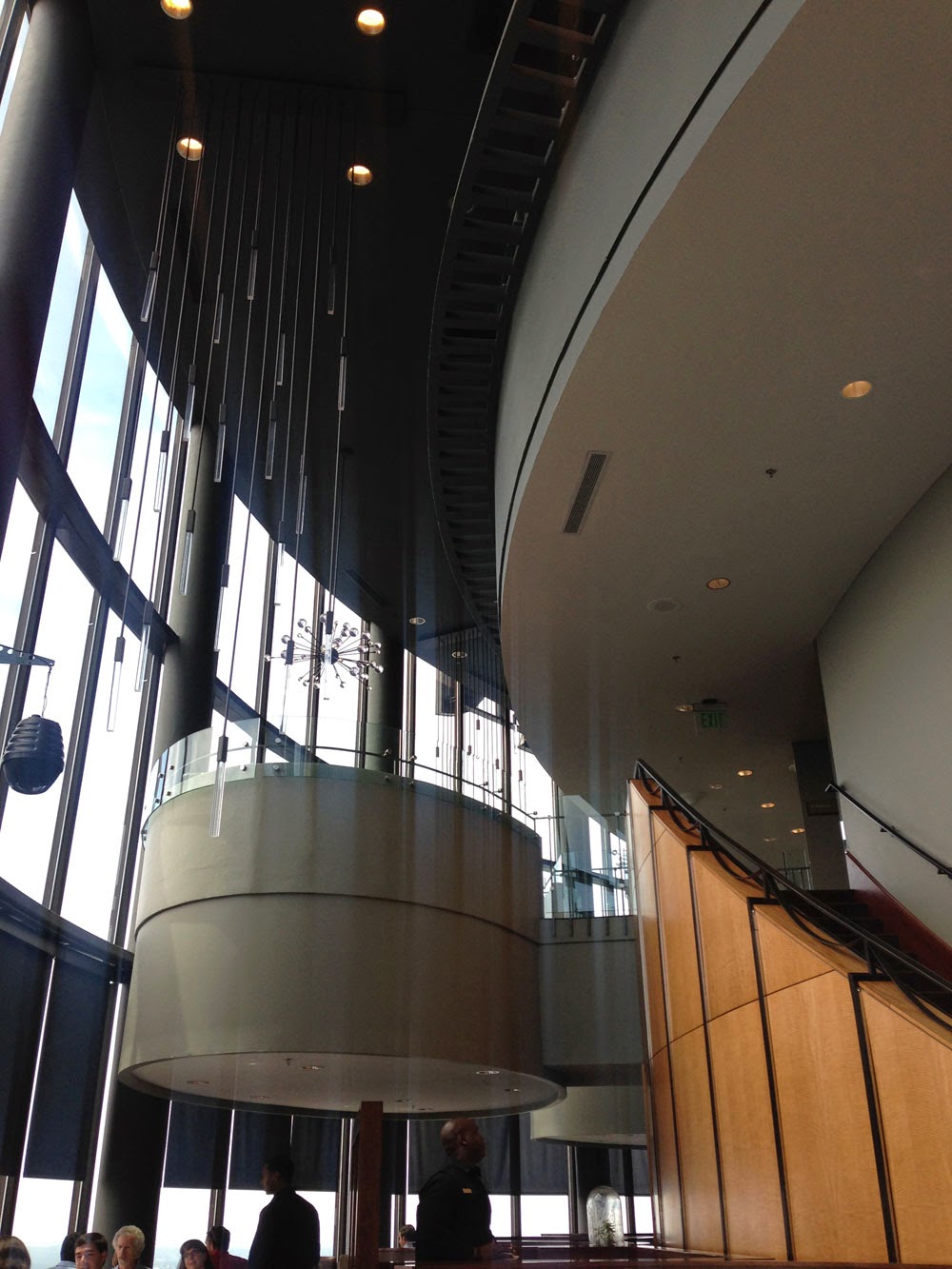 For brunch, you are presented a menu that features most of the same items you would see in any hotel brunch, albeit with a bit of flair (this is a Westin, after all). Sidd and John both order the same Egg White Omelet, while I ordered the Buttermilk Fried Chicken Breast. We started with the House Made Sticky Buns, not knowing that we would also receive muffins. Service was excellent - once the server talked to us a bit he was quite interesting, relating that he loved working at the Sundial (he said "Everyday is special, even when it rains the views are spectacular and the sunsets amazing"). 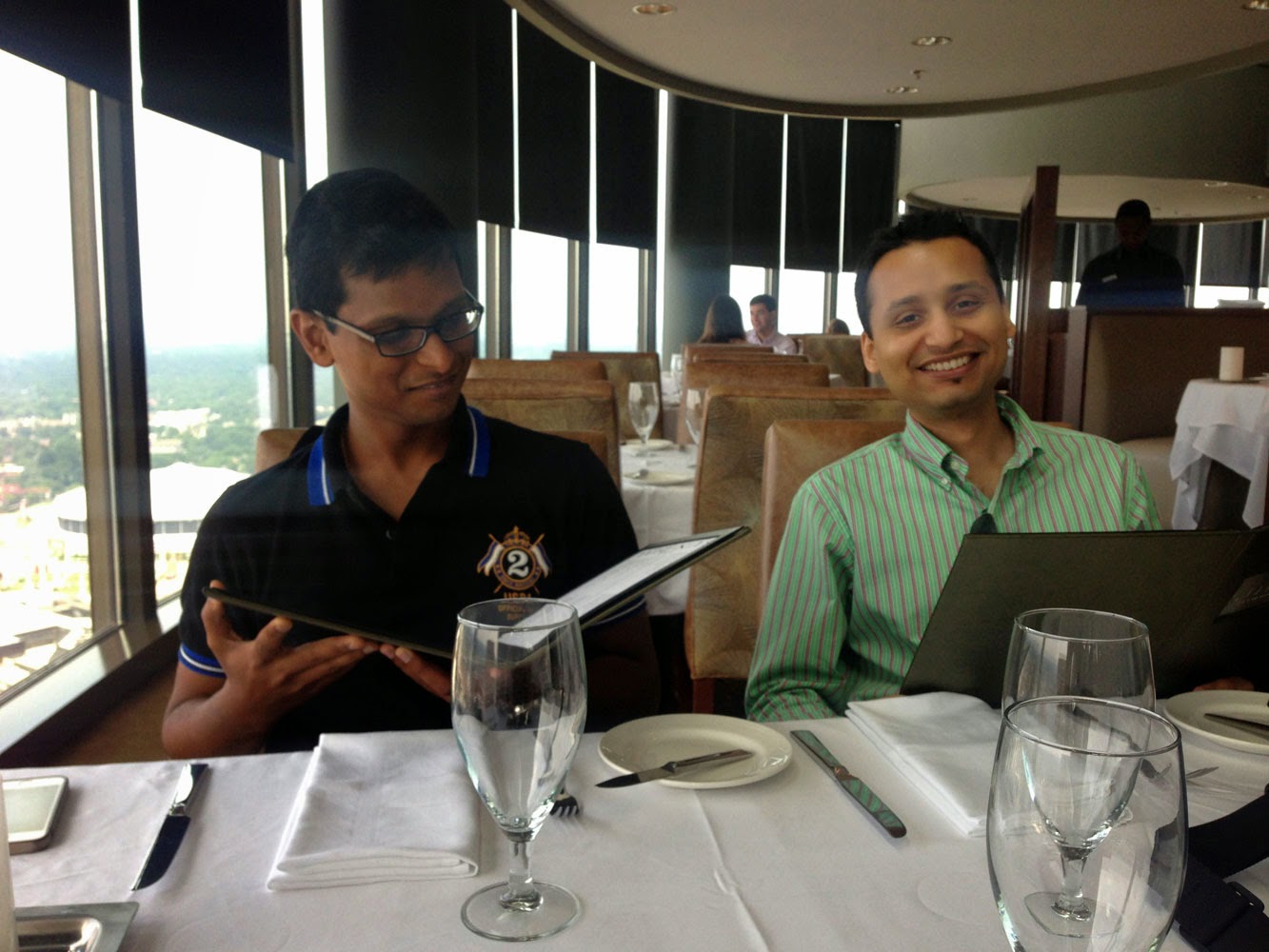 And now for the food. 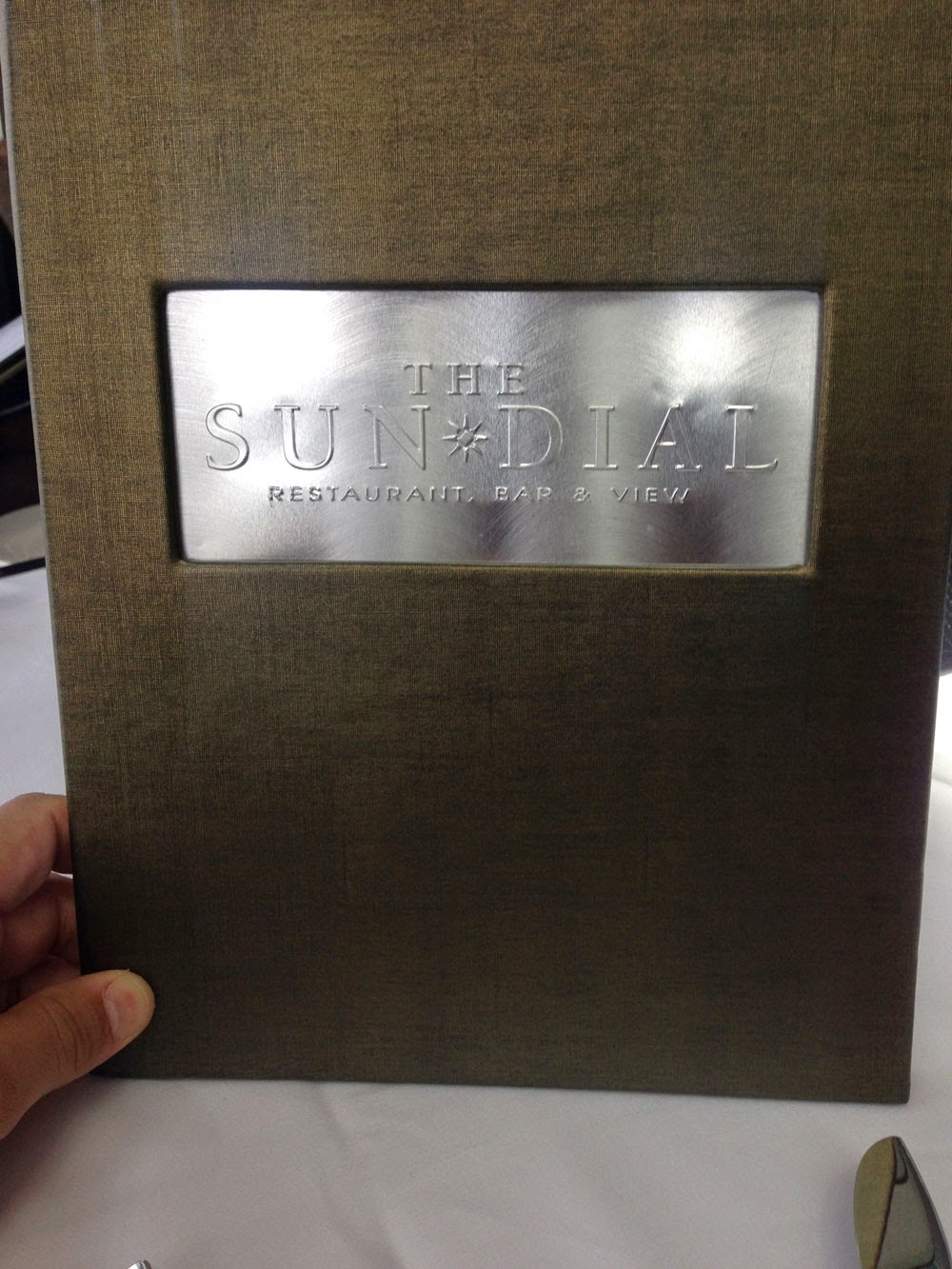 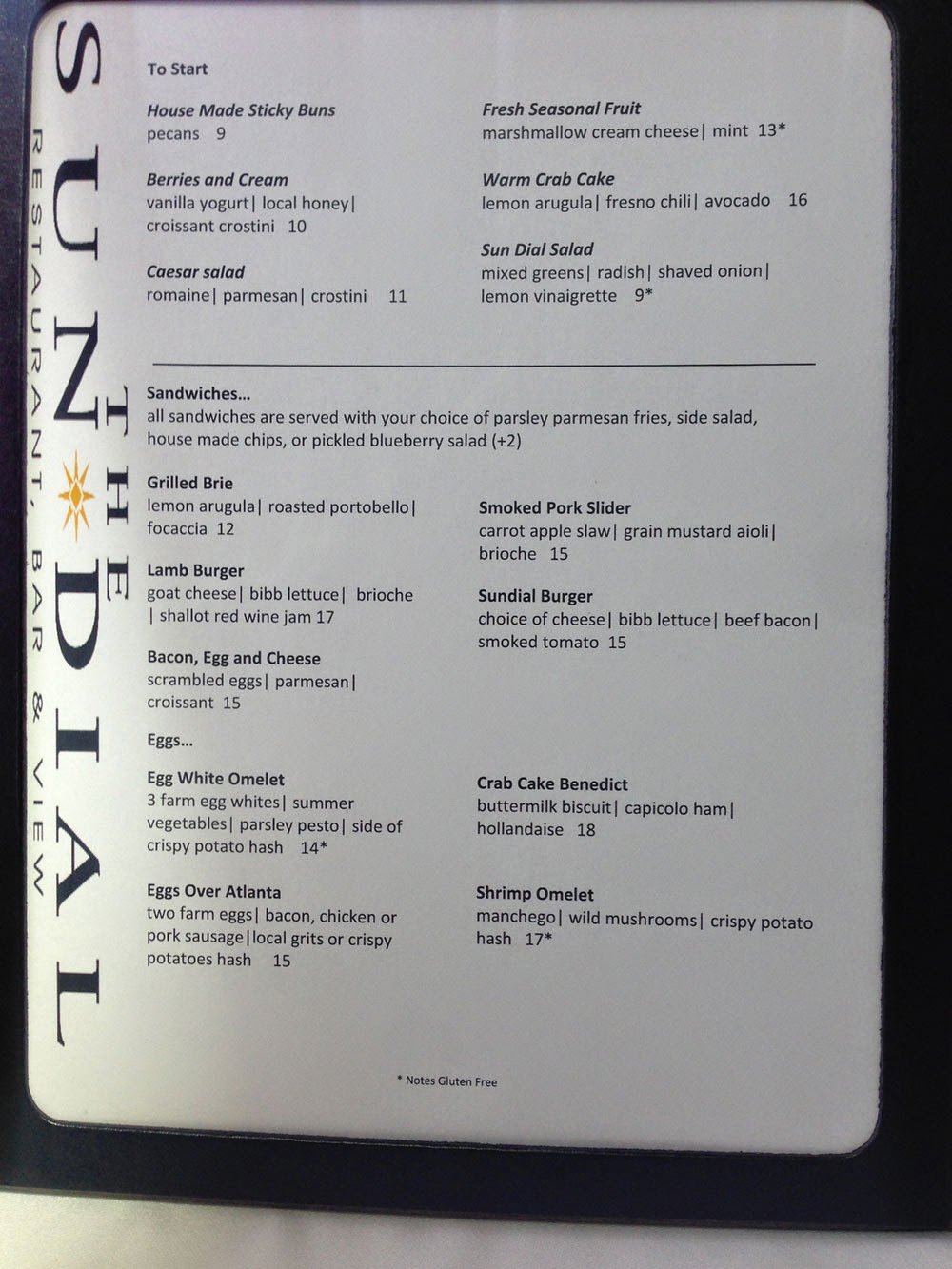 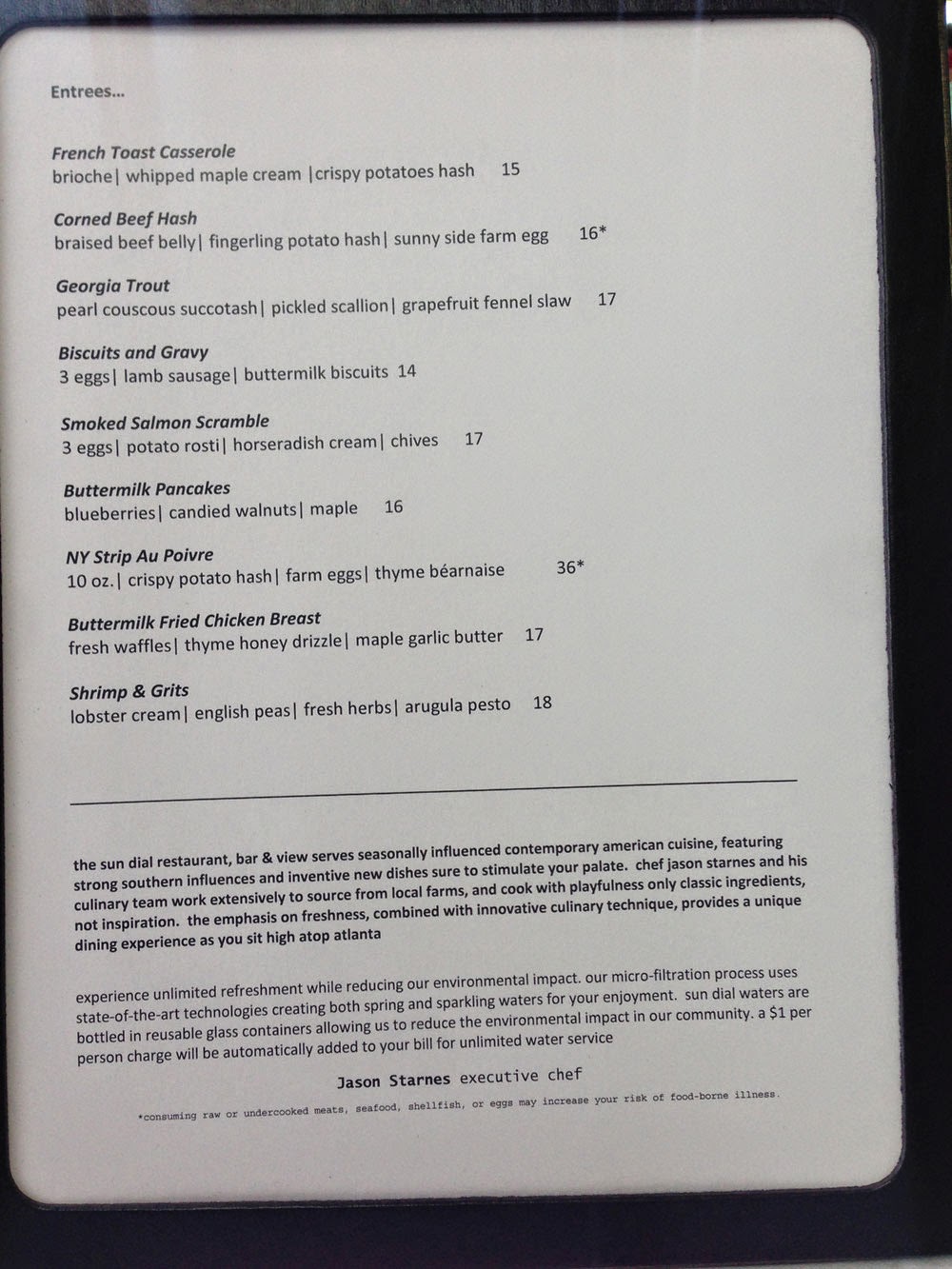 Muffins (think Oat/Wheat and Raisin)
The first thing to arrive at the able were a muffin for each of us. We assumed that these were some type of sticky bun since we had ordered and were told that there were three to that appetizer order. The presentation was nice with each muffin wrapped individually in paper and a big 2 oz or so scoop of butter. These were actually very good with moist centers - obviously recently baked. 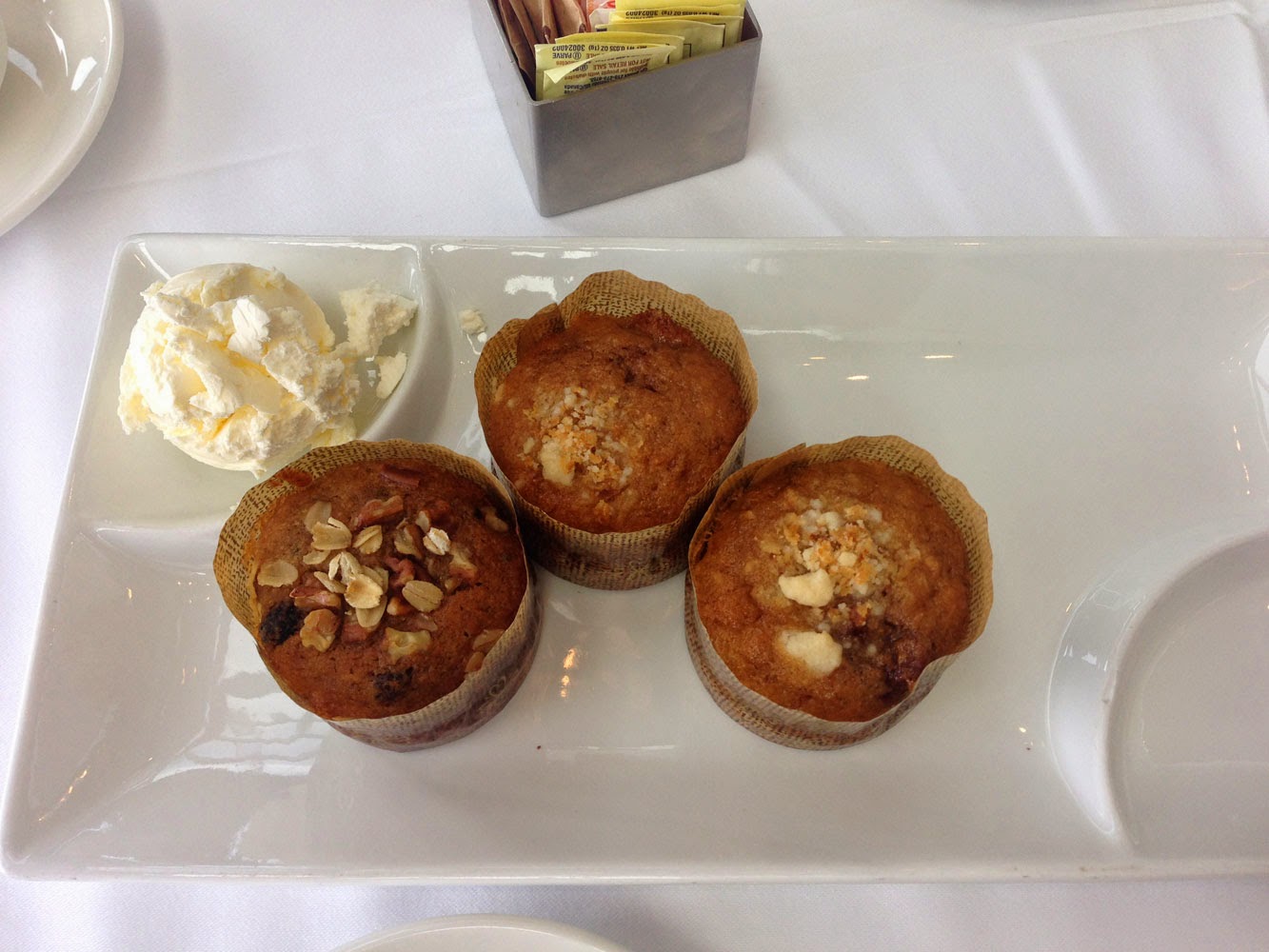 House Made Sticky Buns
Next came out the actual Sticky Buns - that was when we realized our mistake in ordering them (no need since we already received the starter muffins). I wasn't very impressed by these - neither by the size or the overall texture - they were a bit dry. 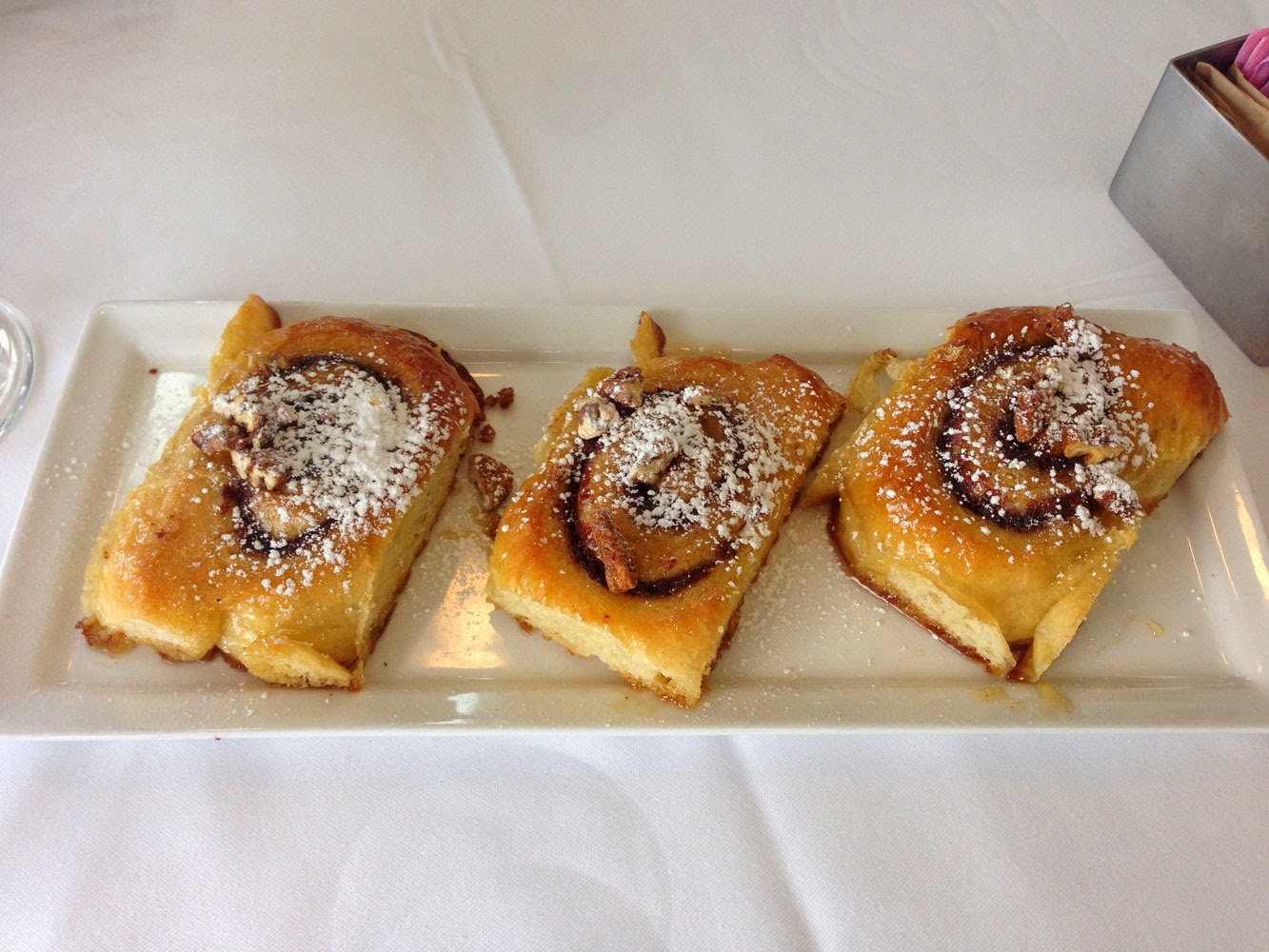 Buttermilk Fried Chicken Breast
This was about a 3 oz chicken breast breaded and fired with a touch of thyme. The chicken was delicious. The waffle is quartered and stacked up on the plate and also had a hint of thyme and chive (chives were the garnish). To the side is a short cylinder of maple garlic butter and the plate is drizzled in thyme honey. I thought the waffles were a bit dry - still edible but I could have used more of the drizzle (I didn't ask) to make the meal more breakfast-like. 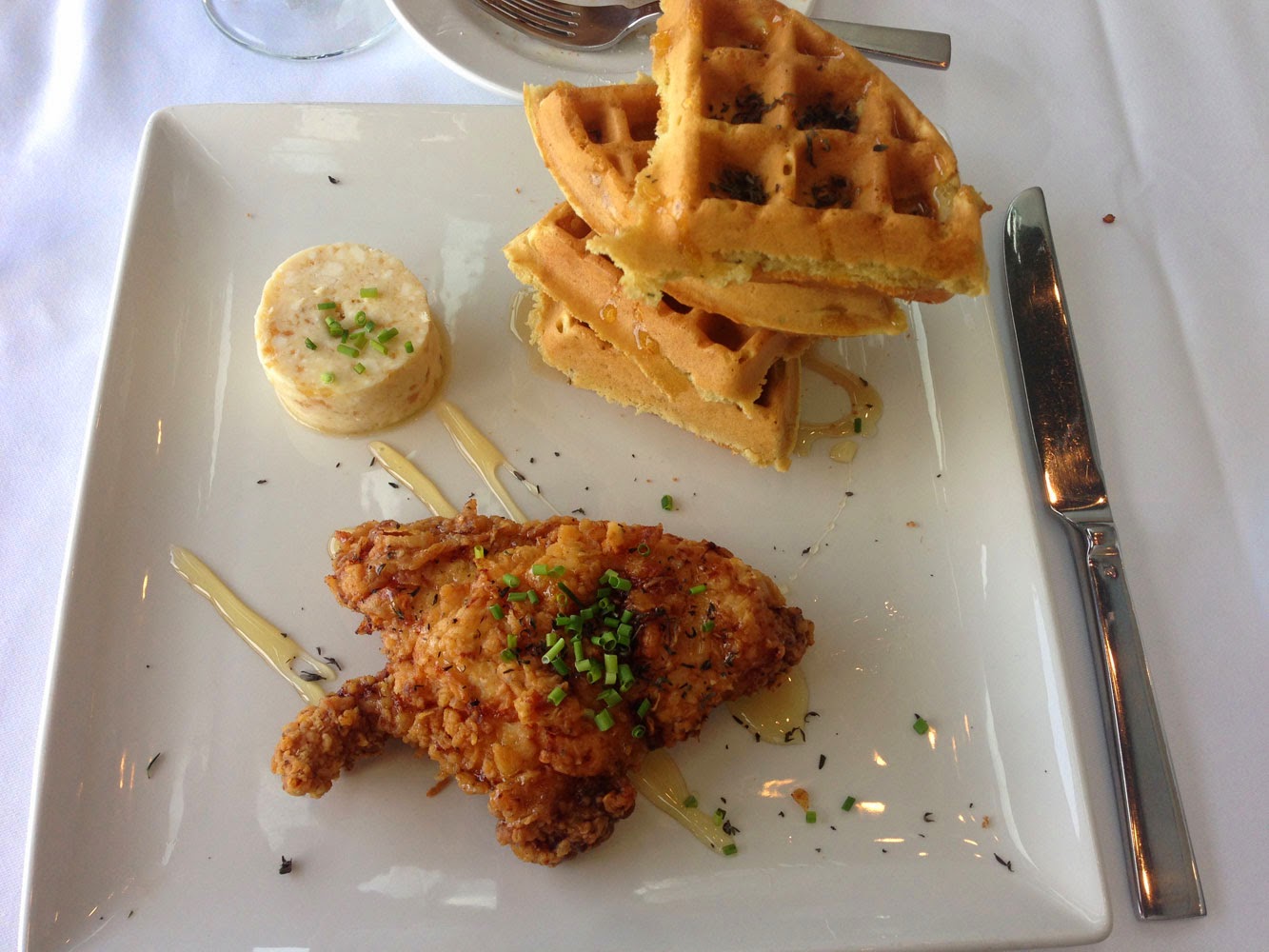 Egg White Omelet
The omelet was stuffed with veggies and came drizzled with parsley pesto and a side of sautéed potatoes/onions. I was told the omelet was good but the potatoes were cold by the time the plates arrived at the table. Both my dining companions were too polite and enjoying the views too much to complain, so I left it alone. 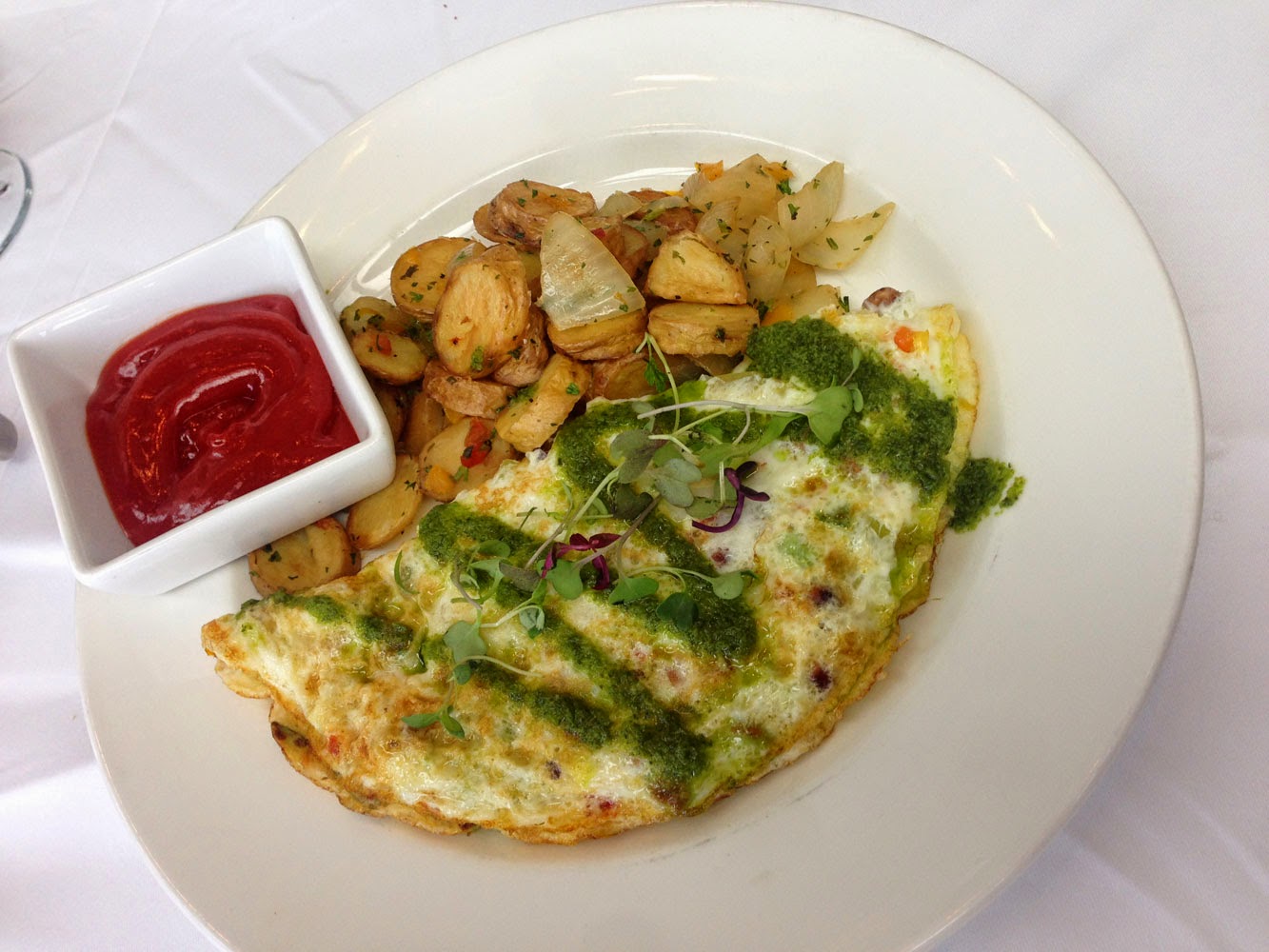 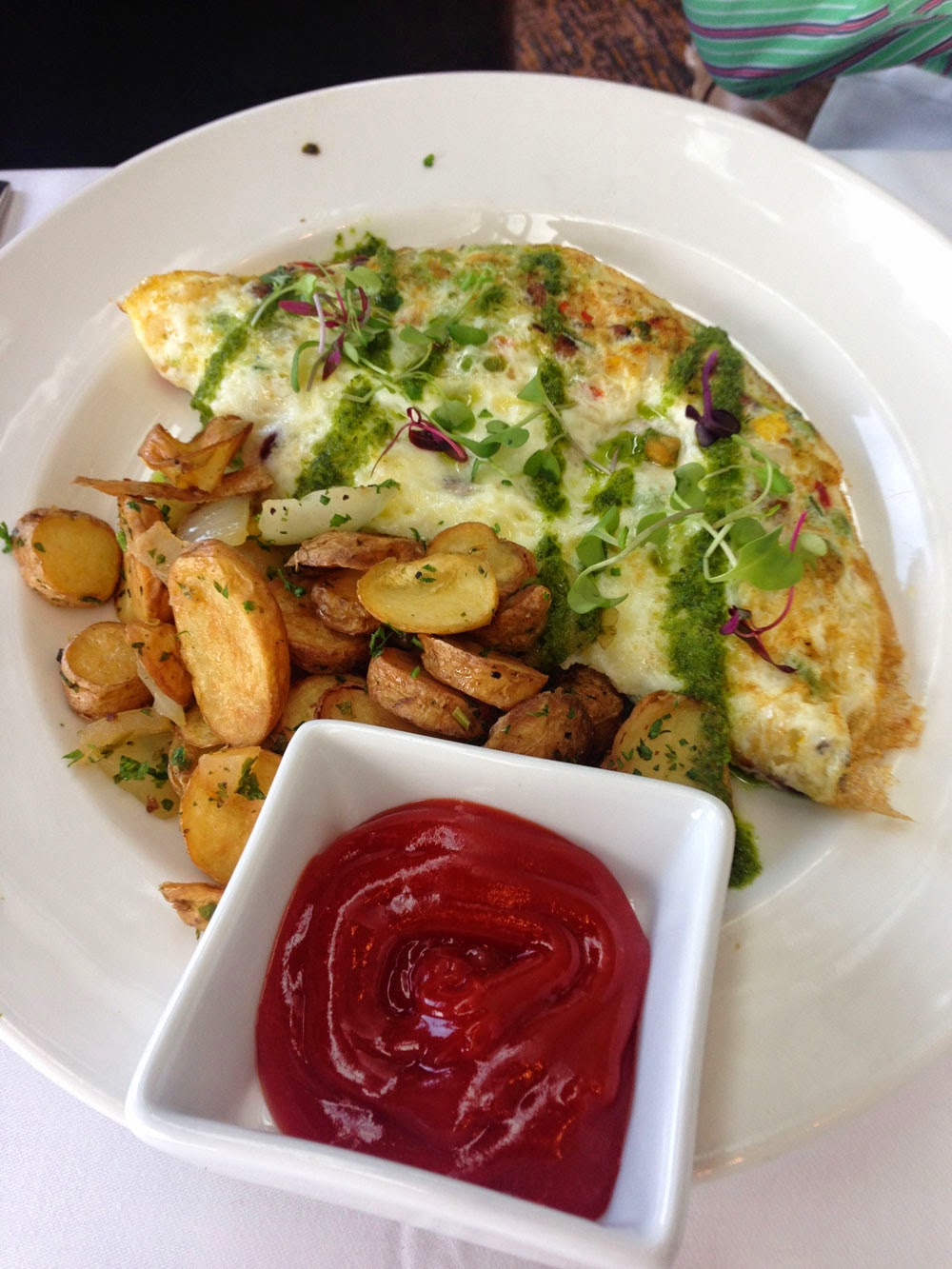 We wanted some alcohol (Mimosas as minimum) but since our reservations were at 11:30 and Fulton County doesn't allow the serving of Alcohol until 12:30, we decided to wait until later. 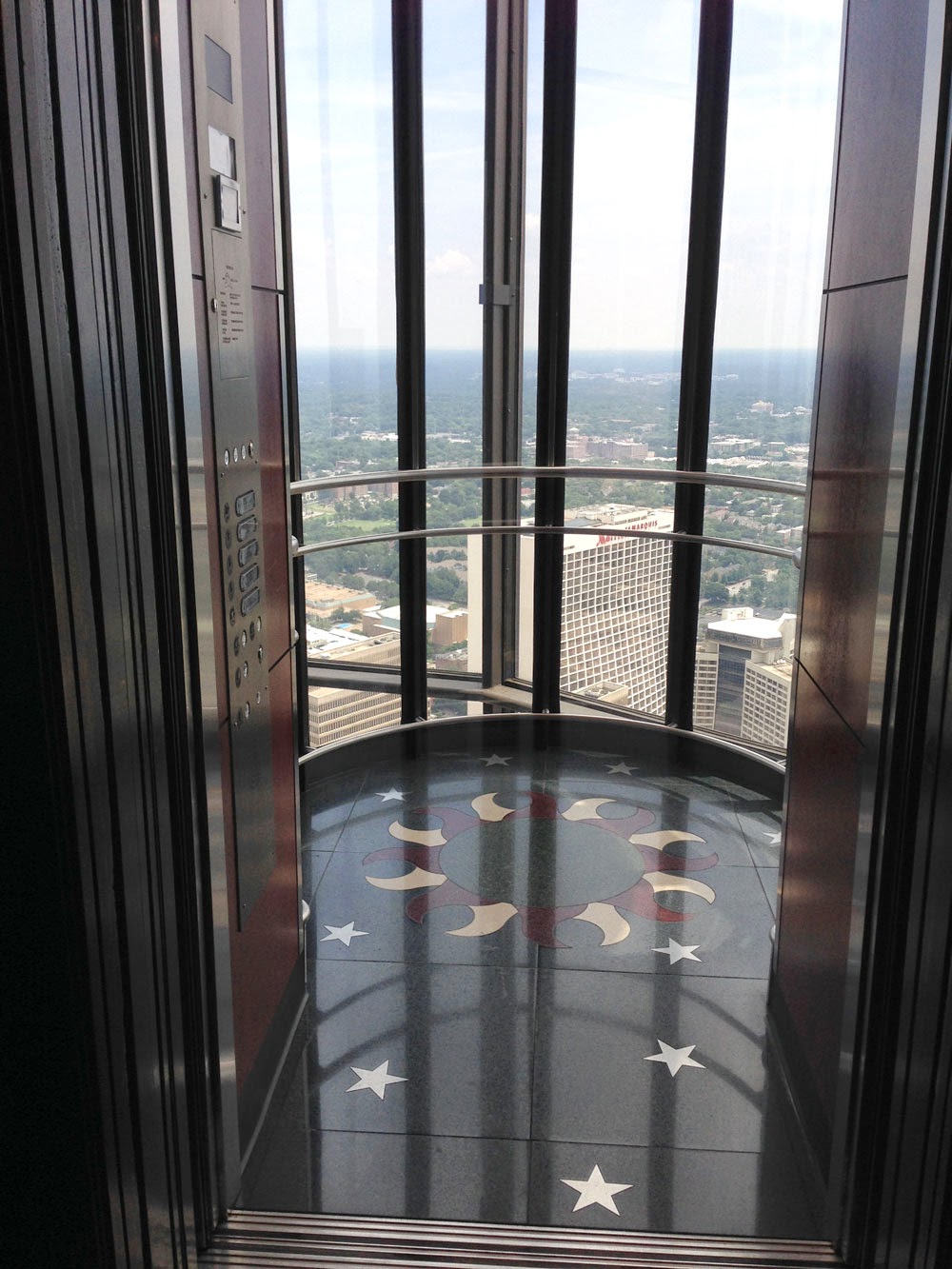 Exiting the Sundial you get the spectacular and dizzying view from the elevator once again. In all, we enjoyed ourselves but I felt the food was a bit sub-par to my expectations. I still rate this 4 out of 5 stars due to the overall experience.