(shorter review also published on Yelp)
Southbound is best described as a Nouveaux Southern American restaurant (don't worry, I'll explain) built in the rather restaurant starved city of Chamblee. In fact, it's right down the street from the Chamblee courthouse on 5394 Peachtree Rd, occupying the location 100 year-old (or so) Masonic Lodge. Southbound was first suggested to me by my old friend Robbie C. who had eaten there for lunch - from his descriptions I could tell he was mightily impressed, and he's not one to impress easy. I've really been looking forward to a visit - when one of my friends suggested getting a group there for dinner Friday night I was like "Let's do it!"

I looked for the location using Google Maps and basically went right past it - the restaurant is in a row of attached buildings that I was familiar with - one of my friends once owned a vintage toy store in one bay and right in the middle was at one time a tofu processing plant. Driving back I entered from the South end and saw the old, inadequate parking and found a brand new lot had been added on the Northern end - good thinking there. Nothing kills a business more, especially in Atlanta, than to have poor or no parking. This became even more relevant as I learned who one of the owner's of Southbound is, as I'll relate later. 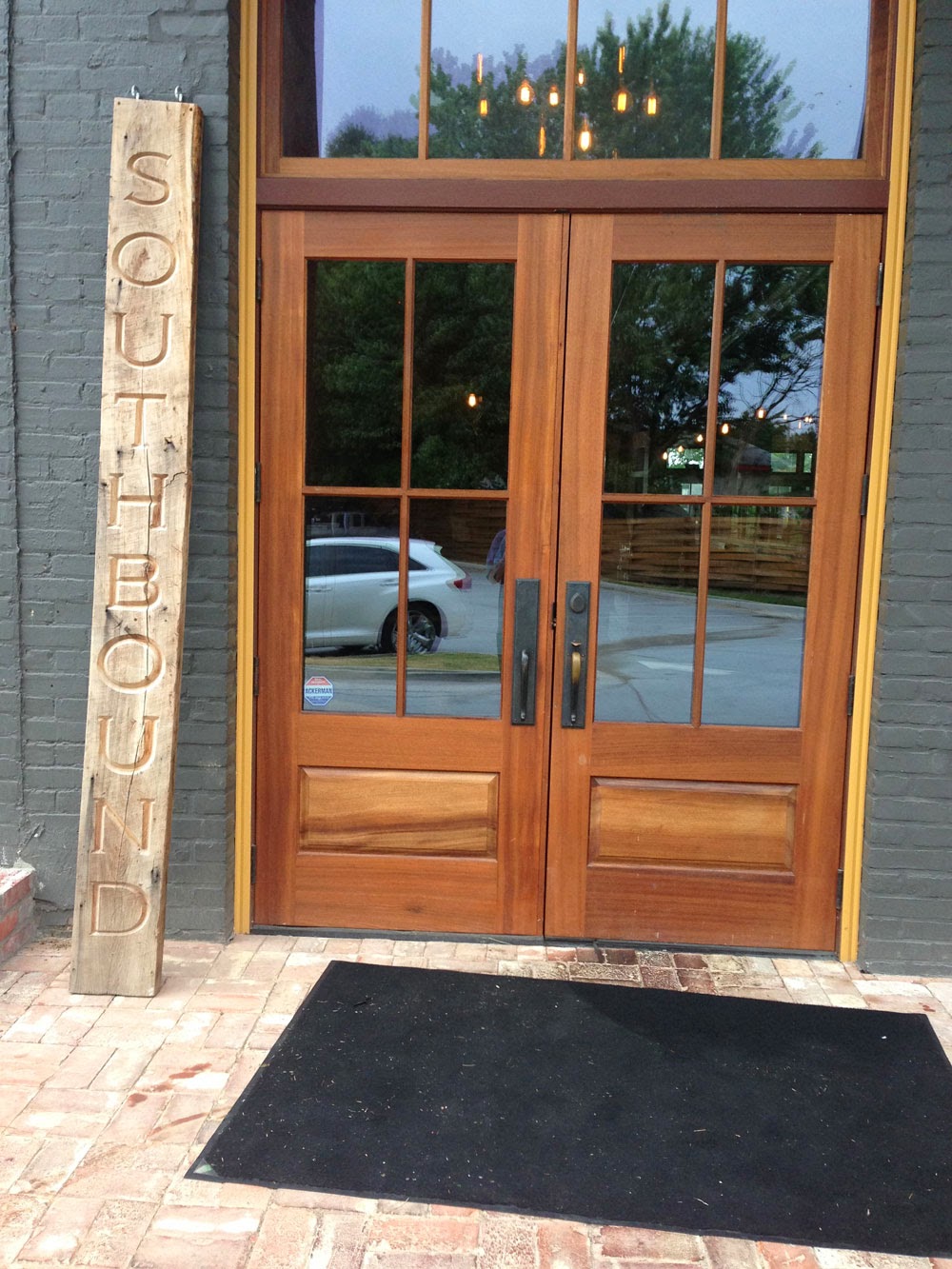 Walking up there's a hand-fashioned wooden sign with "SOUTHBOUND" carved into it vertically - it was laying to the left of the back entrance and with the eyelet screws visible at the top, will presumably be hung nearby. The double doors and above-the-entry (transom?) window has certainly been added as I don't have any memory of it being there from my previous visits, prior to the restaurant being there. Walking in I received a really fantastic shotgun-shack view through the dining room and into the exit on the opposite end (turned out to be the front entrance) - this was my first indication that the restaurant was something really special - my second was the very high ceilings with exposed brownstone brick and wood and third, being immediately greeted by an extremely attentive staff. Outside the front door is lacking in signage, but there is a small chalk board noting that Southbound is open for dinner. 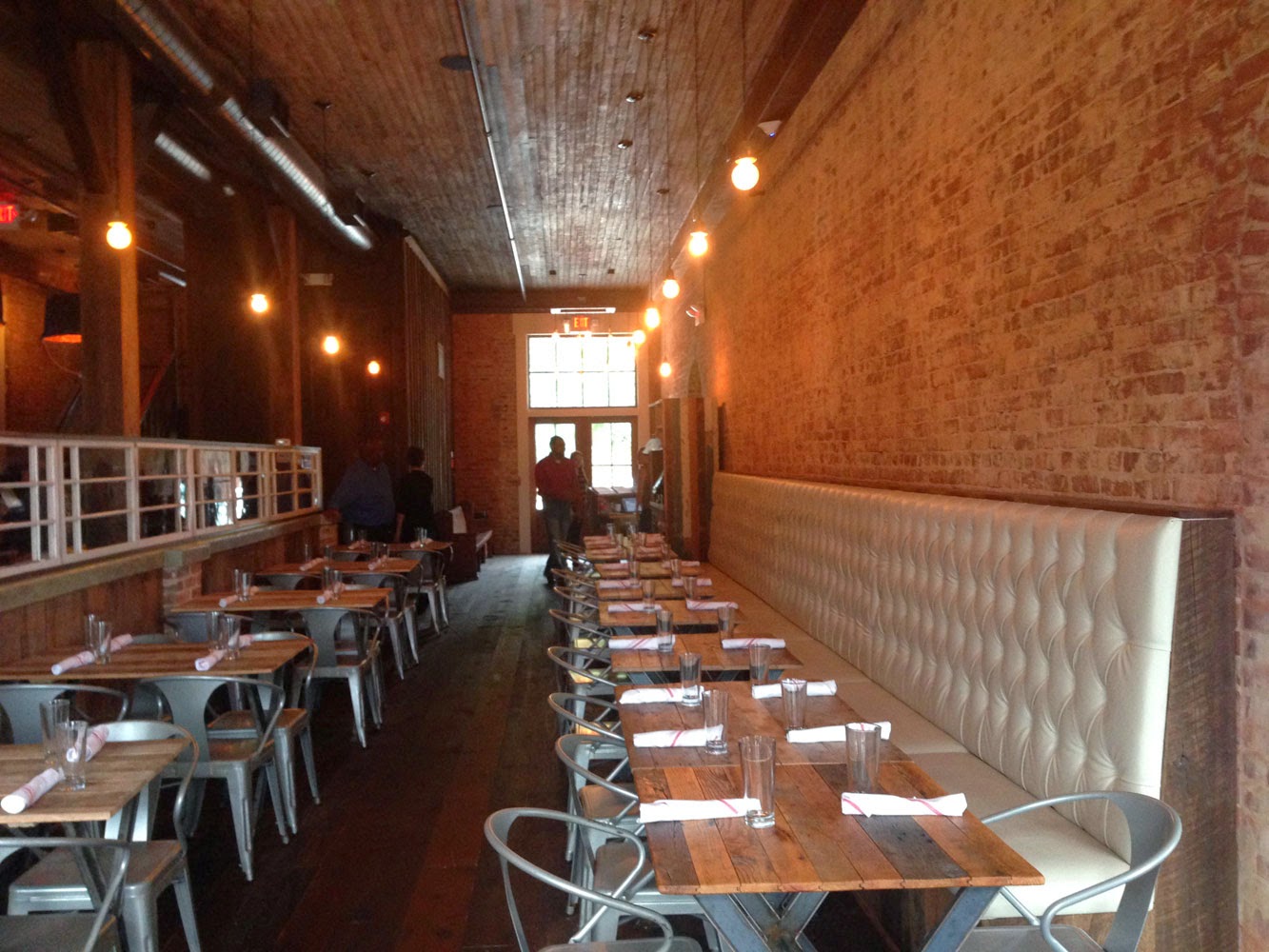 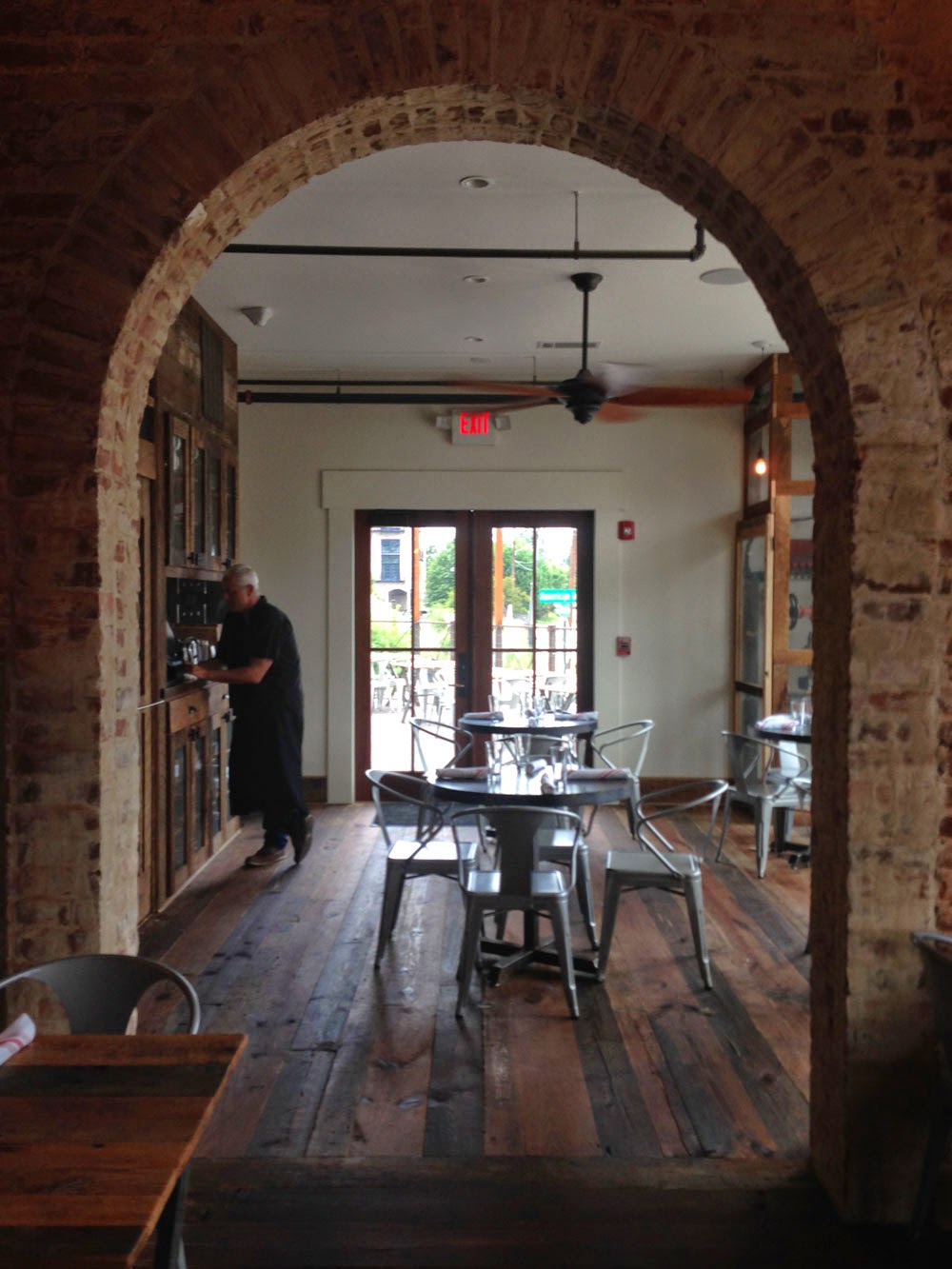 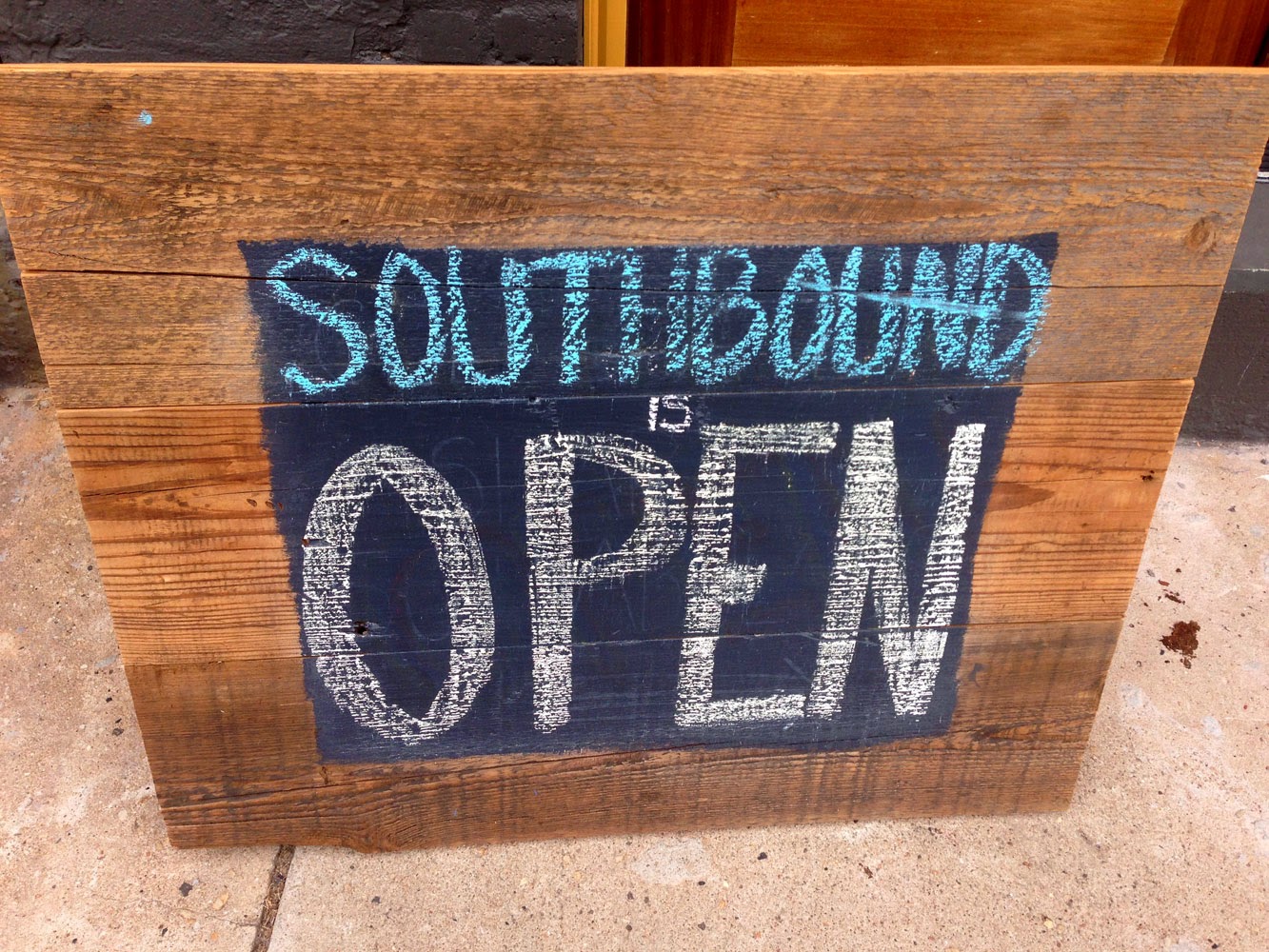 I looked for my dining companion and when I figured out she wasn't there, I went to the end of the bar and took a seat. After looking at the menu I decided to order a very nice Boulevard Tank No. 7 Farmhouse Ale - it's so nice having something other than the usual to sample and this was indeed a treat. Tank No. 7 is a saison style ale, something like a Belgian but with a bit more fruit - much more robust that the weiss beers that I despise, with a bit more yeast and none of that silly sweetness you find in some Belgians. This was a delicious choice which I continued through dinner and thus far, Southbound felt more like a gastropub than fine dining - must have been my vantage at the bar. My former colleague showed up a few minutes later and ordered a house white which she found very good. 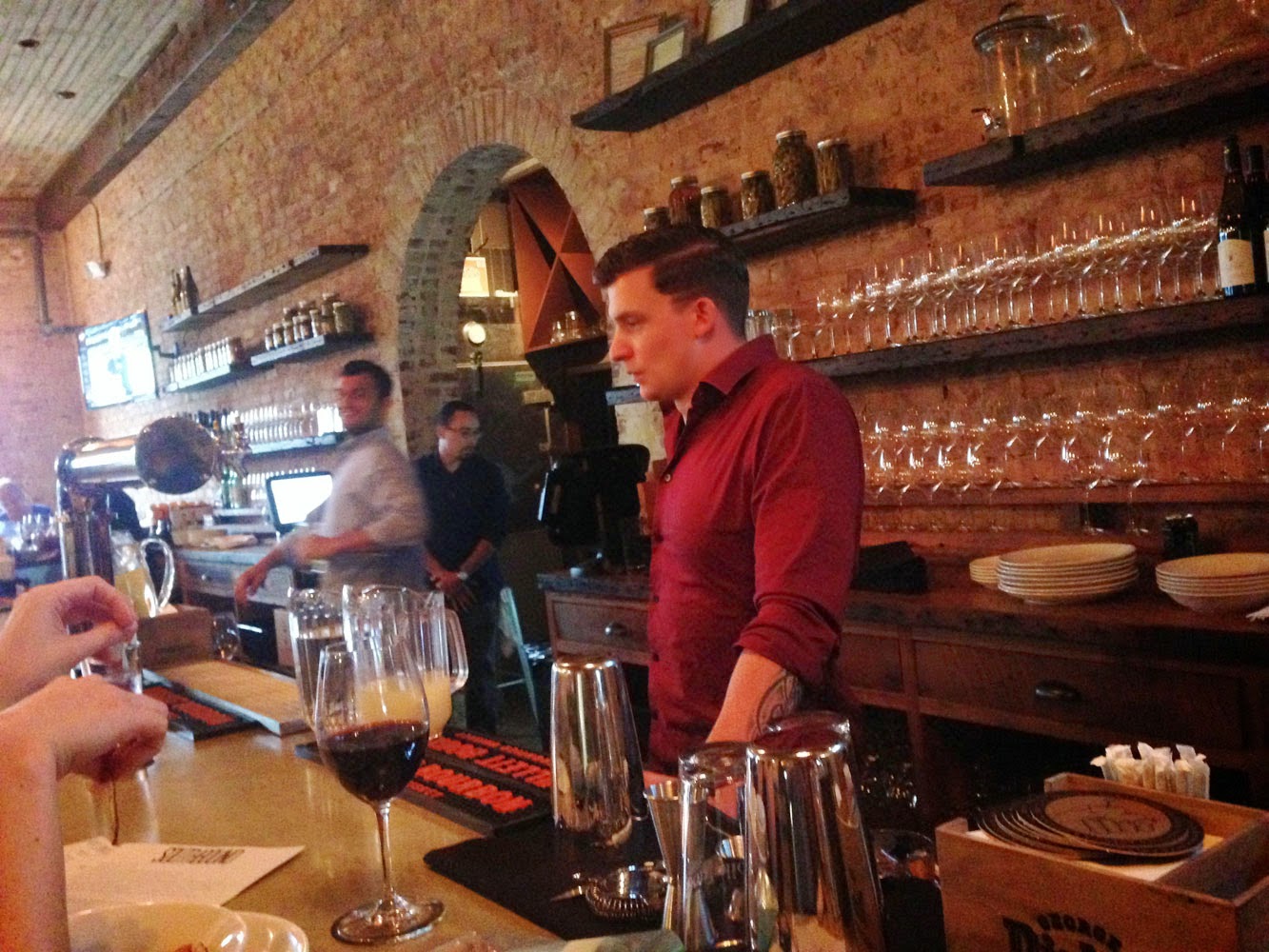 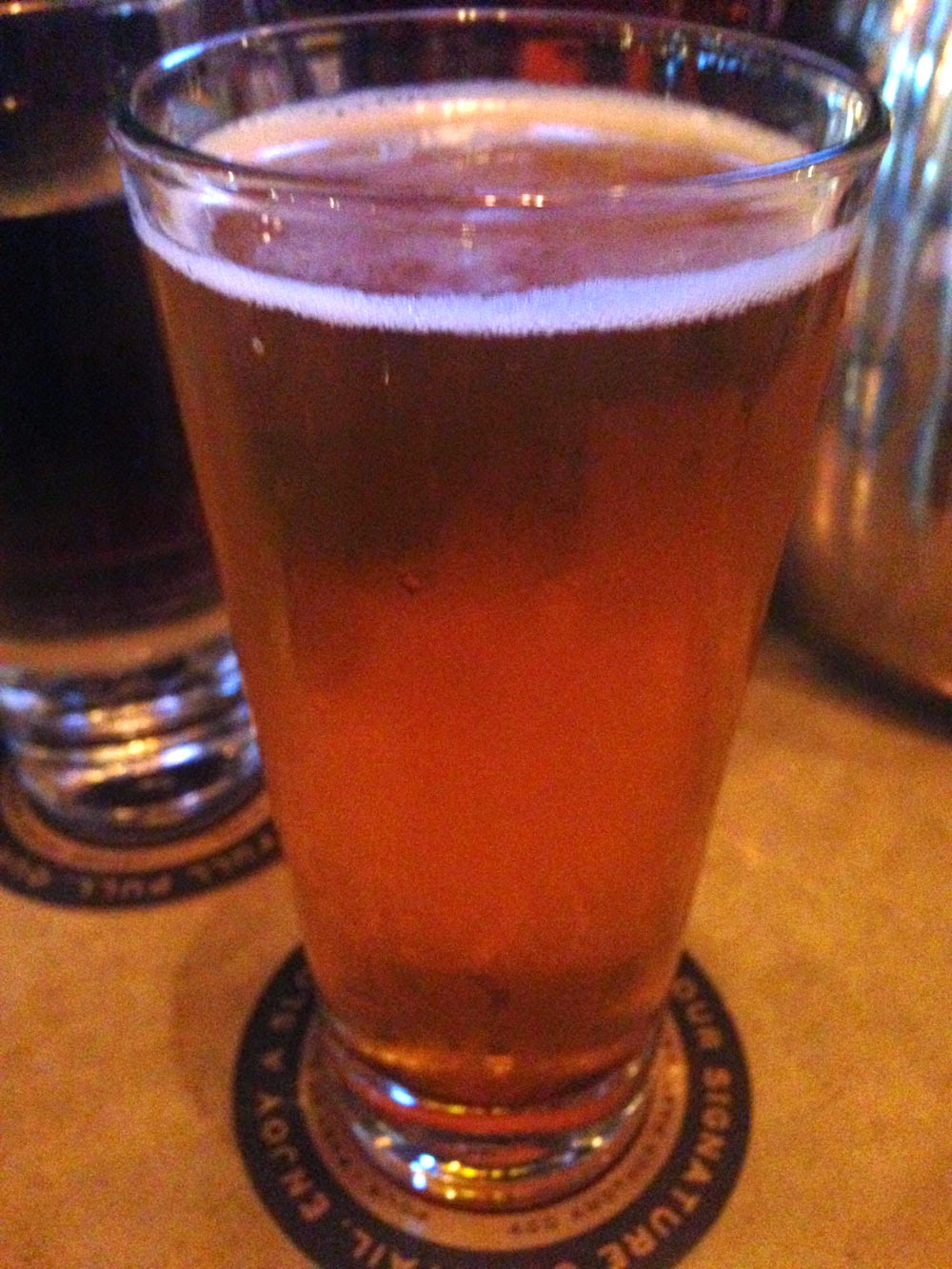 While seated at the bar I was noticed by someone who appeared to be the owner to me (he was helping out doing some bar-back work and answering questions from servers and hosts) - I introduced myself and he addressed himself as Dennis (Lange) - I soon found out through conversation that he was one of the partners. As we talked he realized that I was also one of the many "restaurant people" in the area and through discussion we noted that there were about three degrees of separation between us. He was the owner of a restaurant I would occasionally visit called Yakitori Den Chan that existed in Buckhead across from the Roxy. He was also one of the partners of 5 Seasons Brewing - I remember that place in the Prado fondly (it was originally Phoenix Brewing? I don't remember as it seems it's always been 5 Seasons) - now we get to the part about parking I referenced earlier - 5 Seasons basically got screwed (my opinion) by the builders when the Prado was being revamped to house Target and Home Depot - the parking was so screwed up there that what was a thriving business become decimated - it's hard to believe anything survived in the Prado while all the building was going on. In any case I spoke about my own experiences working for the Buckhead Life Group and finally at Indigo Coastal Grill - turns out he got married there - and that's where the 3 degrees of separation comes from. The other partner is Mike Plummer - who I didn't get the chance to meet but hope to at some point.

We talked at length regarding the attention to detail that is very evident in Southbound - it took a lot of time to put together this wonderful space. His desire was to reuse as much of the existing materials as possible so a lot of the space is recycled from the old. I think he's done a fantastic job and that alone makes Southbound remarkable. I also met several of the other staff members including someone (I don't remember her name) who is working on turning new handles for the beer taps on a lathe - it's really tough to assemble a multi-talented, cross-functional team like what Dennis has done here - well worth the visit. The space is large, with two long galleys, a separate room to the right of the front door and stars to an outside deck (that overlooks the back of the space - the front overlooks the train tracks and is very industrial, so the back is a much better choice). 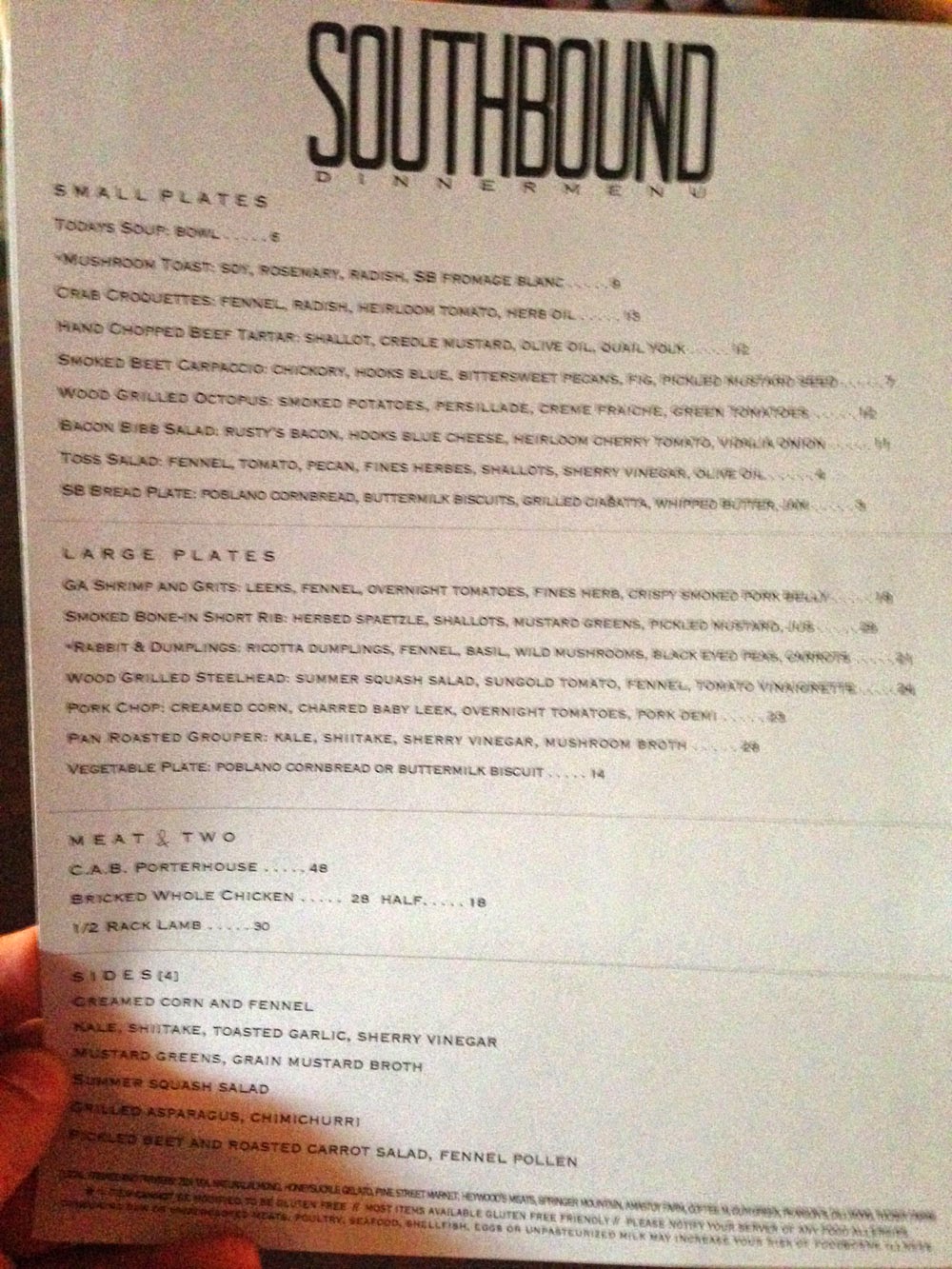 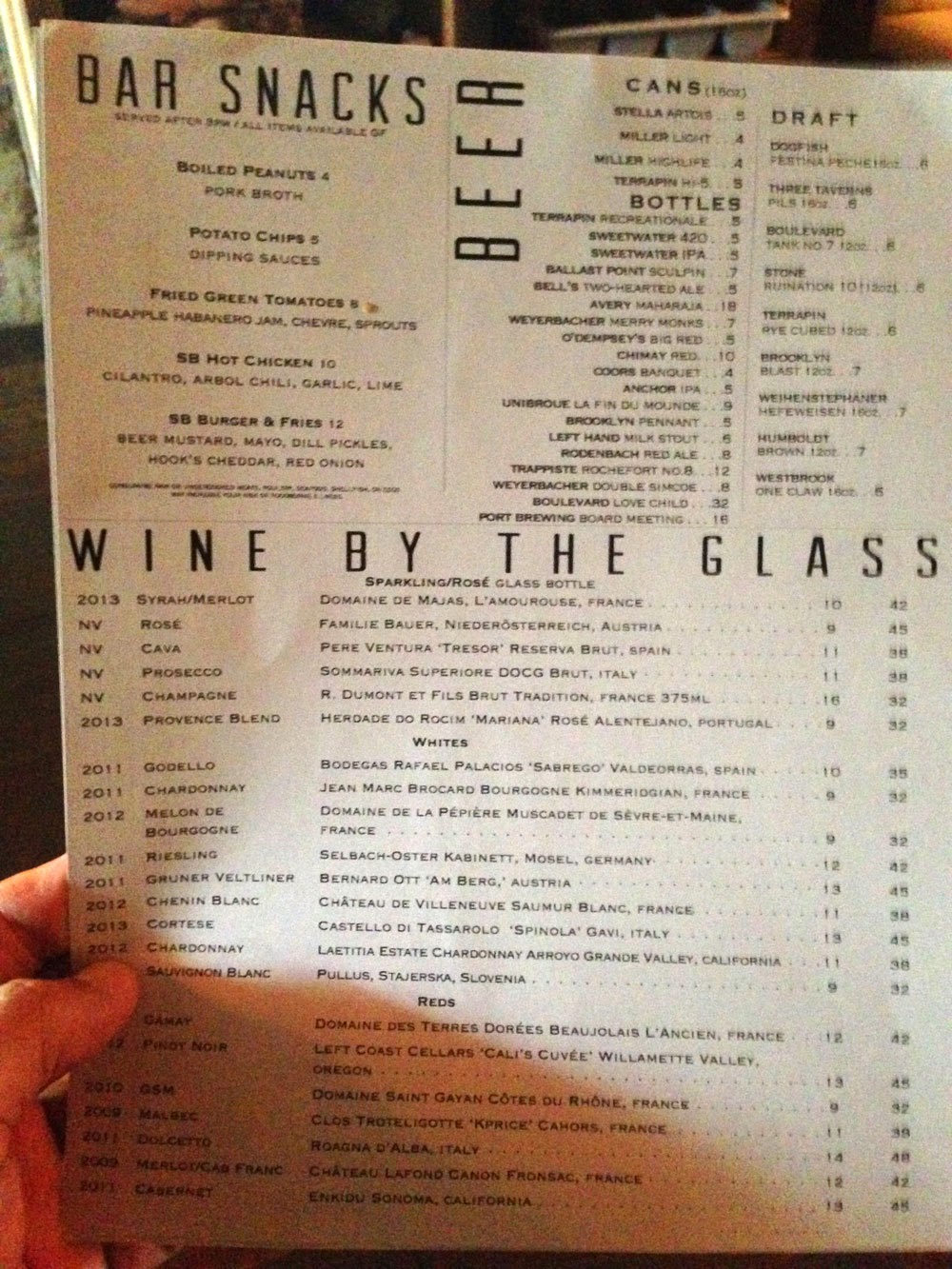 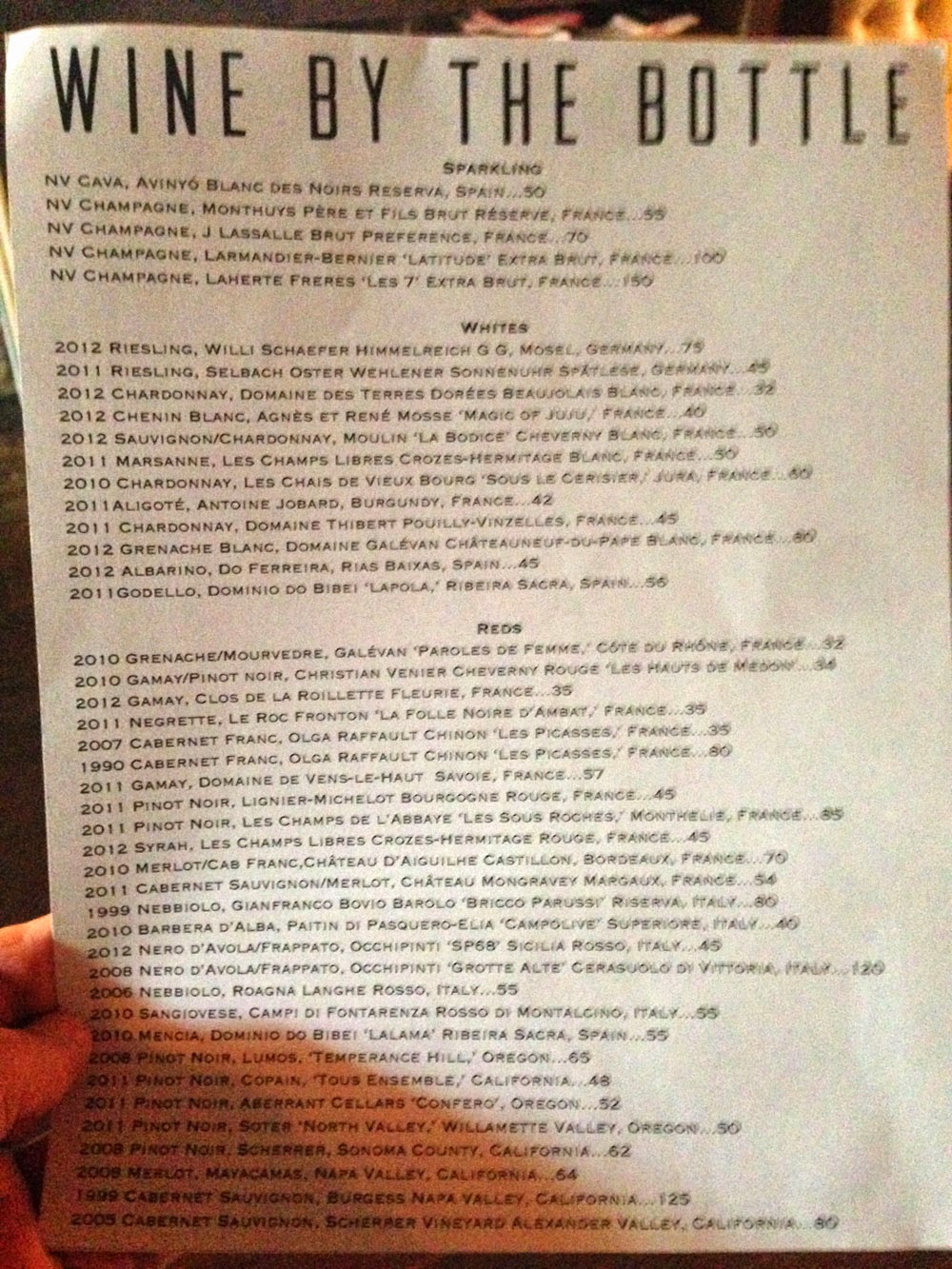 Ok, let's get to the food. I had read a few reviews and knew of a few of the signature items to try. The lunch chef is Mihoko Obunai and along with Ryan Smith and their past experience at Watershed (another restaurant I'm very fond of) I came with great expectations. Turns out the evening menu is done by chef Cooper Miller, formerly of Livingston (which is what occupies the old Mayoral home of Livingston Mims and now features fine-dining in a modern setting). I knew that the menu was going to be something special - I think they refer to it as "Southern soul food with local flare and an international twist" but I like to think of it as "Nouveaux Southern American" - think of southern basics but then add some Asian fusion and interesting techniques to the mix. I thought at first to just order the appetizers however after reading some of the entrée selections, we went with two apps and two entrees: 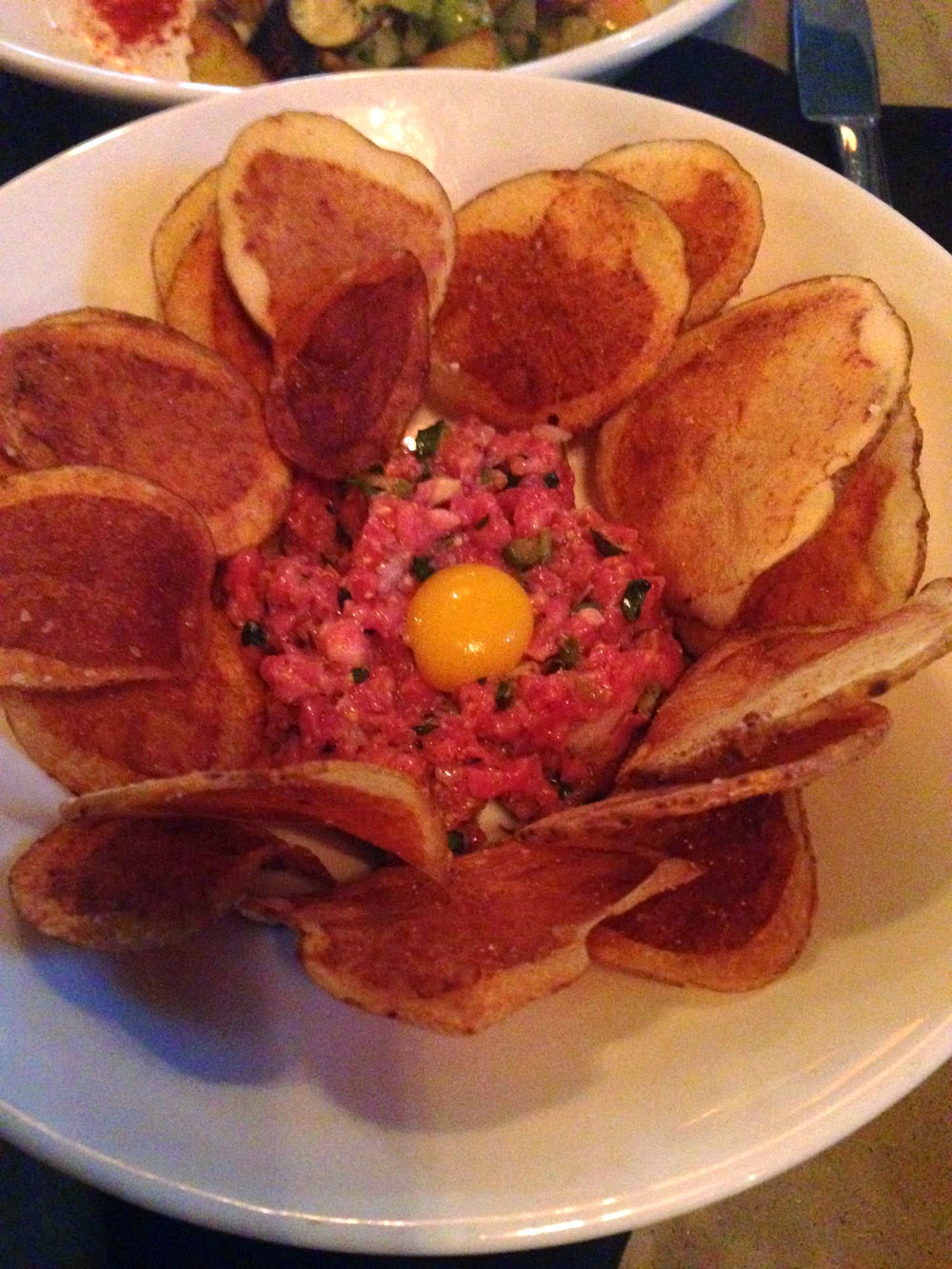 Hand Chopped Beef Tartar: Shallot, Creole Mustard, Olive Oil, Quail Yolk
I'm a big fan of rare beef and this tartar was quite up my alley - the addition of the piquant mustard and shallot and then the creaminess of the quail egg made this appetizer my favorite of the two. Served with home-cut and hot-temperature-fried chips. 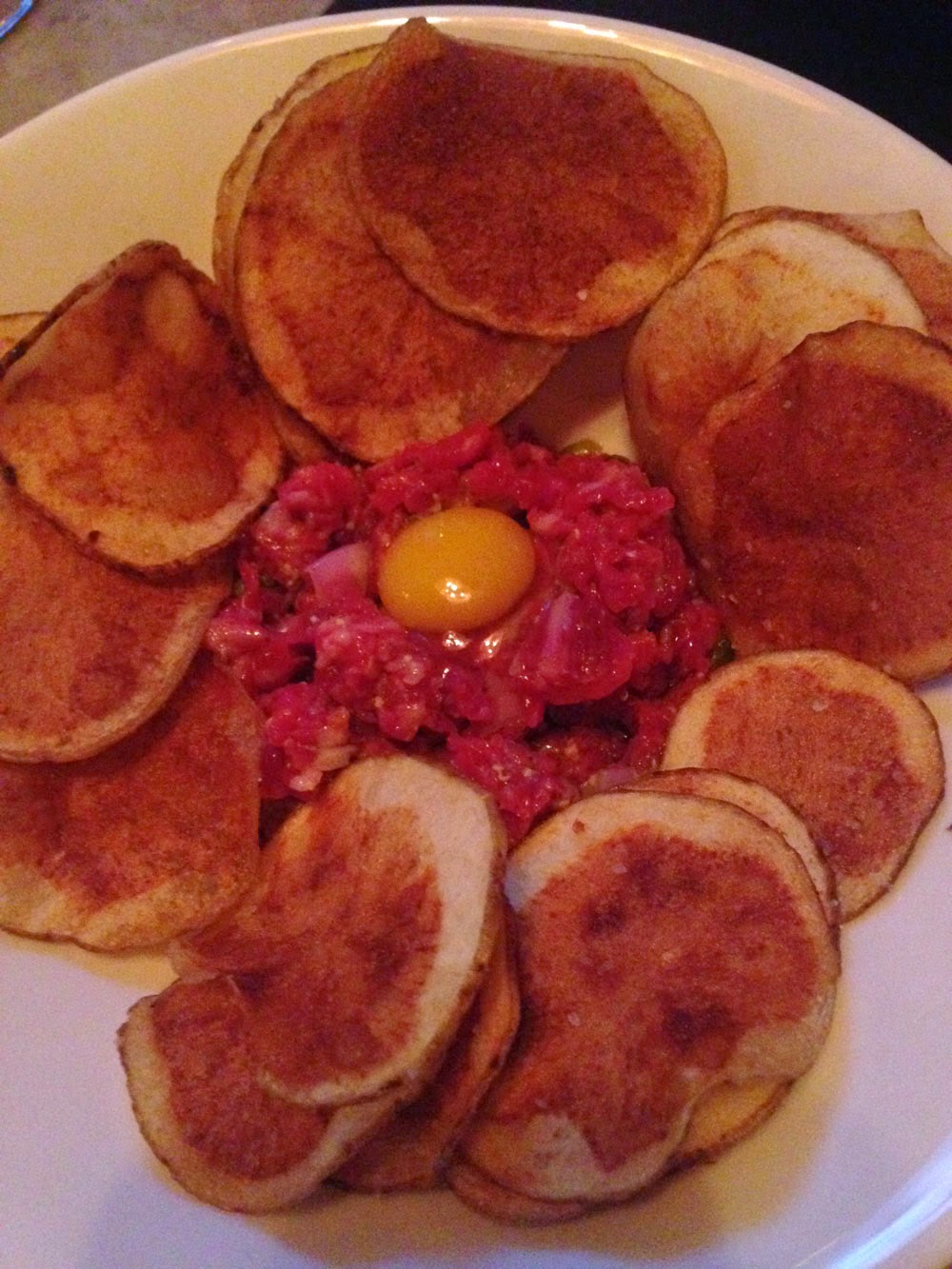 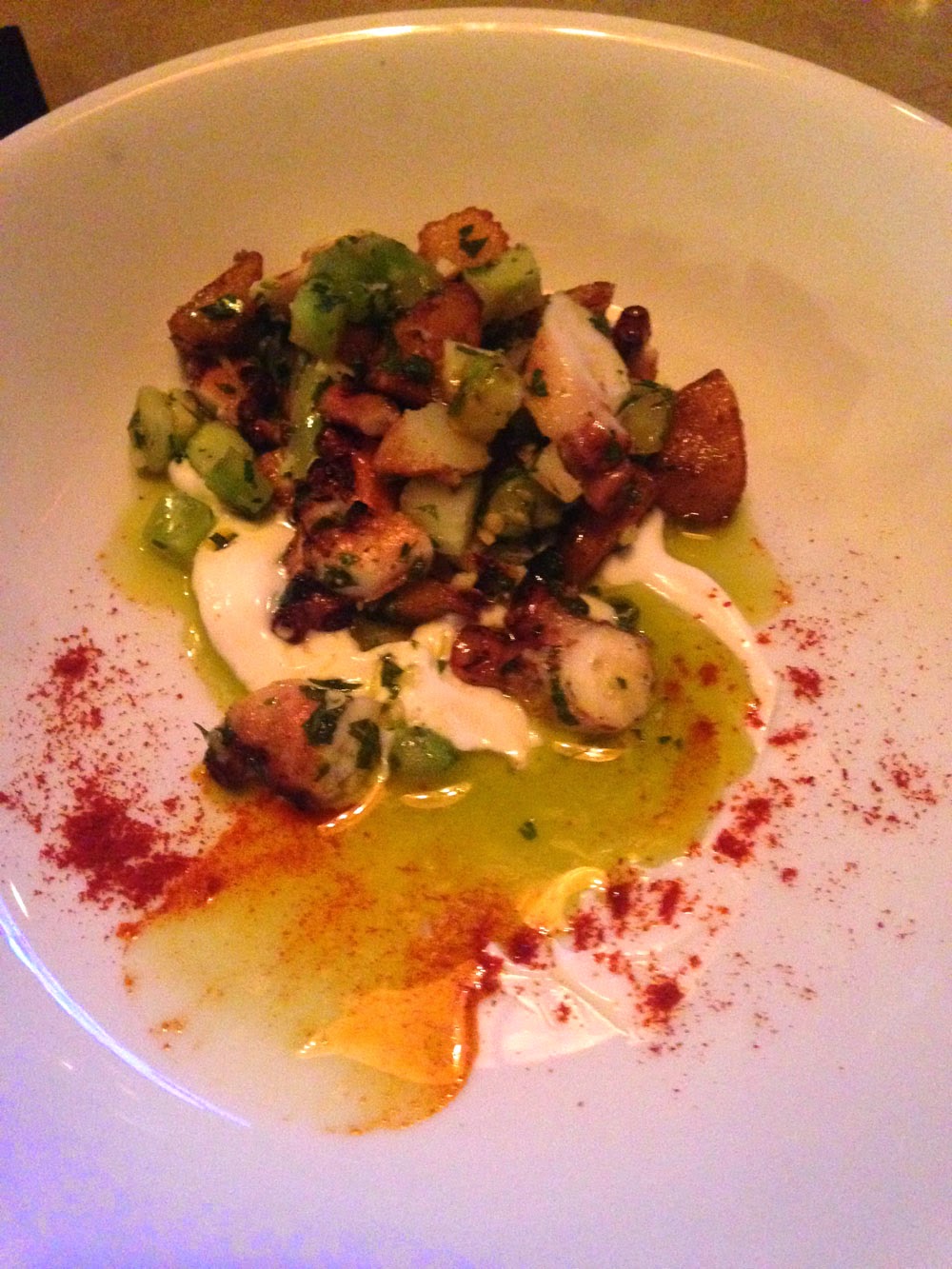 Wood Grilled Octopus: Smoked potatoes, persillade, crème fraiche, green tomatoes
I loved the smokiness of this dish but do wish the portions were about a third larger. I really enjoyed the green tomatoes (I initially though they were cucumbers - they provided some needed crunch) - personally I would have liked a bit more acidity in this dish to make it perfect, but I think it would satisfy most palates. 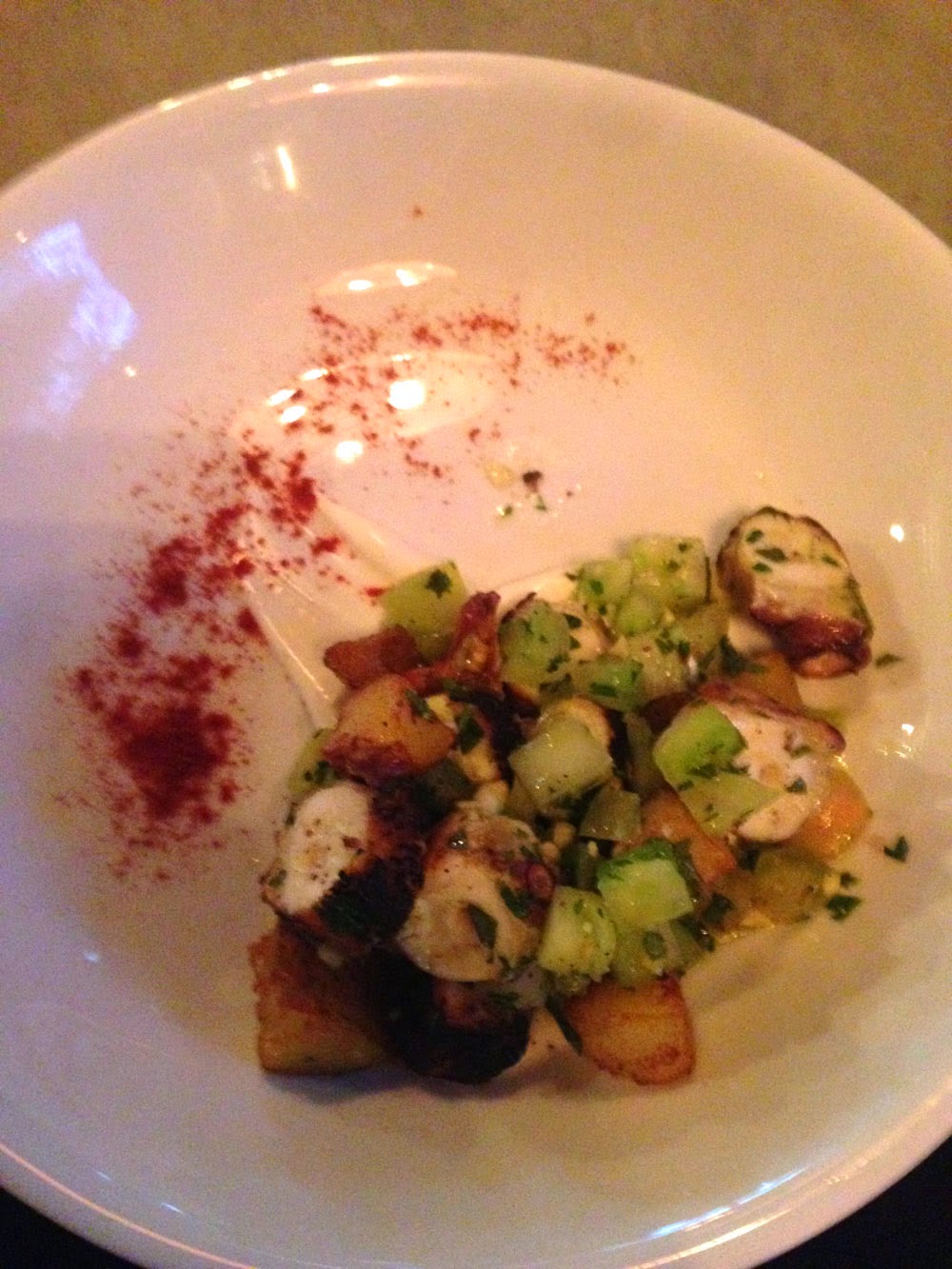 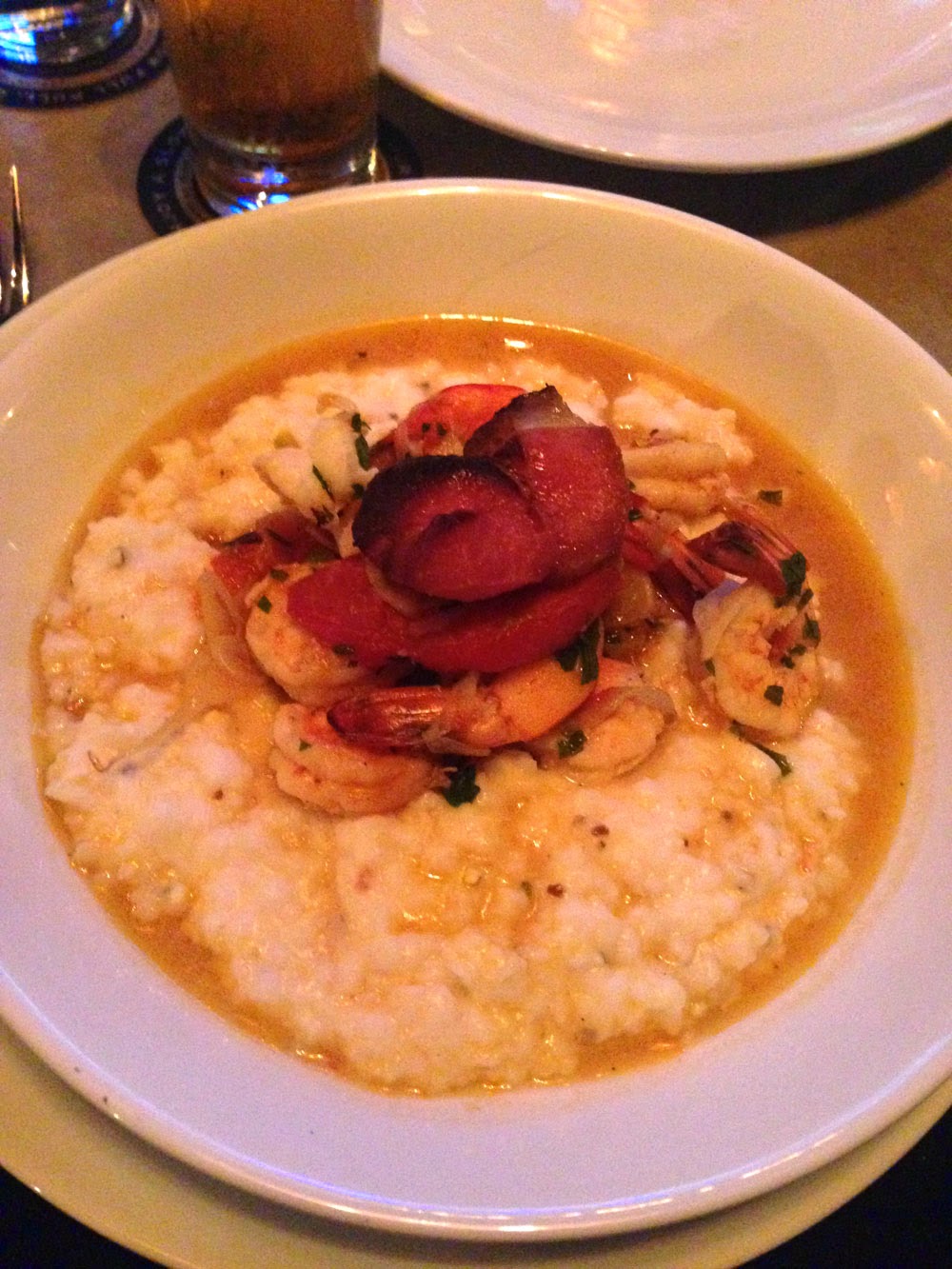 GA Shrimp and Grits: Leeks, Fennel, Overnight Tomatoes, Fines Herb, Crispy Smoked Pork Belly
OK, I'll admit that I'm a sucker for grits dishes prepared with seafood - back when I was at Indigo we had a Low-County stir-fry on jalapeno-cheezy grits that sold me on this type of dish. This was very good with just the right amount of smokiness from the pork belly (in my photos that's the nub sitting on top). 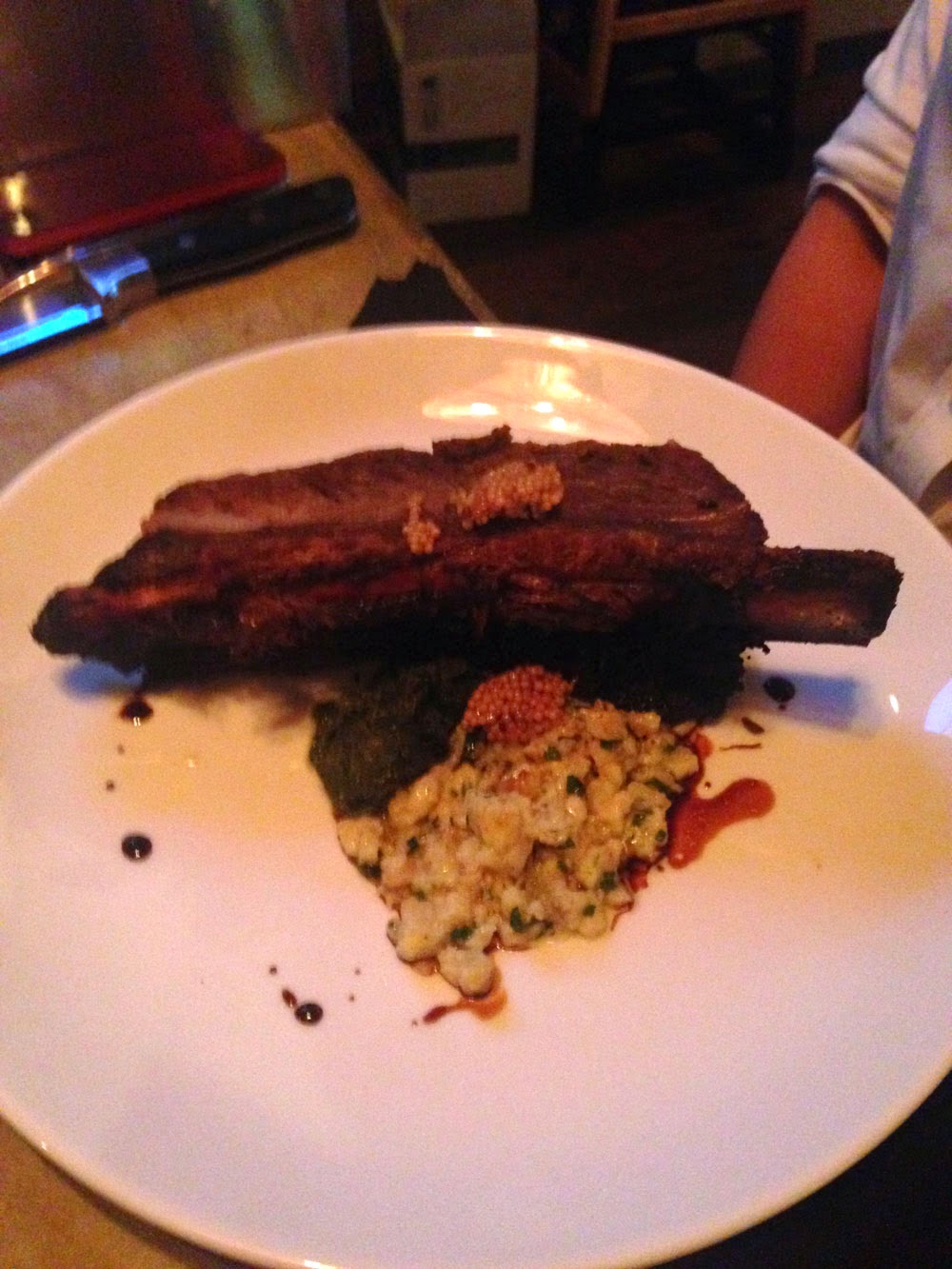 Smoked Bone-In Short Rib: Herbed Spaetzle, Shallots, Mustard Greens, Pickled Mustard, Jus
Now this dish basically rocked my world - somehow Southbound has managed the impossible - the meat was fork tender and basically ready to fall off the bone, and yet it wasn't dry and had an amazing amount of smoky flavor. Simply delicious. I do wish the garnish was a bit larger but I won't quibble - this is a must try. 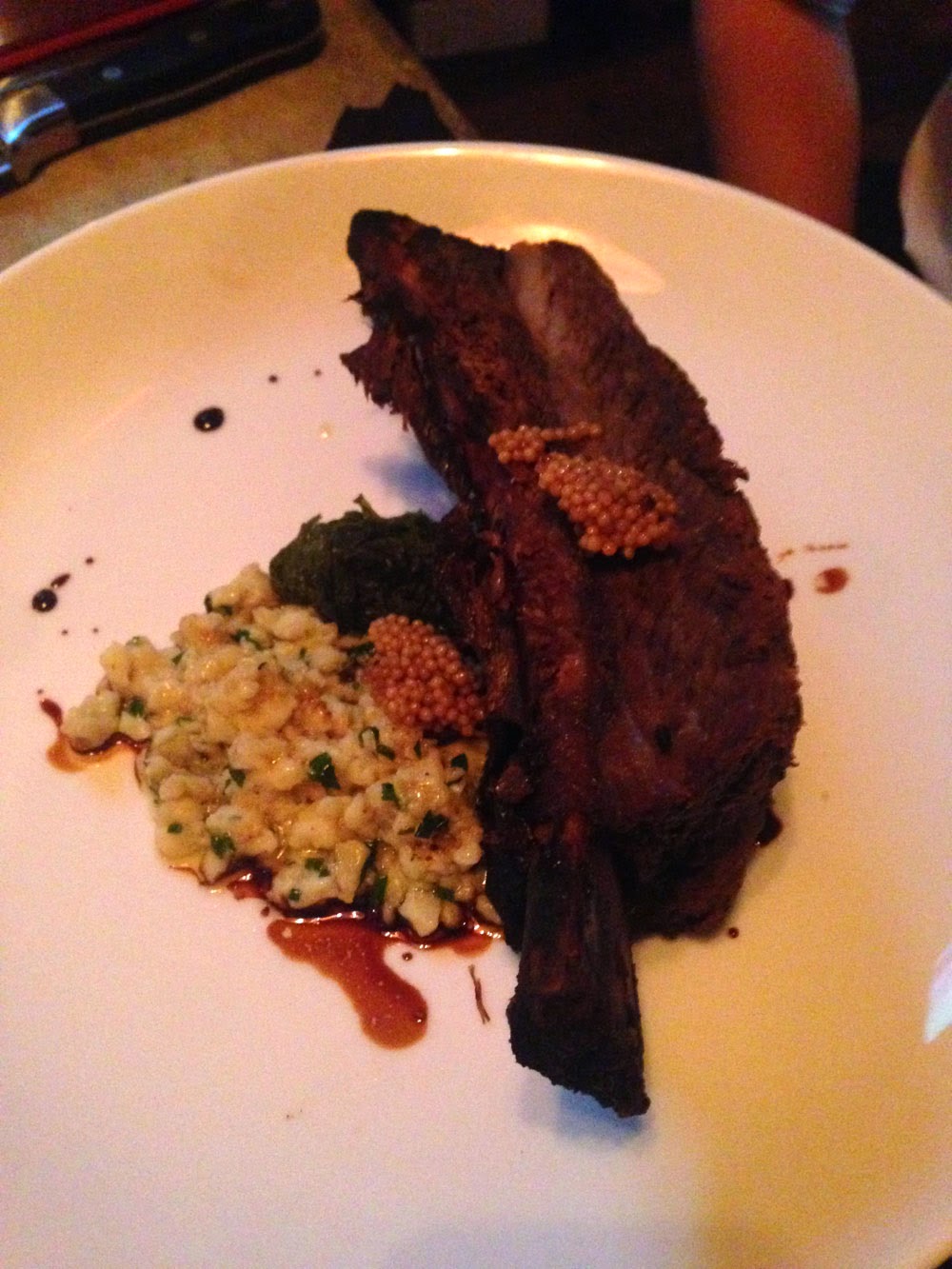 The service was really amazing with plenty of people coming by to check on us - the bartenders were very attentive as the restaurant filled up (they became quite busy), however there was no slighting us as we spoke with several patrons. The attitude of everyone we met was very upbeat - and Chamblee certainly deserves this fine upscale establishment. I'm glad to see that Chamblee is starting to come into its own when it comes to dining (sure there are plenty of Asian nearby and Buford Hwy is close, but Southbound shows what can be done in an otherwise ignored corner of small-town, ex-industrial suburbia).