(Also posted to Yelp)
Based on several recommendations from neighbors, we decided to do Sunday brunch this past weekend at Roxx Tavern, newly opened (about a week) on Northlake Pky on the Eastern side of I285. The business is an extension of the established Roxx Tavern on Cheshire Bridge Rd and a welcome addition to the Tucker/Northlake area. The building is so newly inhabited, that it was nekkid of the usual signage (there was a banner near the curb, obviously temporary). 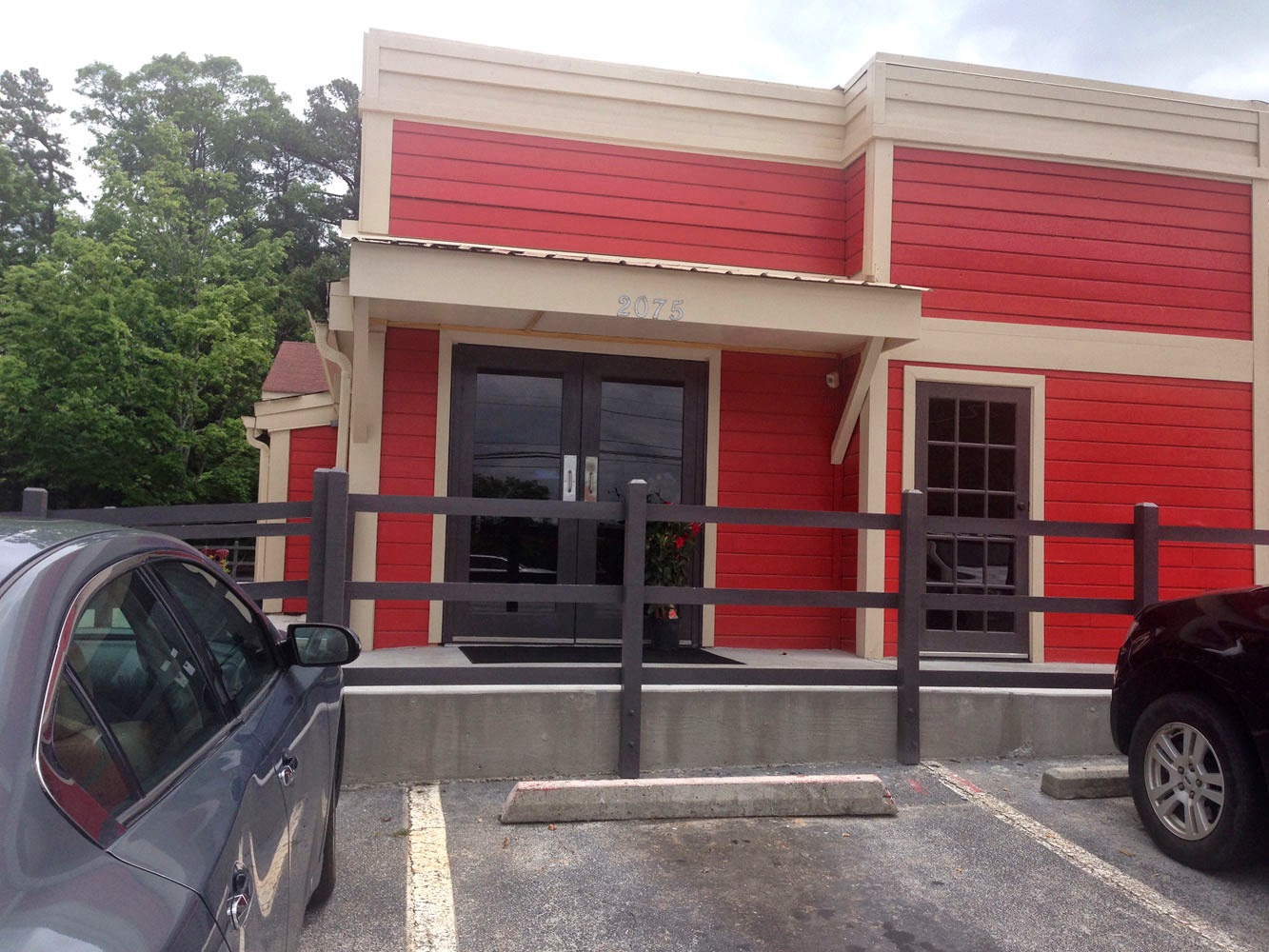 Previous to being Roxx Tavern, this location housed the ill-fated Twisted Taco (worst margarita I've ever had, bar non) and originally a Chili's. It's located across from the O'Charley's Restaurant and near both Piccadilly Cafeteria and the LA Fitness (I'm sure many of my friends that work out at that location will become regulars). 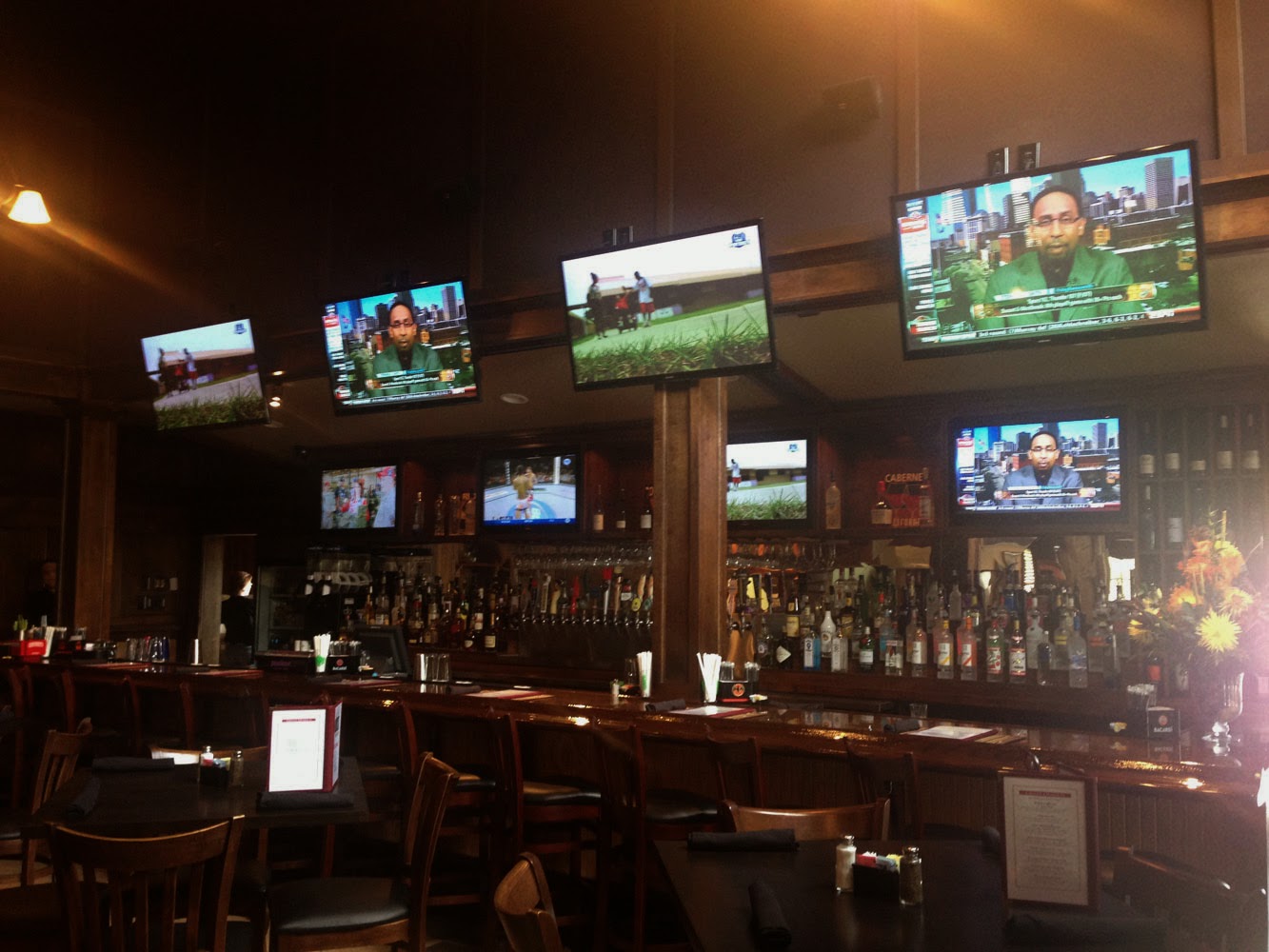 As sports bars go, the interior is a bit upscale with nice wooden trim, new banquettes and a wide bar with flat panels to view you're favorite teams. Here are some quick shots of the menu so you can get an idea of what they offer - I hope to get back in the evening for a better idea of their food - they do appear to have some items you don't typically see in a bar/tavern environment, so I'm hopeful that the food will meet my expectations - I was certainly impressed by their brunch (enough to do a first-visit review, at least). I typically wait a few visits before submitting a review as newly-opened visits tend to be a bit "iffy" - I'm happy to say I really enjoyed my brunch. 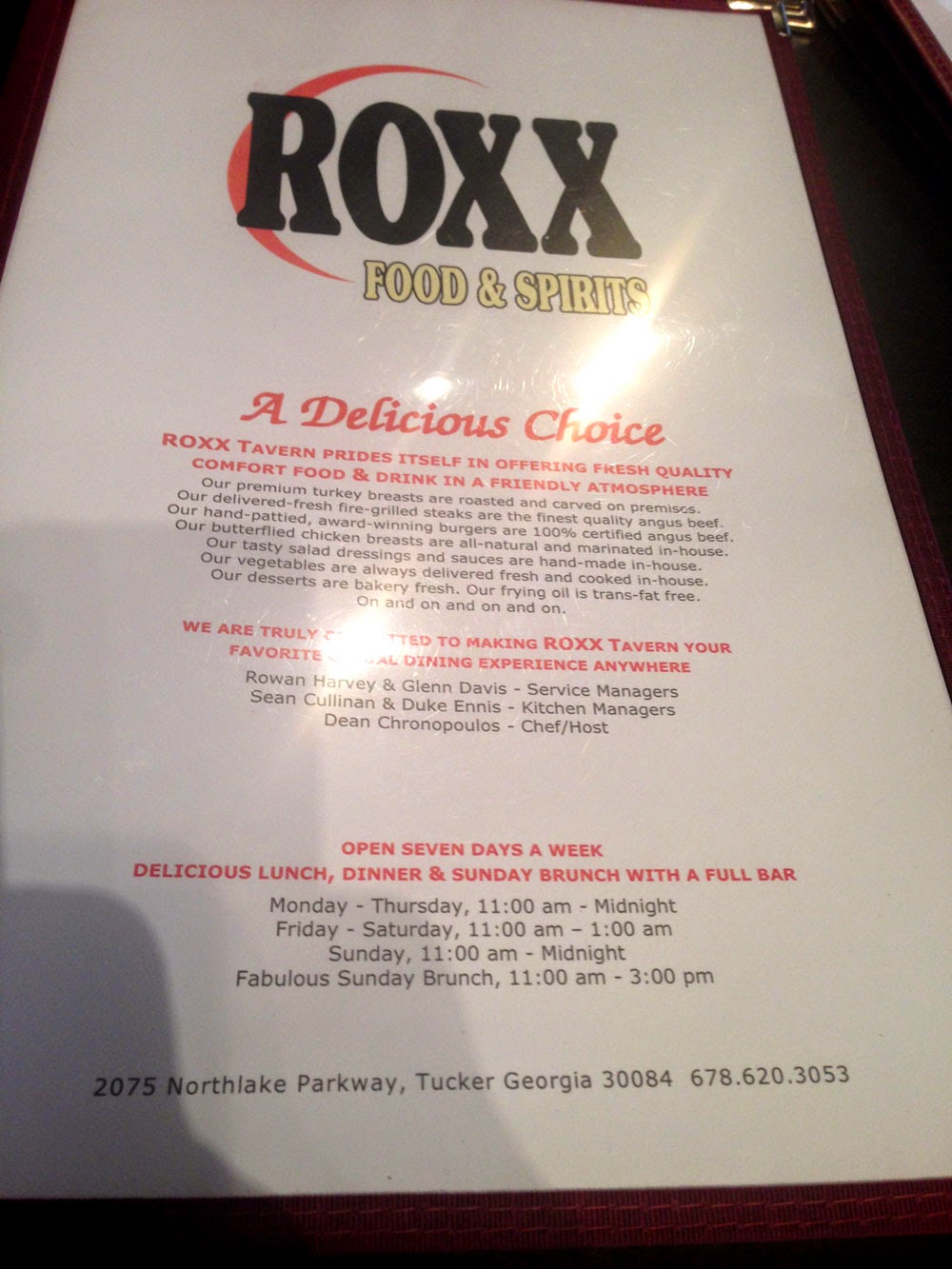 First, the hostess was very good and we were seated immediately - our sever Tay was exceptional and very personable - the food came out quickly and she knew the menu well, considering the restaurant was only one-week-open. We ordered coffee and water while perusing the menu - the coffee was good (not great, but I like very strong/robust coffee) and hot if a bit weak for me, preferring the stout stuff. Tay came by several times to check on us and provide coffee refills - the manager also came by which was more than we expected - in all the service was above par. The place filled up quickly and was very busy - I think we sat through two turns. 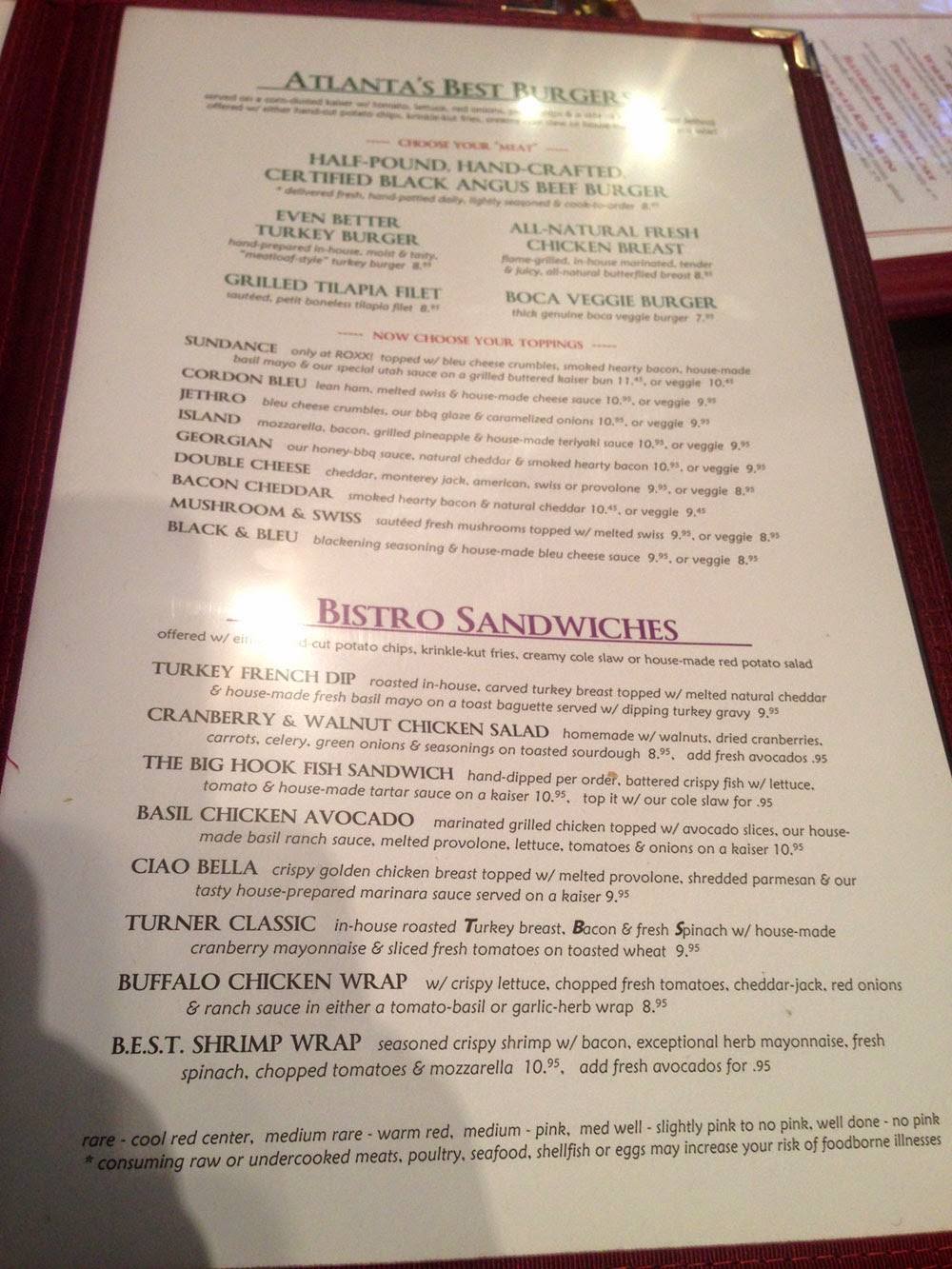 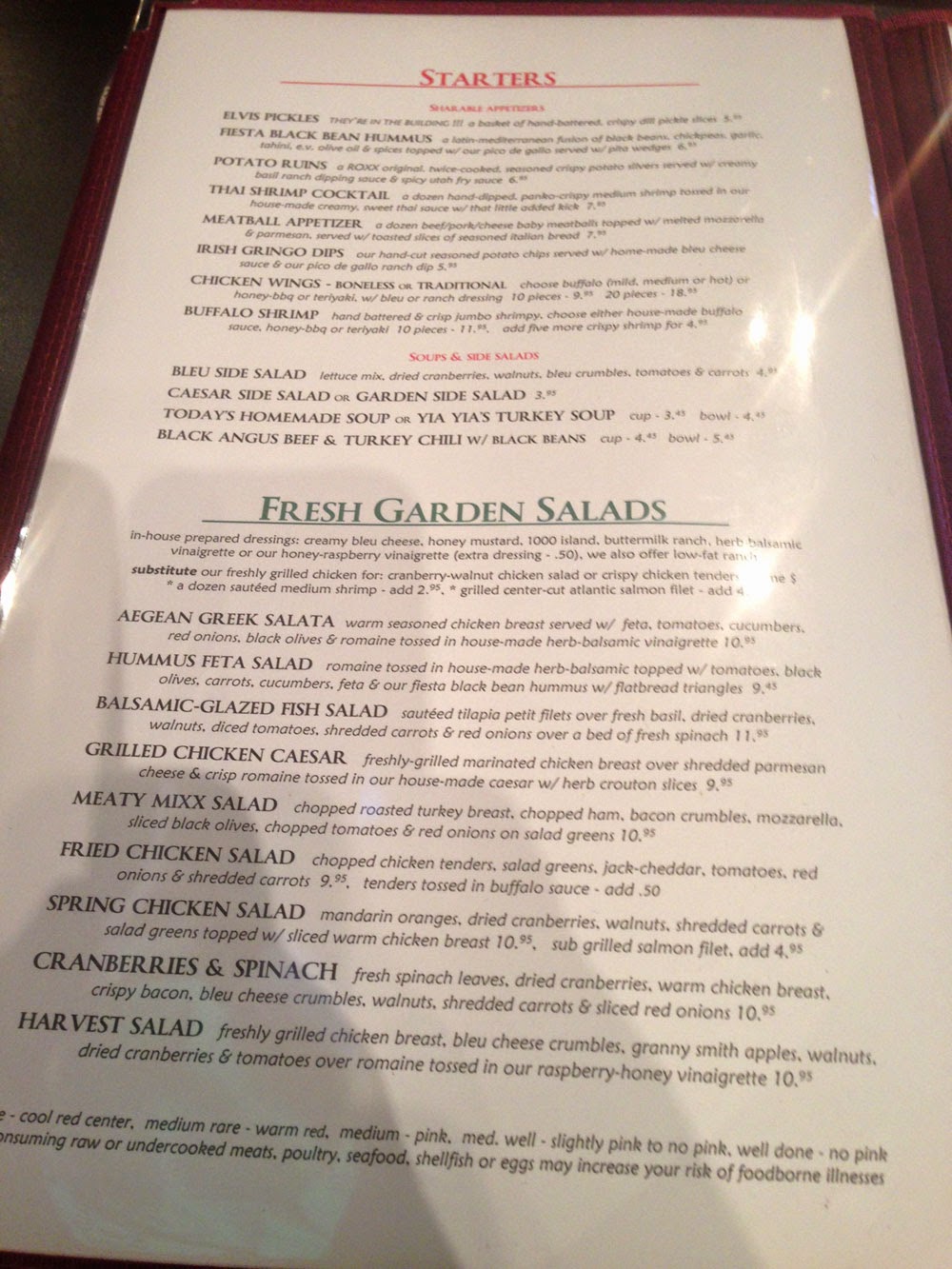 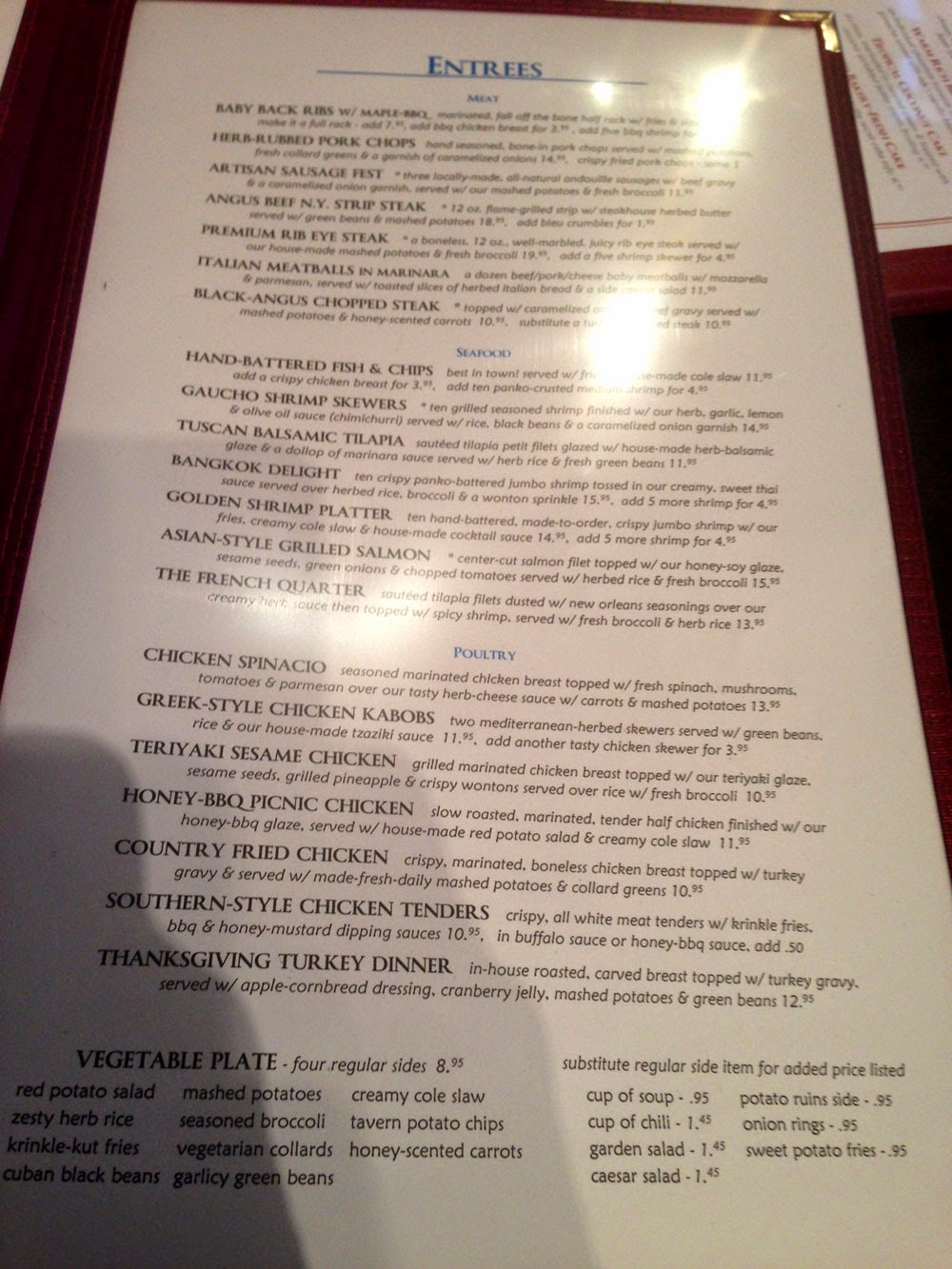 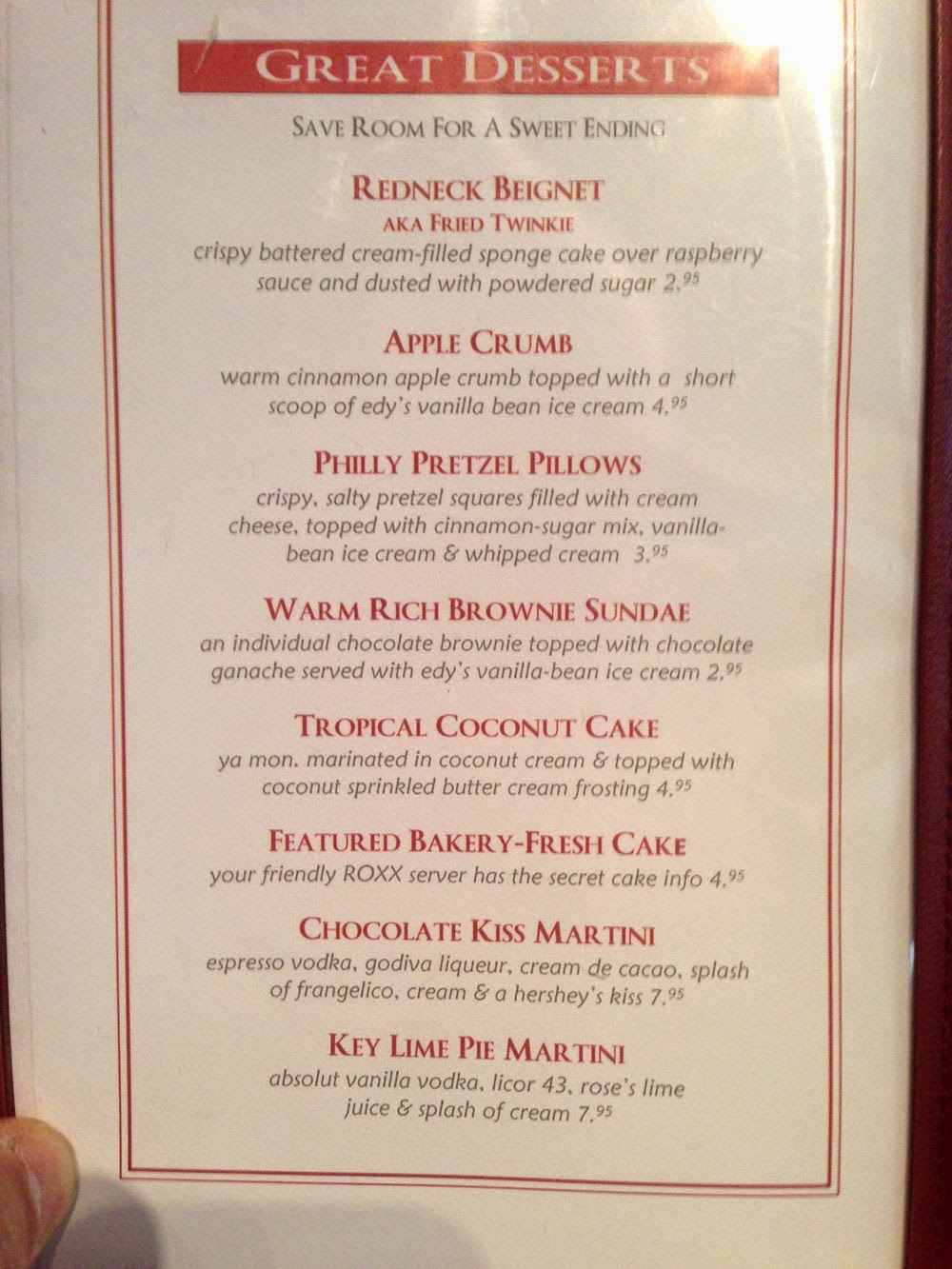 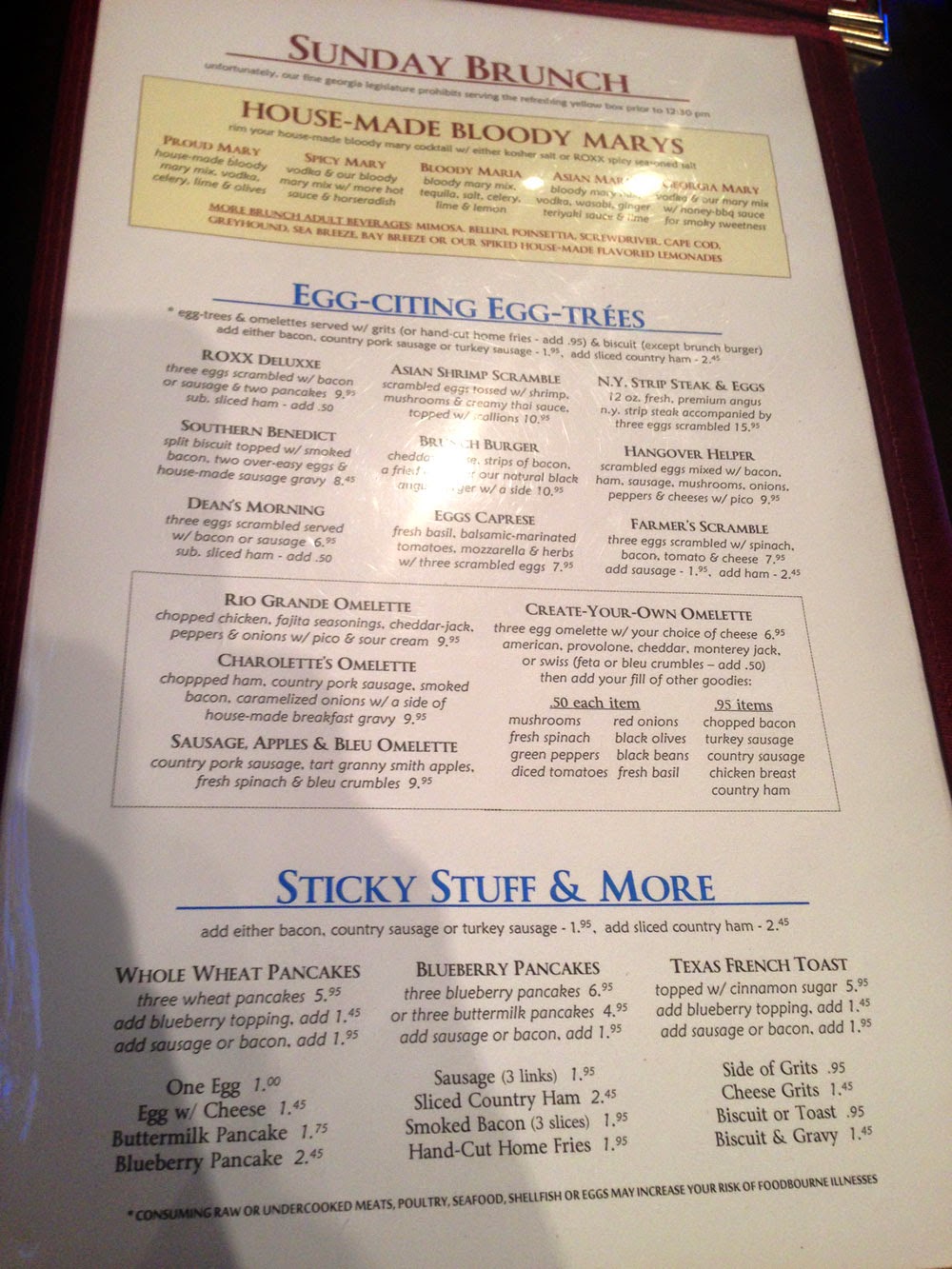 The menu featured several variations of one of my favorite drinks, the Bloody Mary (think this is a brunch thing but when isn't it a good time for a Bloody?). Unfortunately we were a bit early to drink alcohol (DeKalb county is after 12:30 PM) but I'm sure these were good based on the descriptions. The brunch menu had several options featuring many omelet and scrambled combinations. I decided to go with the Roxx Deluxe described as "three eggs scrambled w/bacon or sausage & two pancakes $9.95 sub. slicked ham - add .50" All breakfast items also come with a biscuit and grits. Instead of the scrambled I got the eggs over-medium and subbed the whole wheat pancakes for the regular. My dining companion ordered the same thing. 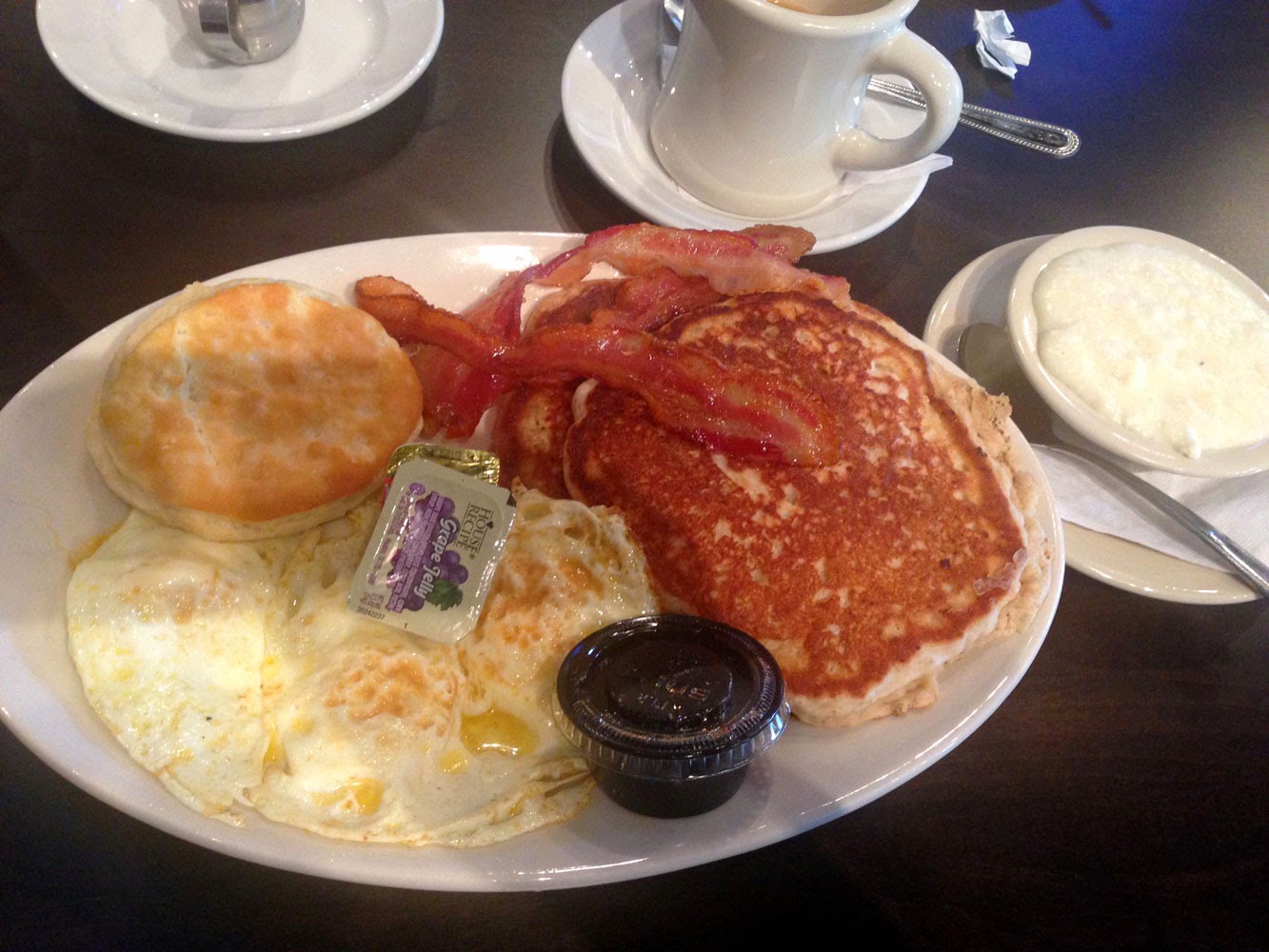 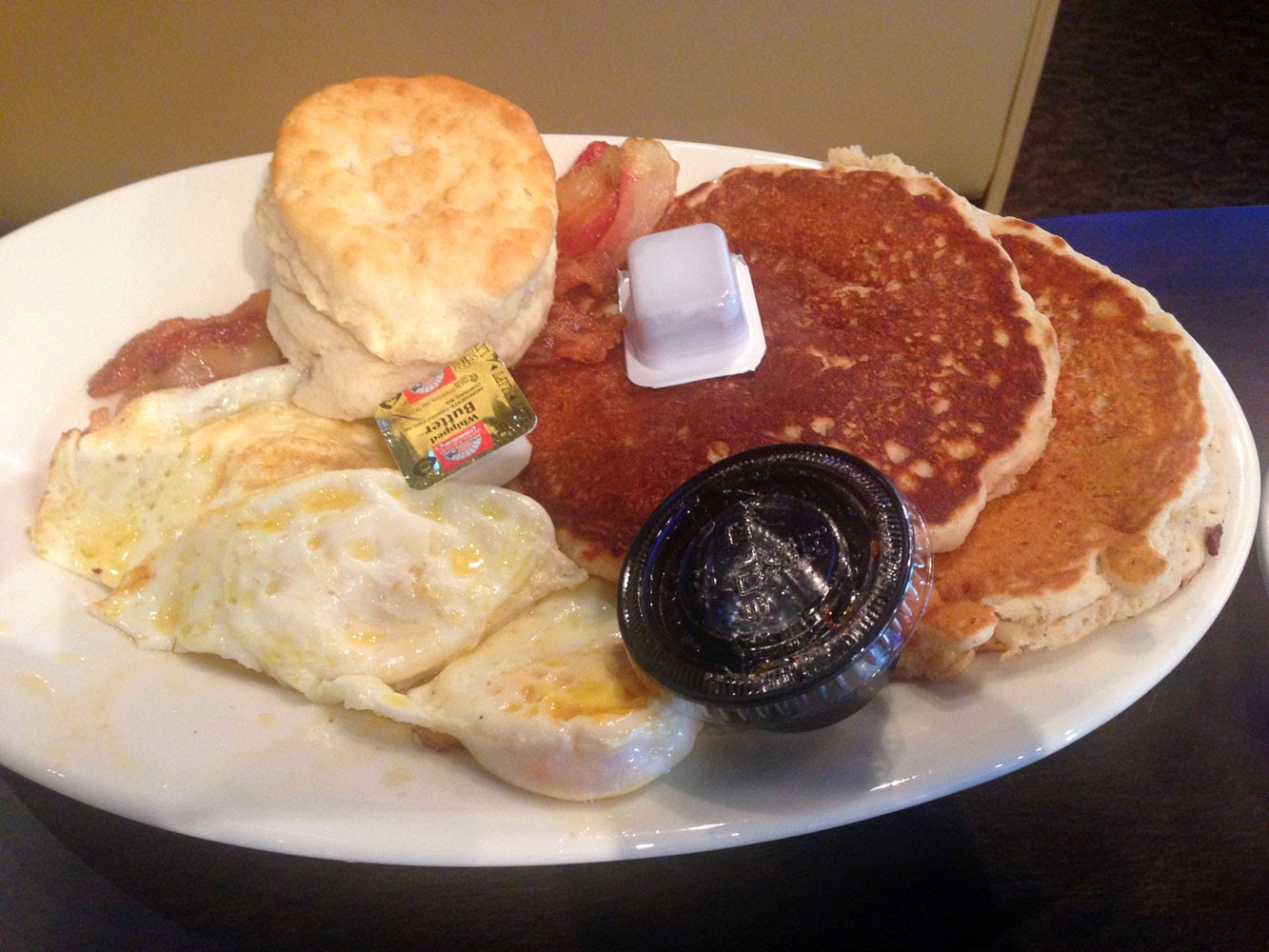 Both of our eggs were over-cooked (I was fine with mine but my dining companion returned hers, which were immediately replaced with eggs perfectly over-medium). After working in restaurants for 10 years, I can tell you that eggs are tough - I had to sit at the Waffle House counter for several hours to learn how to do them right. They were quick to replace them so bonus points there.

What was really exceptional to me was the food itself - these were actually the best grits I think I've ever had - extra creamy, not salty and downright delicious (and I'm not a huge grits fan) - these had more of the consistency of cream-of-wheat, without the starchiness. The biscuit was good and not over-worked, so flakey; and the wheat pancakes were exceptional. I left very satisfied and ready for a nap!

In all, a very good brunch indeed - I'm looking forward to returning to try the evening faire.