(Also posted as an update to my review on Yelp)
I've been frequenting this Willy's pretty much since it opened (I've worked across the street at the Concourse a few times) - this location can be found in the shopping center anchored by a Publix at the corner of Hammond Dr and Peachtree-Dunwoody Dr. There are also a couple of other restaurants in the same location but Willy's is by far the best of what you'll find there. Be warned that the smallish parking lot fills up quick during prime-time (lunch - I always try to arrive around 11:30 to beat the rush) as there aren't many options within walking distance of the large Concourse complex. 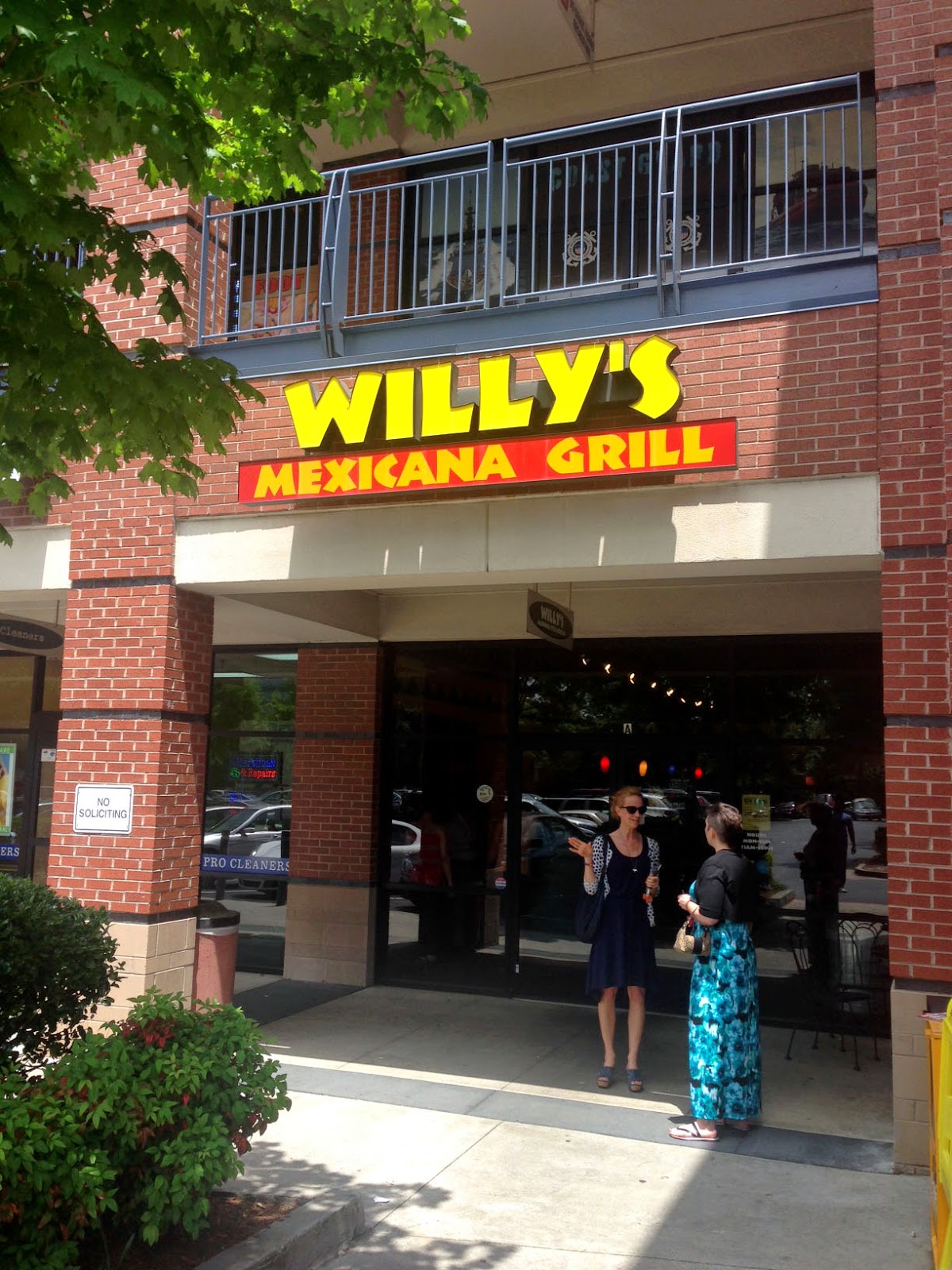 I had actually already reviewed this location on Yelp back in 2011:
http://www.yelp.com/biz/willys-mexicana-grill-atlanta-10

Atlanta's original "California burrito" place (I'm not sure if this term is actually used any longer but it's what we called it in the 90's - I believe its roots was in San Francisco's Mission district) was the Tortilla's on Ponce (now long gone - it was famous for the gigantic "build it" burrito's and the green sauce (a recipe to the original Tortilla's sauce can be found here: http://projects.eveningedge.com/recipes/green-sauce-tortillas-ponce/). There have been many copies - Moe's comes to mind, but in my opinion Willy's pulls it off better than any other local chain. The first Willy's I came across was on Roswell Rd near Wieuca (Hi Willy!). I'm not sure if it was the first but it's the first that I recall. At the time (mid 90's or so) I thought it was good but still missed Tortilla's - hard to give up on your first love I guess. The concept has changed a bit since then (they no longer have the different sizes like Tortilla's) but the quality of the food and service are still quite good.

Highlights of what I like best about Willy's include the Habanero salsa - warm but not blistering with that great habanero flavor. The tomatillo verde (it's not the same as Tortilla's but in many ways it's probably better as it tastes fresher). And finally, the burittos, the salads and the nachos.


Willy's uses a counter-ordering style that has become popular all across the US - sort of "fast-food but better"  with an approach that has simplified the menu to make it more assembly-line style. You choose a product, a meat, your beans and then it gets passed to the next person who "dresses" your order with particulars (toppings, salsas, etc). You continue along the line until your food is ready and can optionally add free chips/salsas, a cookie and a drink. You pay when you pick up (make sure you tip at least a buck), grab your salsa's, citrus, napkins and fill your cup, then search for a seat. Even if all the tables are full there's usually an opening within just a few minutes as most of the diners are cognizant of people waiting for a table. If all else fails walk outside and sit at the tables in front of the shopping center's "elbow" near the Publix main entrance (great place to people-watch so bring your sunglasses).


The burritos at Willy's are just plain fantastic. I usually fill up on black beans (passing on the rice - it's just too filling), spicy chicken, lettuce, pico and both kinds of jalapenos - you can add sour cream and/or guacamole for an extra charge. Do the "burrito in a bowl" if you don't want the calories or carbs in the wrap.


My next favorite thing used to be the salad but I've since switched to the Nachos. These are hands-down some of the best nachos I've ever had, and that's saying a lot. Same great ingredients but now covered in melted cheese (these come with sides of salsa, quac and sour cream on request for no extra charge). To really fill up - and believe me these are already very filling, do the double meat option.

The salad I feel is one of the best, most filling items on the menu - it's basically the ingredients of a burrito laid on a base of romaine lettuce (add cukes and peppers) - I usually forego the dressing (however the Chipotle is quite good) as I like the habanero salsa on mine and it becomes a bit too wet.

I also like the quesadillas quite a bit for something different - these also come with a free side of salsa, guac and sour cream on request.


Did I mention that Willy's also has a good beer selection? Anyplace that serves 420 is AOK in my book. We've also catered from Willy's on numerous occasions and have always had a great experience. You should too! 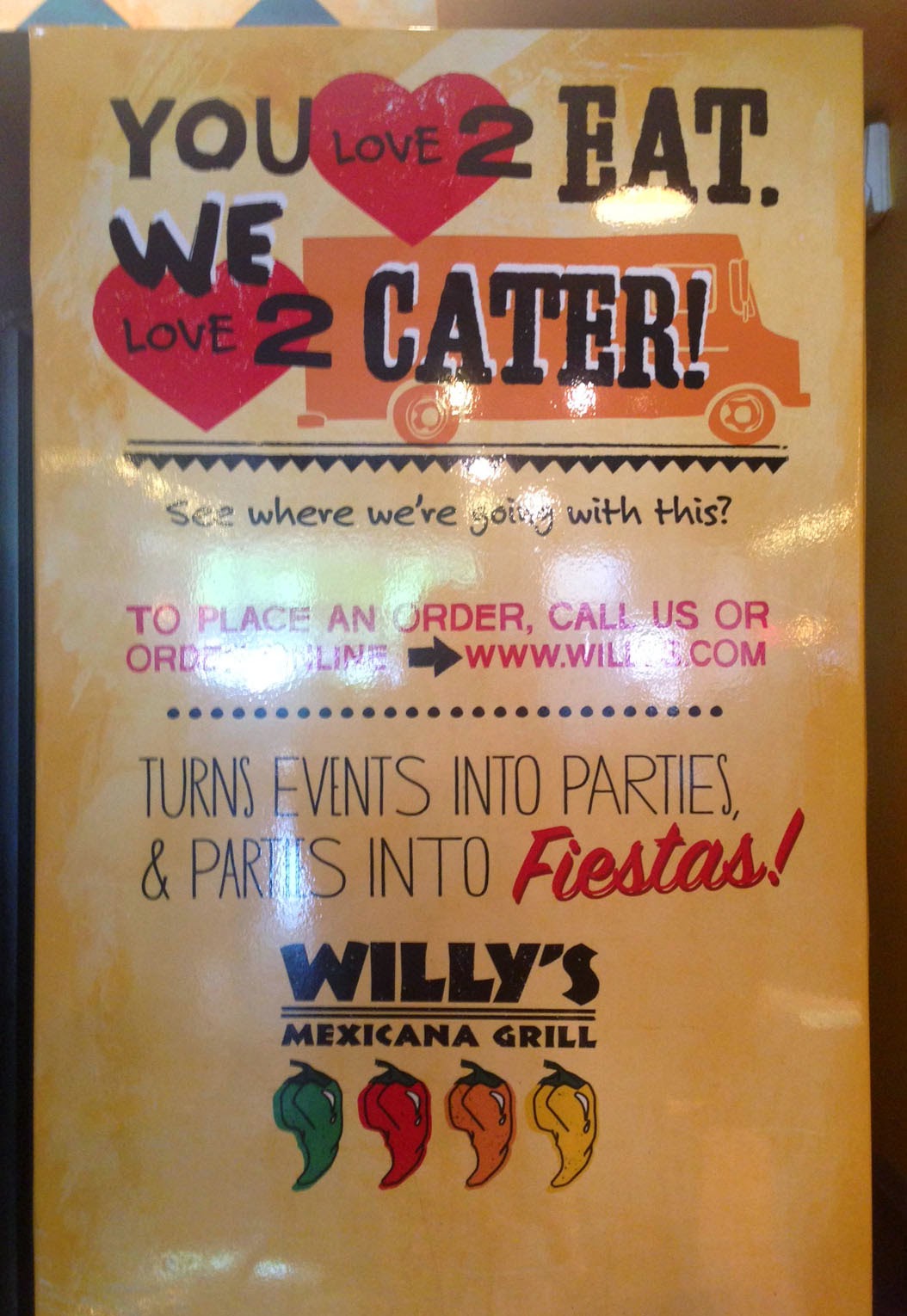 In conclusion, if you haven't tried Willy's and are a fan of this style of food, what are you waiting for? Much better than Chipotle or Moe's.